Once in lifetime?  Winning the Golden Wing on a very heavy Barcelona in one week and winning the first national on a very heavy race from Tarbes is only given to big cracks. The Cousaert-Willems tandem from Maarkedal and the Cousaert family can chisel this experience on their palmares. Impressive, something that makes your legs tremble and emotions come up.

Party for the Golden Wing

Last Wednesday, we were present at a very nice and cosy celebration for the winning of the Golden Wing of the Brugse Barcelonaclub. There were a lot of beautiful long distance pigeons from the region present and everybody was very happy with this result.  Many looked back on the past flights in long distance, others did not hide their ambition for the future. Georges Cousaert, in all his modesty, was very happy with the Golden Wing and could only say that his pigeons were "good". But what is good in pigeon sport and that for a race from Tarbes in difficult conditions.

The improbable became true, 1st national with Piet
The pigeons were released in Tarbes instead of the planned Sint-Vincent. Due to heavy fires in the Bordeaux area and the mouth of the Gironde, the organisation was forced to move a little further inland. This avoided the risk of the pigeons ending up in the smoke plumes of the fires.  It turned out to be a wise move. It would be a tough, difficult and fair race. That was clear beforehand. Warm weather, mostly northern wind and in some places (especially in the south of France) very high temperatures.  Real pigeon weather on which you can base a selection. A calculation after the first registrations in Northern France taught us that it would be a close call for Belgium.  The night falls a bit earlier and then it's up to the really motivated ones to get home or not before dark. Great was the surprise in Maarkedal when at 21.46 minutes they saw a bolt storming towards the lofts above the entrance building. It was their first released pigeon Piet that arrived and immediately sent the adrenaline sky-high. Fresh as a kitten after such a long and difficult race, he came home. The first and only report in Belgium stayed on the screen for quite some time, which made us hope that it would remain a top pigeon. Only one hour later, at 22.45, a second Belgian pigeon came home, from Erik Demeulemeester in the neighbouring town of Oudenaarde.  More pigeons did not get home on Friday in Belgium.
Then it was only a matter of waiting until a few hours Saturday morning to be completely sure of the national victory. This victory was no longer in danger and an unlikely exploit was realised in Maarkedal. Piet won the 1st prize nationally from 2,899 pigeons and covered the 888 km to his home with an average speed of 1,025.98 km per minute. An impressive performance. Winning races in these conditions at an average of 1,000 metres a minute is only possible for very strong pigeons.

Piet is a three year old cock. It is a shell-shaped pigeon with a very soft plume (this can also indicate his super condition...) with a very expressive white eye.  It is a very quiet pigeon on the loft who likes to stay in his nest box.

He lives in a loft where only a few pigeons live and one of his loftmates is none other than the Geert who won the Golden Wing Barcelona. Talking about a golden loft....

In the past years Piet flew

Wout is the father of Piet. Wout is a son of the Super pigeon owned by Willy Maes from Zwalm.  A really strong all-round pigeon with top performances on the heavy middle-distance and long-distance.

Wout was coupled to Nadia. Nadia is the breeding result of his own topper from Sint Vincent (1st provincial and 6th national) and the very noble blood of Odilon (the top pigeon Barcelona of Odilon and Solange Decuyper).

So he has not got it from strangers and in his ancestors the best long-distance blood is contained.

Piet was played on classical widowhood and the performances on the lofts of Georges clearly show that forme can be a miraculous thing. Two pigeons who can achieve such a result with an interval of 1 week, is only possible for the great champions !

Congratulations from the Herbot team ! 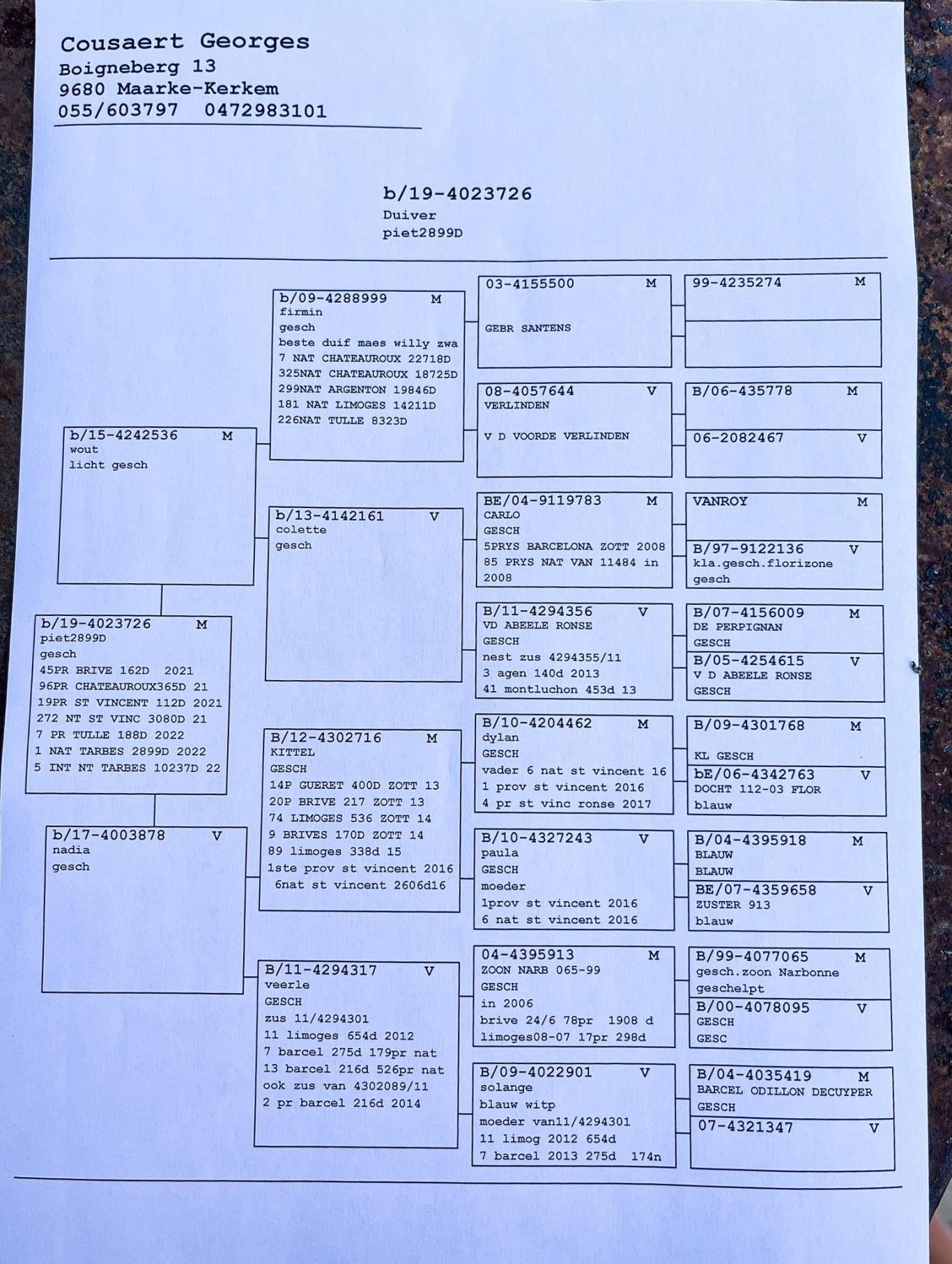