Zulte: What a close finish to know the national winner of Souillac yearlings. Both Lefebre Bernard (Zulte) and combination Faes Gebroeders-Wils Albert (Mol) clocked a pigeon at an average speed of 1224.84m/m. So for the organisers there was nothing else to do but to calculate to 4 decimal places and then Bernard Lefebre emerged as the winner.

Bernard Lefebre is known in Zulte and the surrounding area for his wonderful garden centre. Together with his wife, they have been building up a good name and fame for years and they have more than succeeded. Both garden and animal lovers (including pigeon fanciers) can come to them for all advice, food and supplies.

But besides running a busy garden centre, Bernard is also a fanatic pigeon fancier. As son of the famous tandem Lefebre-Dhaenens it could hardly be otherwise. Bernard: "Here the pigeon sport is perfectly combined with the business and the family. I only race every 14 days, so 1 WE is dedicated to the family and the other weekend I race pigeons. This goes for the old, yearling and youngsters. Now I must say that racing with the youngsters is not on number 1. For us, this is the ideal solution and it also works out this way, because the last few seasons I can't complain at all about the performances with of course this national victory as the proverbial cherry on the cake.

"The pigeons of my father Roger are the basis of my current colony" Bernard tells further "and I have completed this with direct pigeons from Raes Willy, De Meulemeester Johan, Eric De Clercq and Willy Baert.
I prefer to race with widowers and for this I have a team of 38 cocks. The widowers were used for winter breeding and afterwards they were not paired anymore. Only during the training, several times a week, their hen is put half-box so that the widowers will enter easily when they come home.
As far as feed is concerned, I use the "Lefebre mixtures" which I mix myself. First, a sports mixture is given and then a protein-poor mixture is put in the feeder. The last days before the race, they are fed with the sports mixture again.
From a medical point of view, everything is kept to a minimum. Next to the yellow drops (against tricho) "Trio Mix" (Red Animals - a mix of herbs, essential amino acids and organic acids) is given regularly and when coming home, electrolytes are in the drinking water.

And then we arrived at the national winner from Souillac. "Tielo" (B21-4077075) was not only the fastest in his category but showed all 9,113 Souillac racers his tail. "He came perfectly from the direction" Bernard continues "there was a strange pigeon with him and because of that he made a few more revolutions. Unbelievable that it is now such a "close finish".
"Tielo" is a cross of direct pigeons from Tielemans and De Clercq Eric (Nevele). The father comes from fancier Tielemans and is in fact an “lost pigeon”. I reported the "lost son" but Mr Tielemans could not pick him up. "He is a cross between the top breeding lines of Engels and Van de Wouwer" he said "I will send you the certificate of ownership and breed from it". No sooner said than done and see....

Bernard...congratulations with your 1st national victory and lots of success! 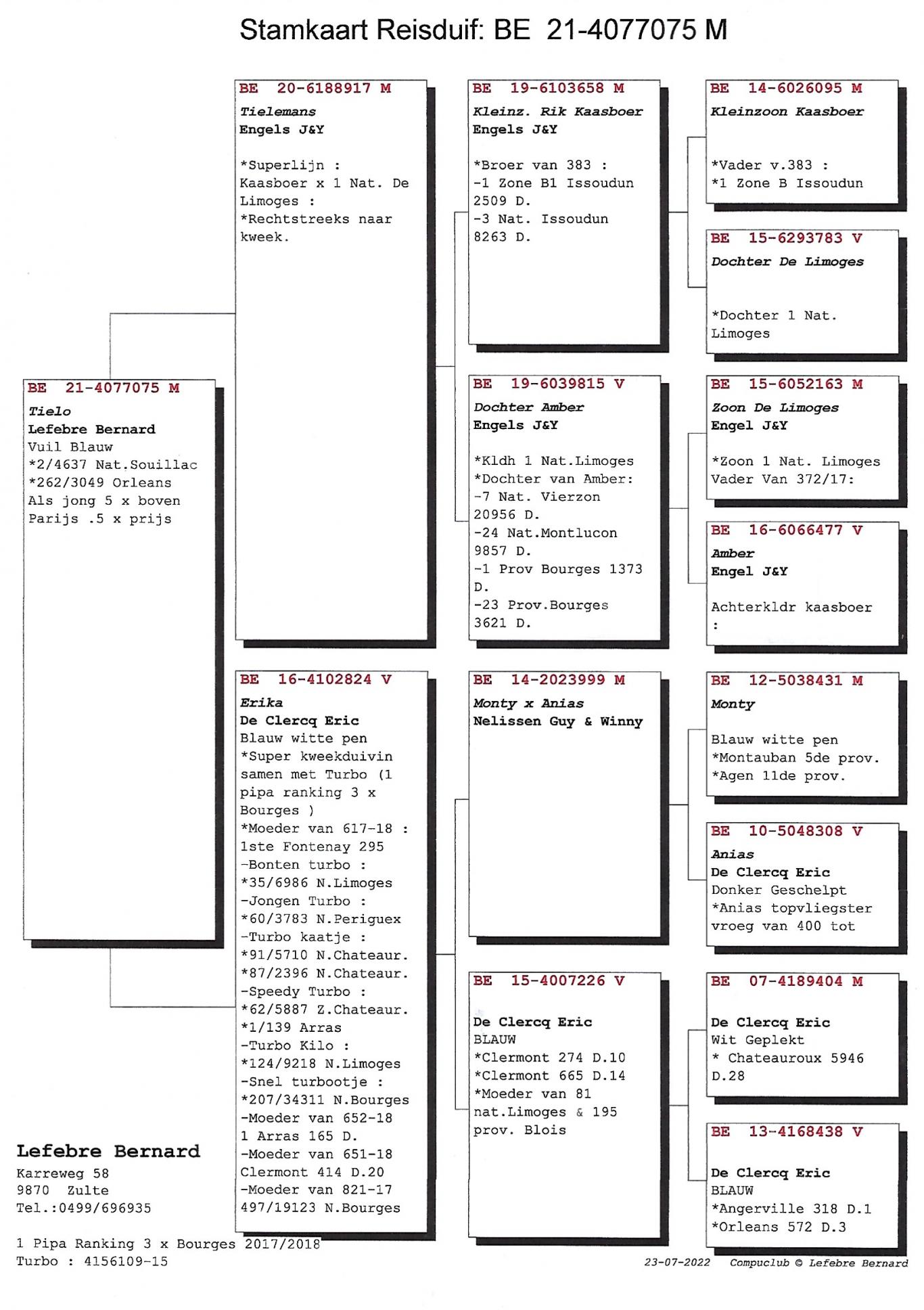