The second national race from Argenton for the youngsters had to deal with a week's delay due to the heat wave of the week before. Normally Saturday was the best flying weather you could imagine, but again clouds threw a spanner in the works. The pigeons were therefore given freedom on Sunday and we could find the fastest young pigeon in the tandem Hok Van Den Bruel in Itegem in Antwerp. It was a neck and neck race against Roziers – Xiang but the winners are Kurt and Ruben Van Den Bruel.

Their young hen is also the fastest of all 28,035 pigeons that were released in Argenton and for them the best victory so far from their still early pigeon career at this current address.

The youngsters are weaned and the 1st and 2nd round is separated, when they all eat well and are no longer on the ground, the sexes are already separated. That is very fast, but we do this like Jelle, there are no boxes in the loft but only planks on which they are motivated. Because there are still no couples.
They are darkened from the beginning of March until the longest day and lighted from about 8 to 10 days after the darkening has stopped. We keep this up until the end of the season and then they can moult.

The pigeons train once a day and this is always in the morning, before the season they train hard, but now we are happy when the cocks fly for half an hour and the hens for an hour at the end of the week.

Training is important for us and for the system, the youngsters are trained here at least 20 to 25 times before they fly their first Quievrain. This year they flew 4x Quievrain in quick succession with midweek flights added and afterwards 2x Noyon, 2x Melun and then Bourges. After Bourges they flew Noyon and last week with the heat they stayed at home. We then drove up to 50km on Sunday morning for the pigeons from Quievrain and so had to come home elsewhere.

Driving in the week is done here max once a week, sometimes there are also weeks when that will not happen, as now after Argenton that will not be the case.
The sliding door principle is not actually used here, because the pigeons separate so quickly after the flight that they are not yet recovered before we separate them. At Noyon this is 15 to 30 minutes, now at Argenton it is about an hour and a half, but then they don't have the desire to mate yet. They also do not see each other during basketing.

In terms of nutrition, we feed completely the Aidi Vliegmix 1 – 2 – 3 mixtures and the advice of Jelle is followed every week. When they get home they always get Vliegmix 3. We also use full Aidi in terms of products (Condition Booster, Health Elixir, Pro Bacterial, Omega Plus Oil and Recup Fast). The day of basketing they always get clean water.

The lofts were adapted in 2020, there were runs and all ceilings were opened. The loft is therefore completely open and the rear of the roof is well insulated against the heat. Everything is open with good or bad weather. The pigeons are very healthy and are only vaccinated against paramyxo and smallpox, the strongest will survive. In the field of tricho we often use the yellow drops and almost never cure. With 1 night power, the yellow drops go over the food 1x a week and with 2 nights in the basket they get one in the nose weekly. When we have driven a lot with the youngsters, we dare to do this over the food for a few days in a row.

Kurt and Ruben, congratulations on this fantastic victory from the entire HERBOTS TEAM. 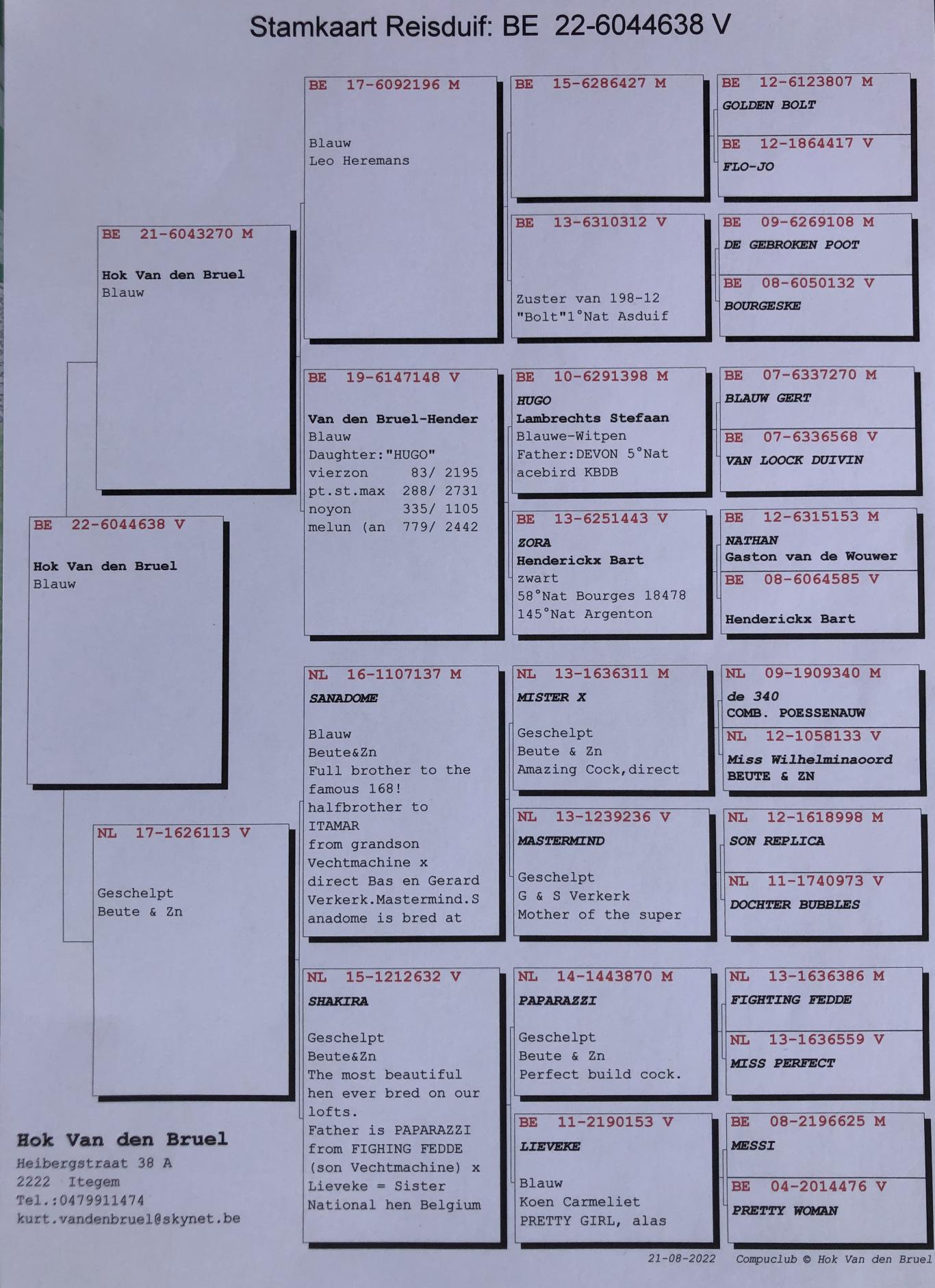