Deftinge: The edition of this national race will not go down in history as an "easy" race. Not only were there high temperatures (+30 degrees) but there must have been some other obstacles as well, because in the evening all the fanciers had more than too many empty lofts. Fortunately the night brought some cooling and rain so the next day most of the pigeons reached their home base safely.

Introduction:
In 2018 Marc came to live in Deftinge and since he had a past where pigeon racing played an important role, he also set up the necessary installation in Deftinge and focused fully on pigeon racing. Marc is a driver (container transport) and every spare minute goes to his winged friends whereby he has the support and assistance of his daughter Angie.
Marc fully enjoys pigeon racing and the fanciers from the region of Lierde and Geraardsbergen know that it is "eating bad cherries" with this daughter/father combination.
Marc: "we have a group of 36 couples that are played on total widowhood. Of the 36 hens, only 15 are played. My cocks do better than my hens. Personally, I think I am still in my "construction phase". After 4 years of breeding and playing, I can finally start to select more strictly. I play from Quievrain (45km) till Limoges, in other words... it's not so easy to get this "all-round pigeon" on your loft.

National winner "Joske".
Marc continues: "As a basis I have pigeons from Gaby Vandenabeele and Jos Thoné. My national winner was born on the loft of Jos but got one of my rings around his leg and once weaned ready he moved from far away Limburg to Deftinge.

"Joske" is medium type and a rather nervous pigeon. Since the pigeons from Sermaises did not fall easily, I had not yet expected the pigeons from Argenton. I was at the youngsters loft when he suddenly fell on the sputnik in the company of a strange young pigeon. Fortunately he went in very smoothly because the competition was very close on his heels."

System
As preparatory races, 2x Noyon, Ecouen, 2x Sermaises, Orleans, Vierzon, Bourges and Chateauroux were flown. At basketing, cocks and hens meet from 15 minutes to half an hour. After arriving at a race, the get-together can vary from four hours to the next day. On arrival of a race, the pigeons are fed sports mixture + Tollya minus Forte in the drink. This is followed by two days with a light mixture, then a day with 50% sports mixture + 50% light mixture and then a day with 100% sports mixture. The medical supervision is limited and before the start of the season, they were treated against trichomonas for eight days and against respiratory infections for eight days.

Marc and Angie...enjoy your first national win to the fullest and now on to the next. It is warmly wished to you.

Winner is born at Jos Thoné 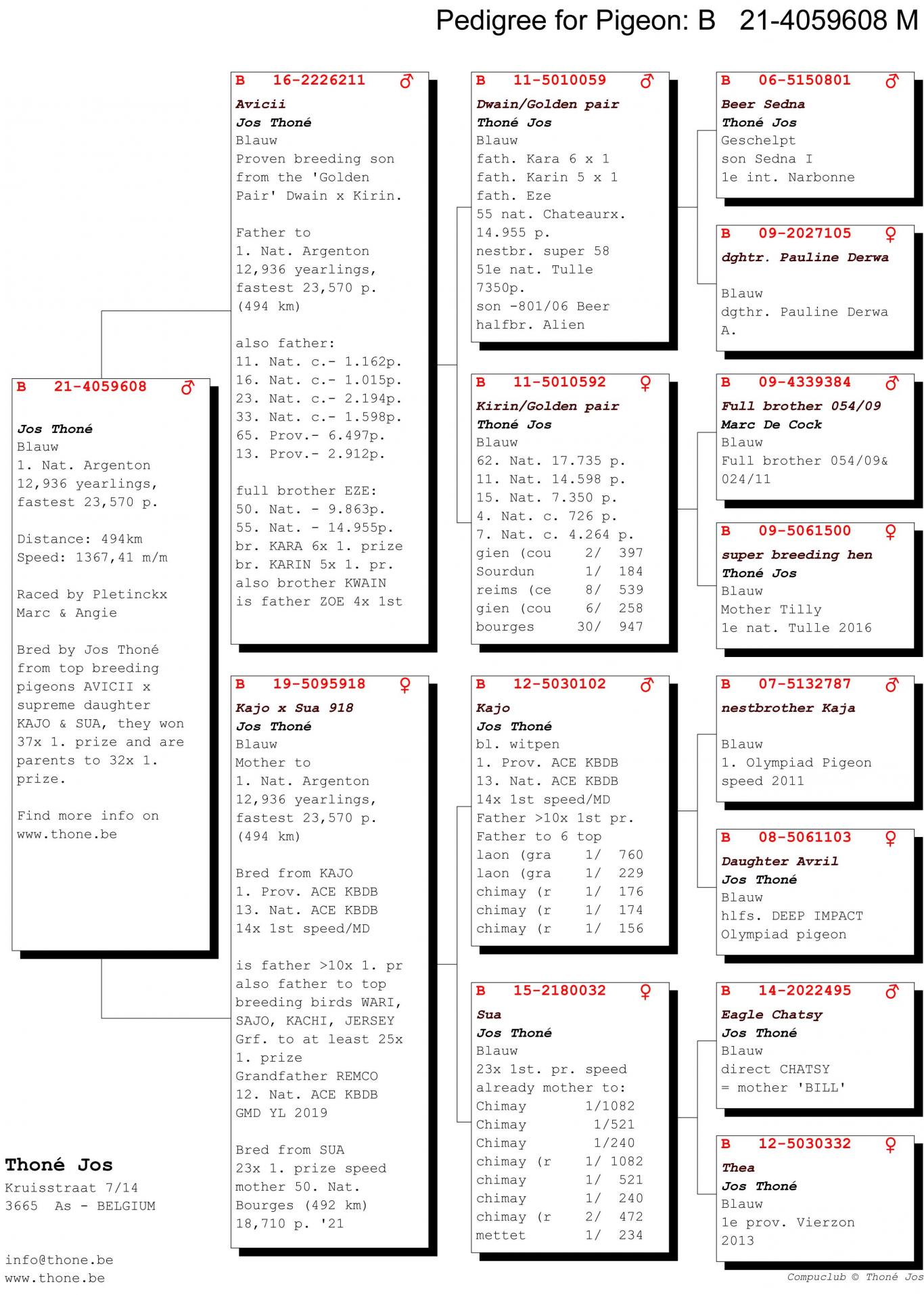 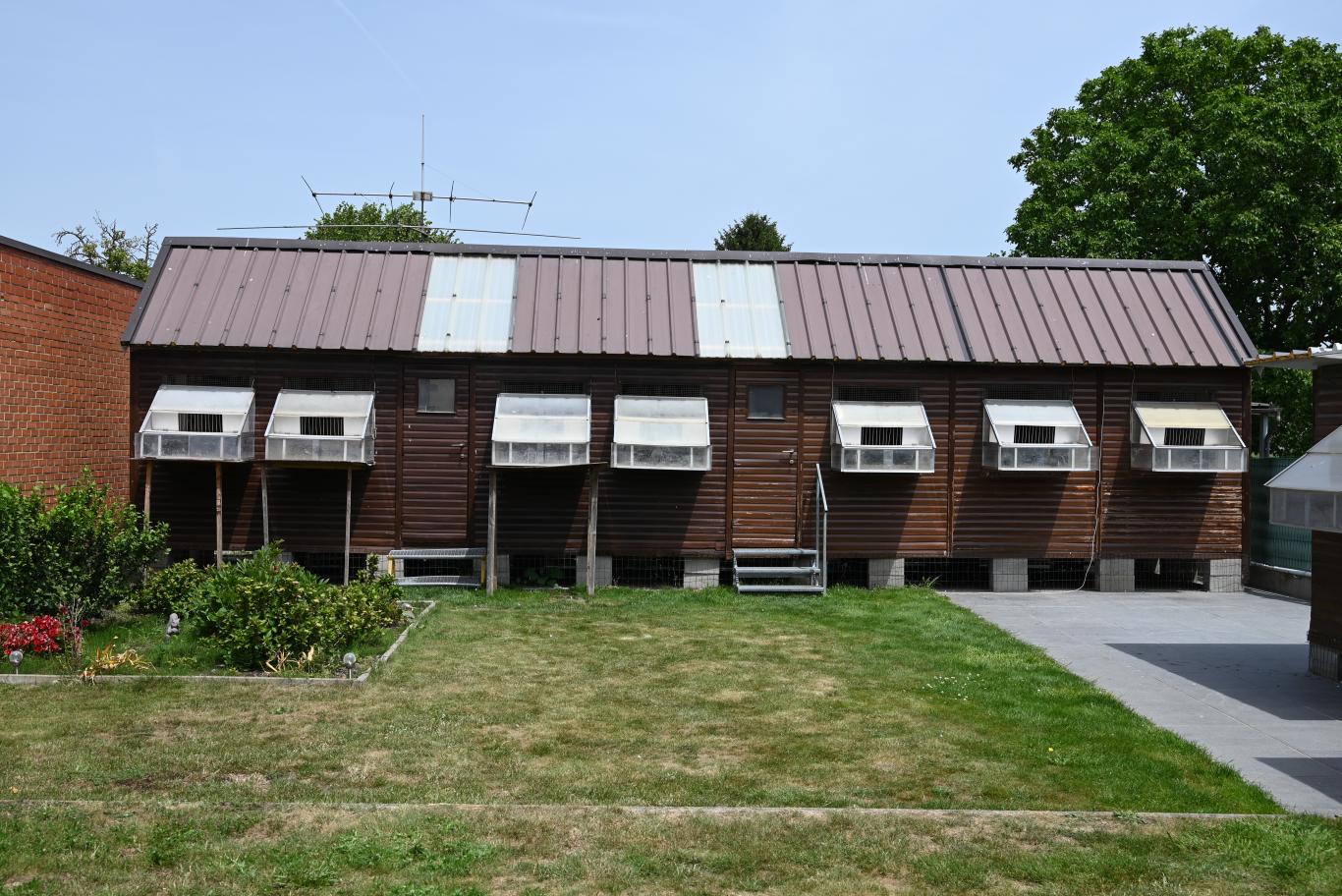 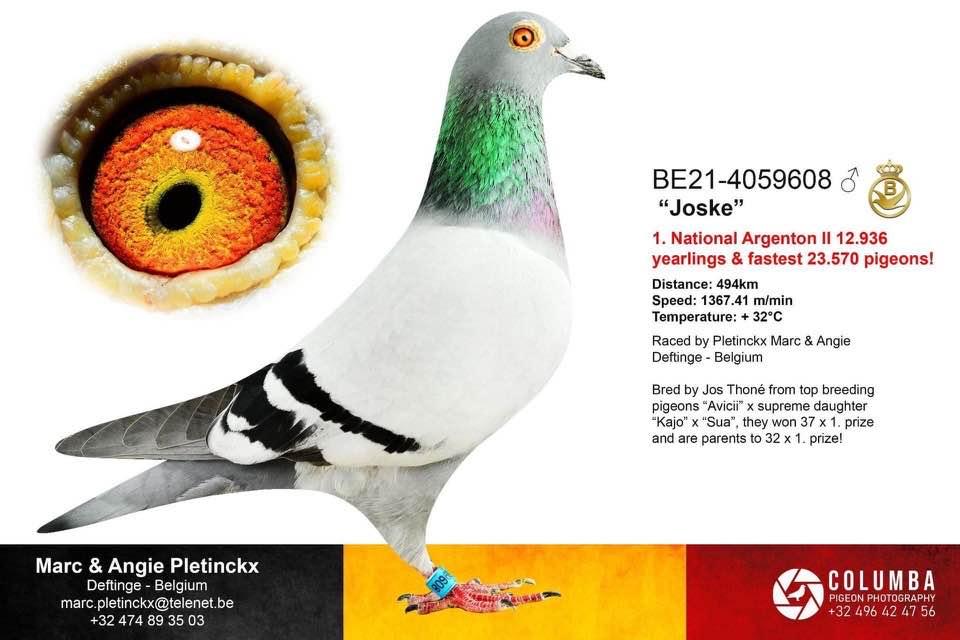