Mol: If you ever visited the pigeon show Fugare in Kortrijk I’m convinced that you have admired the booth from Tom. Tom is namely a collector of ‘old pigeon stuff’…clocks, results, magazines, and so on…it won’t be surprising that Tom is the only one with such an unique collection. Marvellous that Tom does this and we like to take the opportunity to ask fanciers who have unique piece at the attic not to throw this out but to contact Tom so he can accomplish his collection.

But next to passionate collector he is, together with his father Julien, a passionate fancier and the past weekend they had the provisional highlight out of their career by winning the 1st National Montélimar. Julien and Tom already had a preference for the races out of the Rhône valley, but now the preference will be jumped to ‘eternal love’.

The national victory was won by “Snelle Rik” (B19-6045372) . A marvellous red/pale cock who brought home the national victory on his first real test. ‘Unfortunately we missed his arrival’ explains Tom ‘nor I…nor my father saw him. Our winner can’t show an extended list of results as we don’t race our youngsters and as year bird he raced 4 x Momignies, 1 x Soissons, 1 x middle distance Sermaises, then Vierzon and Chateauroux as preparation to go to Montélimar.

A team of 32 cocks which are being raced on the classic widowhood system have to bring the name Aerts to the top of the results. The widow cocks had a winter breeding and could raise a couple of youngsters. After that a resting period was set to be coupled a 2nd time in March and breed for a week.
No other secrets are to be found. Feeding happens as with many from light to heavy and at arrival they like to add an extra portion of dextrose in the drinking pot. In between two races ‘Kuurolie’ and vitamins from Comed are provided. The vet is being visited three times in a season but they didn’t have to give anything yet this season. They do give the known ‘yellow drops’ against trichomoniases on a weekly base over the food.

The base of this father-son tandem is very satisfied with pigeons from Johny Van Lerberghe (Vleteren), Gerry & Jean Conaert (Dilsen and supplier of the father of “Snelle Rik”), Kristof Mortelmans (Ranst), Anemie Vanhee (Wervik) and Jos Thoné (Niel-bij-As)

Julien and Tom…enjoy your first national victory and who knows what the future will bring.
We like to wish you a lot of success. 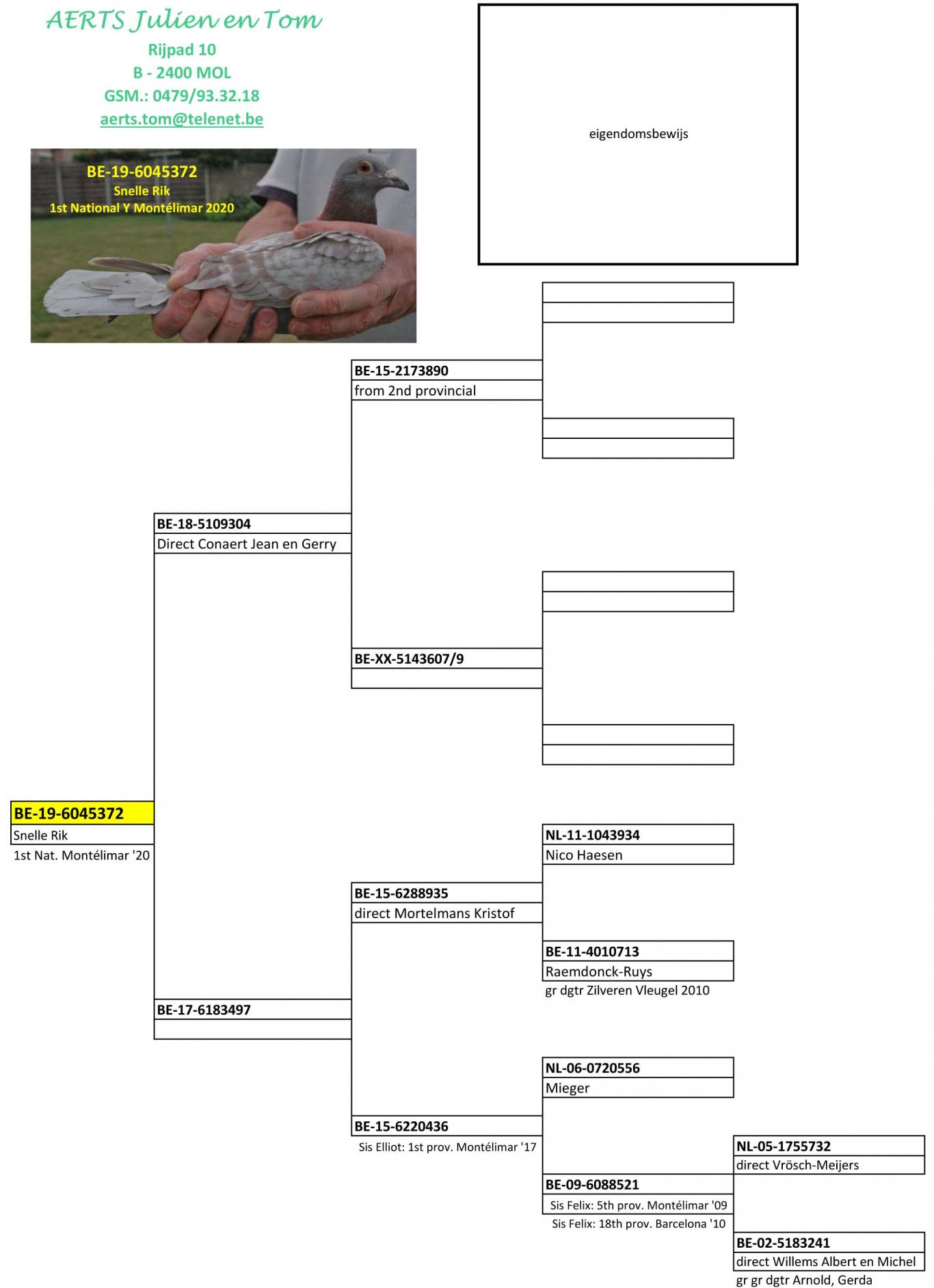