Ronse: Libourne national knew a participation of 4,605 old birds basketed by 1,140 fanciers. To be able to point out the winner the ‘auditors’ needed to check everything really well as it was a true millemeter sprint, a true photo finish, between Youri Deblanc (Ronse) with an average speed of 1,242.94 m/m and Vervloesem Patrick (Rijmenam) with an average speed of 1,242.85 m/m ! Seldomly seen such a close finish.

Youri Deblanc lives at the border of Ronse-Louise Marie-Maarkedal together with his family. Youri has been possessed with pigeons since childhood where he got the pigeon germ injected by his grandfather. Nevertheless he doesn’t have a lot of time left to be able to race pigeons by his busy profession and his large family it is stronger than himself and works passionate with his pigeons. Youri is honest by saying that it is thanks to Eric Vermander from Oekene that he became a real pigeon fancier. He got to know Eric in the past and as everybody knows this loft of true top pigeons and already for many years. Eric has pigeons that can race from 100km to Barcelona at the head of the race. When Youri came to live in Ronse in 2005 he went to Eric to get 6 pigeons. One of these pigeons was “Julien” (BE05-3072796), a pigeon with Devos- en Lippens-blood in his veins. “Julien” was a topper that won as an 18-month old pigeon the 7th National Irun against 5,252b and the year afterwards a 51st National Pau and 81st National Chateauroux against 10,981b. It became clear then that this pigeon should be kept as a base breeder. And as a wonder his genes worked really well with a hen from the old long distance strain from Marc Valepijn. This couple raised at the meantime many several top pigeons. Encouraging is that the offspring does it equally well and the in heritages is very strong.

The effort and focus is being rewarded.

Youri is as mentioned before, rather busy and this was even more intense in the period 2009-2014 (with a lot of business trips abroad). This lead that he only raced until 2016 with young birds and hens on widowhood. There wasn’t enough time to race widow cocks but the past few years, since 2017, Youri drew the cart of widowhood with cocks….and obviously with success !

The approach is rather classic :

The widow cocks train once a day, at the beginning of the season they don’t get to see their hen before basketing. As from the moment the long distance races approach they do get to see their hen before basketing. At the beginning of the season they are being fed light and when the tougher work is ahead they get this in combination with the energy full mixtures.
The widow hens are being raced on a nest position until mid of May and will go onto widowhood as from then on. They also train once a day and at the beginning they train without a problem a full hour. Along the season this diminishes and in a later stage they hardly train anymore. They are being basketed weekly. Also since the season of 2017 the ladies got a fixed partner as this was before more of a chaos system. This fixed partnership lead to remarkable better results. During the week they sit on shelves before the boxes, at basketing the couples can sit in the boxes also at arrival this is the case.
Their condition is being kept up-to-day by giving supplements such as Avidress, Usne Gano and Zell Oxygen (Herbots) and at arrival the adding of proteins to the food.
In a medical way he likes to work preventive instead of reactive. During the season he treats twice against trichomoniases. End of May he cured during 3 days against airway infections. Once in a while he makes use of the famous ‘yellow drops’. They also get daily a fresh grit mixture.

Youri, enjoy your first national victory and it won’t surprise us when we have to come over the coming years a few times again to congratulate you for a national victory. We award it you warmly. 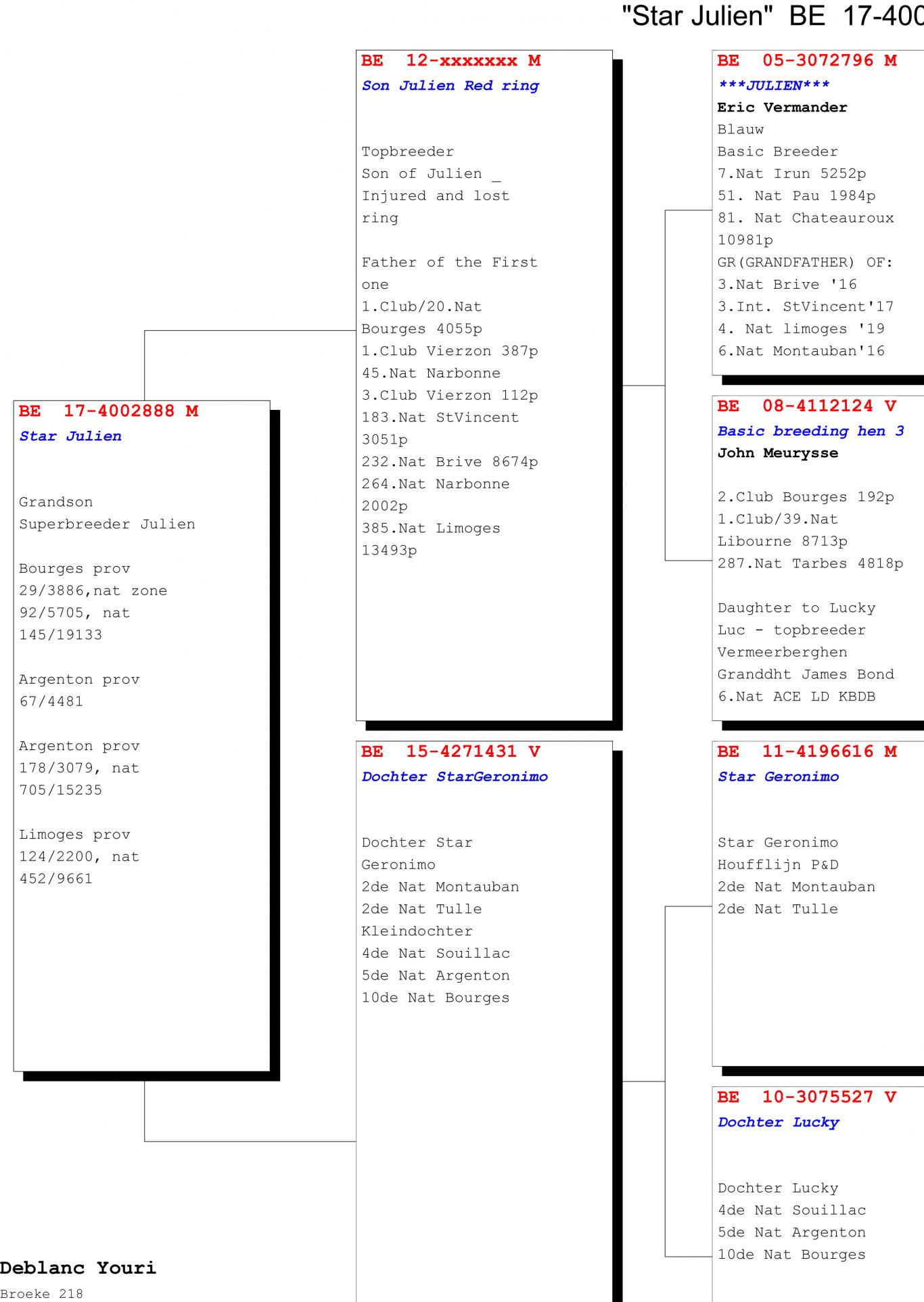