Berlaar in the province of Antwerp, more than one top fancier resides here in the diamond region from the past and this time we visit Vic De Wilder. He comes out of a real pigeon family where especially his brother Jef suffered the hardest from the pigeon germ. He is also the one that taught Vic the ‘job’. This didn’t put him back as in 2019 he won the highly coveted title of 1st National Ace bird GMD old KBDB with his top pigeon ‘Arnoud’. A class full one who became the best one over 4, 5 and 6 National races old pigeons. If you manage this you are just outstanding as a pigeon in that season.

Pigeon sport started off for Vic when he moved to his current address in 1996 with as base pigeons the pigeons from his brother Jef. The first years the goal was to race only youngsters and he did rather well with these. As it is a gamble on one horse he liked to try it with old and yearlings as well and this is what he has been doing the past 3 years.

The pigeons from Jef where selected out of top racers, they had to be able to do it or didn’t get a spot on the breeding loft. As you can’t continue on one strain only, Vic went to Bart Geerinckx in 2011 and 15 pigeons moved to Berlaar where especially the strain of the “Gladiator” was real successful. Afterwards he got some more reinforcement from Willy Daniels, Gaston Van De Wouwer and Danny Van Dijck who delivered the mother of “Arnaud”. The latest reinforcements are from Gert Heylen.

On the breeding loft at the spacious attic is enough room but he has 27 couples up there. You have to be able to see the wood before the trees you have to select hard.

How do you prepare your racing team ?

He only races cocks as yearling and old, I don’t have hens at the moment as I don’t have the time and room. The team of 2019 was 25 to 30 pigeons big but in 2020 this will extended up to 40. During the winter period they come out on a regular base as I think winter fat isn’t necessary, this hold off course some risks as my 2nd best widow cock has been caught by a bird of prey.

They are divided over 3 lofts fully separated from each other. The 1st coupling is in March where I have them breeding for a few days and after this the widowhood is a fact. From then on they come out twice a day and are being released as one group

The important thing on these lofts is that they are fully open on the frontside and are covered with wind breakers. I find oxygen very important and on the floor you can find roasters.

How do you race and motivate the pigeons ?

Everything from one loft goes to the same race, I focus especially on the national greater middle distance races. As preparation they mostly do : Quievrain, 2x Noyon, 2x middle distance and then towards the nationals always with one week rest in between when there isn’t a national race.

As motivation I always do the same, I give them their nest dish for a few minutes and then I will start to take them away. At arrival their hens are ready and can stay together until the day after in the morning.

A few fixed rules at the De Wilder house are; rest on Sundays, on the day of basketing they only train in the morning and after the season there won’t be a coupling.

Did your top pigeon had some special habbits when you noticed he was in good shape ?

They say most of the time; a good one shows when he is in good shape, well in his case it was so that I placed a wire on top of the roof. When he went up there and would sit at the corner of this it was bingo. You don’t see this right away but when my cocks are up in the air you have to leave me alone. Observation is really important during the racing season both in the air as on the loft. Every cock has normally one box on the loft and a few shelves are being placed that I can let down to motivate them extra. Arnaud also had one which made him extra motivated.

He is a 2-year old cock, did he do anything special before this?

He was a late youngsters that only did a few times Quièvrain and Noyon, so as yearling he didn’t have the experience yet on the national race but he was always present. So experience and my patience with him showed off. 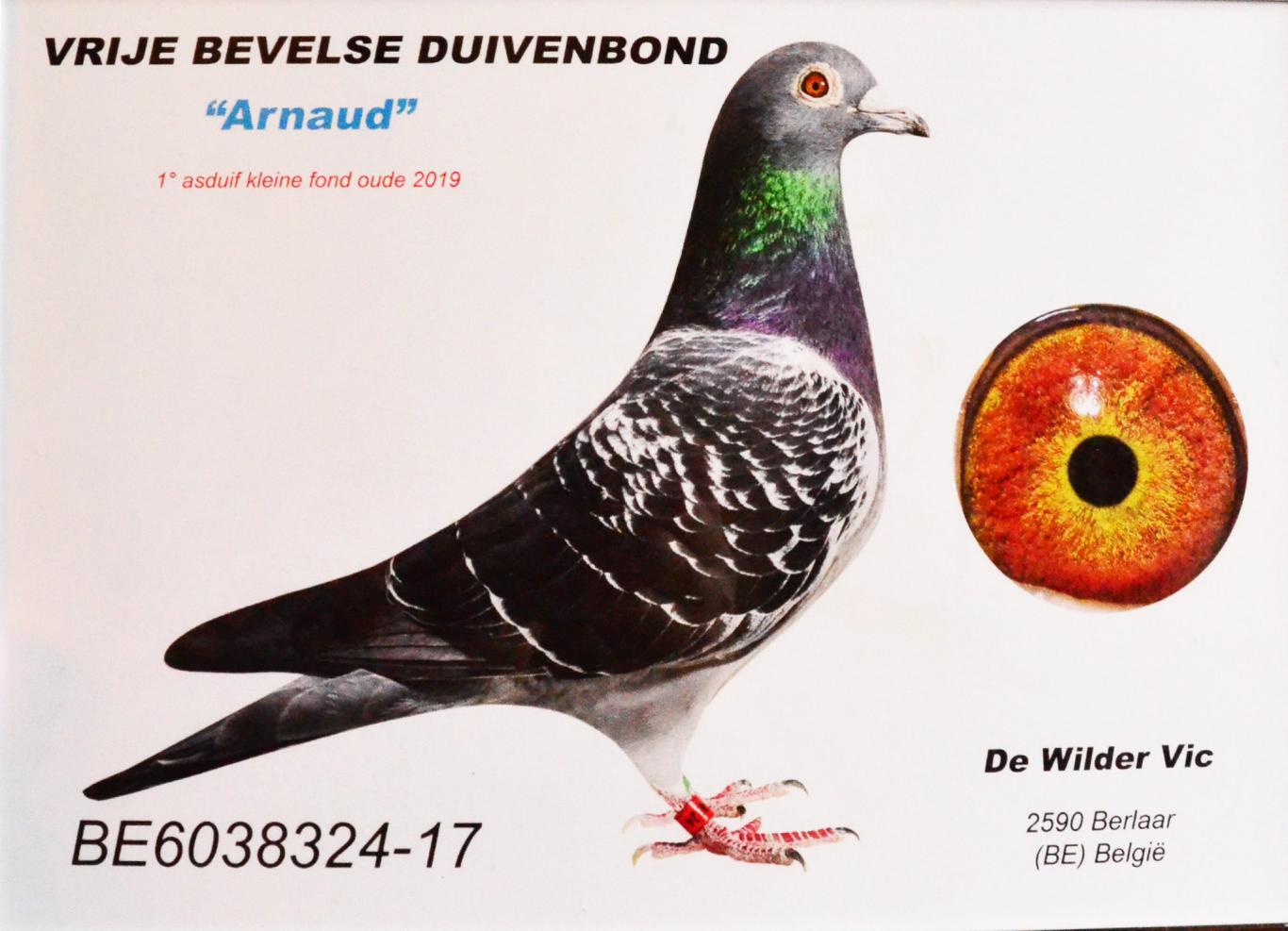 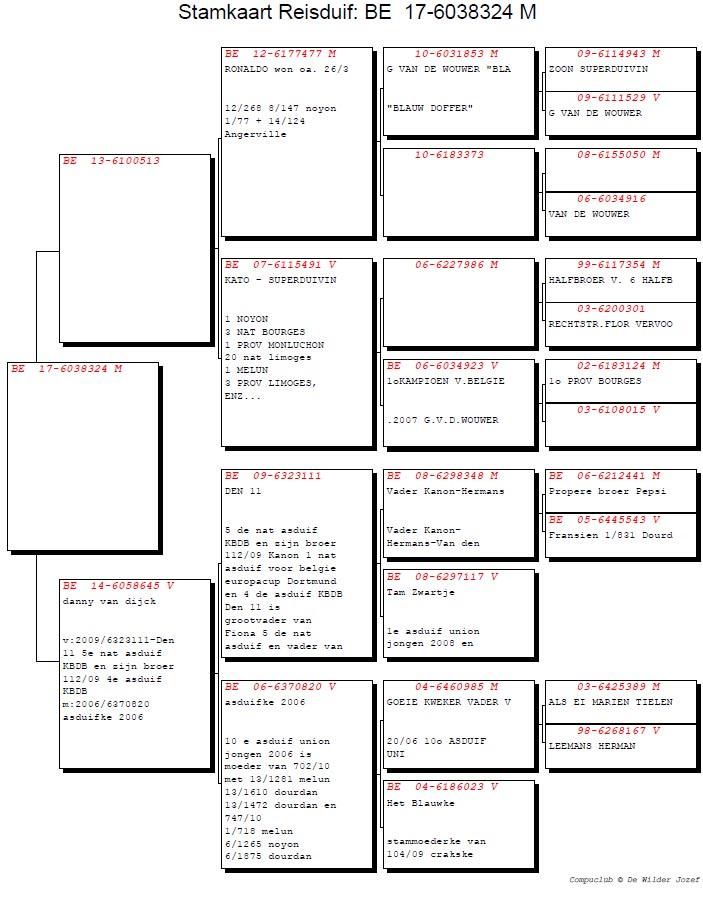 Another top pigeon to keep an eye on next season is underneath cock:

On a yearly base about 150 youngsters are bred to race, these are divided over 3 lofts and are being darkened from the beginning of March until the 21st of June and are enlightened from then on until the end of the season.

The goal of the youngsters is also the national races of the greater middle distance.

I separate the sexes from the beginning on and race them like that the entire season, they don’t see each other until the middle distance race. Afterwards this will be for half an hour just to avoid the shape coming to quick.

The young cocks aren’t being coupled and also have to do the national races and have to show themselves to make it to the racing team as a yearling. The best young hens go to the breeding loft.

The late youngsters from the 3rd round do a few times Quievrain and Noyon and are especially selected by hand.

Until the past season I always gave the Beyers mixtures. These were the depurative, Sport and Super Energy the last two days before basketing.

At arrival they always get  depurative and Belgasol from Belgica De Weerd in the drinking water. The day after it is 50% depurative and 50% Sport. This is being build up until the last 2 days when they get a fat rich mixture Super Energy. They are being fed together as they have to find the food according to Vic and he provides fresh grit on a daily base.

Next to this he makes use on a weekly base of brewers’ yeast, Avidress Rhönfried and vitamins.

In a medical way he always go at the beginning for a check up to Henk de Weerd. The pigeons are being cured in Autumn against parathapoid and are being purified during 5 days with B.S. against tricho by the time the racing season starts of. Also for the airway he treats them once and the youngsters got especially drops when the eyes were infected just as on a lot of other lofts.

Vic, a big congratulation with this super crack from the entire HERBOTS TEAM.