The first time I went to Bernard Van Renterghem was because of his national KBDB middle distance title 2006. At that time, this Hainaut colony impressed by winning this national championship with an extremely low coefficient. In the meantime, the Van Renterghem pigeons kept on impressing and they were able to rank among the national champions almost every year. Also last season, 2021, it was again "bingo".

Remarkable is that Bernard started to focus more and more on the short distance races the last few years. When we asked him the reason for this, he answered: "It has everything to do with the combines in our region. In the past, we had a very nice combine on middle-distance but nowadays they only send pigeons. This is the reason why I started to race the short distance again.

Bernard Van Renterghem is already more than 45 years fancier. Already as a little boy he was sitting at his father's pigeon loft but when father stopped he decided to join forces with his brother. The tasks were nicely divided ... brother was lord and master of the breeding and young pigeon loft and Bernard took the widowers team under his care. Short distance and now and then middle distance was their thing. They were not real champions ... now and then putting a top result on paper was more than enough for them. Pigeon sport was synonymous with pure relaxation! But life can be too hard and Bernard's brother left us too soon. Bernard was suddenly alone and even thought to say goodbye to pigeon sport. But thanks to the support of the family, Bernard fortunately did not take this decision and he found his relaxation in pigeon sport.

The basis of this national champion's loft is since decades Andre Roodhooft. In 2003 a golden move was made by buying 40 eggs of yearling pigeons from Andre Roodhooft. These pigeons were all raced and suddenly this Walloon colony became one of the best in his region. Bernard was so satisfied with the race and breeding results of the Roodhooft pigeons that in 2006 he bought another 50 eggs from the yearlings. You can safely say that 90% of the Van Renterghem colony is composed of pigeons from Andre. When some "foreign blood" was brought in, it was also transported to Pipaix via Andre. So, pigeons from the lines of "Di Caprio" (Van Dyck/Heremans), "Kittel" (Van de Bulck) and Dirk Van Dyck came to reinforce the breeding loft.

Despite he may not show it, we know very well that Bernard is a super motivated fancier. "Success in pigeon sport equals top care and top care means doing everything for the pigeons 365 days a year. The mistake that many fanciers make is that they only give the best of themselves during the season and then they are surprised that during that same period they are just a bit short."
With the exception of 4 hens, which are among the youngsters and are played on the big middle distance, Bernard completely draws the card of the game with the widowers. In total he has 32 cocks (50% old - 50% yearling) on very airy lofts. At the end of November they are paired with the 24 couples of breeders. The eggs of the first round of the breeders are put under the old widowers. Only the very best widowers are allowed to raise their own youngsters. Bernard also has some under laying couples so he can move all the eggs of the breeders perfectly. The breeders then quickly have a 2nd round of eggs and these are moved under the yearling widowers which are coupled a few days later than the old widowers. Also here a number of support couples catch up the unequal number.
By acting like this, Bernard has quickly 3 rounds from the breeders and it doesn't bother him when the hens of the best widowers lay again because with some puzzle work, they can also be moved and he has, if all the puzzle pieces fit, 4 youngsters from his toppers.
At the beginning of March, there will be a 2nd pairing on the programme and the widowers are allowed to brood some 4 days. Mostly we look at the weather so the widowers can do their first training flights while they are hunting and breeding.

Bernard: "As far as feed is concerned, I have full confidence in the mixtures of Versele-Laga. At the beginning of the week I work with "Relax black Maize" and from Tuesday evening "Sport with black Maize" is on the menu. The widowers are always fed in full, the food is constantly there. Only on the day of basketing, in the late morning, the feeding trough is taken away and put back a good hour before basketing. Then they have enough time to eat and drink. I usually feed a mixture of sweets to the full.

The widowers train 2 times a day. Always with an open window. They can fly in and out freely. I only look at how intensively they train. Even if it's only about 10 to 20 minutes, it's more than enough for me. I will never force them to take to the air. When the widowers are in shape, they will do this by themselves.
From a medical point of view, I consult the vet for the obligatory inoculations and for the rest I try to keep the medicine cabinet as closed as possible. Last season, I have treated against ornithosis 3 times during 3 days. Against tricho they are released before the start of the season and afterwards the well-known "yellow drops" are given through the feed. On Thursday (the day before basketing), vitamins (Schroeder) are put in the drinking water.
Fanciers who visit my lofts are amazed how much ventilation there is on the lofts. I know that this is against the general rules but when the pigeons on a loft perform well, you as a fancier can't change a single nail or the top performances are over.
At basketing, the widowers are locked up halfway and they get their nesting dish. A few moments later, "madame" appears for about 30 seconds in the living box.
There are not many other motivational tricks up my sleeve. Except for my 6th national ace pigeon of last year. On the widowers lofts, there are more boxes than there are pigeons, so opening an empty box on the day of basketing can always stimulate someone. My 6th national ace pigeon has no less than 3 boxes which he defends with all his might. During the week, he can only take one box but on the day of basketing, his territory is extended to 3 living boxes. A pleasure to see how he is defending everything. 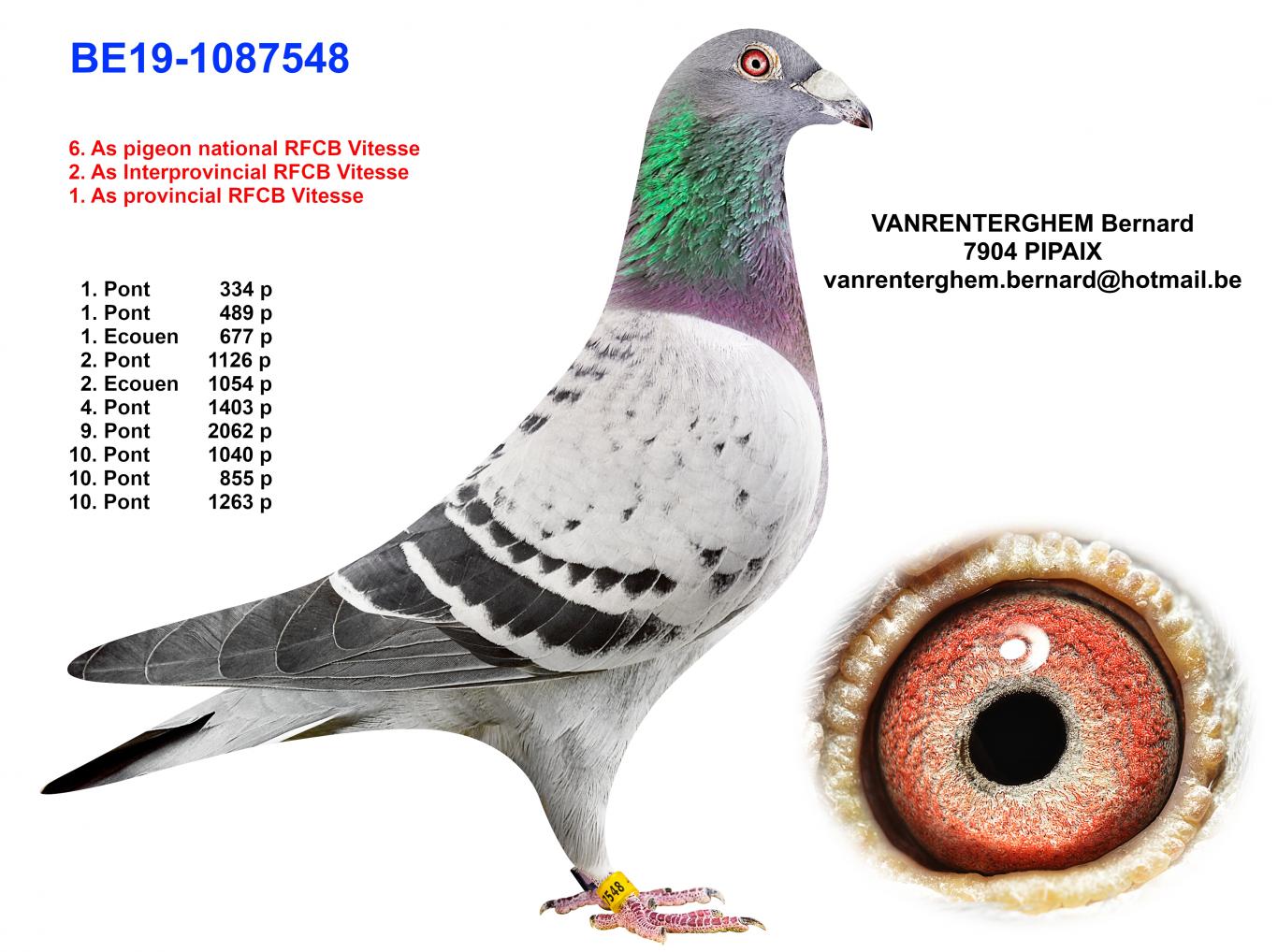 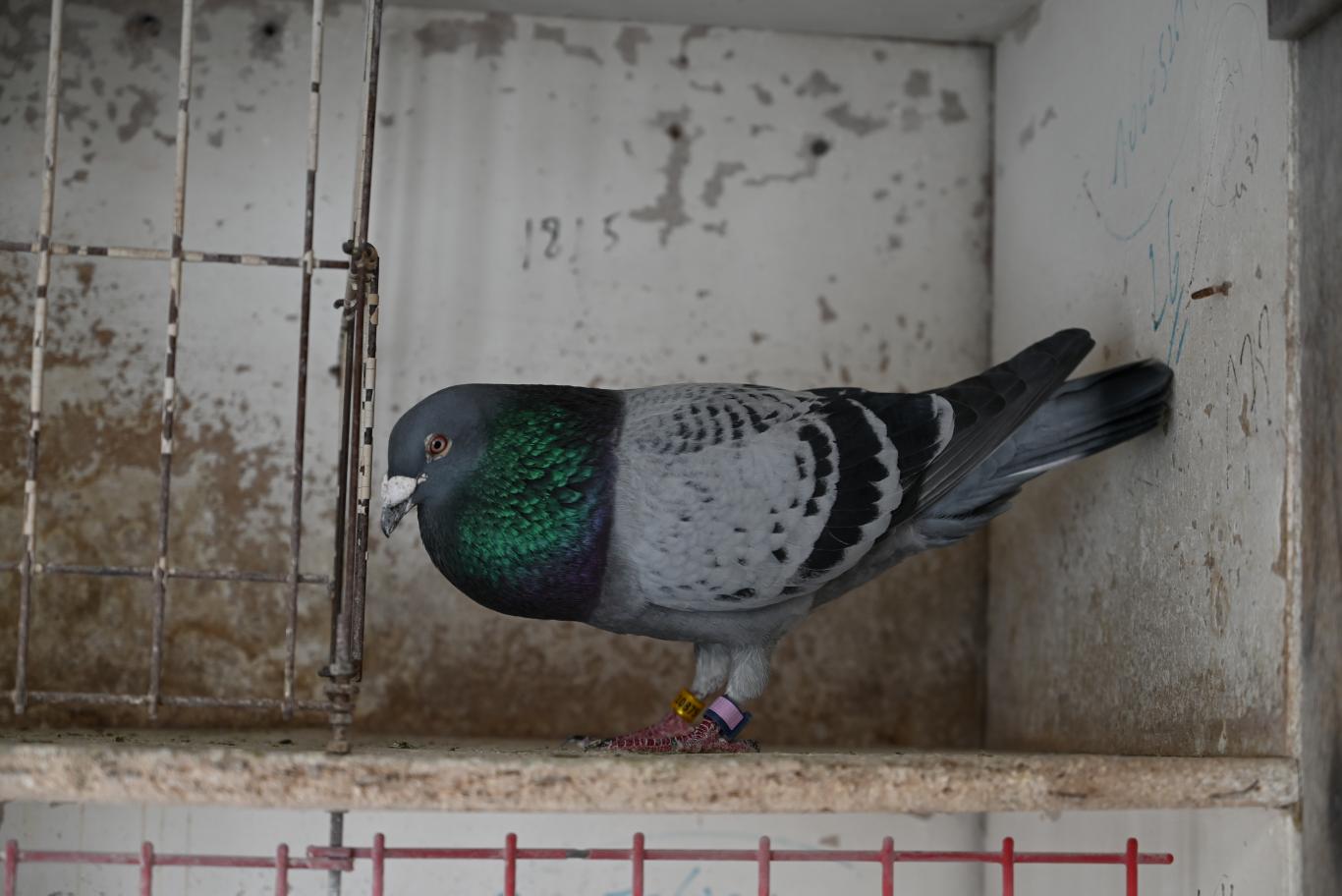 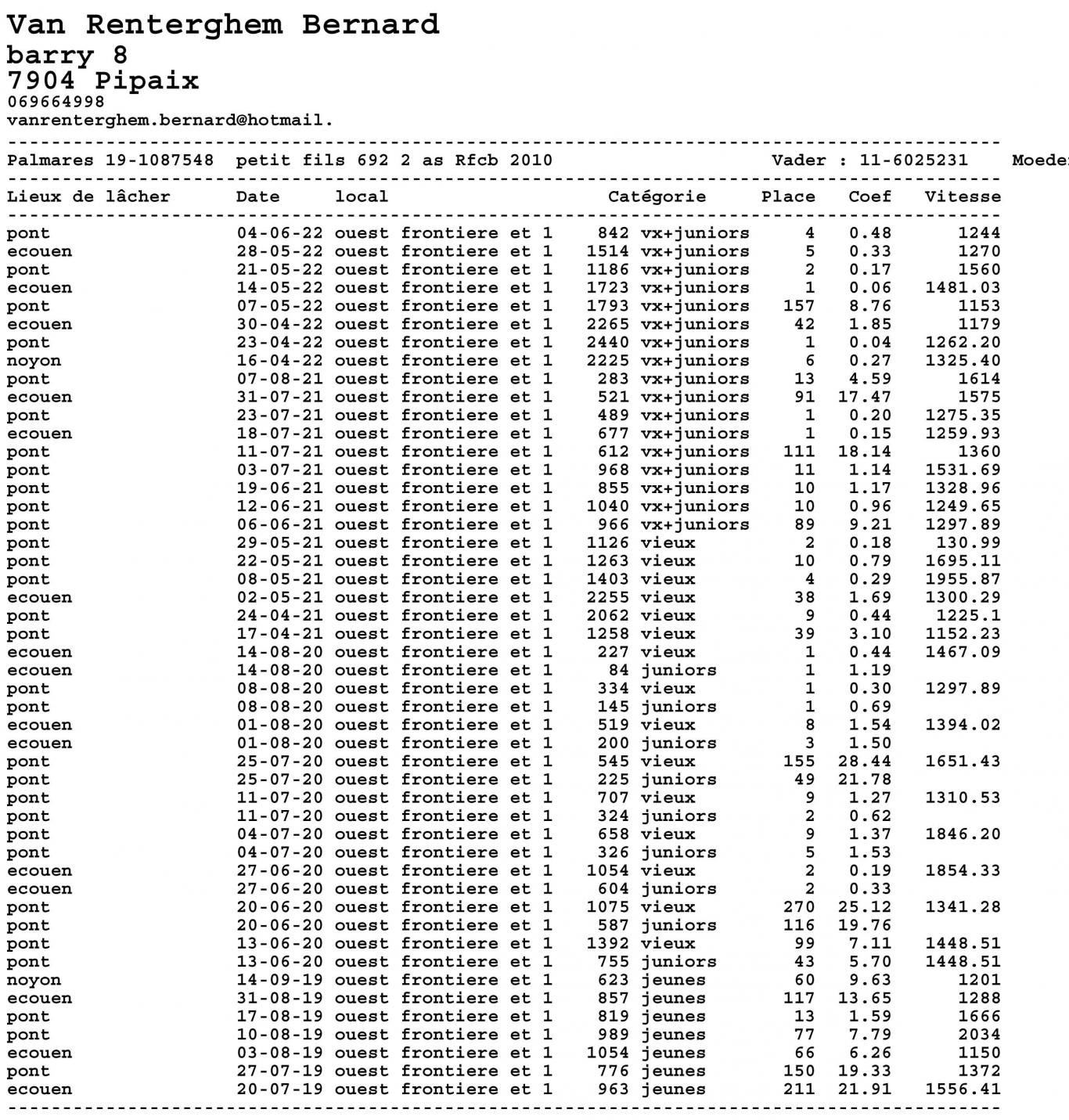 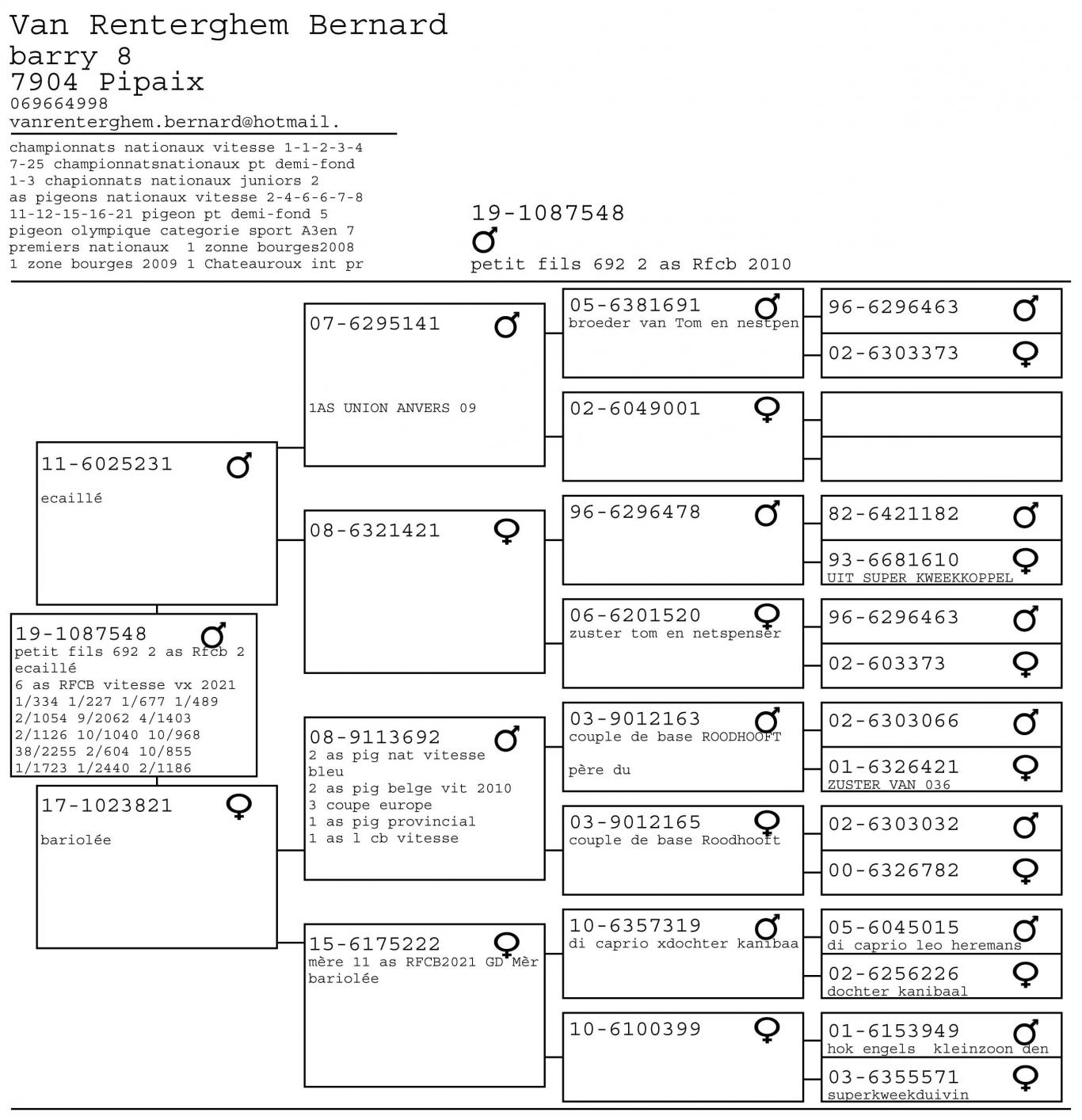 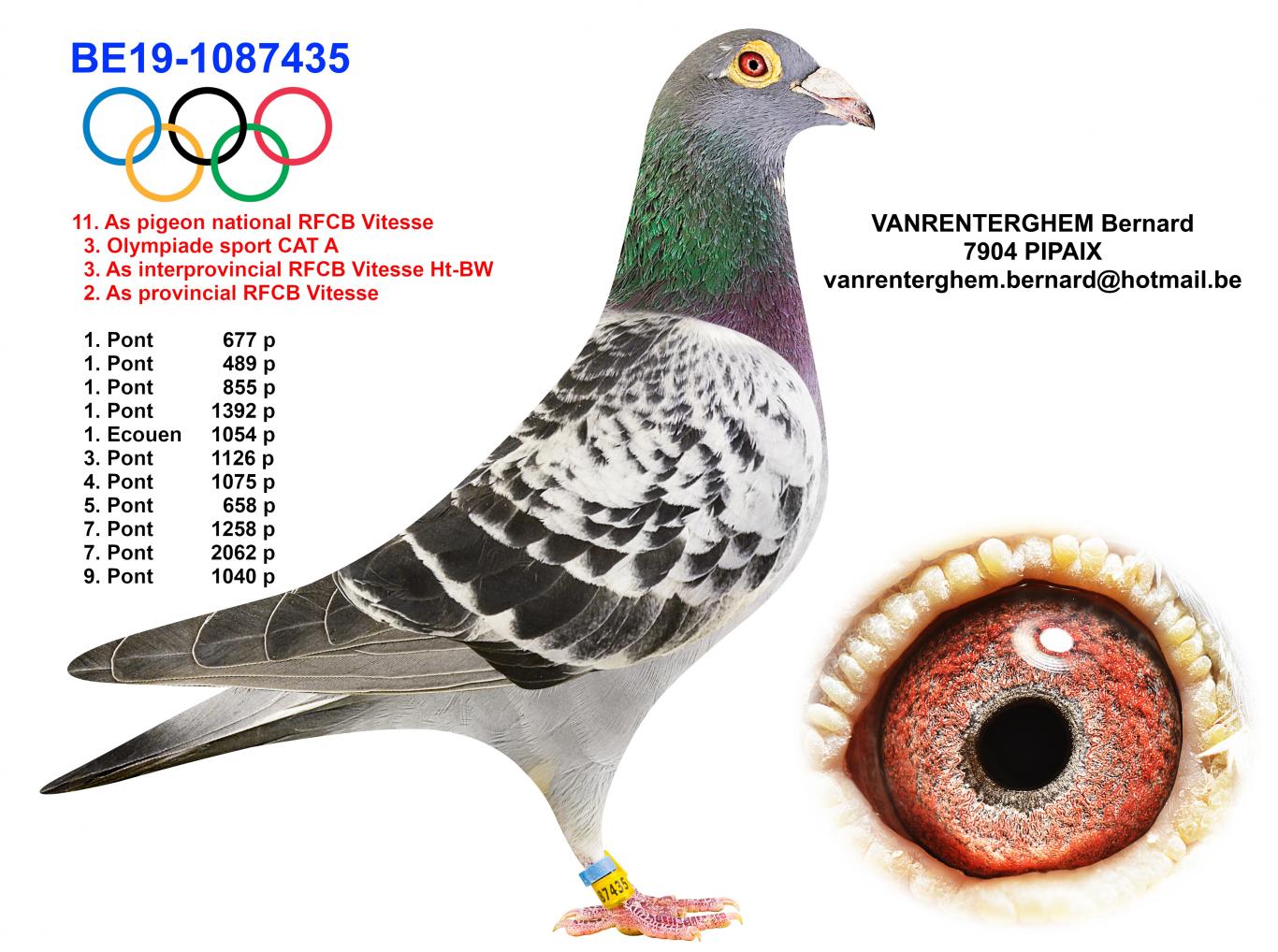 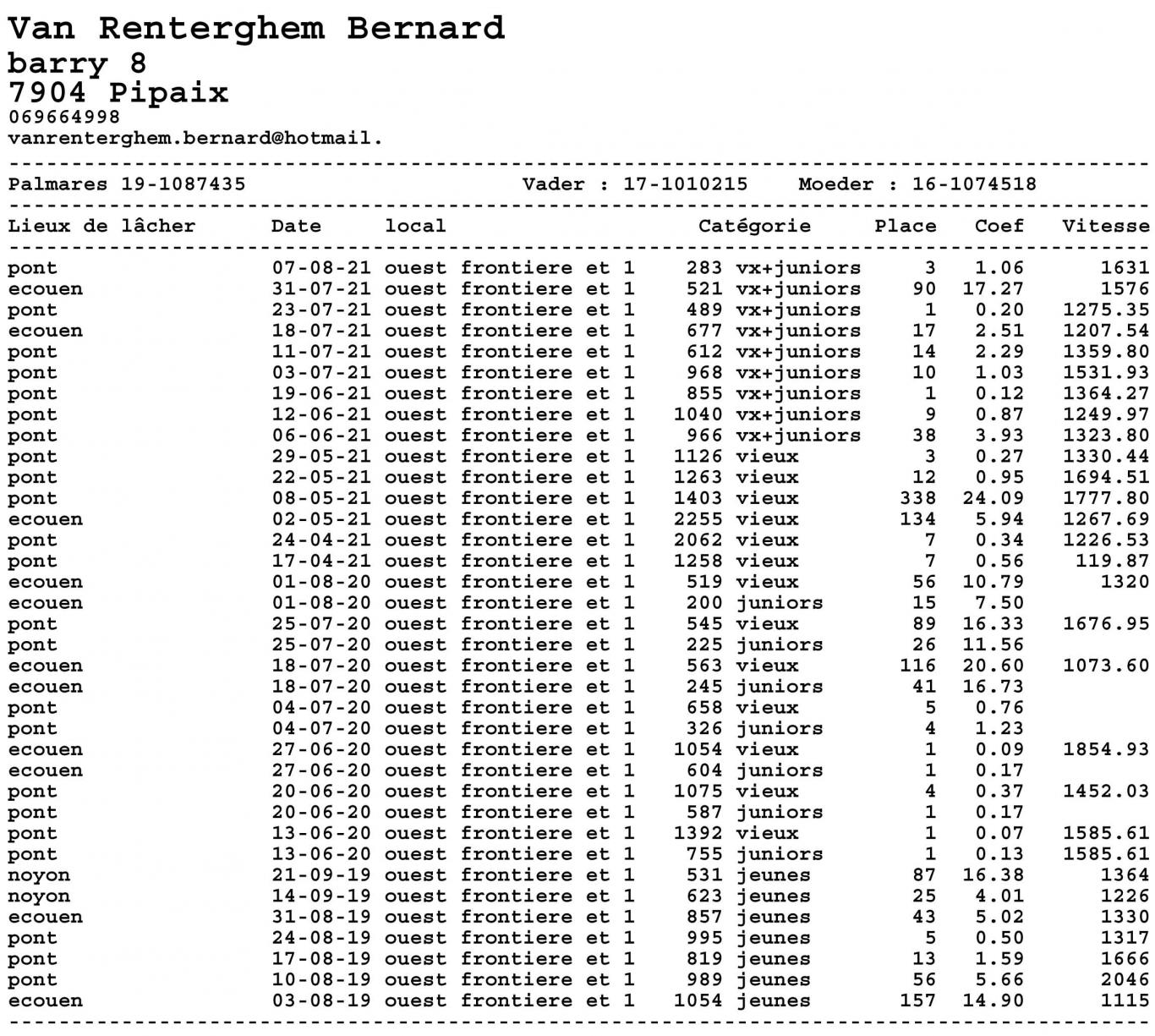 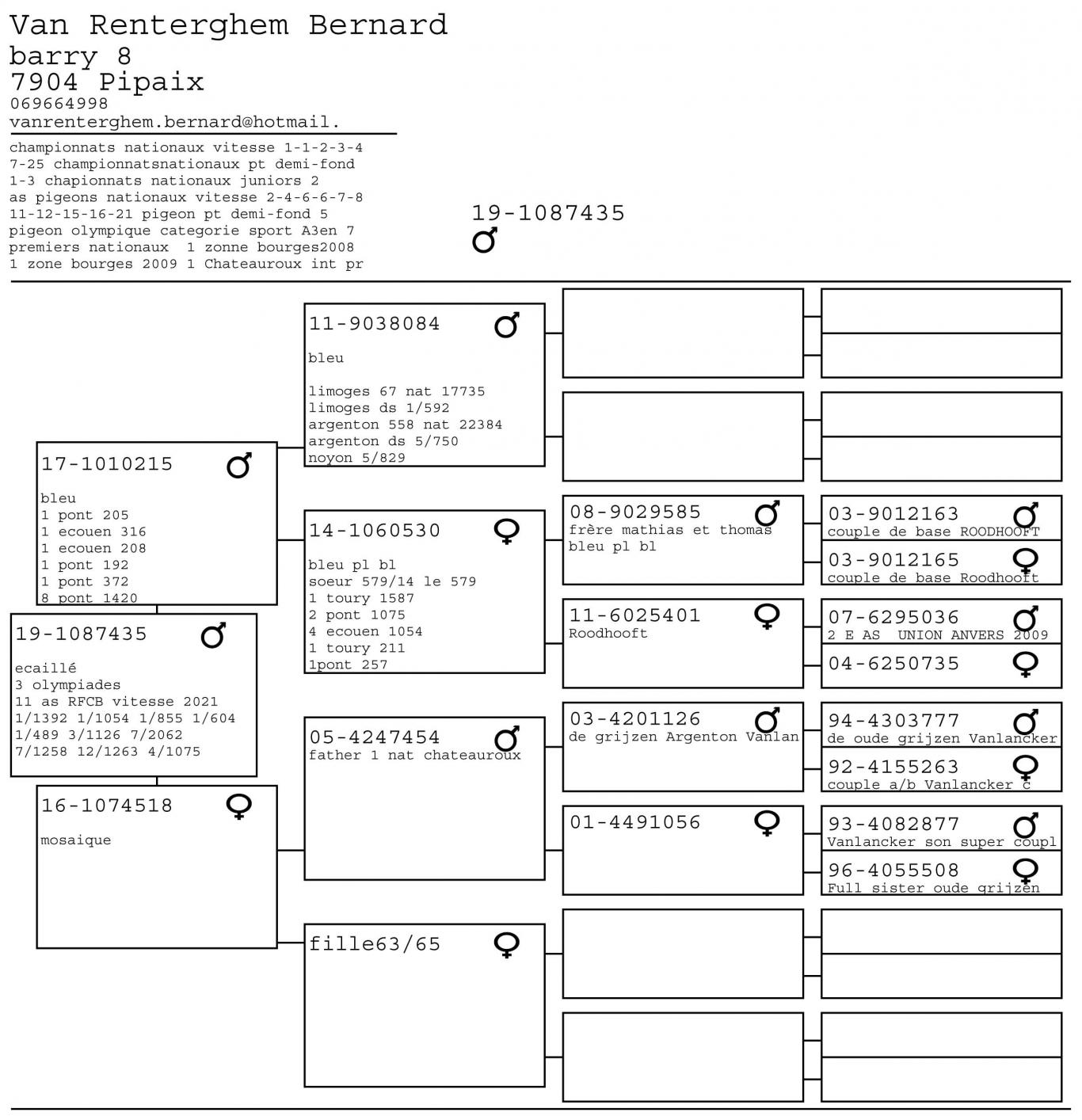 The game with the youngsters is subordinate to that of the old and yearlings. Bernard: "Mostly they stay on the sprints and sporadically they go to the middle and long distance.
The youngsters are played on a nest all season and are darkened only until half May. I prefer that they start the early winter breeding with their wings worn out, than that they are still in the plume during the last races.
The care is the same as with widowers with the difference that the feeding trough disappears from the loft after about 10 minutes. The youngsters that are fed full time don't listen and that's not the intention. We mustn't teach them "bad manners" either. 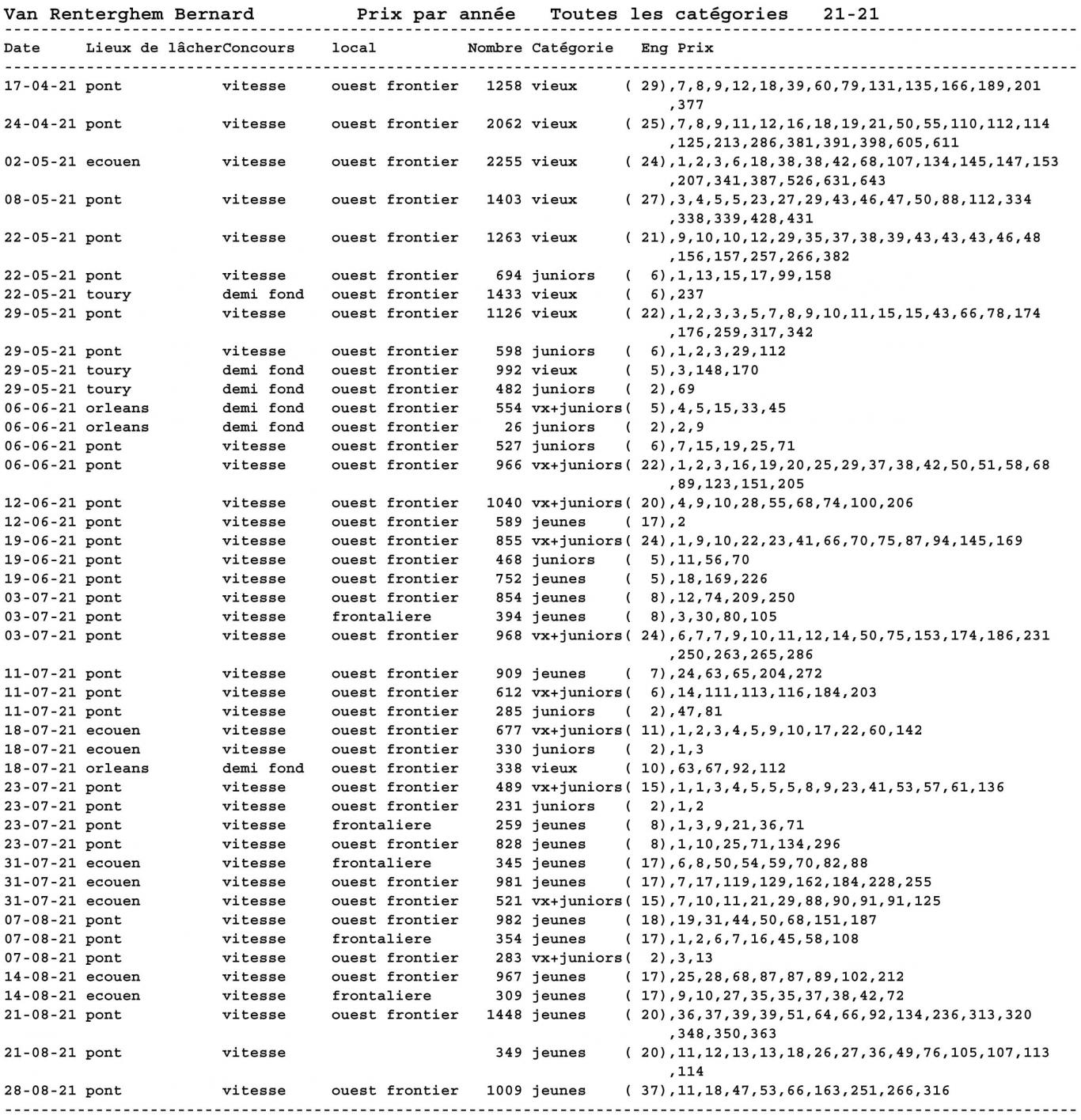