You will all know pigeon food Anthoons for several years now, next to this busy job Stefaan & Gerda try to make some time to run their own colony. This with goal the extreme long distance and preferably Barcelona. The past years they invested heavily in extreme long distance blood out of Holland and Germany and are now starting to build up a breeding loft which made them reap the benefits on the past two Barcelona editions. In 2018 they started with the 92nd National Barcelona but in the very hard edition of 2019 they won the 3rd and 49th National. This both with 2-year old pigeons who raced Barcelona for the first time in their career.

How does career start over here ?

The youngsters are born in April and won't see a basket in the club, they are being tossed by themselves to 100km, this is the only experience they get.

As yearling they have to do a lot of races until max 500km. Getting experience and coming home fresh is the main goal.

Then they get into the real racing team, this is about 30 to 35 pigeons big. During winter time they are separated and aren't being coupled, they do come out once a week. In February this is twice, March 3 times and from April on a daily base and are being tossed as well. After every toss they can get together for about one hour to one and a half hour.

After the shorter training races they get trainings on the races out of the Eastern part of France, direction Rhone Valley, this is about 400km. Then it is almost the beginning of June for their last test, they have Valence (664km) before they go direction Barcelona.

Until last year everything was being basketed on Barcelona but in 2020 the goal is to basket the same weekend as Barcelona the 2-year old cocks on a one day long distance race and devide them afterwards over Narbonne and Perpignan. Depending on how heavy Barcelona has been, some of the hens will go to Perpignan but not the 2-year old hens.

When the racing season is over they can breed before they start moulting.

What from Valence to Barcelona ?

Until Valence they are being raced on classic widowhood without motivation, these are training races for us.

When they come home from Valence they can recuperate for a few days and are being coupled mostly on Tuesday. The hens are always on chapels in front of the boxes, these are being taken away and all boxes and the two lofts will be opened so they can do whatever they want.

The goal is to basket them on a nest position of about 10 to 12 days breeding.

During this period they don't train around the loft anymore but extra training tosses are being planned. Normally they will have 8 trainings in a matter of 18 days' time. This can vary from 50km to 150km (this last one won't be in the week of basketing for Barcelona). We drive meanly in an Eastern direction from Belgium and Luxembourg to let them orientate from that direction. We don't do anything special anymore on the day of basketing.

It is obvious that he gives his own mixtures the entire year trough. Stefaan choses in Winter a high fibre and protein poor mixture that especially exists out of barley, oat, paddy rice and a small portion of corn and peas. After that he switches on to Super Recup Hi-Tech Performance in March for about 80 to 90% together with 10 to 20% Sport Maxi – Top Hi-Tech Performance. The last 6 to 7 days this mixture will be especially a sport mixture and they will feed them until 5 times a day. During the last days they switch onto the Energy Plus mixture of Versele Laga.

The last 5 days before Barcelona I feed half too much and the food is always being taken away in between 2 feedings and always get fresh food. The nest pigeons also get a small cup with food in their box.

Something else I do is preparing a bucket with egg food, tovo hempseed, peeled sunflower seeds and peanuts which I give in the evening in the breeding boxes.

In a medical way I try to notice myself a lot and I always go for a check up to Raf Herbots in Velm. Hardly anything is found during a check-up but with the old pigeons I make use of Yellow drops which I always give before basketing in the beak. Next to this I make use of the natural resistance and makes a lot of use of Darba DHP and Herbolan from Versele – Laga. He also uses his own product Opti Health which he uses to cure for 10 days before Barcelona.

The youngsters and yearling birds only get the obliged vaccination against paramyxo and nothing else.

As the lofts are fully open at the front side I make use during the season of a spray with essential oils to get the mosquitos and flies of the loft.

We like to introduce “Indira” and “Rakka” to you: 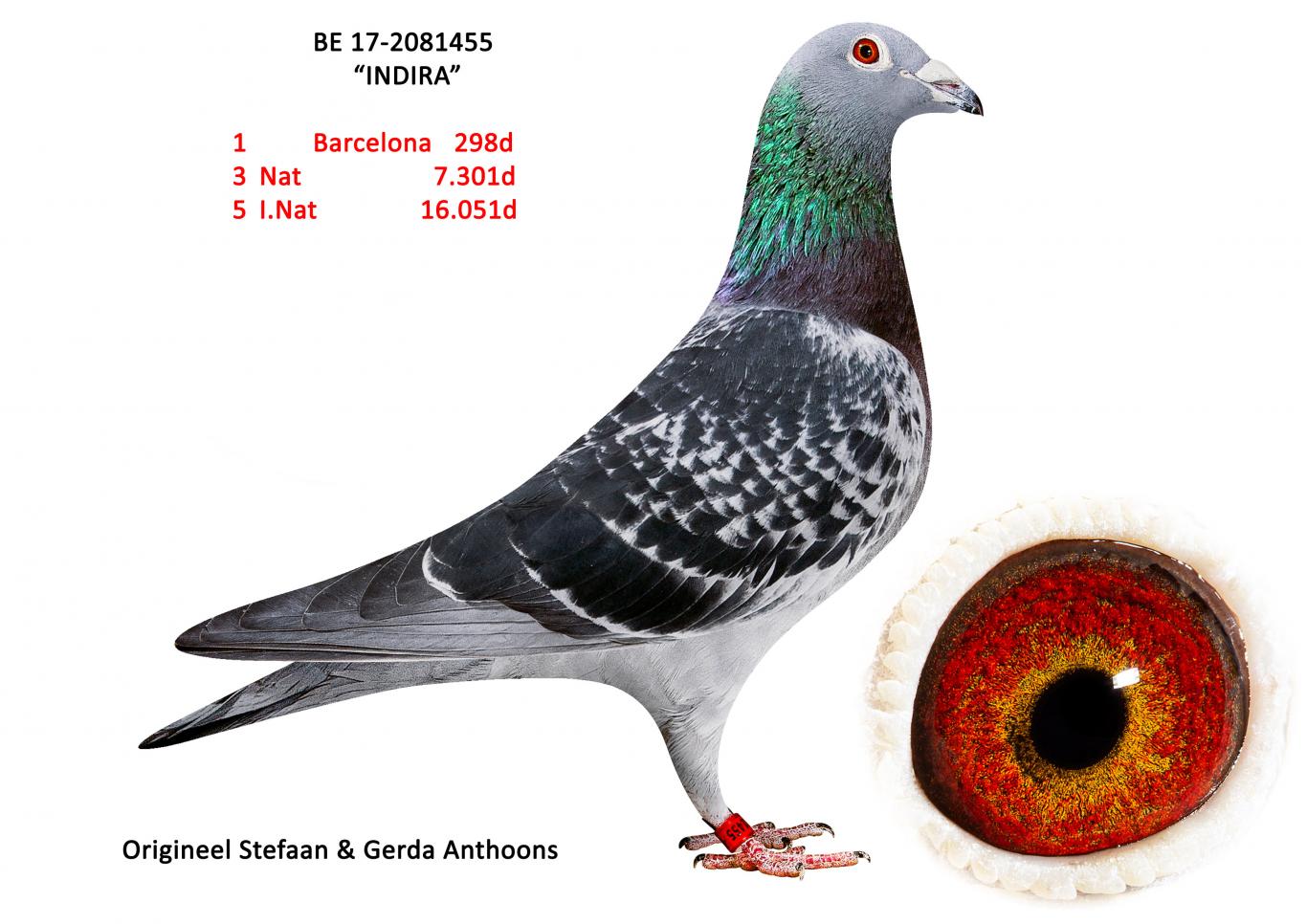 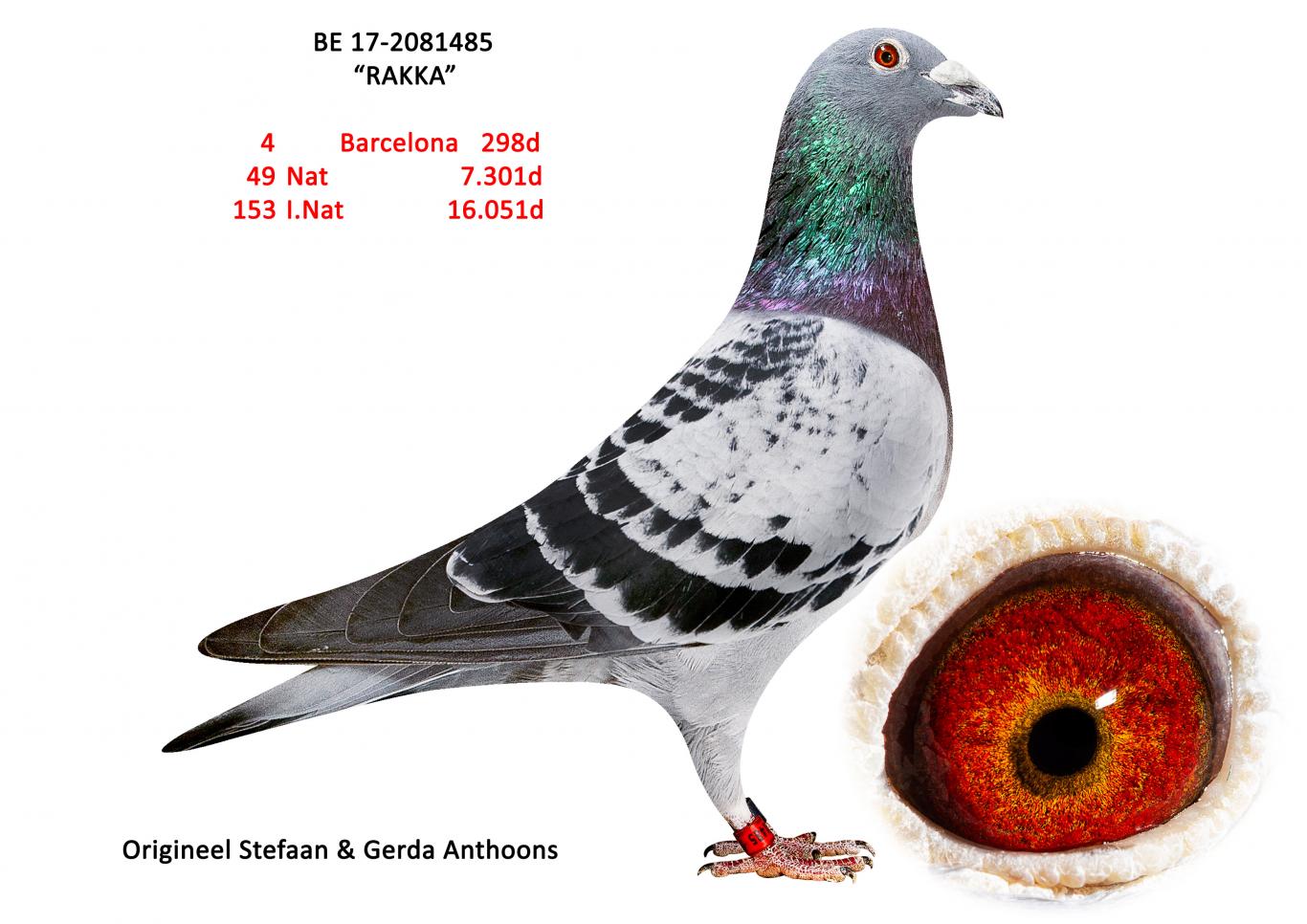 Especially for the Barcelona Special these two topracers from Barcelona 2019 where being coupled to each other. 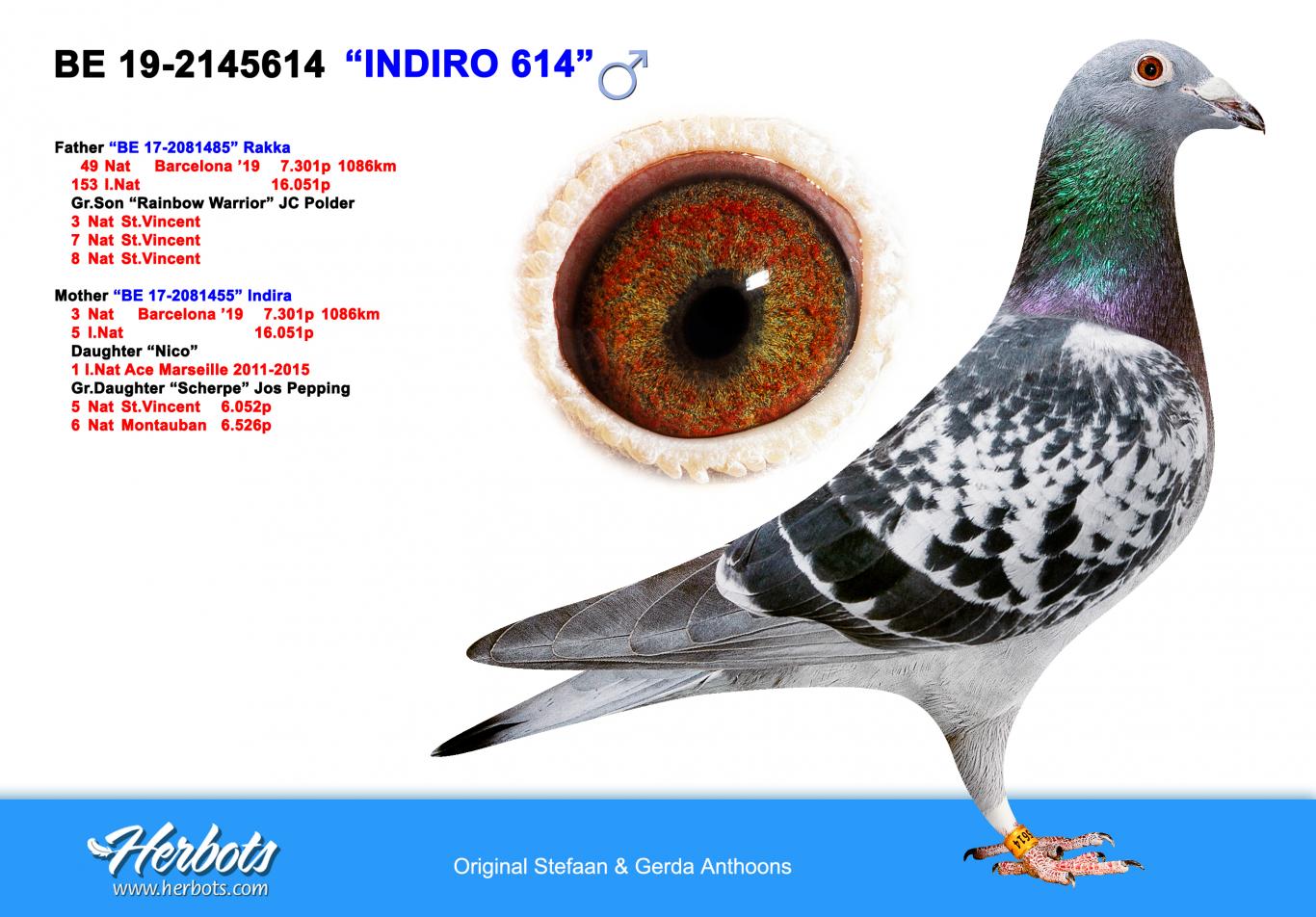 Stefaan & Gerda a big congratulation with these results from the entire HERBOTS TEAM.