Bonheiden: We had to bring out our best German to have a conversation with Redzovic Emin. "I am a German-born Serbian, but the love for my Belgian Bea brought me here. Meanwhile, many years have passed and I am a retired truck driver. Pigeon sport is my hobby and I owe a lot to Chris Cleirbaut for that. My loft is even an old loft of Chris and all my pigeons come from him. The beauty of this Bourges story is that Chris clocks the 2nd national. The pupil beats the master ... how beautiful can pigeon sport be."

After her exploit on Bourges, the winning hen was promptly christened "Bea". "Bea" is a firm hen and looks younger than she really is. Personally I thought she was a youngster from the 3rd round but apparently I hit the ball totally wrong. Did I let myself be seduced by the fact that "Bea" already had 4 pins ringed? "I don't really darken my youngsters" says Emin "I always say my youngsters are half darkened. There is a curtain in front of the windows but at the sides there is still too much light coming through. As a result, some youngsters like "Bea" just moult at their normal pace."

We can safely say that the victory of "Bea" was no fluke, because before she already won 1st Melun 390d. - 47th Melun 926b. and the week before Bourges she won the 7th Prov. Fay-en-Loges from 5,959b. . No wonder that "Bea" was on top of the loft. Winning Bourges national with your 1st signed youngster...class Emin

When asked if "Bea" was motivated, Emin could not immediately answer. "I know she is in love but apparently there must be some envy in the game because the last few weeks she has been a bit anxious.

As far as the care is concerned, I feed the Versele-Laga mixes and I swear by daily garlic in the drinker. According to some people I feed too much and too heavy but I don't care about that. When I started working, I also liked to have a good living, otherwise nobody can stand it. The same with the pigeons. I haven't had to give anything on medical grounds yet. As long as everything goes perfectly, the medicine cabinet stays closed.

I am known as someone who drives a lot with his youngsters. I still drive a lot but because of the high fuel prices, driving far has become much closer. I have about 24 breeding couples and about 70 youngsters from them. At the moment, there are still 33. Here too, there are many losses to note.

The future of "Bea" will probably take place on the breeding loft. She is a full sister to my 1st provincial Fay-Aux-Loges of last year, so winning seems to be in the family.

Emin congratulations from the whole Herbots team and we wish you a lot of success. 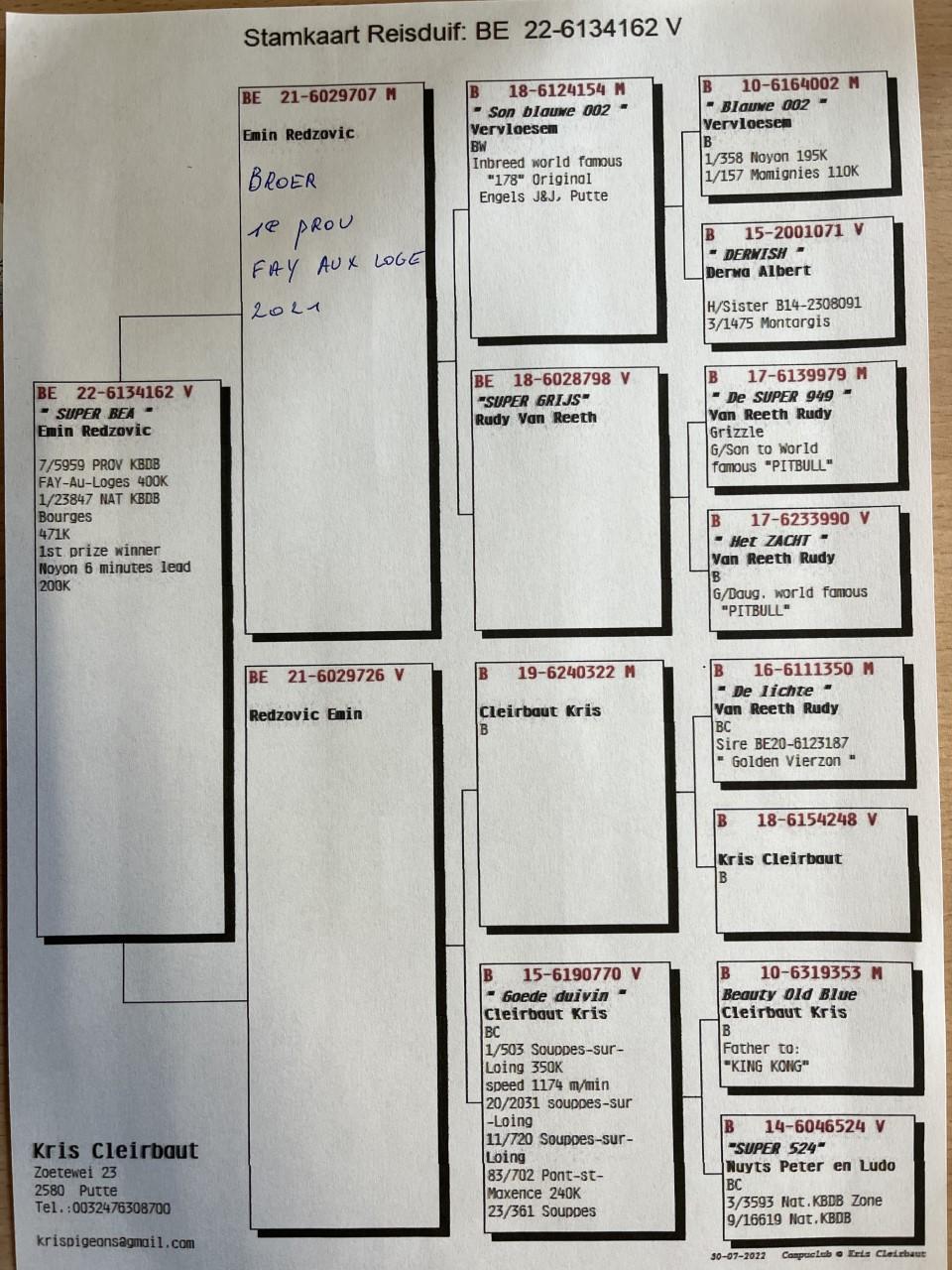