Rumbeke: You have to be able to do it, with Bourges National won Kurt and dad Raf Platteeuw their 8th national palm. Aurillac, Gueret, Chateauroux, Limoges, Tulle, Argenton and Souillac where the other victories! No wonder that we found a more than happy Kurt in the Kwadestraat in Rumbeke. ‘My goal is to win as much national victories on the long distance races (700km)’ is how Kurt starts of his story. ‘in other words, for this season the national races such as Limoges and Périgueux are marked with fluorescent on the calendar. The wind shall decide where the head prizes will be but when there’s eastern wind my motivation will be bigger.”
We can easily place Team Platteeuw in the box of the ‘big lofts’. Since a few years the principle ‘breed a lot, race a lot’ is being handled. ‘It is easy’ says Kurt with the necessary enthusiasm ‘during 4 weeks is everything that has wings being basketed. Even a pigeon that just got home the day before will be basketed. After these 4 weeks the entire team gets to rest during a week. Than they are being basketed again for 4 weeks, again one week of rest to end with 2 races. Calculated roughly we’re talking about 6,000 kilometres and I can guarantee you that the pigeons do their own selection when they get a program such as this one.”
As the former years the system of the total widowhood will be taken on. With a group of 125 cocks and 125 hens they go to war. All pigeons have to go on the same race, also the once with less experience then their loft mates and this could influence the result a bit. This is how he had a group of 63 unexperienced yearlings on Bourges. You just can’t expect anything from these pigeons and it isn’t remarkable that the prizes were won when there were only 5 pigeons home. ‘Let them get experience, that’s the most important thing’ is how Kurt defends his system.

The national winner is called “Greta”. “Greta” (B19-4184164) was bred by Pascal Ariën (PEC) and won already before Bourges the 139th National Brive 4,238b and the 306th National Argenton 23,258b. Her nest sister “Lieve” (B19-4184163) won the past weekend the 68th National Bourges and won the former season also the 125th National Limoges against 9,756 pigeons.
Father of both ladies is “B18-4194588”, a son to “Porsche 911” (B14-2230911 – won 5th Nat. ace bird KBDB yearlings greater middle distance and is father to the 9th national ace bird long distance KBDB) x “Ellis” (1st Nat. ace bird KBDB greater middle distance at Jo Bauters).
Mother is “Sister Norma” (B10-5170894), a daughter out of “James Bond” (4th Nat. ace bird KBDB greater middle distance) x “Gina” (72nd Nat. Bourges 16,023b.).
In a matter of food the own Platteeuw mixture (Van Robaeys) is on the menu and the last days it is being enriched with corn and peanuts. Medically the pigeons got the known vaccinations and that’s it. At arrival they get ‘yellow drops’ over the food and during the other days they work a lot with vitamins.
When the pigeons had a race on Saturday, they won’t come out on Sunday. On Monday and Tuesday they train 1x and on Wednesday twice. At the day of basketing they can train first around the loft. Then they will be fed fully. At 11h30 all pigeons are being basketed and Kurt releases them at 10km. At arrival all the sexes can stay together and can do whatever they want. Around 16h they are being fed once more and in the evening they go towards the basketing club.

Next assignment will be Chateauroux and also “Greta” will be basketed again. We are very curious but are already convinced that this isn’t going to be the last stunt of Team Platteeuw.

A lot of success from the entire Herbots team 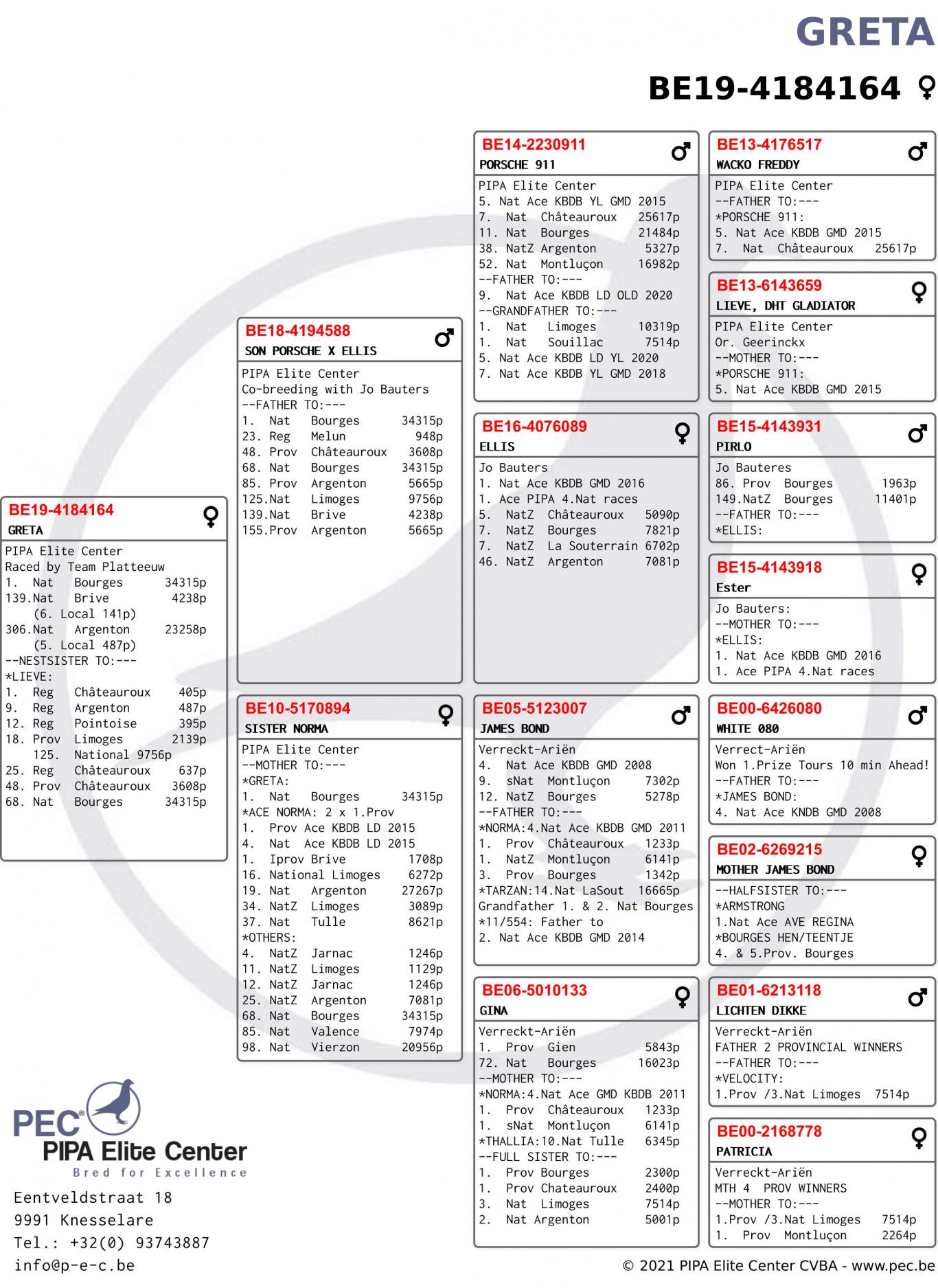