He still gets emotional when, with a nice cup of coffee in the spring sun, he tells the story of his miraculous pigeon, his "Wonderen Thiago". You would do anything for less...
We are visiting Zelzate, the north of the province of East Flanders and adjacent to the beautiful Zeeland (the Netherlands). Patrick Logghe (54 years old) lives together with Nancy on the outskirts of Zelzate.  They have lived in Zandstraat, a quiet street on the edge of the centre of Zelzate, for a very long time.
They both shine when they tell about what happened to them last racing season, season 2021.  And then suddenly you have a real crack, a pigeon that makes the whole of Belgium and by extension the European pigeon world blush with 2 great performances.

Patrick is also one of those players who literally fell into a pigeon pool when he was a little boy. He still knows them all by heart, the well known names in Zelzate who made the beautiful weather on the local and national races...the Mance Seghers and Desiré Acke of that time!  In every street a few fanciers forged together by a lot of enthusiasm in the local pigeon lofts...it has become nostalgia. Pigeon sport has changed, with less players it has become top sport....but the satisfaction of seeing the pigeon come home has not changed, it is for that kick that many do it.
Patrick evolved as he got older from playing on the speed and middle distance to the real long distance. Not the middle-distance but the very long distance appealed to him and all efforts were made to succeed in this. He knew (the late) Frans Van Peperstraeten, the Dutch icon of the long-distance sport and asked for advice about buying real 'hangers-on' as they are sometimes called in Dutch. Pigeons that can hang in the air for 14 hours and, if necessary, can go up a gear the next day.  He got the very good suggestion to buy the (still quasi original) Van Wanroy's from the total sale of the Van Haaren pigeons.
And so it happened....Patrick bought at this sale a number of Van Haaren pigeons and also got some from Batenburg of the old strong strain. This became the basis of his present breeding team and Patrick tries to keep these 'old' lines as original as possible.
This basis was later completed with pigeons from Jef Van den Berghe, Remy Speltdoorn, the Nihoul family and since the last 2 years there is also reinforcement with pigeons from Noël Peiren. There is also a good and intense cooperation concerning the breeding of pigeons with Peter Van Dongen from Holland (who once was the proud owner of Klitshko - 1st national ace pigeon Dutch long distance).
Patrick and Nancy do not shun any effort when it comes to the care of the pigeons. The lofts (about 40 metres) are in perfect order and the care is top. All free time goes to the pigeons. In the backyard everything is well thought out and equipped to enjoy their hobby optimally and to give their animals the best care. All lofts are built or assembled by Patrick himself...and it is very good.

It doesn't have to be mega to be top!
Who thinks that you end up with a mega-colony at Patrick and Nancy's place, is wrong. Long-distance and very long distance races demand a lot of feathers and chunks but this does not mean that a whole squadron of pigeons is maintained and played here.

The breeding loft consists (for the time being...) of about 50 couples (including understudy couples) but this will be reduced to about 25 couples in the coming months. Patrick has got a good view on the pigeons he needs to keep for a successful future and a thorough selection in the breeding loft is in order.
The racing team consists of 16 old pigeons and 25 yearlings. The old pigeons are trained for the heavy long distance programme and the yearlings fly normally and with a normal preparation the races to Agen and Narbonne.  In the past, there was a test to race hens in very long distance (as well on widowhood as on nest) but it was not a success. Patrick recognises that this game doesn't suit him that much and he prefers to put his energy in the classical widowhood game with cocks.
Until this season, the last 2 years, they only fed a simple but solid moulting mix.  This has now changed into the Beyers Jellema mixture, completed with Matador Energy Turbo the last feeds before basketing. On top of that, there are some (simple) supplements, without exaggerating, and the case is closed as far as food and supplements are concerned.
From a medical point of view, Patrick leaves nothing to chance and goes to Domien Van Acker of Belgica de Weerd for a weekly or late-say, very frequent check-up. They consult thoroughly and act or react when necessary and only on Domien's advice.  If really necessary, the products of Belgica de Weerd are used to get rid of one or another medical problem.
The pigeons come together (depending on the weather) in March and April and are then trained. In warmer weather they train twice freely at home.  Their behaviour is well observed and is the barometer for their condition, according to Patrick.
The pigeons are preferably basketed as calmly as possible for the heavy races and the truck box is left closed as much as possible. The quality has to do its work. A nesting dish at basketing is more than enough to activate the "on" button.
Before we talk about the ace pigeon...it is not a one-day flight at this loft. In the past they already achieved very strong results in very long distance with for example 16th national Narbonne, 25th national Narbonne, 8th national Barcelona, 46th national Barcelona. The 375/19 flew again a title of 2nd provincial ace in very long distance and 6th national ace to Zelzate !

My name is Thiago....Wonderful Thiago

It is a very beautiful pigeon in the hand, very strongly made, a very firm back, you do not feel that he has breech, a beautiful wing, a soft plume and a telling eye.  If it were not that we know in the meantime that he also flew a beautiful palmares, it is in any case a pigeon to have on a breeding loft.

In the meantime, this stunner is called Thiago (named after their grandson) and because he won the title of ace pigeon of Belgium and 1st European ace pigeon in long-distance races as a yearling, we have added "Miracles" to it, you would do for less!

He had already given a sign on the approach flights that he knew his loft. On a preparation flight from Vierzon he was the 4th pigeon of the racing team. As a yearling with very little experience, it was clear that he had a lot to offer. 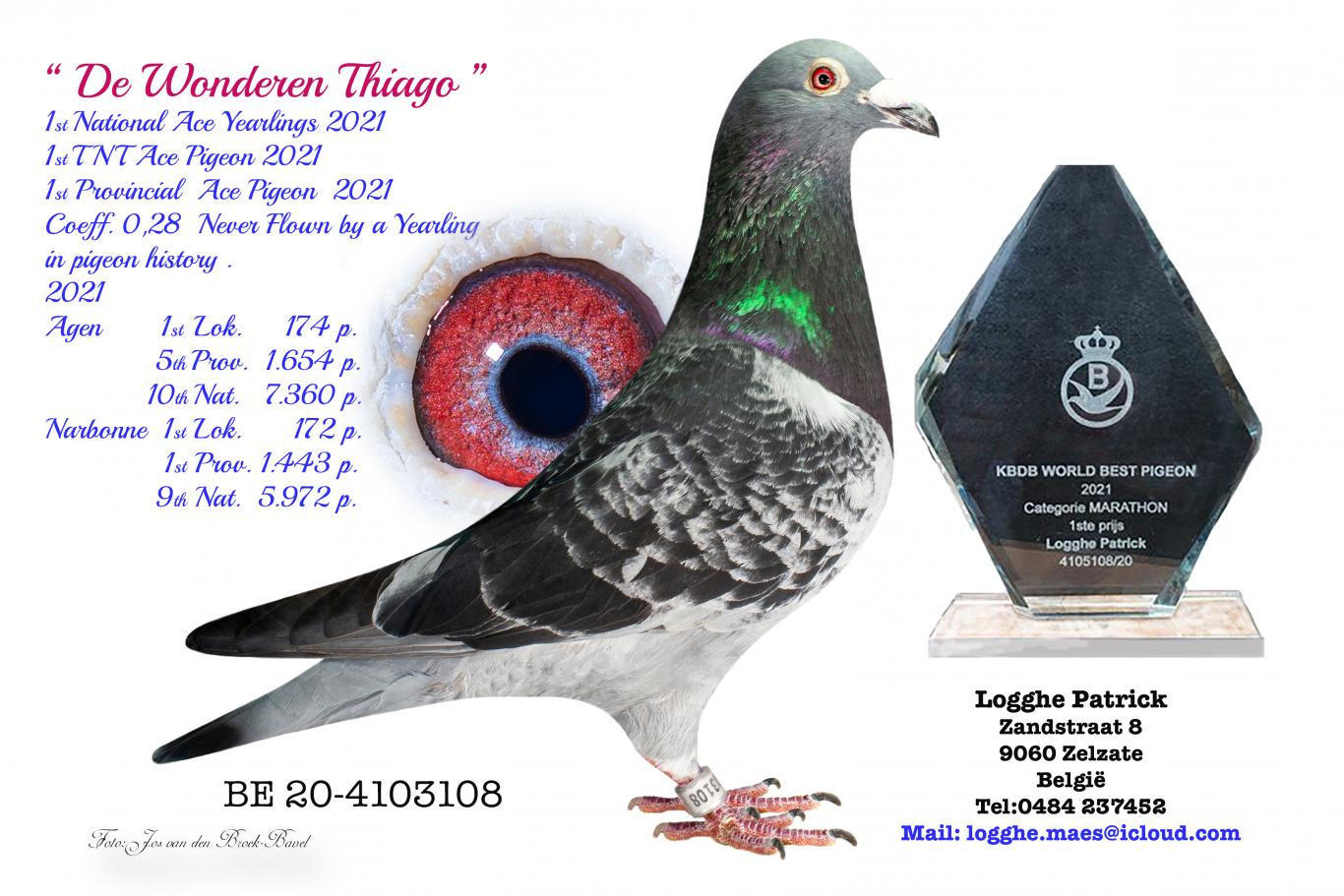 He has a 5 star pedigree. His father is the breeding result of 2 pigeons from the Nihoul family from Senzeilles and this from the line of Timide and L'Eclair.  His mother is again a 100% Remy Speltdoorn pigeon (out of the line of the 2nd Primus Interpares) and the best breeding lines of the top loft of Remy.

Miracles Thiago is a calm, wise pigeon. Calm on the loft and calm in his behaviour. In the meantime he is coupled with the best hens of Patrick and also with top hens of other lofts. The offspring is very nice and it is clear that the beautiful model of Thiago is also passed on to his offspring.  It would not be surprising if these would also produce strong performing pigeons. 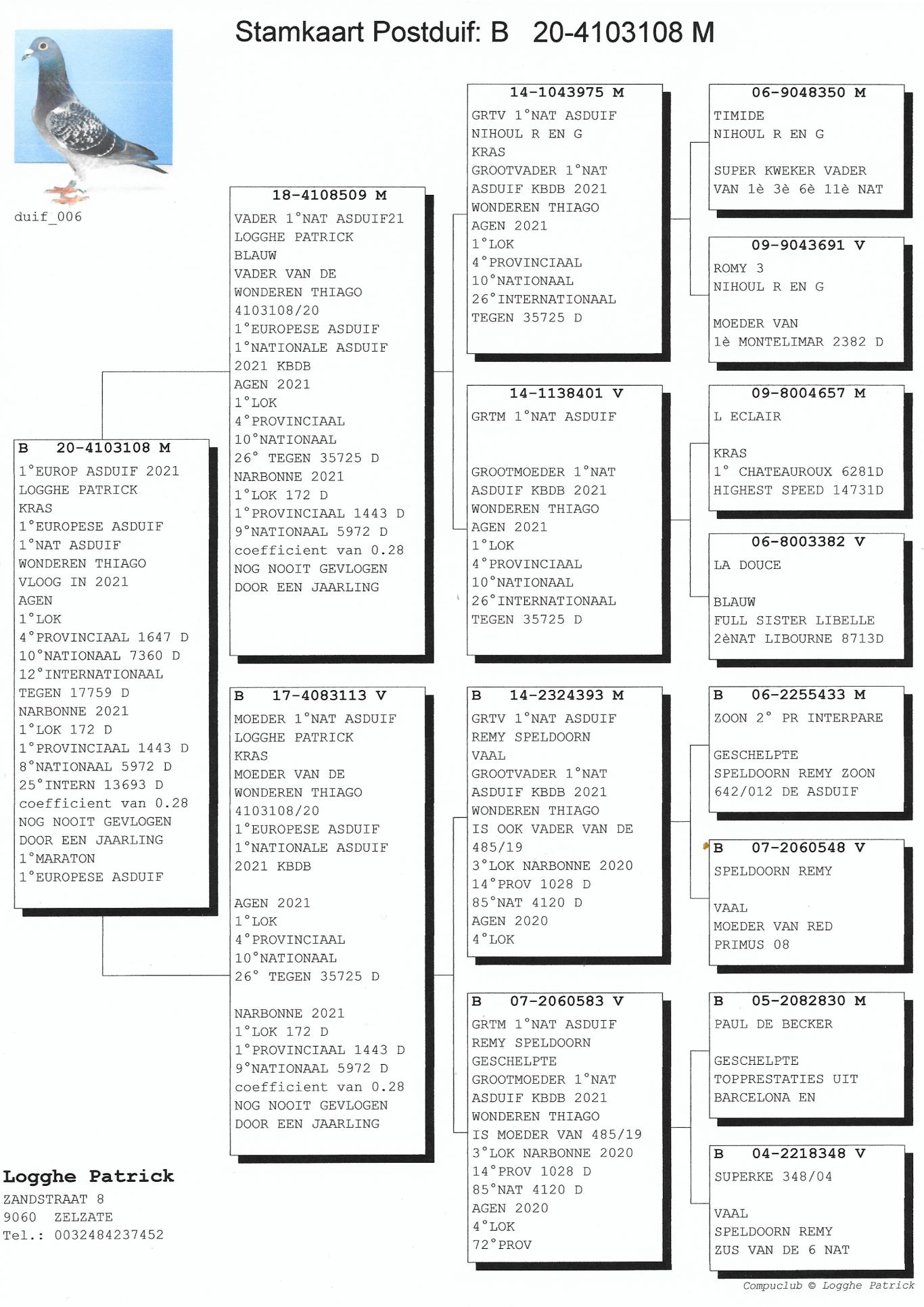 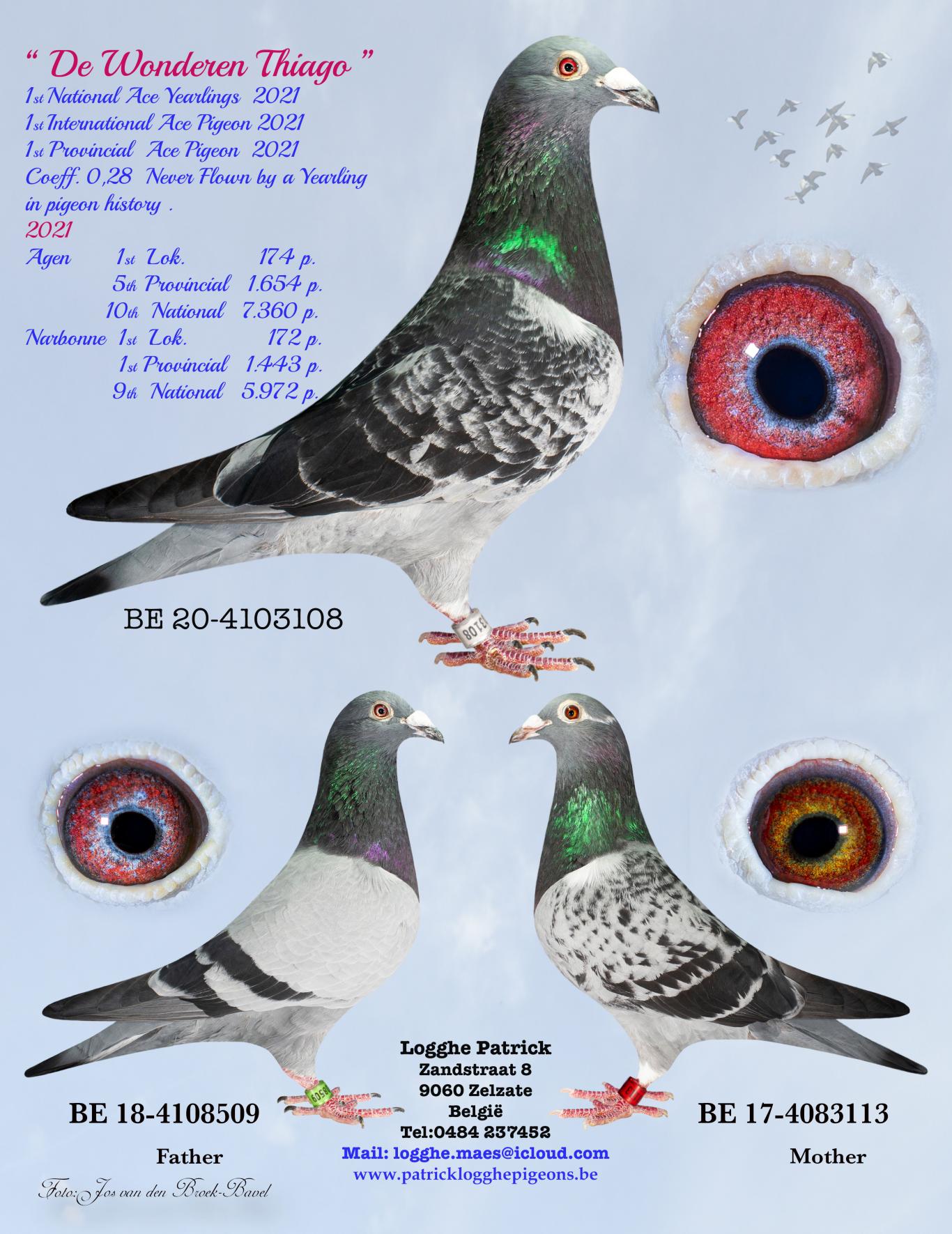 A bright future awaits them!

It was a satisfied couple that explained with great enthusiasm and drive about their passion, their hobby.  They also want to thank very special their regular pigeon friends Geert Weweire and Johan Schrijvers for their help, advice, support.

With such quality on the lofts, such dedication, we would be very surprised if next season there would not be some top again in Zelzate!