Mevlüt Tekin & Ramazan …with “Sultan” and “First Lady” as base breeders !

Winning the first 2 prizes on an International race is something that only few fanciers ever experienced, but Mevlüt Tekin and his uncle Ramazan from the Dutch city Medemblik (the oldest city in the province of Friesland) realized this in 2016.  This unique result made that they now belong to the best long distance fanciers within the very strong ZLU group of the province of Northern Holland.
Those two amazing pigeons, namely “Sultan” (winner 1st internat. Perpignan) and “First Lady” (winner 2nd internat. Perpignan) place Mevlüt on the International marathon map, everybody knows them since this amazing achievement on Perpignan!
The nice thing to the entire story is that “Sultan” and “First Lady” still have a breeding box in Medemblik. Mevlüt and Ramazan could resist the temptation to the high offers they got and didn’t sell their two top pigeons. This because they want that these super pigeons will become the future base breeders on their breeding loft or in other words the solid foundation, the golden base of their current breeding loft.
This was their goal when they choose to race the marathon races 7 years ago and fully concentrated on the extreme long distance pigeon world. It is this drive that they invested a lot in the building of their breeding loft. To bring this to a higher level they visited amongst other Luc Wiels (Roosdaal – B – who won Barcelona International in 2013) and Hugo Batenburg. They got top pigeons over there and coupled them against their own breeding pigeons and / or against inbred children out of them.
They also strengthened their breeding loft with children out Frederik Leliaert’s “Tarzan” and “Horus” and with several direct children out of and a full brother “New Laureaat” (1st Internat. Barcelona ‘13), children “Special One” (1st internat. Barcelona ’15 - now owned by Batenburg-van de Merwe) and with children out the proven breeding strain from “Zwart Goud” (Jellema).  Also Kees Droog (Andijk) was paid a visit and they went home with a half-brother from the 1st national Pau. Last but not least are the off spring of the known “Betuwe Koppel” (Gerrit Veerman - Volendam) who are very promising. 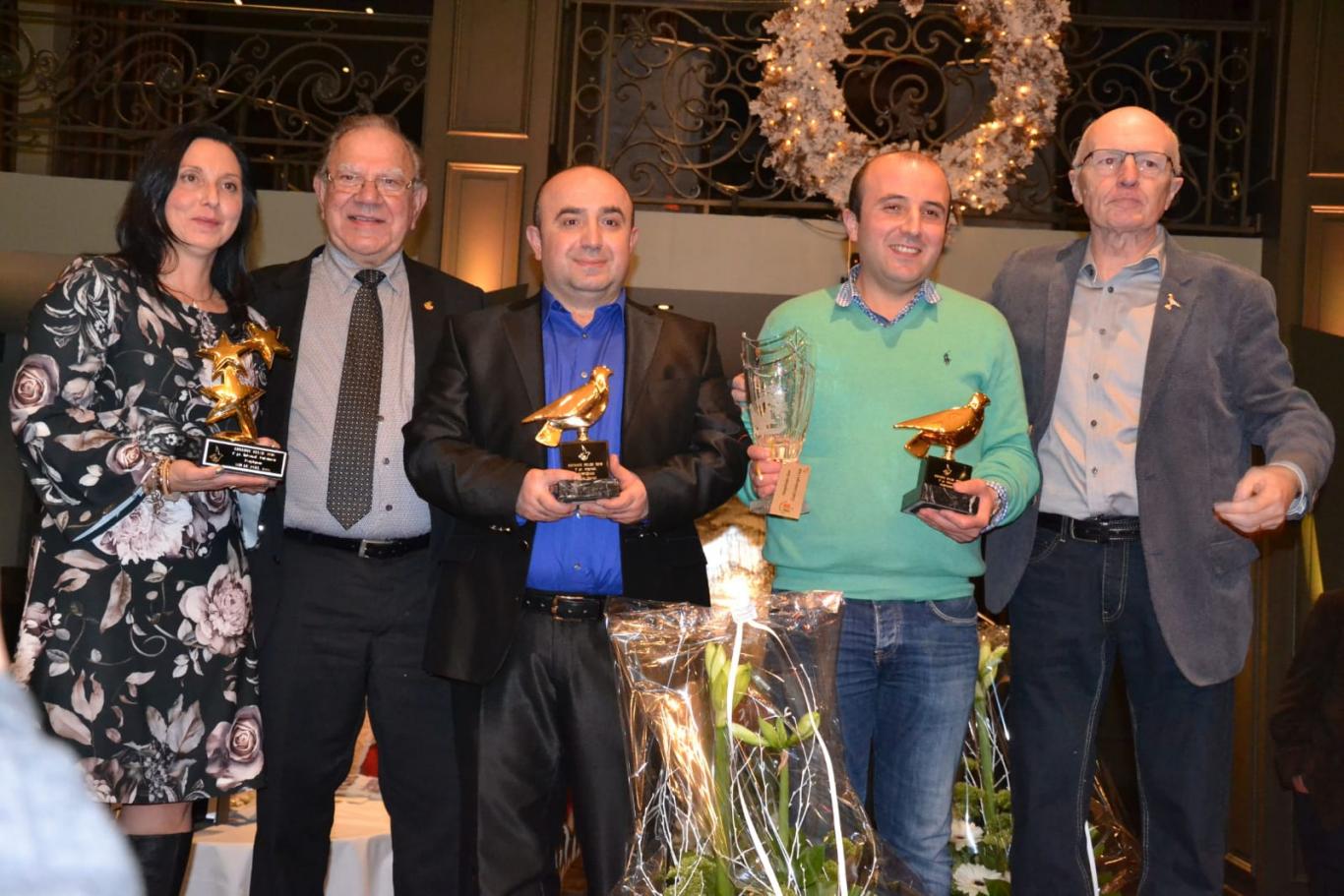 The breeding loft from uncle Ramazan exists out of 24 breeding couples. The racing team from Mevlüt exists out of 13 2-year old couples and 30 yearling couples. They always race on a nest position. In March all the racing pigeons are being coupled for the first time but this first breed will be replaced by stone eggs. The pigeons can breed until they leave the nest. After this breeding period the couples are being separated and will be re-coupled later in function of the racing data of the races they have to race.
For own use the Combination Tekin breed around 80 youngsters. These youngsters will be raced until 300km. The year birds will be raced until the first long distance race, and will be set back then (they only race some 100km races from then on) and will go the ZLU race out of Agen.
In the garden of  Mevlüt you can find a pigeon loft of 7 metres. A department of 1,8 meter for the youngster and the rest for the old racing pigeons. ‘Practice makes perfect’…also Mevlüt made mistakes where he learnt the necessary lessons in pigeon sport. Let’s go back to 2014. The pigeons that were born in 2013 (in total 40 pieces) had their first important race out of Agen and even that everybody in his neighbourhood had pigeons home, there wasn’t a single feather in Medemblik at Mevlüt and Ramazan. Mevlüt did prepare the pigeons very well for this race with even 4 weeks rest upfront. This story came up one year later (2015) when they went for a coffee at Kees Droog. He told them that the 4 weeks rest before the race was what ‘killed’ them. The pigeons didn’t have enough rhythm in their wings so they got tired very soon. So that needed to be adjusted and from 2016 Mevlüt paid extra attention. His first race was traditionally Agen ZLU. They won on this race with the old pigeons 3 within the first 85 national. What a nice business card to give around. His second race was one with a golden ticket…1st and 2nd International Perpignan. This was also their 2nd race of the season. In short…very extra ordinary!

The arrival of the Perpignan racers was also something special. While Mevlüt was out watching very early as from 4 o’clock hoping to clock a very early pigeon, his mother came out by half past 4 and said ‘what a stupid pigeon fancier are you, you are waiting for a pigeon and on the garage there is a pigeon waiting for you.’ Now Mevlüt couldn’t see, from the spot he was at, the corner of the garage, but he went to have a look anyway to be sure. In the first instance he thought it was a strange pigeon but when the pigeon looked at him this one flew immediately to the loft and it turned out to be ‘Sultan’. From that moment on it all went very quickly, making a phone call, call him in, and so on…and while he was busy doing this he heard another beep. This turned out to be ‘First Lady’, an incredible high light called in. The rest of the story is known by now.
The winning pigeon is ‘De Sultan’. He won earlier that year the 732nd National Agen ZLU. His father is 75% from  Batenburg-Van der Merwe and 25% the famous Aarden-strain from Hein Oostenrijk (via Nico Volkens). This cock won also the 228th National Barcelona and the 95th National Perpignan in 2014. The mother of the winning pigeon is also partly Batenburg-van der Merwe crossed in with an inbred son of “De Paarsborst” via Piet de Vogel. The second pigeon was hen “First Lady”. Her father is out of an inbred coupling to the Betuwe-couple from Gerrit Veerman. In this inbred coupling we also see ‘Gerrit’ who is to be found in many good pigeons from the family Hendriks from Zuiderwoude. They have a very good friendship with the family Hendriks. The mother of “First Lady” is from Henk van der Wielen from Boven Leeuwen out of his ‘Dax’ strain.  Mevlüt got this hen a while ago when swopping pigeons with this sympathetic fancier. These two top pigeons are basketed on picked eggs. On Agen they were on the same position.

THE TOPPERS ON THE BREEDING LOFT 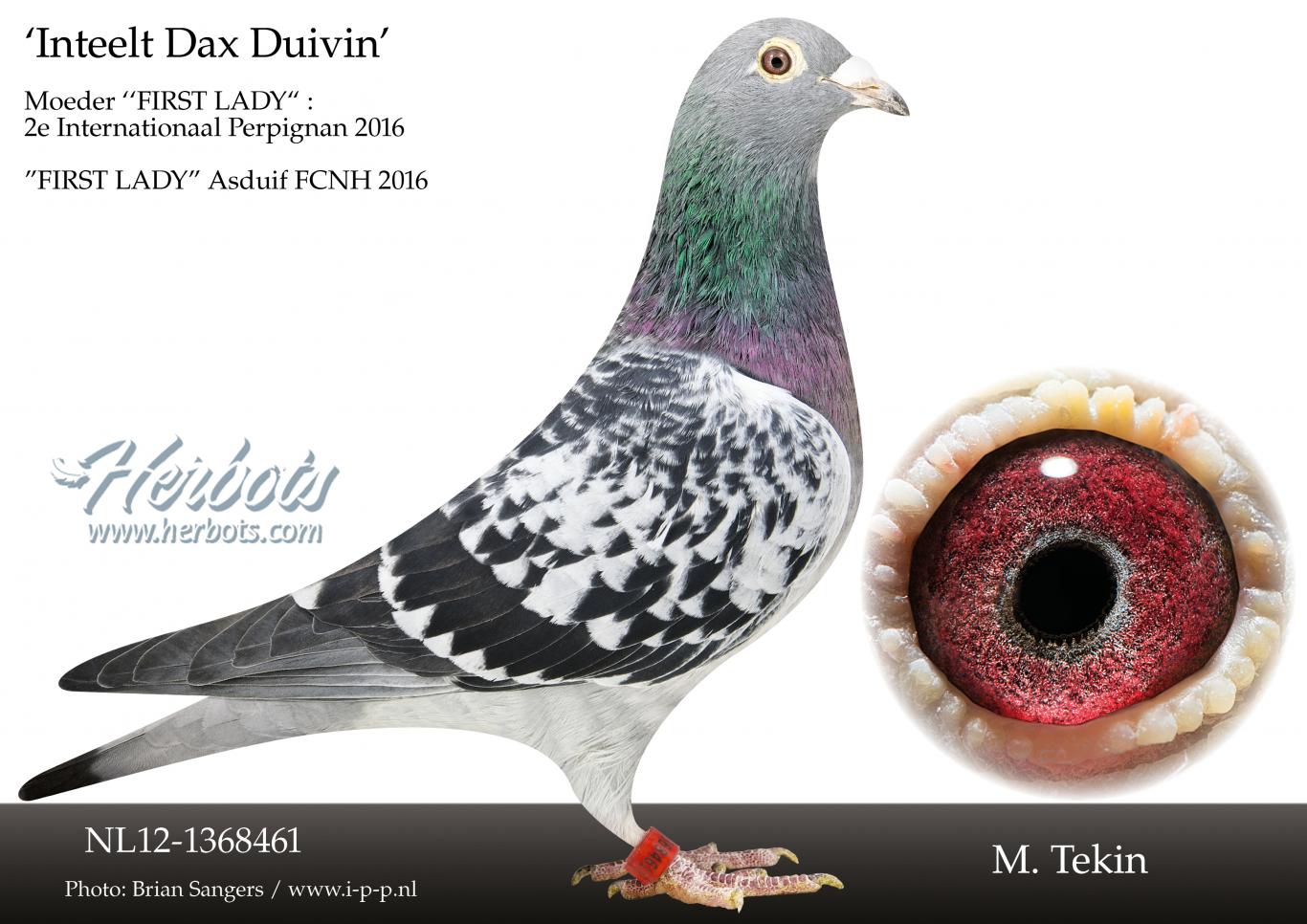 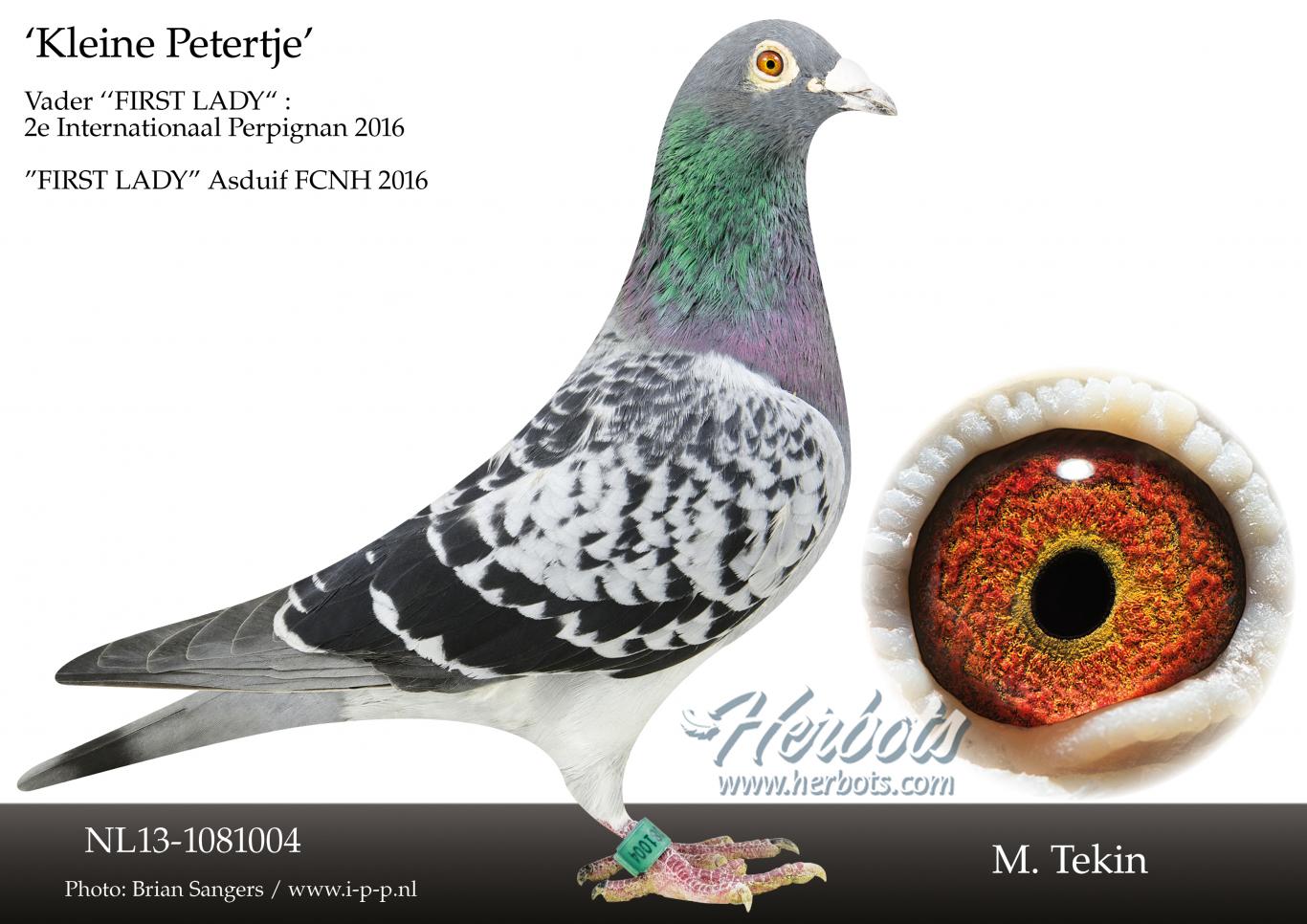 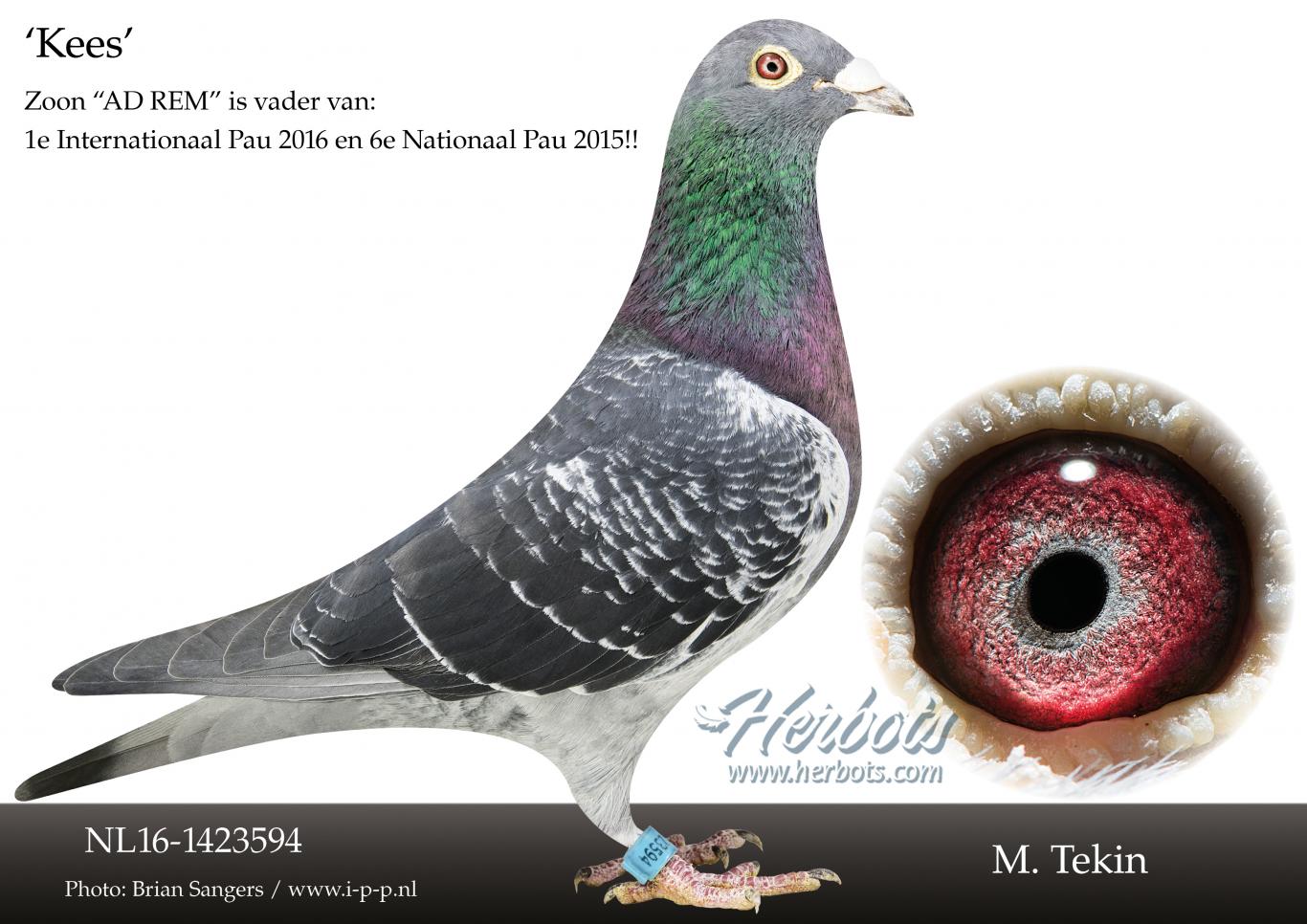 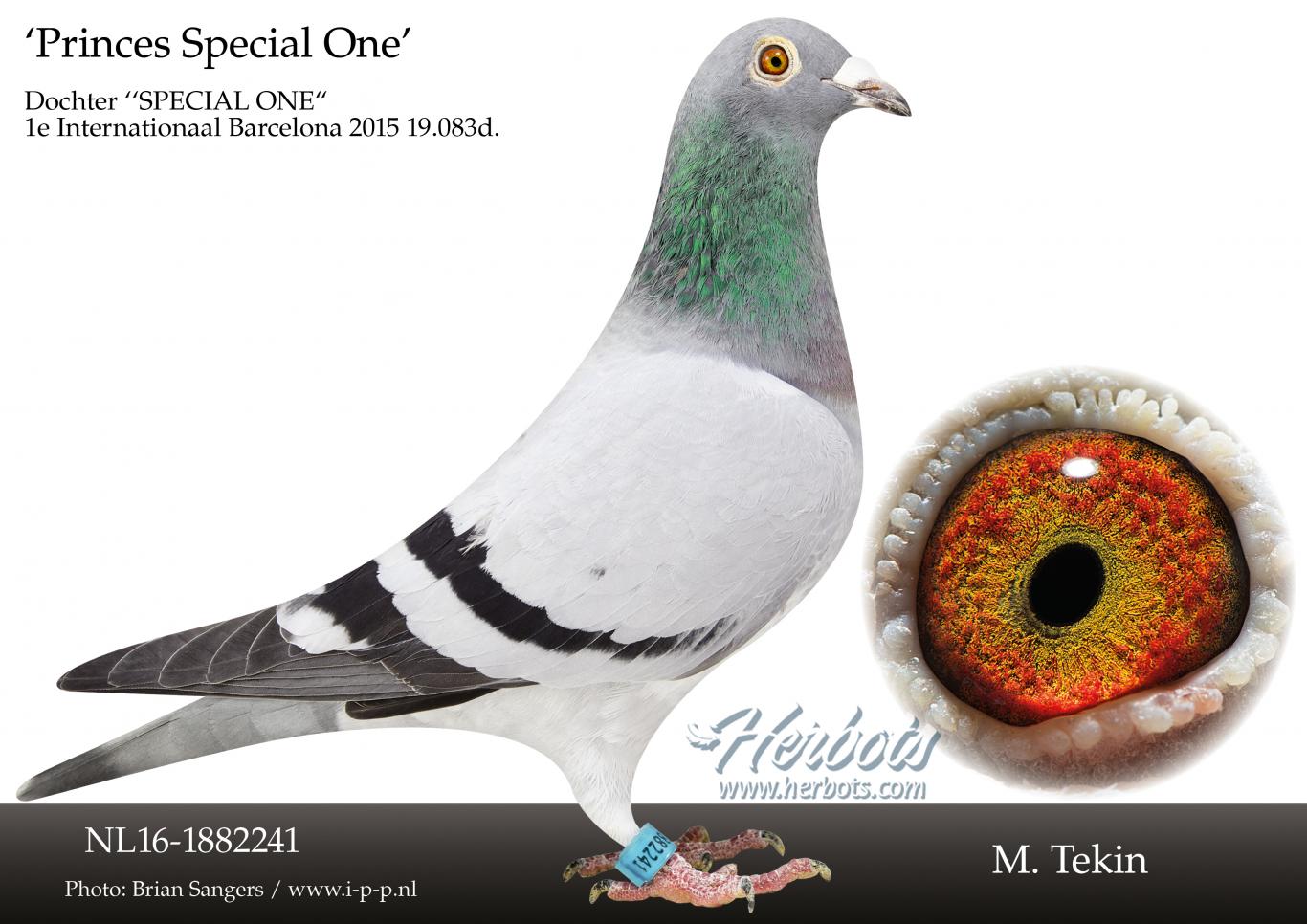 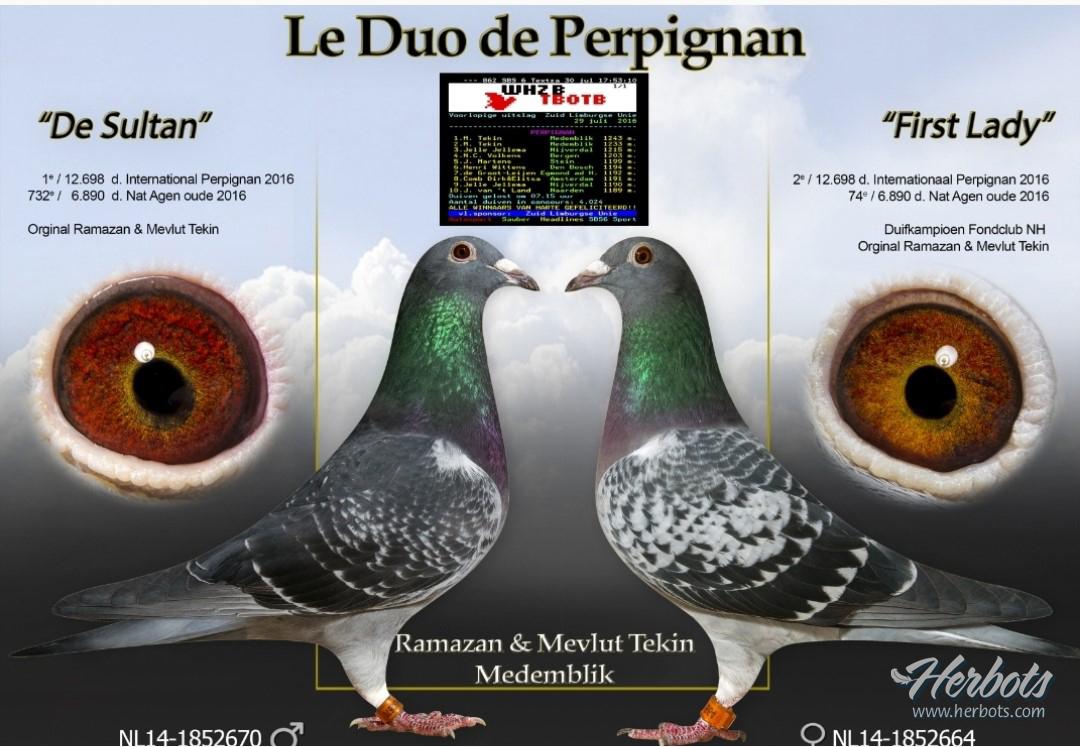 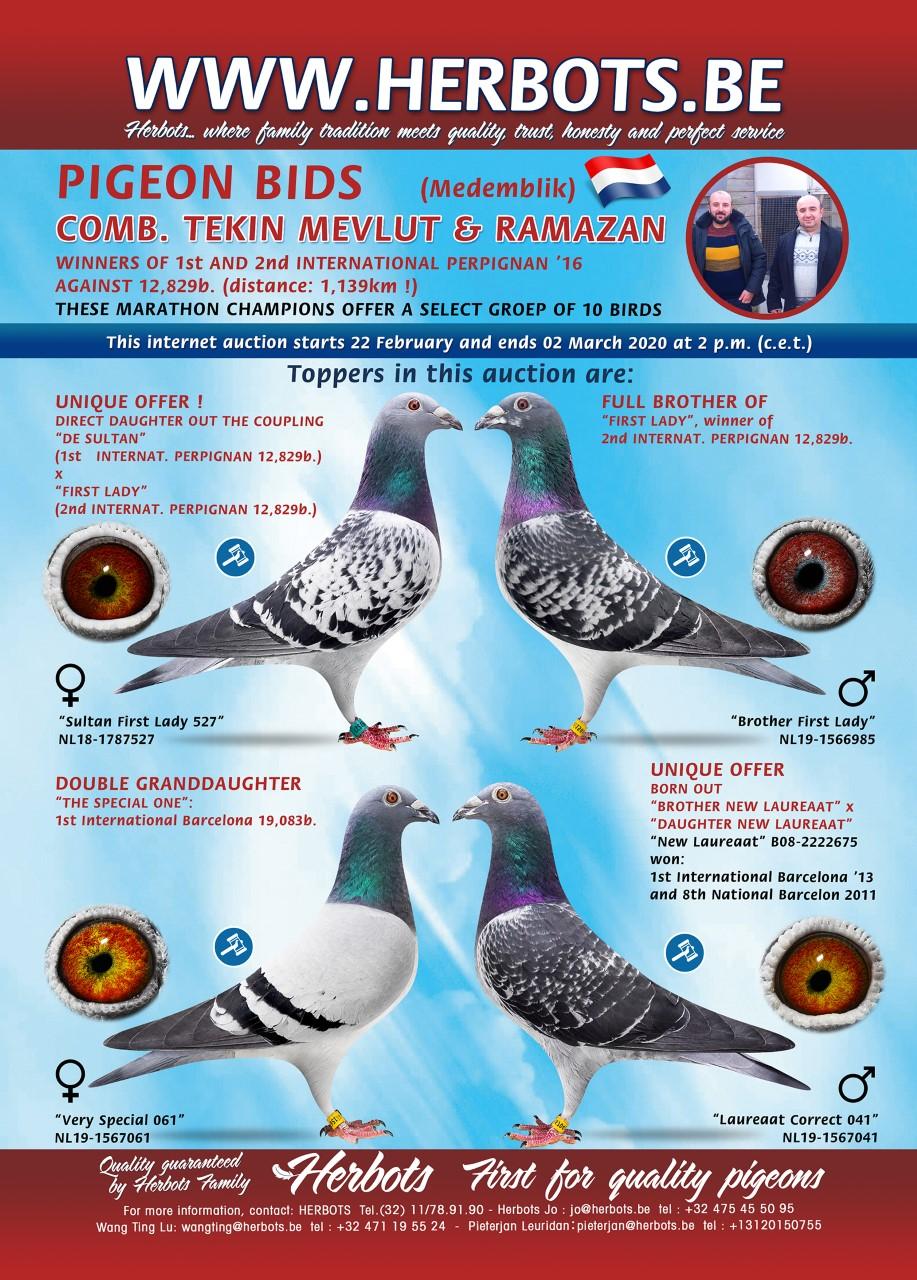 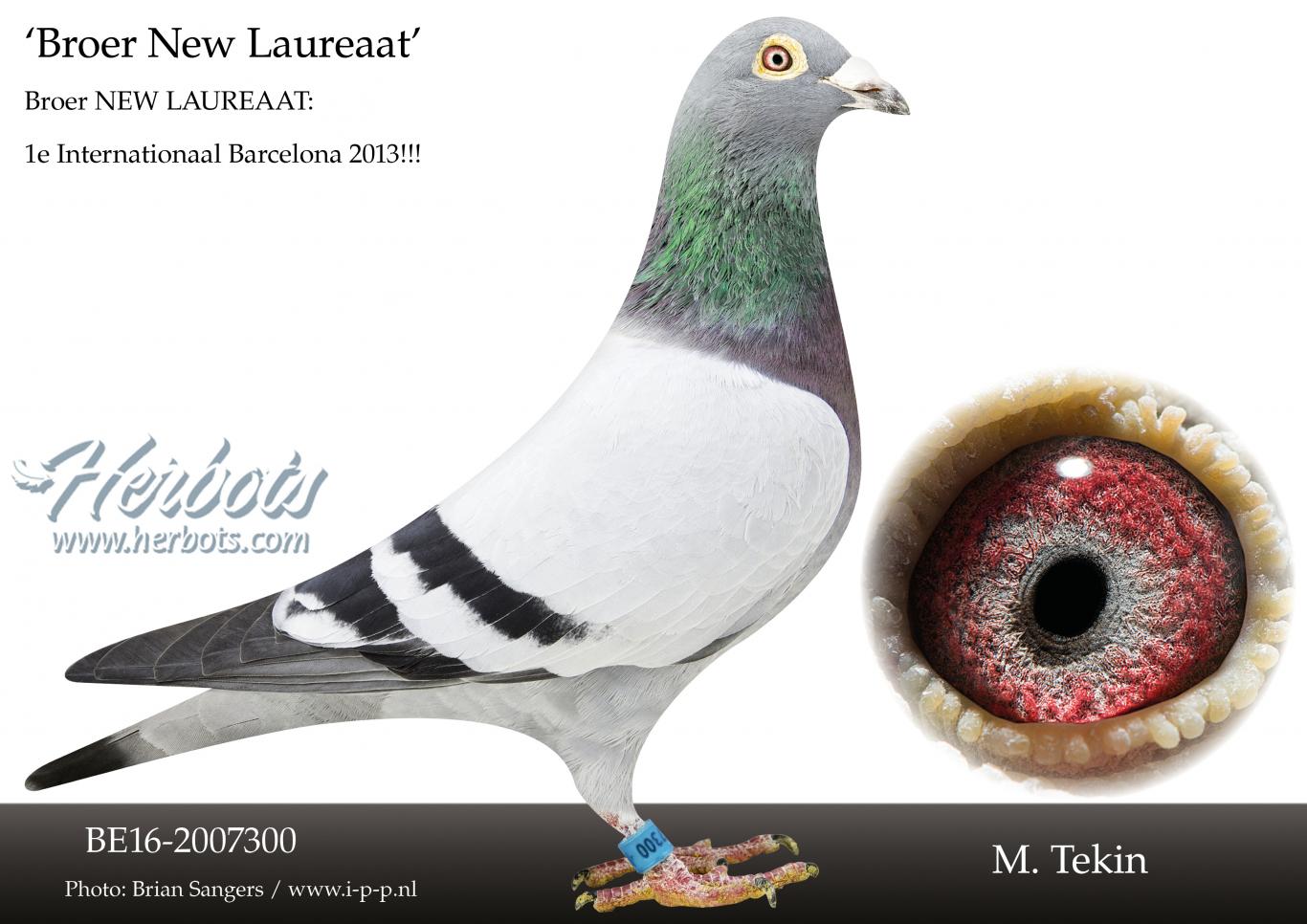 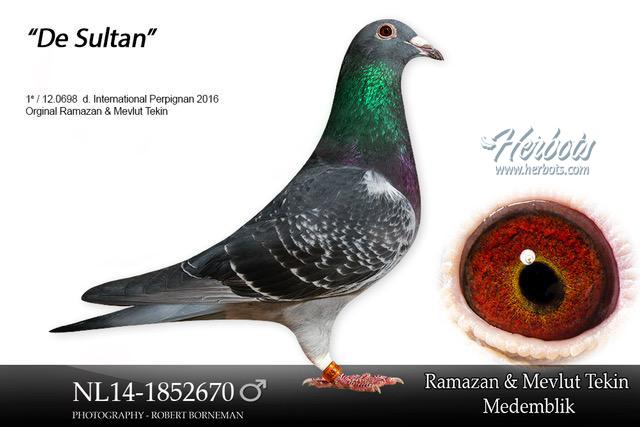 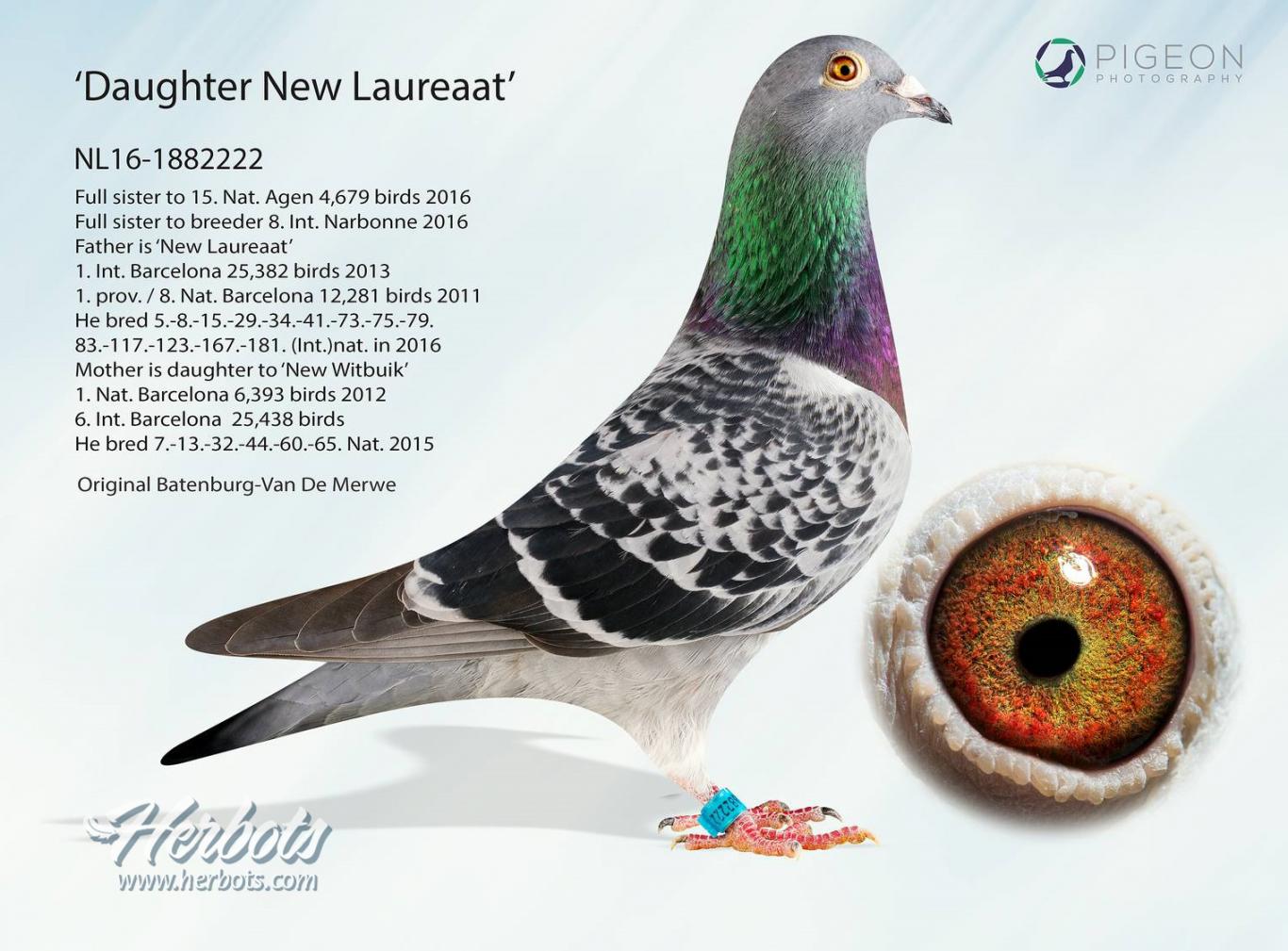 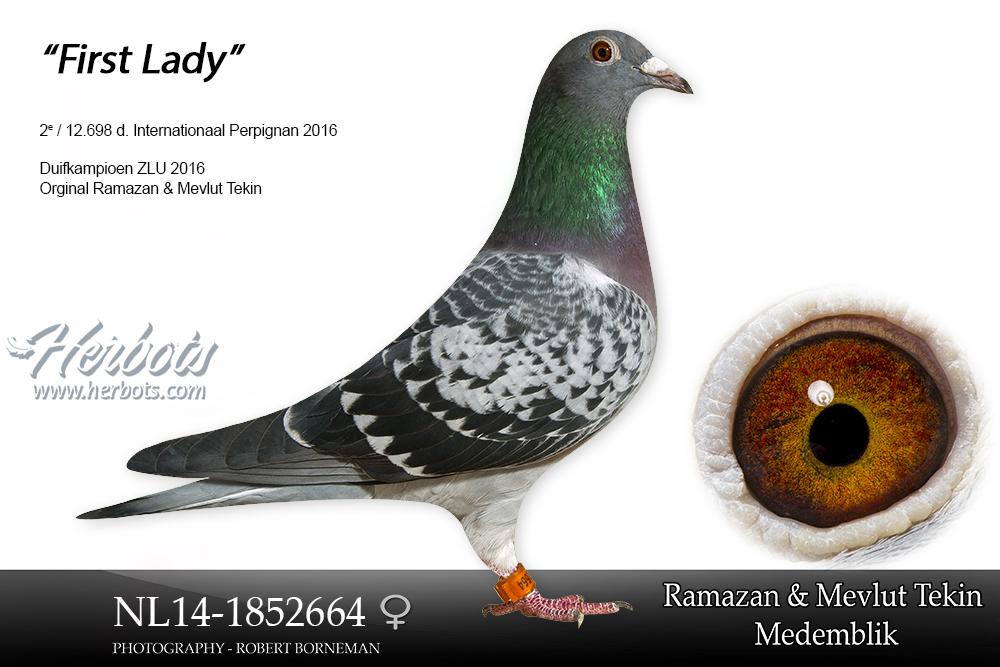