When you talk to Ronny, you find out that to him only one thing is important; the heavy middle distance with national release. “When you participate to these races, the birds select themselves”. There’s one big difference between the middle distance and the nationals; the pigeons have to learn to get out of a large group, releases of 30 till 50.000 pigeons. At that moment, they can’t let them being influenced by the mass but they have to chose their own way back home. Of course, it wasn’t easy in 2018 because the pigeons of the provinces of Limburg and Flemish Brabant, had “to climb an extra mountain” every week again. With wind at their head and a very low speed, the birds at this side of the country had a much more difficult job to do, a lot more difficult. The efforts that these birds had to do, took a lot of energy. At that point it’s very important that they can recover well so they’re ready for the next race. Here for, Ronny uses a lot of Röhnfried products. At their arrival from the race, they receive electrolytes, Mumm (glucose and vitamin C) and also Rotosal in the drinking water. Over the food; Gervit W and KK protein powder (vitamins and proteins) to stimulate a super fast recovery. When the couples get separated, each bird receives a KK tablet (proteins).

The next few days: BT Amin and over the food, regularly oil and Ro200, which Ronny likes to use very much. Sometimes the food sticks because he feeds it “wet”, so the food is prepared and he immediately gives it to his birds. But once they know this, they eat without problems.

Of course, if you want to win, the birds need good food supplies; proteins, amino acids, KK are top products to this fancier, also Bt Amin, Hexenbier, Ro200, … you need to have faith, as well in the bird itself as the products you chose to use. Also the system is important, you need to hold on to it and have faith in it. Pigeons can only get into a good condition when they get the same for a longer period. They need to work to get the good condition. They become hard and soft in the hand and they won’t get “overweight”. On medical level, he completely trusts the “doctor”, like he calls his friend and vet Raf Herbots, whom he visits every 3 or 4 weeks. Nevertheless, the less medication, the better the results.

Like we mentioned before, there’s a big difference between the middle distance races and the national races. “This can often be noticed on the young birds that score at the top in the beginning but that doesn’t mean, these are the best on the nationals”.

Of course, there’s the influence of the wind and the mass but when everything goes as it should, when you did all that’s necessary, the better birds have to show themselves. Ronny always tries to “explode” on Bourges National toe. How do you do that?

The young birds are darkened from half of March till half of June. They’re learned very well: several trainings on short distances and several short races from 120 and 210 km (Momignies and Soissons) with the club. In this period, they’re driven by car at least twice a week at a distance of 30 till 50 km. About 3 weeks before Bourges, the youngsters get separated, they have to participate to a race of 300 km and when they return home, they get together. But the first time they come together before the race, is always before Bourges. It’s one of the most important motivations and they can stay together for about 2 hours and then they get into the basket. Every year again, this method was very successful. The week before the national race from Bourges, he also stops the training flights during the week. At that moment, it’s very important that his birds gain energy and power.

When we take a look at the origins; again prove that winning is in the blood. The more toppers, the bigger the chance of success. Of this Ronny is convinced.
Another important aspect to Ronny is his friendship with Gino Clicque. They contact each other by phone, 2 till 3 times a week and the last few years, about 50 youngsters move to Rummen and … with success!

Ronny knows what he’s talking about, he follows the advice of Gino Clicque but if you want to handle this system, you need to keep everything in control.

The old and the yearling birds stay on the “resting compartment” with an open aviary… a lot of oxygen makes sure that the birds as healthy as possible. Daily trainings but the partners, these are the cocks, are responsible for the motivation. These cocks each have two hens; the old ones could brood in spring (were together with their partners for 2 months) and the yearlings could watch. Afterwards, they came together with the same cocks and the one that arrives home first, can “party”, the others have to wait. Before basketing; one week the old hens get together with the cocks first and afterwards, it’s up to the yearling hens, … you have a lot of opportunities here.

The fact that pigeons that have to work hard need good food and a lot of energy is something Ronny takes care of very well. The birds always get a full trough and a lot of energy food. What they don’t eat is taken away at the next “meal” and this is taken to the “loose” pigeons. He likes to use a lot of condition powders like Ro200 and Entrobac in the drinking water; one week Hexenbier and the other week Atemfrei. Every 4 weeks, the noses are treated with Rozitol of Röhnfried, which takes care of a “free” respiration. The last few days before basketing, the birds receive Bt Amin (amino acids and vitamin B) and/or Blitz (iodine). For the medical advice, he visits his vet Raf Herbots and he follows his advice.

Another important aspect to Ronny is the quality of the feathers “they have to feel good in their costume”. That’s why they regularly receive Taubengold and Avidress Plus in the drinking water and over the food Avitonicum Aktif and often Pavifac beer yeast, during the moulting period. Every 3 or 4 weeks, he also uses Hessechol (Sedochol) over the food, also in combination with beer yeast or Avitestin to keep the intestins and the liver in optimal condition.

Ronny also has good experience with Blitz Forme, which often is an extra stimulus and it makes sure the birds become nice pink.

Here with Ronny Menten, the pigeon sport became a full-time occupation and hereby, he has a lot of help from his parents and his wife Ilse. The pigeon sport is practiced very punctual and he’s not afraid of a challenge or an effort. He does everything that’s possible because he’s sure of the quality on his loft. When you handle a severe selection, the results climb to the top.

Excellent from BLOIS of September 08th and 9 x top 200 on the last national race from Châteauroux against 12806 Young birds. 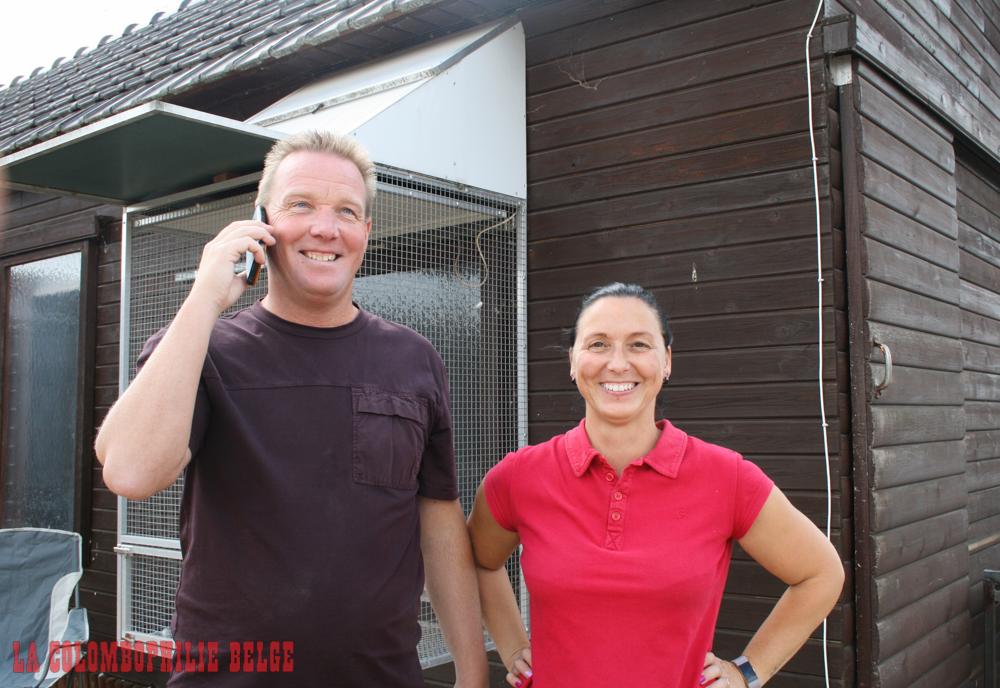 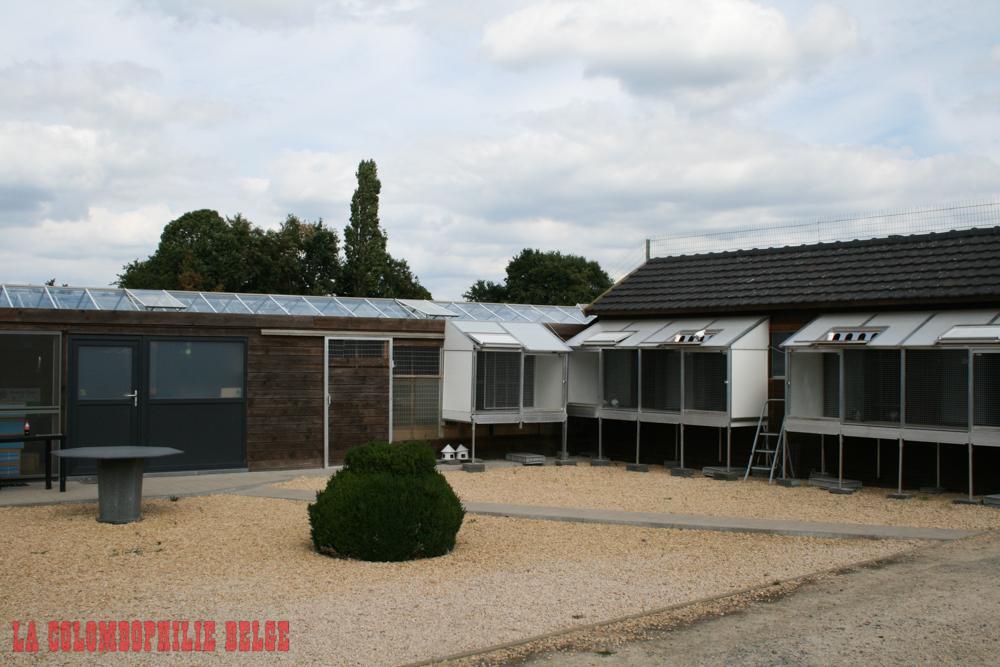 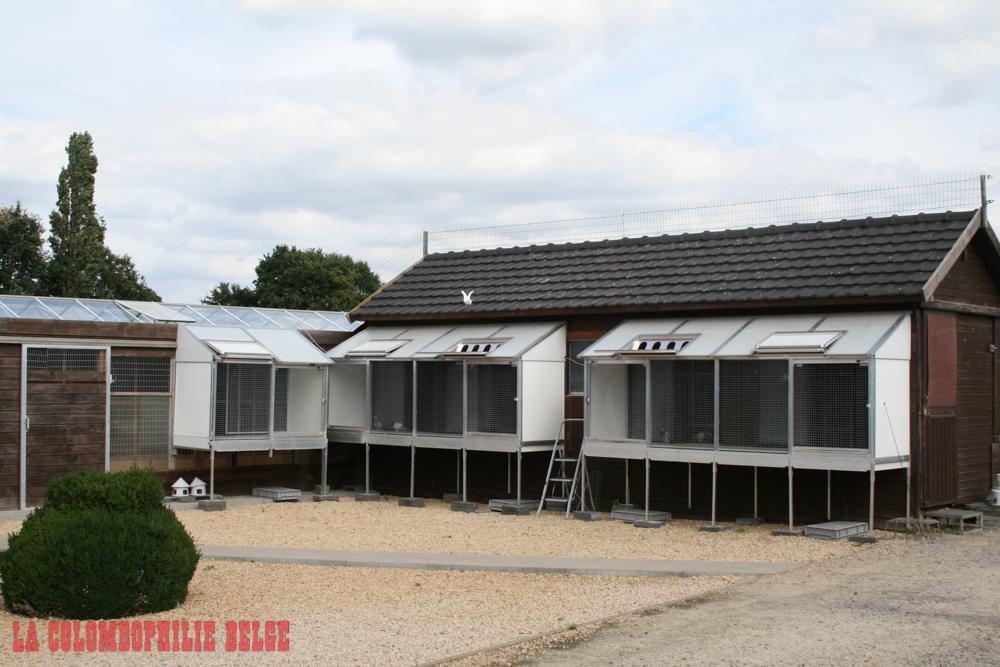 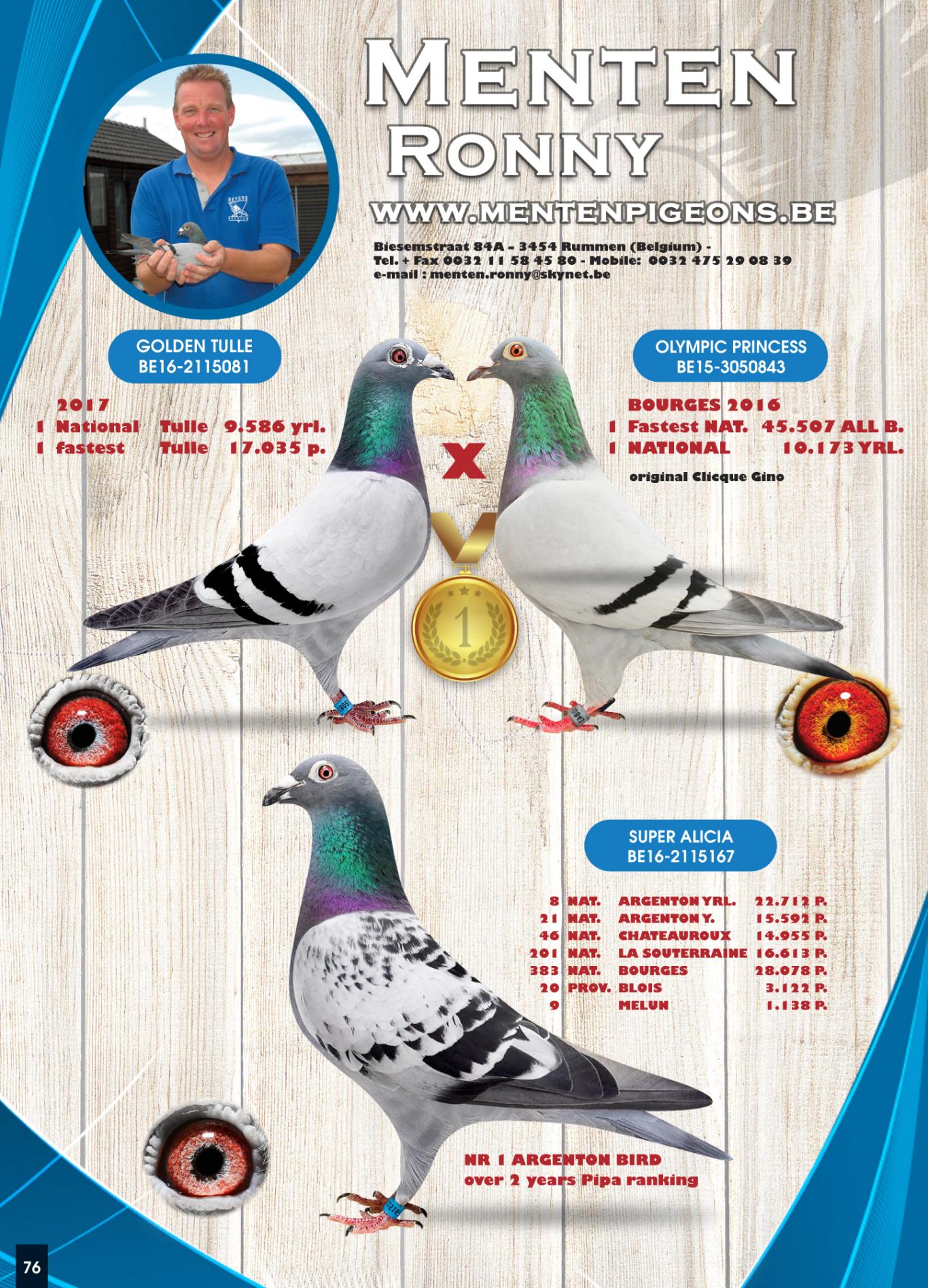