Loockx-Verbruggen from Tessenderlo? We know top pigeon fanciers Guido Loockx and Bart Verbruggen, well, 2 years ago they decided to join forces and form a tandem. In 2020, they played for the first time under their new name, Loockx-Verbruggen, from Guido's address at the Schoterheide in Tessenderlo. We don't need to introduce Guido anymore, we know him from his immense list of won championships , ace pigeons, olympic pigeons, national victories, provincial and inter-provincial victories, ... It all started with the stock cock 'Pantani', who took care of the first time in Blackpool on the Olympiad in 1999 as a representative for Belgium, later followed by the Olympiad pigeons 'Mr Blue Sky' (Dortmunt '09), 'Kai-Mook' (Poznan '11), 'Olympic Violetta' (Budapest '15). All toppers that still form the basis of the qualitative pigeons that can be found on the lofts.

Bart is not very well known in international pigeon sport yet, despite the fact that he comes from a real pigeon family and that he was raised by his father, grandfather and uncle who all were pigeon fanciers. Bart's story starts at the age of 13 when he was allowed to play with the 'worst' pigeons of his father's loft. His father made an annual selection of the youngsters, the 'good' ones he would play and the 'bad' ones were slaughtered by the lady of the house. Now it appeared that the lady of the house had put the wrong pigeons in the pan and so the 'bad, not selected' pigeons remained. These became Bart's first pigeons and he won with these pigeons a 4th place on the middle distance against 4.000 pigeons...so they were not that bad or maybe Bart already had it in his fingers?

Their joint story starts when Bart started to play on his own and bought vouchers from Guido Loockx, there was a click between the 2 and Bart stayed more and more with Guido when he 'collected' the vouchers, they speculated about the pigeons and when they basketed in the club they drank a beer together.

Now, so many years later, Guido accepted the question of Bart to race together, both Guido and Bart could use some help to perform the sport that is very labour intensive. Last season the pigeons of Bart of 2019 were switched over which went surprisingly well, with the result that in 2020 a team of yearlings and a team of youngsters of Bart joined the racing lofts of Guido.

They don't breed together, they each breed their own youngsters, about 200 in total, they all end up on the same racing loft, they get the same training, feeding,...etc.

This year, their joint efforts are immediately rewarded with, after a 2nd Provincial place on Bourges with the yearlings and a 3rd and 4th Provincial Bourges old, the Provincial palm on Chateauroux, here the remark is that they couldn't enjoy this victory very much because on this same flight, their best racer and 1st signed stayed behind...a victory with a remark... 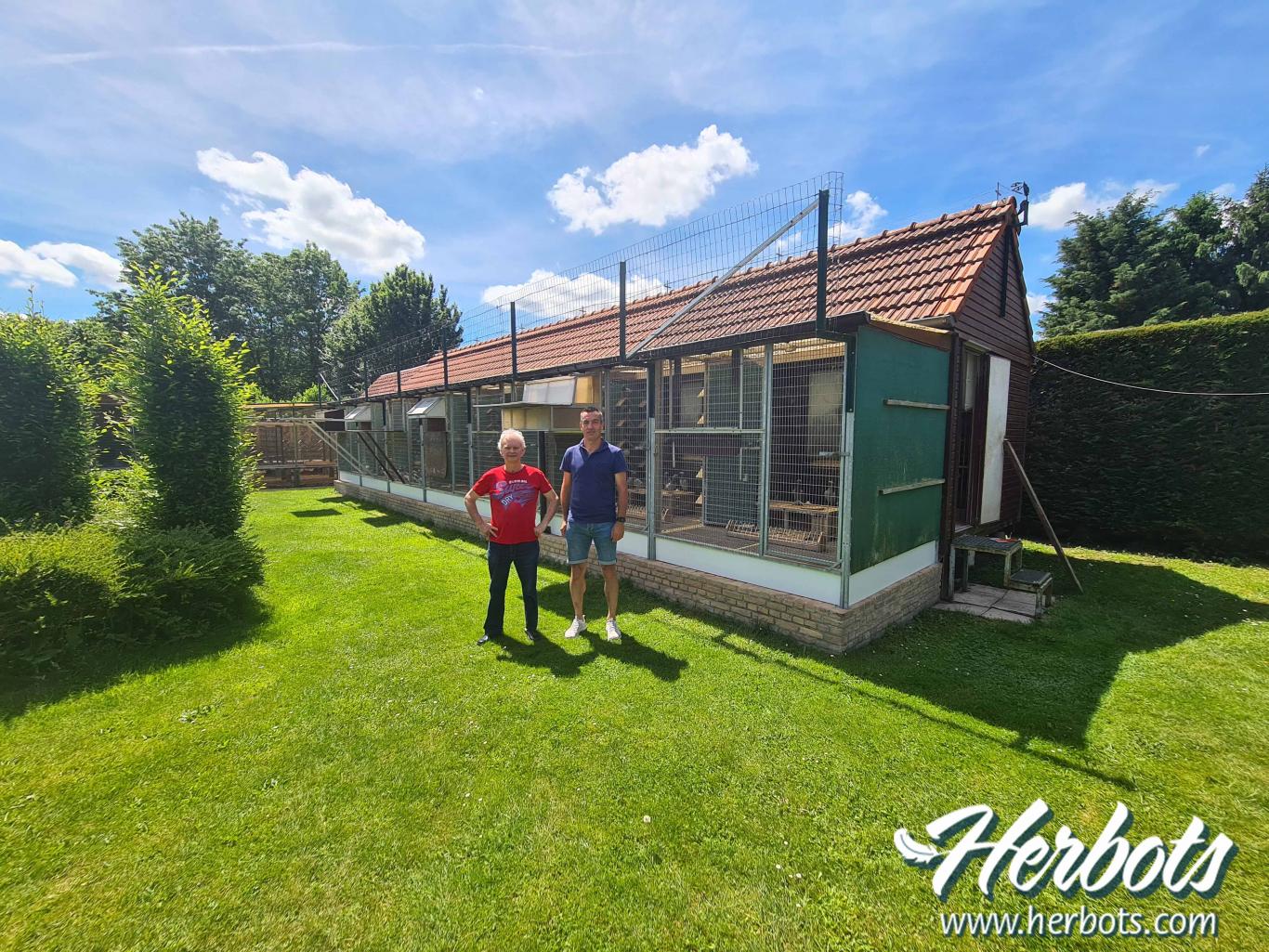 The winner, is a late youngster from 2019 that flew 1 or 2 Momignies in her year of birth. In 2020, due to her lack of experience, she was carefully trained in the first year and only flew speed races, middle distance races and 1 national race.

When you dive into her pedigree you will notice that she is not a stranger to the sport and that there is noble blood running through her veins which makes her achieve these results.
Her father flew himself a/o 2nd + 3rd  provincial. A brother of the father flew 1st prov. Tulle and a sister flew 1st  prov.
Her mother comes out of a pairing Satan (2 x 1st Provincial and 2nd National Montluçon) x Kai-Mook (1st Olympia pigeon Poznan).
All 4 of her grandparents descend from the famous Pantani line.

Anecdote: The pigeon which was 2nd  home today and is the 6th Provincial Chateauroux on the results list is a full sister of the provincial winner! 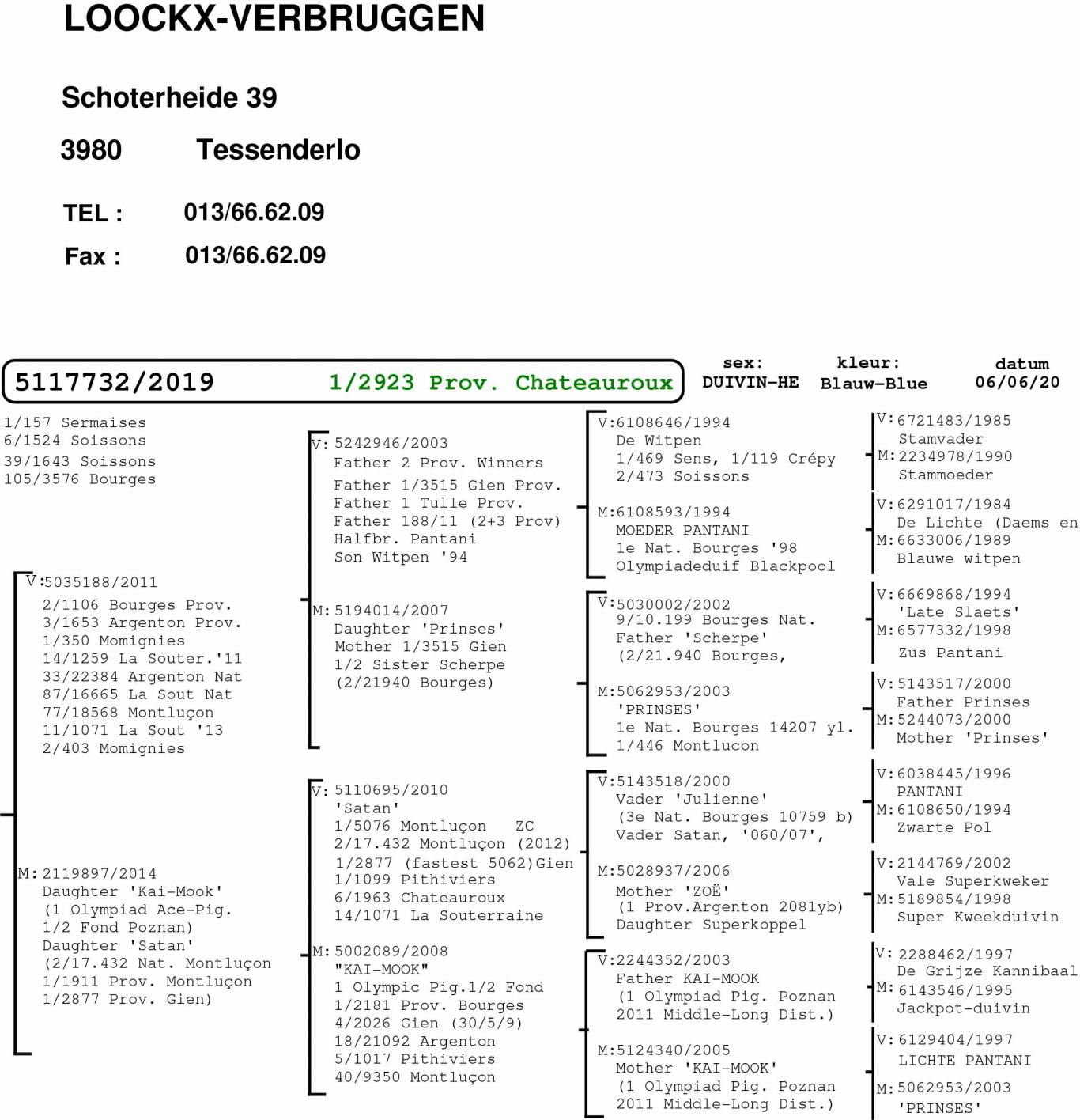 The provincial winner will continue with the national programme. As there is no national flight scheduled this week, she will probably fly Momignies or Soissons, depending on the weather forecast.

Chateauroux was a rather difficult race with several pigeons that were not home in the evening. Hopefully they will arrive tomorrow so we can go to Argenton with the complete team within 2 weeks. 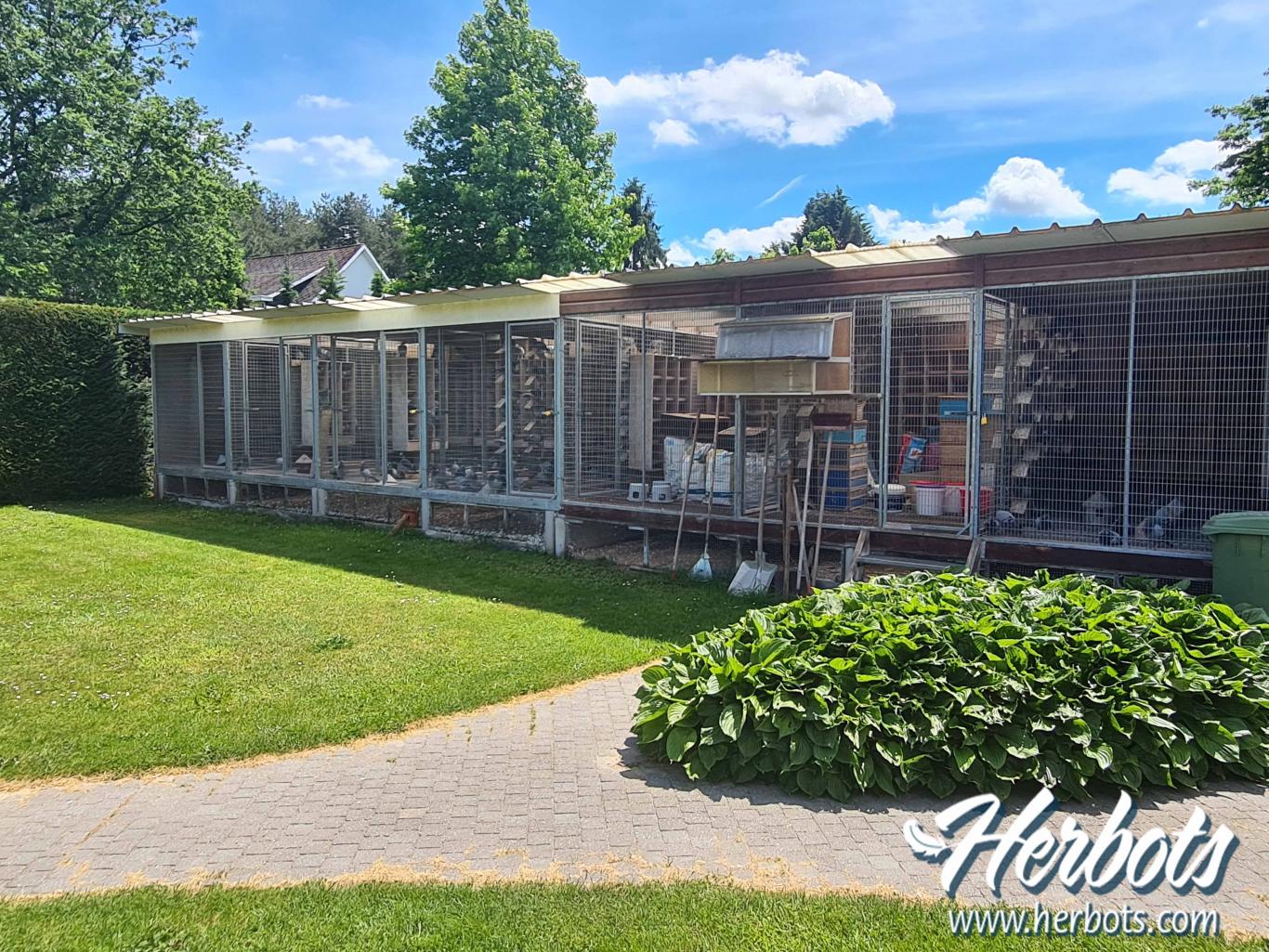 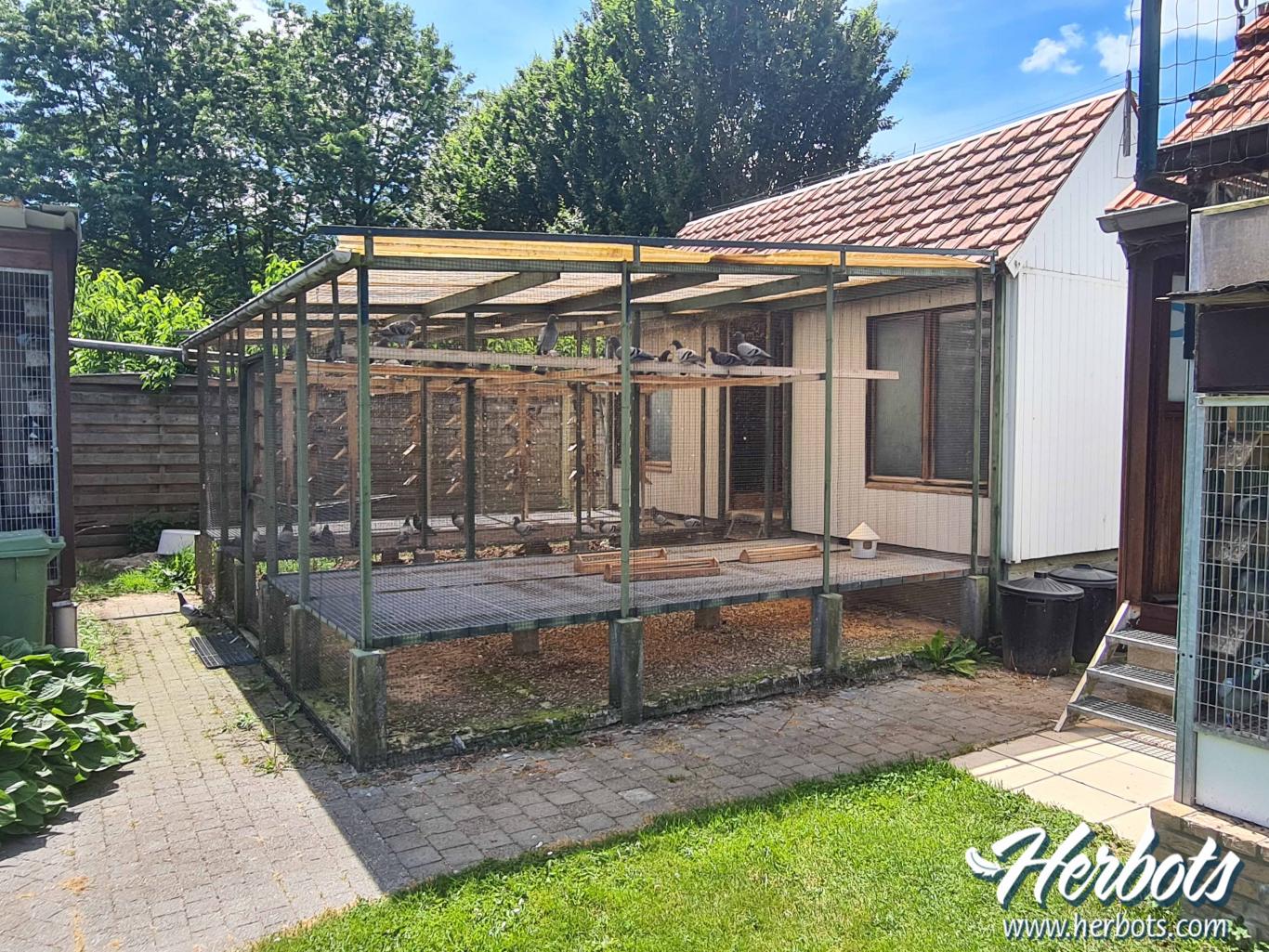 Guido and Bart, congratulations with the results already achieved on Bourges and Chateauroux. Hereby we wish you a continuation of super results the coming weeks! 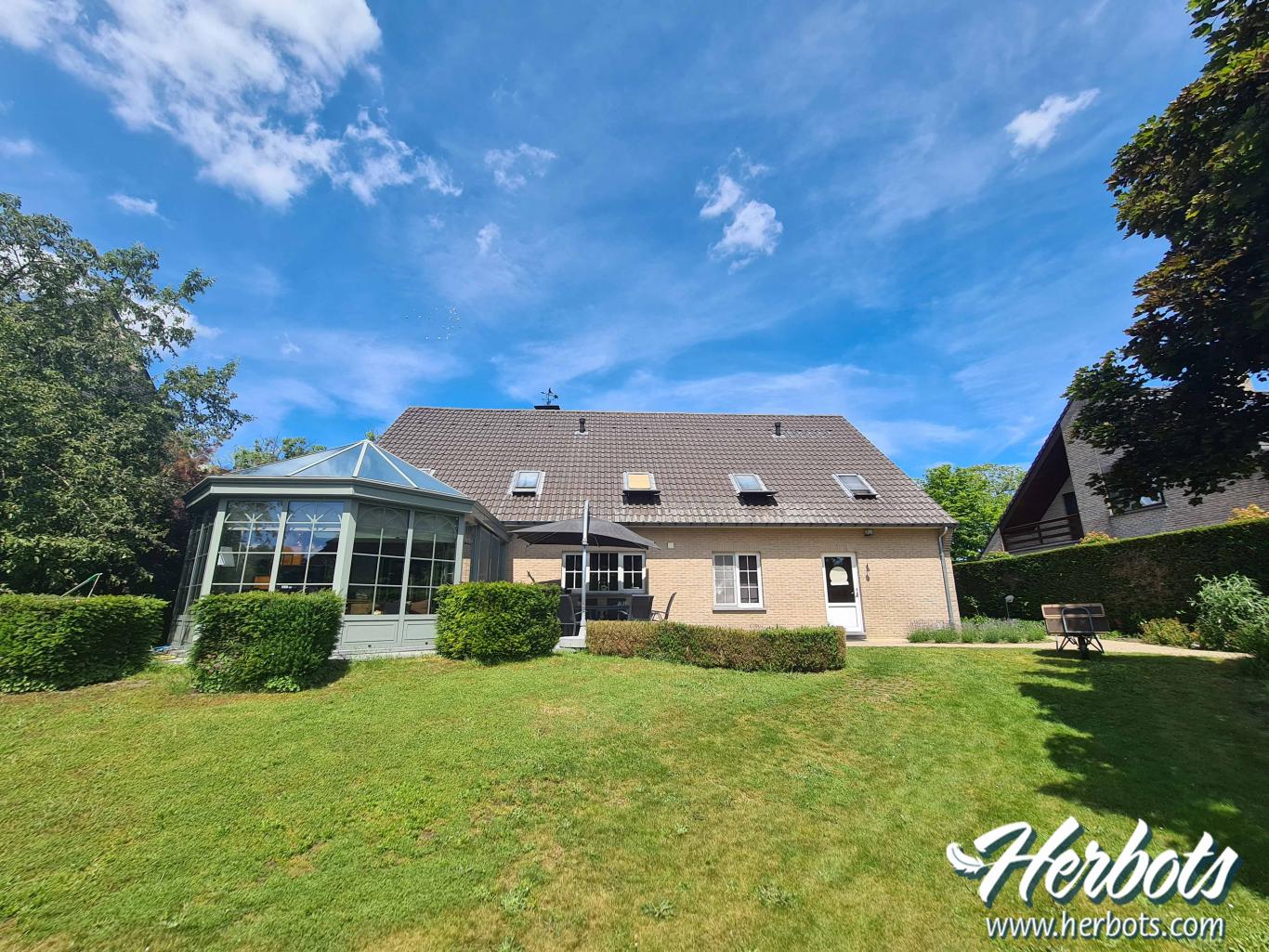