Onkerzele: It had already been noticed during the last 14 days that the Crucke pigeons did not tolerate much opposition and yet so smoothly took that first prize. So they won:
30/04: 1st Ecouen against 3,631 old and yearlings
08/05: 1st Noyon against 1,629 old and yearlings
Last weekend Koen basketed his 62 old and yearling pigeons for the Interprovincial race from Orleans and back the main bird was shot. His old hen "Golden Xiana" (B19-4032309) not only won against 11,735 old birds but was also the fastest of all 21,087 Orleans racers.

A performance of the highest level and herewith "Golden Xiana" follows in the footsteps of her mother "Xiana", which won as a yearling not only 1st provincial ace KBDB but also 1st national Argenton against 8,588 pigeons. This says enough about the class present in the Crucke house!

The basis of the Crucke colony starts with the own grey strain and was successfully enriched over the years with original pigeons from Marcel Aelbrecht (Lebbeke), Bert Vanden Berghe (Wortegem-Petegem), Anthony Maes (Waregem) and Chris De Backer (Beveren-Leie - last year 20 youngsters were exchanged).

In addition to a 29-strong widowers team, Koen also has a team of 43 hens. Over the years Koen has developed his own "jealousy system" where 2 hens are coupled to 1 cock. At the end of November, the first group of hens was paired with the cocks and once their youngsters were weaned, the 2nd group of hens entered the loft. This second group was only allowed to brood 4 days. For your information... "Golden Xiana" was in the group that bred one youngster but Koen says that he sees no difference in performance between both groups.

To motivate the hens, Koen has made special hens boxes. In the front the hens are housed and at the back the box is the same size as the 2 front boxes so both hens can see the same cock. On the day of basketing, the hens may only see their cock and when they return home, the first arriving hen can hugg the cock and the other hen has to watch their love game from behind bars. Koen hopes in this way to stimulate the ladies.

However, also here variation can bring motivation and for basketing Orleans, Koen decided to only place the nesting dish in the rear part of the living box and leave both hens in the box at the same time. Koen had no eyes enough to avoid fights and within about 15 minutes all hens were already in the baskets. Did this give "Golden Xiana" a special motivation? Who will say? 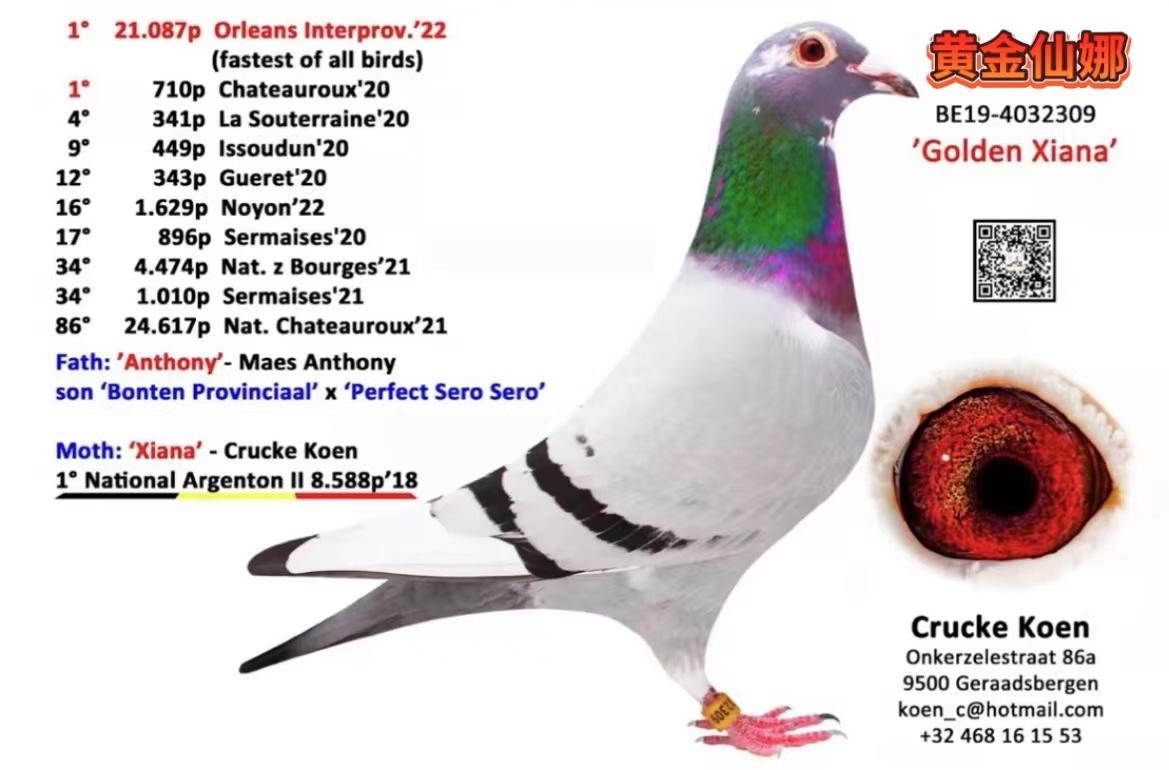 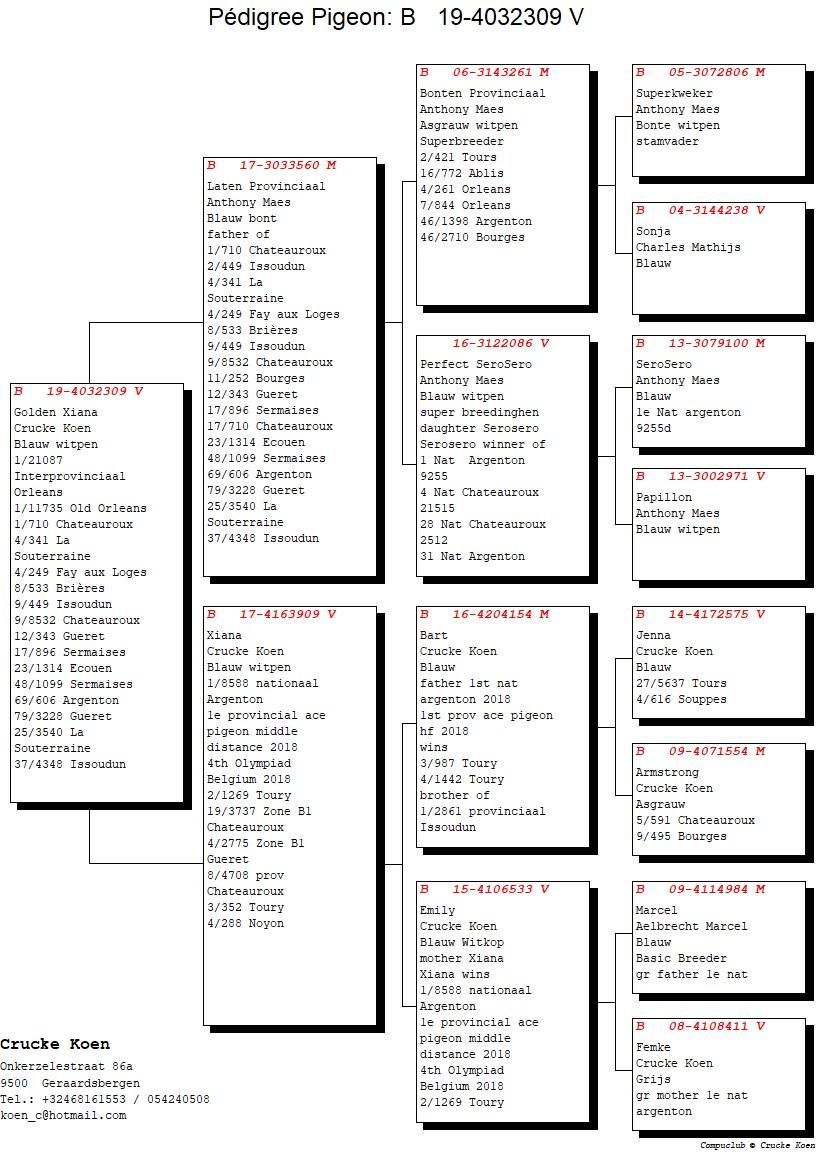 Both cocks and hens have the same care system. In concrete terms this means:
Saturday (homecoming): 100% Beyers Galaxy Sport. On the feed goes Gervit W and K + K 3000 (protein powder) from Röhnfried. In the drinker, it will be a mix of Belgasol and yellow drops.
Sunday and Monday: Feed Beyers Ipac Special (protein-poor mixture) on which Sedochol and vitamineral are mixed.

Tuesday, Wednesday and Thursday (basketing): feed Beyers Galaxy Light and Beyers Galaxy Energy. Once the national races are on the program, he also works with Galaxy Long Distance. On Wednesday and Thursday Koen mixes Lecitine Oil (Brockamp) or Sheep fat (Röhnfried) with Boost (Oropharma) and RO200 (Röhnfried) over the food. This provides as much fat as possible to get the energy tank as full as possible.

From a medical point of view, our East Fleming goes for a consultation with Wim Boddaert (Oostkamp) every 2 months. His advice is followed. Next to the obligatory Paramyxo vaccination, the racers were treated with Trimazine in spring and afterwards they were vaccinated against parathyfus. About 3 weeks ago, there was also a 3-day cure against ornithosis. Against tricho, only the yellow drops are provided and a check with the vet proves that this is sufficient. Twice a week, the pigeons are drenched with blue drops of Belgavet.

the boxes for the racing hens

With Koen, organizer FVOV has a beautiful winner of their interprovincial race from Orleans and you can say that we said it ... we have not yet seen the last stunt of this colony. We grant it to Koen from the bottom of our hearts. 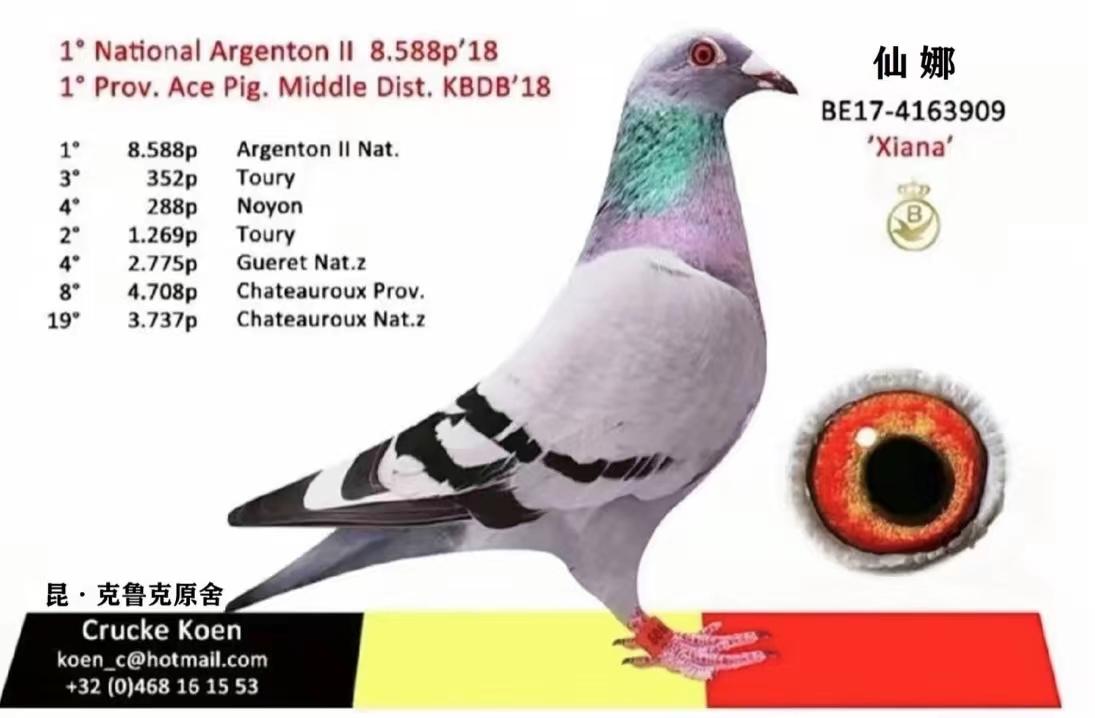