Huub Hermans, Born, and the successes from De Blue Magic and his offspring

Huub Hermans has been living almost his entire live in Born. Married to his lovely wife Diana and a daughter Saskia. His daughter finished studying as a graduate Biology. Huub himself still works 3 days a week in the ITC business at a local government in Limburg. And wife Diana is a nurse in several nursing homes and helps taking care of the entire colony pigeons.

‘Via neighbour Pierre de Bruijn I got at a very young age in contact with pigeon sport.’, tells Huub, ‘As a kid of about 5, 6 years I had a couple of fancy pigeons, chickens and canaries. Seen the fancy pigeons flew around, what my neighbour didn’t like that much, I got from him my first real racing pigeons. In 1977 my neighbour past away and I could take over some pigeons and pigeon stuff and this is when it all started for me in my pigeon career.’

The first year as a youthful pigeon fancier I didn’t win that much, but this changed in 1982/1983 when I got to know the big champion Thei Bours from Elsloo. We got really close which resulted in a weekly visit on Saturday mornings at his place in Elsloo. Also several breeders, youngsters and eggs came totally free of charge from Elsloo to Born. Thei Bours won in his career 24 provincial victories and became winner to more than one care race and also the national winner from the Olympiad race out of Montargis in 1994.
I also had a lot of success to the 2 pigeons that I got as a youth member from Lei Zinken from Overhoven/Sittard. Both pigeons won as youngster a 1st price in the union and turned out to be amazing breeders as well and they fit really well to the Van Loon pigeons from Thei Bours.

In the nineties some pigeons from Jo van Deurzen from Roermond out of his famous breeding couple also came to my loft. Out of this breeding couple 2 children won the 1st and 4th National Ace bird Middle Distance (named ‘Natascha’ and ‘Ricardo’ which was later sold to Mike Ganus out of the US and became over there one of his base breeders) in Holland, raced at Jo van Deurzen. Later some more pigeons were bought at Dirk van Dyck in Belgium and at Pieter Veenstra.

At the moment my strain of pigeons exist for 80% out of the Van Loon pigeons (via Thei Bours), accomplished with the above mentioned strains, Dirk van Dyck, Jo van Deurzen (Natascha-strain) and Pieter Veenstra.

In Winter there are about 28 breeding couples and about 32 racing cocks and about 40 racing hens. The racing team is being raced on the widowhood system so their partner always stay home, this is why I have during Winter time more pigeons on my loft (230 pigeons).
For own use I breed about 80 early youngsters and 40 late youngsters for the Autumn races. Next to these I breed some rounds for 2 pigeons shows, one is the show in Kassel in Germany and the other is Sosnowic in Poland. I’ve been attending both shows for over 10 years now. The most beautiful thing about is that others succeed with my pigeons and I must say that the references of the past 10 years are really amazing and already gave national ace birds, national and provincial winner, Olympiad birds and winners on the OLR’s over the entire world. 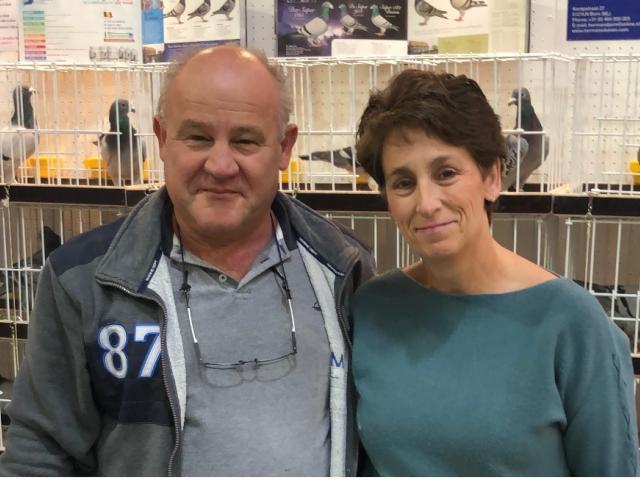 The pigeons are not only performing at his own loft – Huub Hermans receives a lot of references from all over the world! 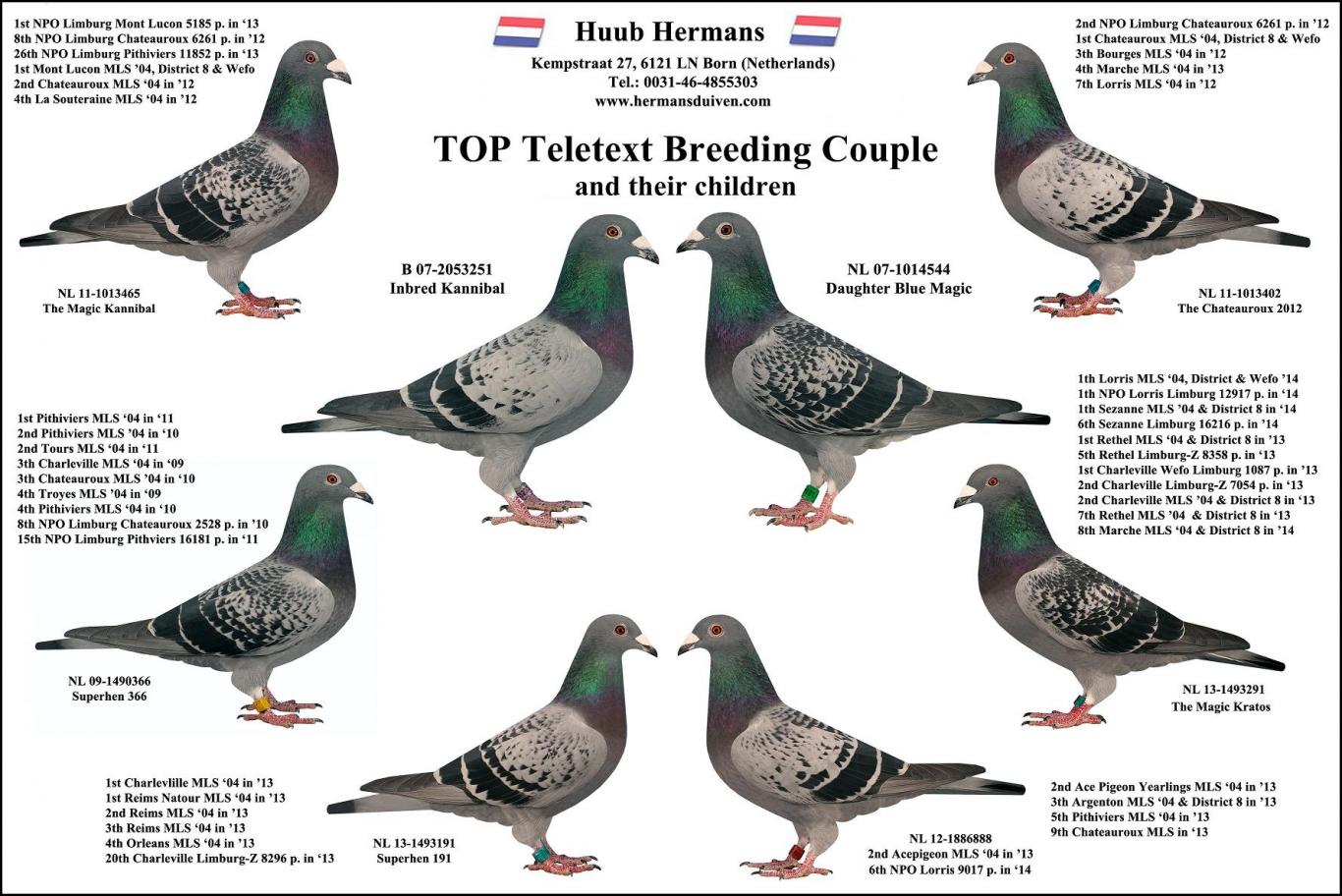 Selection is done especially on the results and pedigree. The youngsters have to set results on the races with 2 nights basket, these become often the best old racing pigeons.

There wasn’t a special selection last year due to the corona, just as every other year: selection on results, pedigree and body. We also do pay attention to the eyes when making a selection. For years the German eye specialist Josef Hofmann came here to check the pigeons on their eyes, later this was taken over by Jos Evers out of Born. He also checks my pigeons on a regular base on the eyes. All of this counts in my selection of pigeons.

Beginning of January I couple my racing pigeons and I let them get used to their new racing lofts of the old pigeons as they come from their youngster loft. After coupling I let them out a few time per week so they can get used to their new racing loft. Once they’re used to it I let them train on a daily base as from March, both the cocks as the hens. Before the first race I try to toss them twice on 20 to 40 km. The cocks and hens train at the beginning once a day (in the afternoon/evening) for about an hour. From the moment they have 2 nights basket the cocks will train twice a day (once in the morning, once in the evening) and the hens once a day in the evening for a full hour. The youngsters are being tossed 5 to 10 times before the first race is up, starting at 5km to go to max. 35km. The last 2 times they are being released in small groups two by two. Between the races the youngsters are also being tossed once in the middle of the week, preferably one by one.

In a matter of pigeon food, I give food and minerals from the firm De Patagoon from Herwijnen. Medicines come from my friend and vet Peter Boskamp from Beek.

In Spring a lot of herbal drink Peter Boskamp, both Bony SGR, Bony Sambucca or Bony Usneano Plus. Next to this a 5-day yellow cure and also the entire year through the water is being soured, especially with the breeders and the partners of the racers.
All pigeons are being vaccinated beginning of November against paratyphoid with Soozal-T. They are also begin vaccinated on a yearly base against Paramyxo/herpes. The racing hens are being vaccinated as well before the start of the season against small pocks.

Youngsters are being vaccinated a few days before weening against Paramyxo/Herpes which is being repeated by the vet after 3 weeks. After about 8 weeks a vaccination against Rota/Paramyxo follows and a few weeks before the 1st races also a vaccination against small pocks.
During the racing season I visit every 3 to 4 weeks my vet Peter Boskamp. During Winter time I don’t cure and if nothings wrong I won’t pay a visit to the vet. The first time I go to Peter is about 8 weeks before the start of the racing season.

This year I won’t race the overnight races anymore, only the program races from 100 to 800 km. The expectations for the coming season are rather positive, hoping that despite all corona issues we can have a nice racing season with a lot of beautiful results and especially few losses.

A few top pigeons that run as a red wire through the pigeon strain are:

De Blue Magic: raced as youngster 5x 1st prize and 2x 2nd prize in the strong union, whereof a 4th NPO Orleans and a 7th NPO Sezanne. He was placed immediately as a youngster after this on the breeding loft and turned out to be a world breeder as well. He is father and grandfather to several Top 10 NPO pigeons, National winners and Olympiad birds and is known over the entire world. 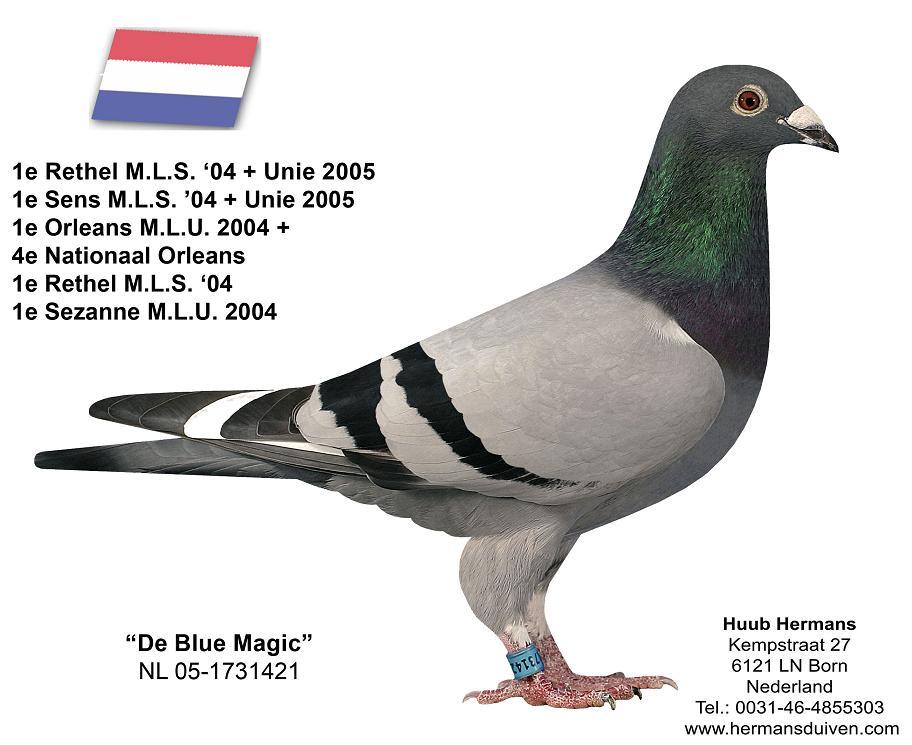 Teletekst breeding couple: a super breeding couple, belong probably to the best 5 breeding couples of the past 10 years in Holland. The cock coming from Koen van Roij comes out of a son and daughter to the ‘Kannibaal’ from Dirk van Dyck, so pure inbred ‘Kannibaal’. The hen is a direct daughter to wonder pigeon ‘de Blue Magic’ coupled to a full sister ‘Natasch’ (1st National Ace bird Middle Distance at Jo van Deurzen, Roermond) 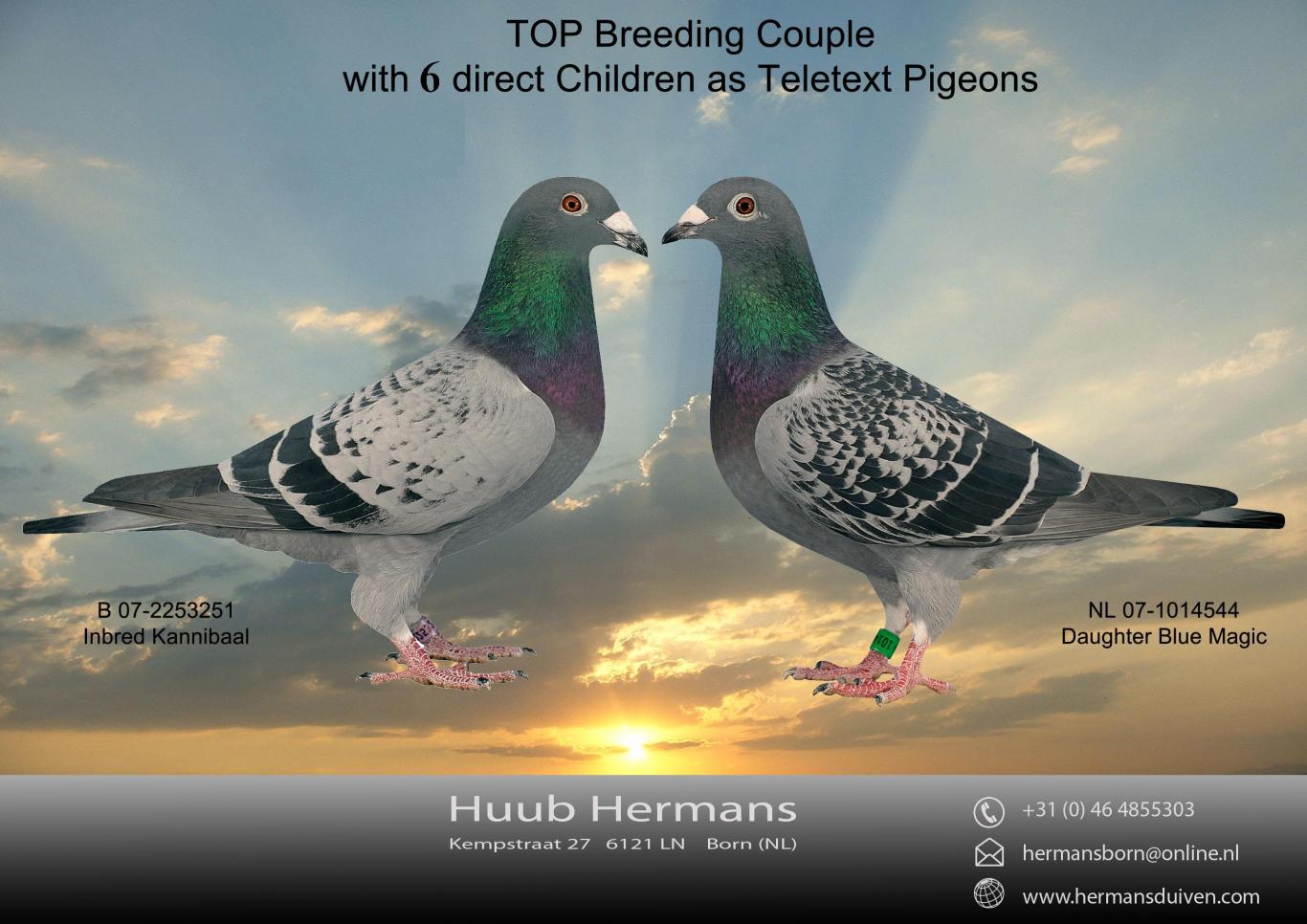 De Super 015: this was also a super youngster with 2x 1st prize within the big union and was also placed immediately after the racing season on the breeding loft. He became father and grandfather to more than 80 1st prizes in the bigger union (so not even counted in on club level) 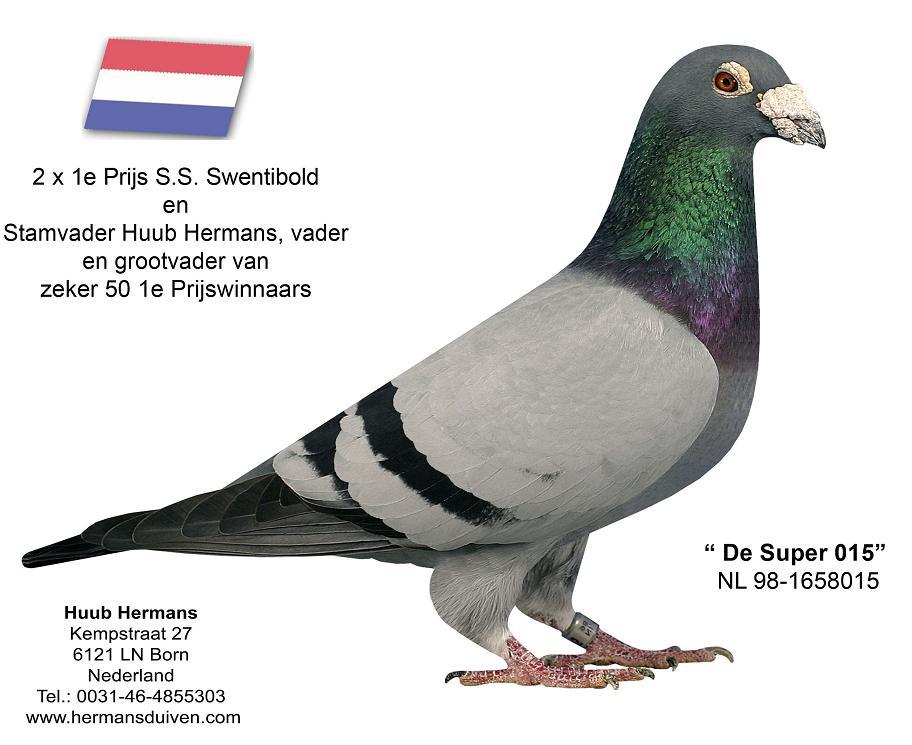 Best 4 racing pigeons of the past years : 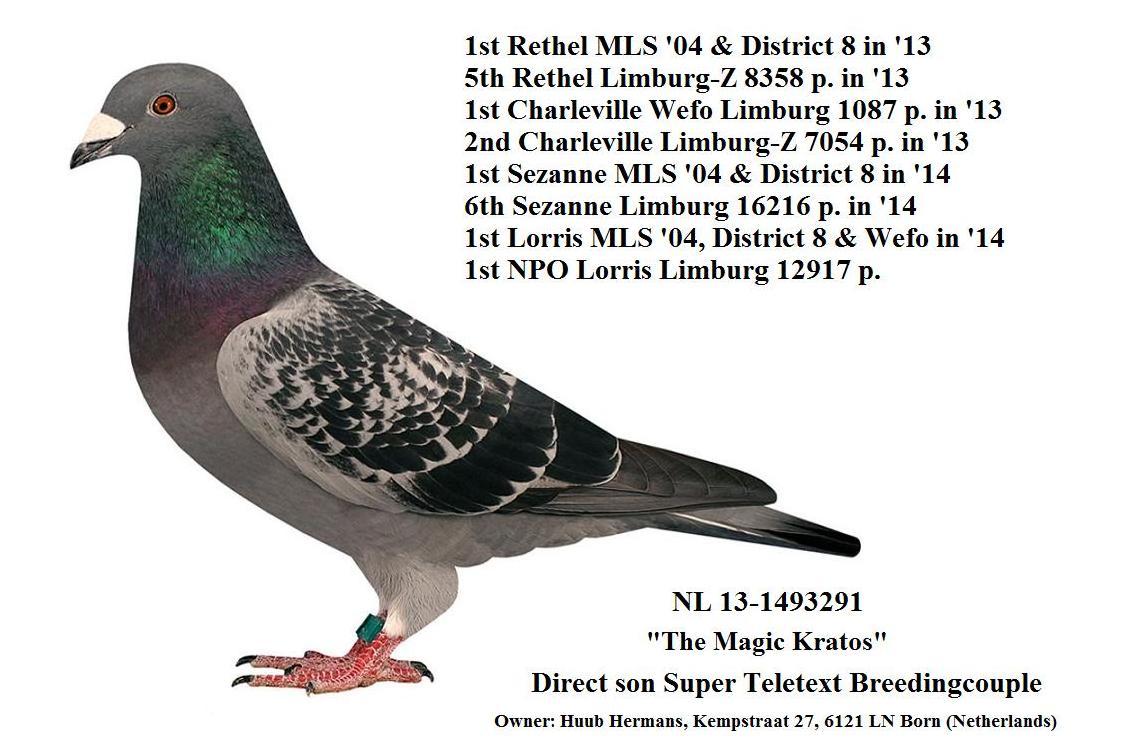 Magic Surprise: comes out of a son ‘Magic Kannibaal’ coupled to a daughter ‘Blue Magic’ and wins 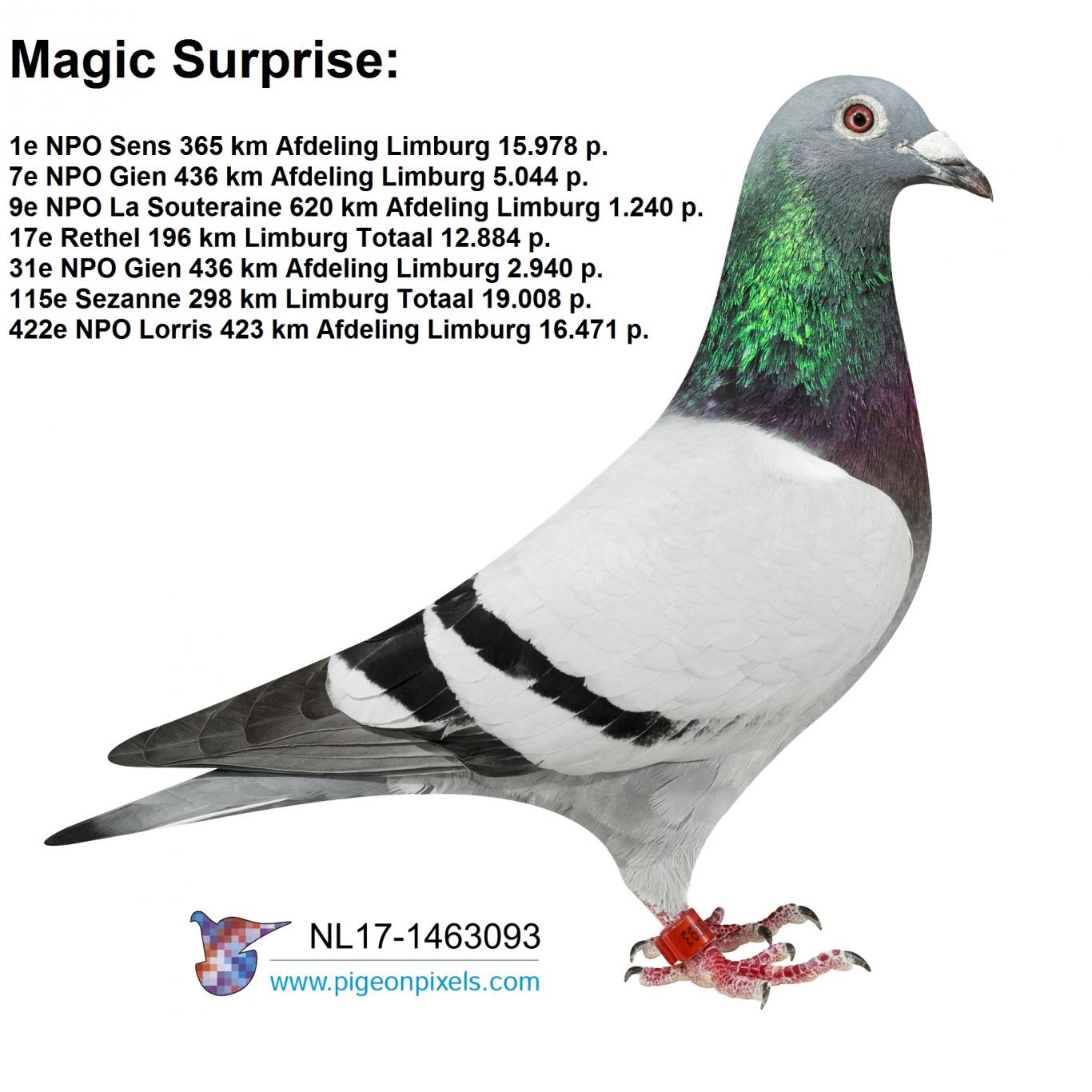 Miss Magic Bergerac: comes out of a son ‘Blue Magic’ coupled to the nest sister ‘Magic Kannibaal’ and wins: 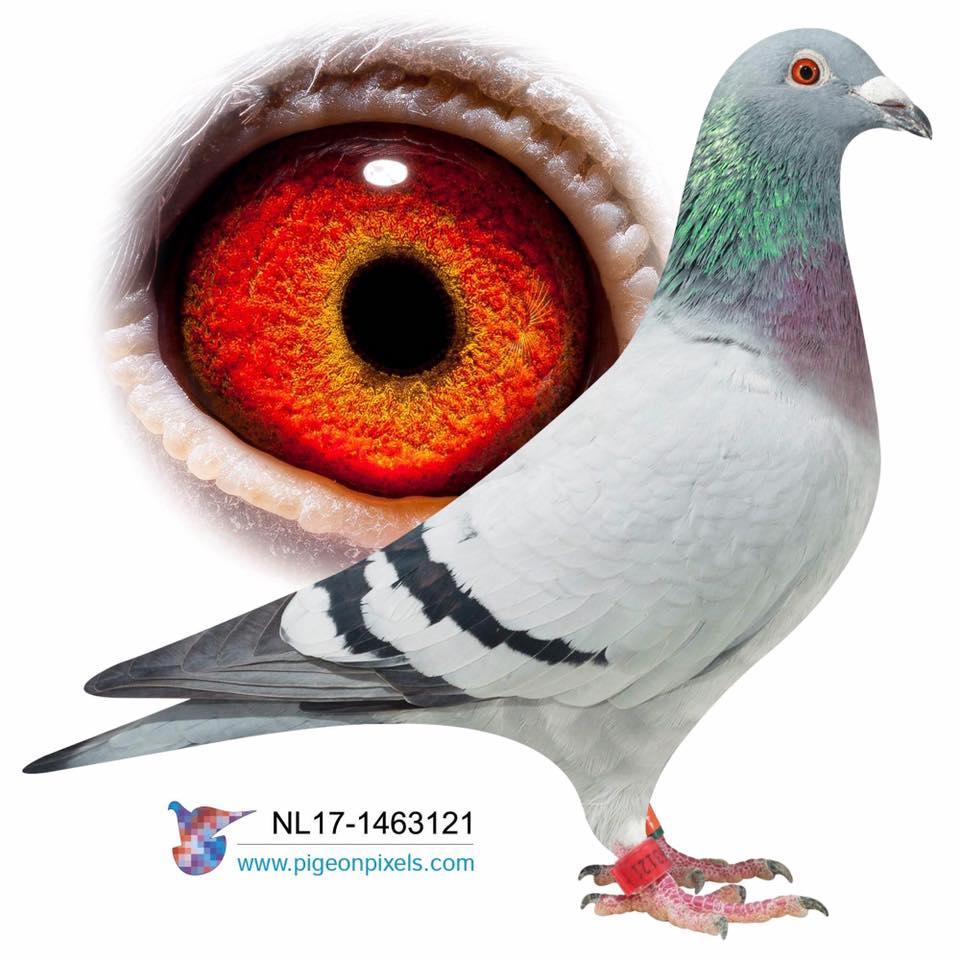 As you can see, more than possibilities enough to score top quality out of Born.

Huub, again a big congratulation on all the results and top pigeons you have from the Herbots team. 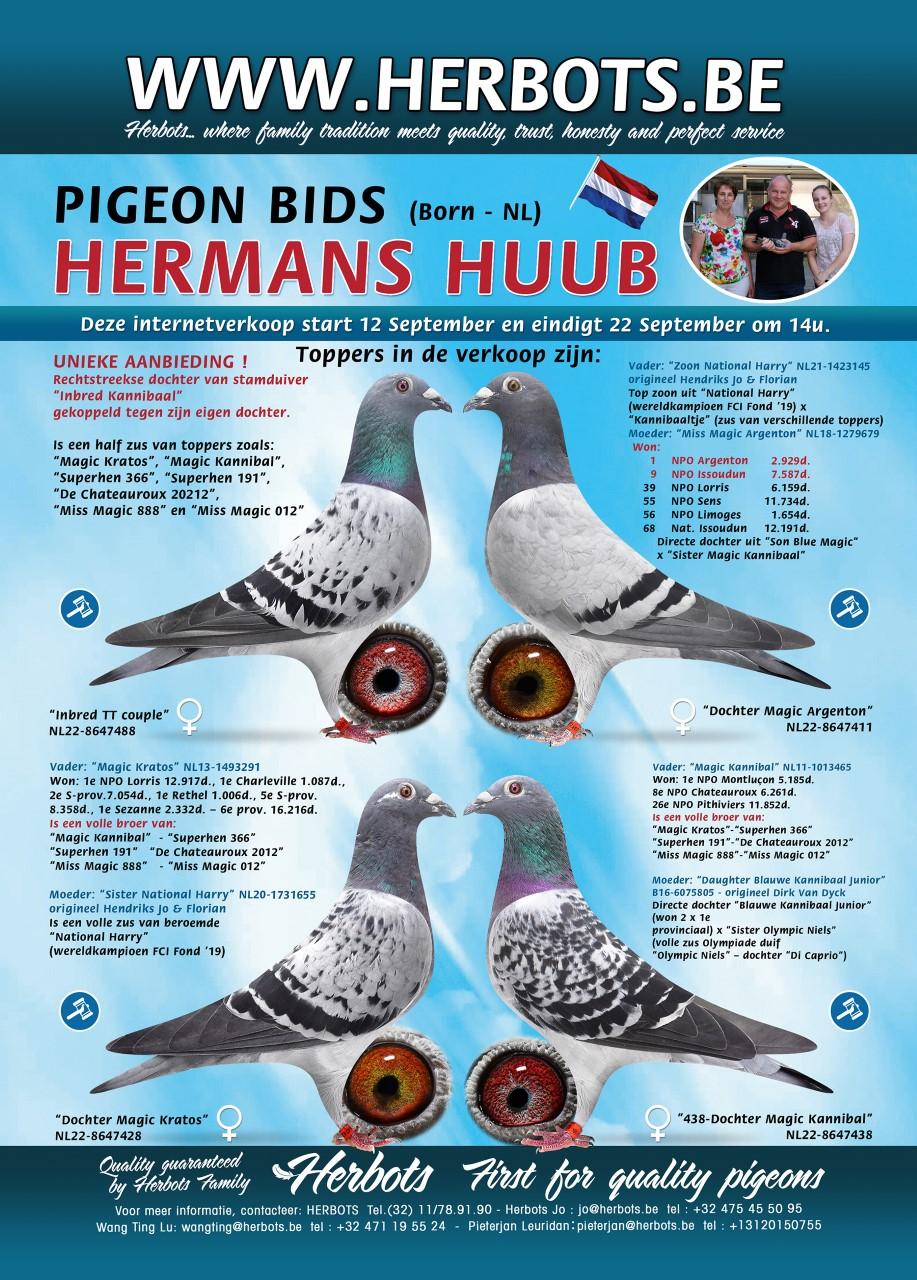