Maurice Voets as base

In pigeon world the village Kessel is being connected inevitable with the names Karel Schellens and Maurice Voets. Two big champions who donated more than their bit to make pigeon sport famous worldwide. Also our National La Souterraine winner has a lot to thanks to the Voets pigeons. Willy explains: “when Maurice got ill I went to take of the pigeons and as thanks I could put a few youngsters in my basket. There were offspring from his famous ‘Lichte Bourges’ to be found amongst them. It was a hit right away…the Voets pigeons made that the results curve of my colony went up quickly.

In the meantime the name Daniëls isn’t an unknown name anymore within our international pigeon sport. Several national victories, an Olympiad pigeon and the 1st national ace bird GMD KBDB 2016 + 2017 are achievements that many amongst us only can dream off. Which made this last achievement even more extra ordinary is that these are two full sisters of each other. First there was ‘Sara’ which made furore as youngster and afterwards as year bird. Only one year later it was her sisters’ turn ‘Selin’ who didn’t only became the 1st National Ace bird GMD but also won the 1st semi-national Vierzon in 2017. But it aren’t only the ‘Voets’ pigeons who lift this strain to another level, also pigeons from De Meyer & Son from Kessel, Jos Bastiaens and L-B-J Geerinckx from Wommelgem, Van Leest – Peeters from Nijlen, Paul Huls from Zonhoven and Gebr Van Gestel from Bevel. The last one we will name is someone special, via a voucher Willy went to Alfons Hens from Nijlen. This cock is the father of the 2 National Ace birds.

Willy has a very small racing team. Only hens are being raced and for the season of 2020 this meant 3 old and 13 yearling ladies. During daytime the reside in 2 aviaries of 8 pieces who are in front of the lofts (see picture) and in the evening they move to the resting loft where they are being locked up until the next morning. Willy: “By handling this system I have very little problems with lesbian hens. The day is devided in a way that they are being fed in the morning on the sleeping loft, move to the aviary then and in the evening after feeding time they move back to the sleeping loft. The hens train once a day until the end of April and afterwards twice a day. Mostly they train 40 minutes to one hour and when they don’t train good enough the flag is being placed and get an obligatory training.

The hens were trained in about 4 steps to maximum 10km. These short trainings finds Willy very good to build up trust. Afterwards they go once to Brussels with the club and then the real work can start off. In between the races he never tosses the hens anymore.

From the moment they race middle distance they see their partner before basketing, this is always very short from 5 to maximum 15 minutes. At arrival they get the change first to recover a bit and drink something, after this they go to their cock. On the first races of the season they stay together for about one hour after the race, with easy national races this is for a few hours and with hard races this is until the evening.

And care just as with so many others…you won’t find any secrets at Willy’s place !

Willy… again a big congratulation from the entire Herbots team and up to the next victory ! 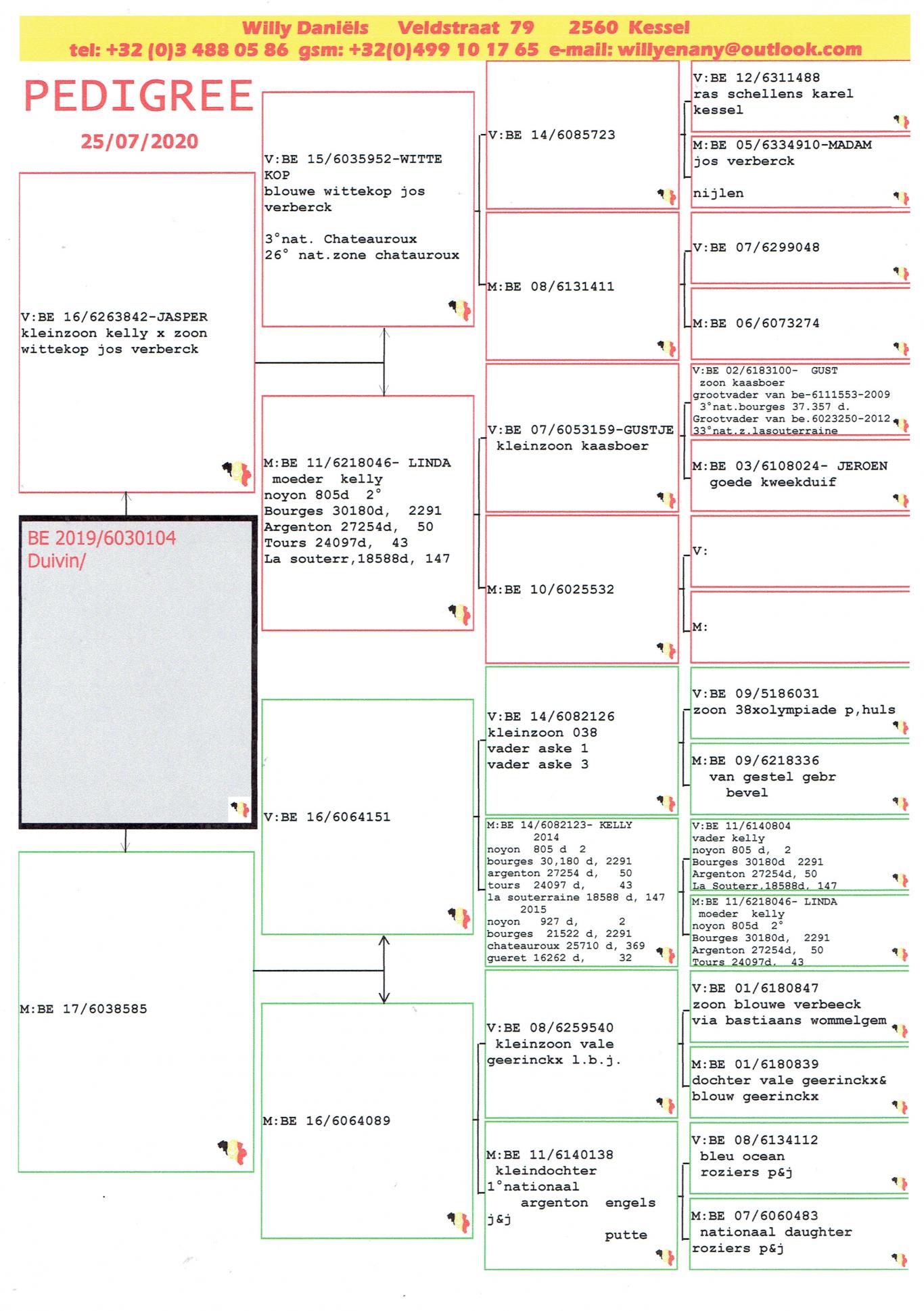