The last long distance race out of Tulle had 3000 old birds and 4000 yearling birds at the start, the special Corona year was closed off with a top colony as winner. Bart & Nance Van Oeckel from the Antwerp village Oud-Turnhout could wait for the pigeons for the umpteenth time in the rain. But this didn’t stop top hen “BE 18-6058181” to celebrate against 3,064 old birds. And once again it is a granddaughter from their base breeder ‘F16’ that gave their 5th National victory out of their career and the 21st Provincial victory. In total they win 3x Top 10 National and honour once again their colony. The winning drive was still present during my visit and my advice is to keep an eye on them the coming weeks as their hunger hasn’t stilled yet.

For Bart & Nance the season 2020 started where it ended in 2019, getting the pigeons in an optimal condition trough the moulting and Winter is one of those things. In September 2019 the pigeons were selected out and the better old and yearling pigeons could stay accomplished with the youngsters from the 1st and 2nd round (they select these with the best that remain after the season). After this the right site of the racing loft is being accomplished with young birds from the 3rd and 4th round who all can stay and get their change as year bird.

Why does he do this? The 1st and 2nd round raced 3 national races and the wheat from the chaff is already separated by this, the youngest ones could only race one national race and this isn’t enough to make your judgement on.

The entire racing team has been darkened until they got the news that they could start with the training flights, from then on they stopped darkening and from the 15th of July they started to enlighten from 05h00 in the morning until 23h00 in the evening. They still choose to race the bigger part of the racing team on the chaos system and total widowhood, this year they had for the first time a small loft of 12 pigeons for the shorter middle distance who showed very nice results.

The national winner is one of this loft, Bart decided to stop the 4 best of this loft and put the others on Tulle. They raced as maximum distance Sermaises, but this big leap in distance didn’t make any difference.

The left part of the racing loft was being coupled a few weeks ago and were on end breeding position before Tulle, the cocks raced Tulle while the hens did Melun and can finish the coming national races on nest position.

What kind of important decisions did you make this season ?

First of all with the heath we had to deal with, no pigeon is being basketed over here when the temperature rises above the 30°C. I don’t do this as you will get this right back in your face, this can disrupt the entire racing team.

The second important rule is that we foresee a quarantine loft for the late comers from the day after or even 2 days after. This pigeons had to go deep into their energy reserves which makes that they can’t pick up the rhythm from the other pigeons right away. That’s why I put them aside for one week and are being cleared and get sufficient side products to be able to recover fast. After that week they will be placed with the rest of the racing team again and you can tell that they are able to pick up the same level much faster. Maybe a small detail but I think this is really important and can advise to do the same for all fanciers small or big.

The last rule is one that I apply since several years now, after x weeks I take out the least pigeons from the team. This can be 20 or 25, depending on their conditional level and feeling. I placed this one amongst the team again during Brive and you could tell this boosted the team again. So especially trust and condition is what I work with the entire season, but it isn’t the only way to success but for my own feeling the best.

How does it go in a matter of training.

The pigeons train once a day, due to the heath we aren’t able to let all the pigeons train before the heath so we decided not to train the pigeons at home anymore. They are in a kind of schwung anyway so they are in top condition by tossing them 3 days in a row at 60km. We don’t do this in big groups but in groups from 12 to maximum 18 pigeons. They are being released with an interval of 1 minute and when one loft has been released I wait 5 minutes before I start to release the second loft. This makes a lot of difference for us in a matter of time and the pigeons get to train all for one hour and get even more condition by doing this.

What do you do as motivation ?

This is a difficult question, as I decide that on the day of basketing or at the day of arrival. Was it a hard race or an easy one. These are all factors that I keep into account and where variation in our system is more important than fixed timings. Otherwise the pigeons get tired of it and then you can’t race them week after week until the end of the season. This is how they can’t come together after a hard race but is everything focussed on their recuperation. Also when we train our pigeons on 60km they don’t come together either. This wasn’t the case on Tulle either as we thought that the pigeons were in top condition at the start of this race.

As last the feeding and guidance.

We use the Herbovet gamma as side products together with minerals from Dr.Mariën. At arrival they get Herbots Recovery and Herbosol, during the week it is especially Herbial, Herbochol, MMK on the day of basketing and “Yellow Drops” who will be added to the food once a week.

Medical guidance is under the supervision of Raf Herbots from Velm. This year our racing team got a vaccination against paramyxo, rota and paratyphoid. In Spring there was a 10 day cure with Docamox on the agenda and were treated against trichomoniases.

Bart & Nance, a big congratulation on this National victory from the entire HERBOTS TEAM. 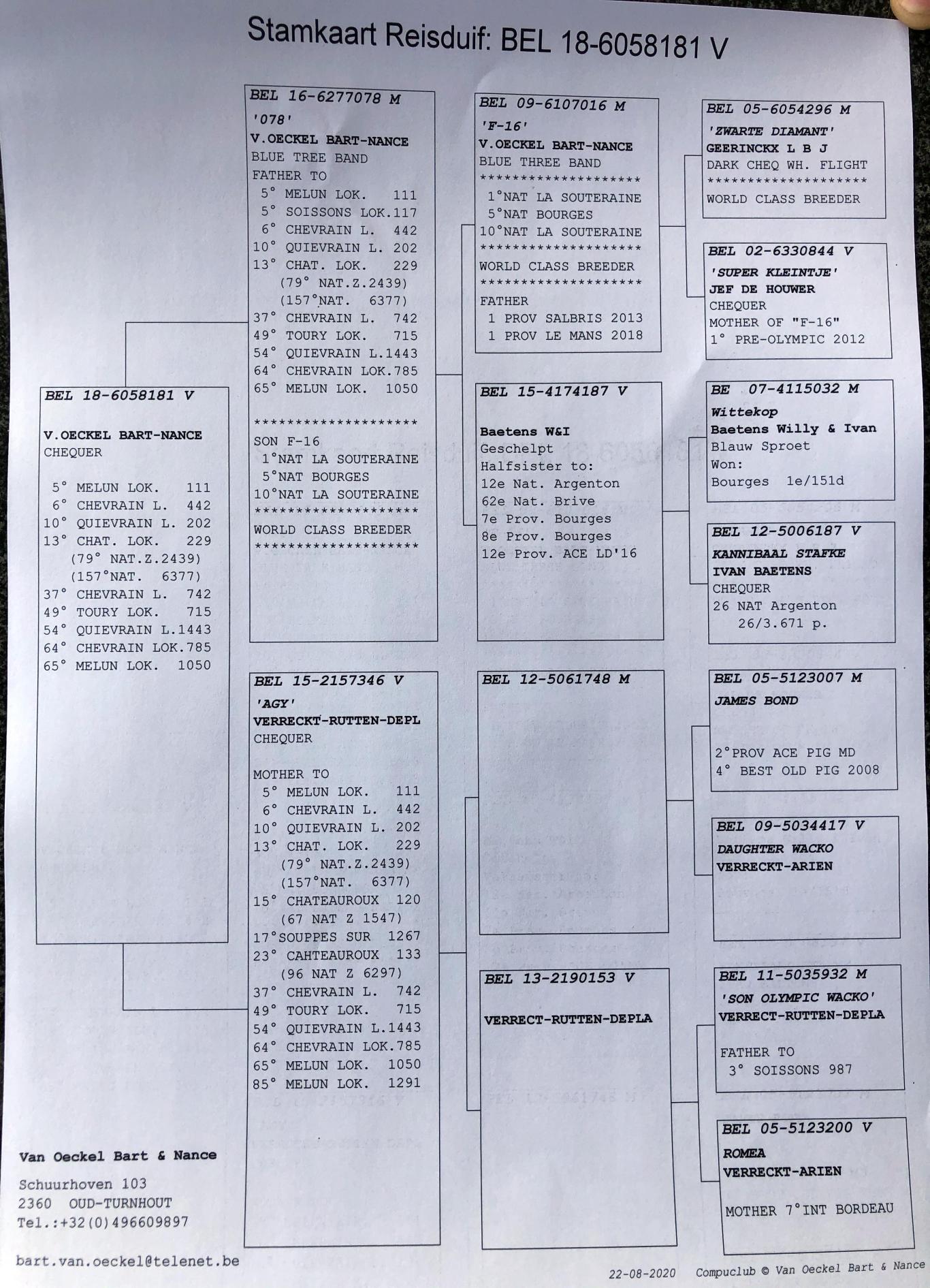