There are, like in groups, organizations, layers of the population, people that distinguish themselves of the grey part. Not that they don’t want to be grey, but it is in their nature that they just aren’t.

This is also how it goes within pigeon sport. When you drop the name Ad Schaerlaeckens within pigeon midst and you immediately have a fish on your hook. Either they know Ad from his fascinating, sharp, black-white columns or blogs in several different pigeon publications, or they know him from his pigeon results….or from the many that succeeded with pigeons from his loft, references.

Ad is also a fervent advocate of the short distance and middle distance game within our pigeon sport. Not only because this game is near to his heart, but also because he compares these with the disciplines in athletics like the 400-800-1500 meters. And who doesn’t look at these kind of events with a lot of tension. It also turns out when you have a look at the ‘history of pigeon sport’ that a lot of the short distance pigeons are being used for further races (read greater middle distance and long distance).

Ad, who is a real border case Holland-Belgium (Baarle-Nassau) when speaking about the place he lives, is also an appreciated ear for pigeon fanciers. When you are a starter, you can go to him for good advice or a hint to fanciers where you can get good pigeons. Are you a practised fancier than you can always go and check your vision with Ad’s vision, who will give his brutally honest opinion and advice to you with his analytic and critical view on things. His helicopter flies high above pigeon sport which gives him a good view of the sport globally. Also many foreigners who are looking for Belgian and Dutch pigeons often come knocking on Ad’s door for advice.

Especially for starters or fanciers who doubt once in a while is Ad’s blog highly recommended. I would say that this blog, the publications of Willem De Bruijn and some other icons should be obliged literature. You will get smarter reading this, get free advice and learn how to analyse pigeon sport in a very objective-critical way.

Ad is also a fervent fan of the good and correct reading of game results. How many pigeons basketed, how many prizes, how many pigeons at the top of the list, how strong or weak raced against own region, province, national, did a pigeon get out of the pack to score top 10 against all-weather circumstances and so on…very usefull information for those looking for ‘the pigeon’, the strongest result, the correct interpretation of the results.

Words, deeds, references. The expression of politician Mieke Vogels “much blabla, little boomboom’ isn’t an expression that fits Ad. The things he puts on paper or on screen now is something he used to and still proofs. Mister Orléans was once the title that was appointed to him and with reason. He used to roll up the result on the national Orléans races. I a far past he built up the base of his colony with pigeons of top racers then (and they weren’t always national good sounding names…) like Hofkens, Verheyen &Zoon, Van Breda, Van Gestel, a bit later Janssens Gebroeders, Voets, and later Vandenabeele, Karel Boeckx, Gust Janssen and off course the more than successful co-breeding with the ‘Ad’ from Wouters (see ‘de Ad’, 1st national ace bird KBDB).

Ad has a nose to see the quality of a pigeon, to feel it, to smell, call it whatever you want, but there does a champion distinguishes himself of the average. Everything stands or falls with that conscious quality as he is allergic for many other things or miracle cures. The food is being kept simple and divided in 2 kind of food, in a medical way the basics are being followed and a lot of supplements don’t find their way to the loft.

Also because of a few physical inconveniences it has become a little bit less evident to take care of the pigeons as he wants. Without the help of some good souls it wouldn’t be possible anymore. To be able to race this strong in these kind of circumstances and supply others you can only have very good pigeons or you have the art to realize the correct crossings.  Ad is a fervent fan of crossing in pigeons…it isn’t a secret anymore that crossing in the best racing pigeons give quality.

In short, it gives a large form of relaxation when you don’t have to proof anything anymore, but there’s the difference between the big champions and the less gods, champions are hard to satisfy. The eager for top quality and strong results is that big that average isn’t good enough…and this is also the case with Ad.

As he felt that he doesn’t always have the strength and mordant anymore to keep a sharp eye on the pigeons on a daily base, a nice combination with the Brothers Victor and Willy Maegh and brother in law Roger de Vrij was born. In Rijkevorsel the youngsters out of the best pigeons from Ad were placed and were guided with all the necessary advice by Ad…and this with amazing results.

The combination Maegh AS has been racing like hell the past seasons in the ZAV, which isn’t an union where average Joe race but where the elite of the middle distance and greater middle distance compete against each other.
When we visited the combination Reijnen-Bolton-de Hoogh in the weekend of July 16th on the occasion of their national victory from Issoudun against 18,176 yearlings, Erik Reijnen already told us that it is impossible to play against Ad Schaerlaeckens. "Unbelievable how strong these pigeons perform" he said with the necessary appreciation in his voice.  Nobody can judge better than the fanciers who weekly have to cross the swords with the Schaerlaeckens pigeons.
Because of Corona troubles unfortunately started too late because on the introductory learning races from Quievrain the enthusiasts in the area had already seen it. Again not to fly against. Unfortunately those flights were not for price, but that was postponement of execution.

June 13th. Competition by east-southeast wind that made all pigeons drift to the far west and the Comb. sits extremely east. Still 20/29.

The winner, 17-724, a hen, was in 2019 3rd Ace pigeon and had already won a 1st in ZAV. One can see that she also had the second highest speed of all those many thousands of Antwerp Melun birds. That she was only nominated 17th is due to a luxury problem. Too many pigeons that can win. By the way, she is a full sister of the 18-727 who flew, as first nominated, and won the 4th against 718 birds. In Overkoepeling 7th against 1,743 youngsters.

Last week Ad and his companions were the first in the whole province to have 4 pigeons from Sermaises. Now they had 4, 5, 6 and 7 pigeons first while they only race a limited number of pigeons. In Antwerp they wonder who in Belgium is doing better at the middle distance!

They already said about Melun of July 4 that such a result had never been made  all superlatives fell short after the race that followed from Sermaise on July 11th. Most heard cries. "Never shown, "Unbelievable", "Not normal, "Unmatchable.

As acts speak louder then words: 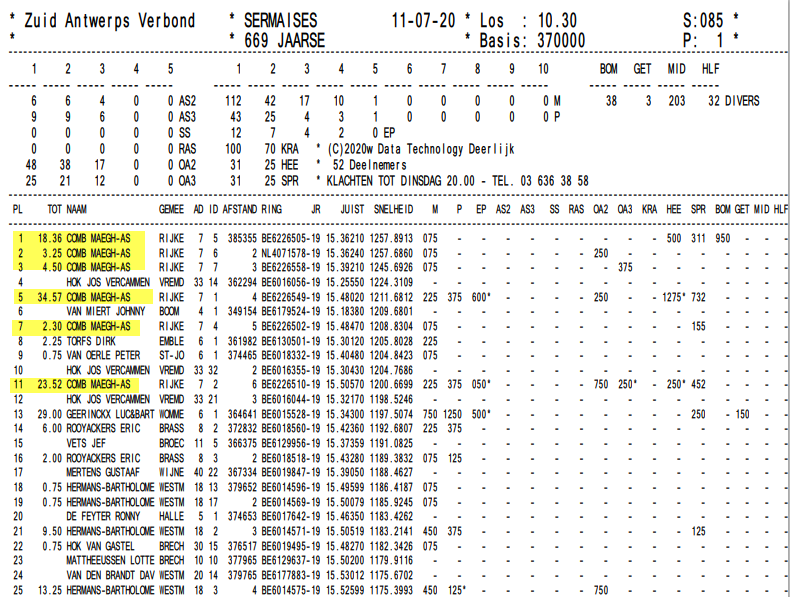 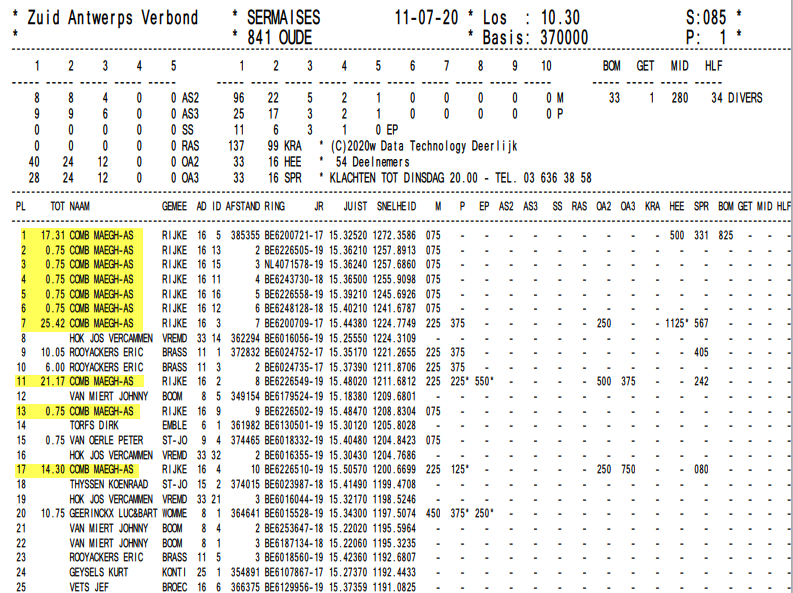 Old in Overkoepeling:
In the combine “Overkoepeling” with the “Grensverbond“ no less than 2,071 pigeons flew: there the champion birds of Schaerlaeckens won: 1, 2, 3, 4, 5, 6, 9, 22, 26 and so on. Here too, the first pigeons flew minutes ahead. The winners with yearlings and old ones are different pigeons! 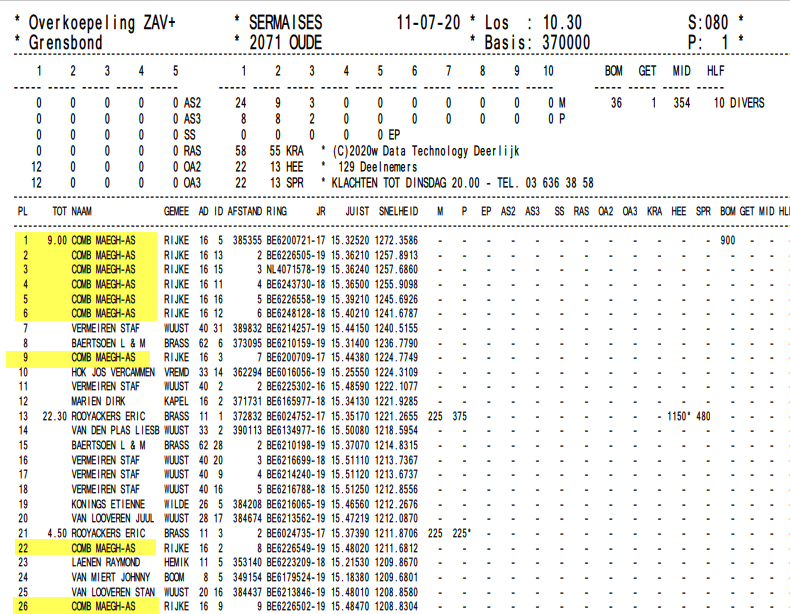 No two without 3, but 3 of this trilogy might be the hardest to realize in a matter of a few years namely giving references of others that succeeded with your pigeons. There is a lot of talk and for many amongst us we can classify this as pub-talk. Getting results…luckily there are still many strong lofts in Belgium and Holland that can still claim this and are legit the best of the best within the international pigeon sport, but when we ask for a reference list many get pale.

Nothing of this is the case for the pigeons from Ad Schaerlaeckens.  The list is long, very long of fanciers from the past and of today that got true winners from Ad’s loft. Also the after breed have become a true success with many. The pigeons come out of crossings and let themselves cross in with other quality and bring in many cases the results to a higher level. But names say more than slogans. We will show you the list and we restrict us to the results out of direct Schaerlaeckens-pigeons :

Words, deeds, references…in fact the ideal cocktail to rest out, but this isn’t how Ad works. Convicted to a life-long business, or better possession by pigeons it is almost his faith to continue in setting results, advising people and to motivate and to supply with the best to be found in pigeon world. There are worse things in live….. 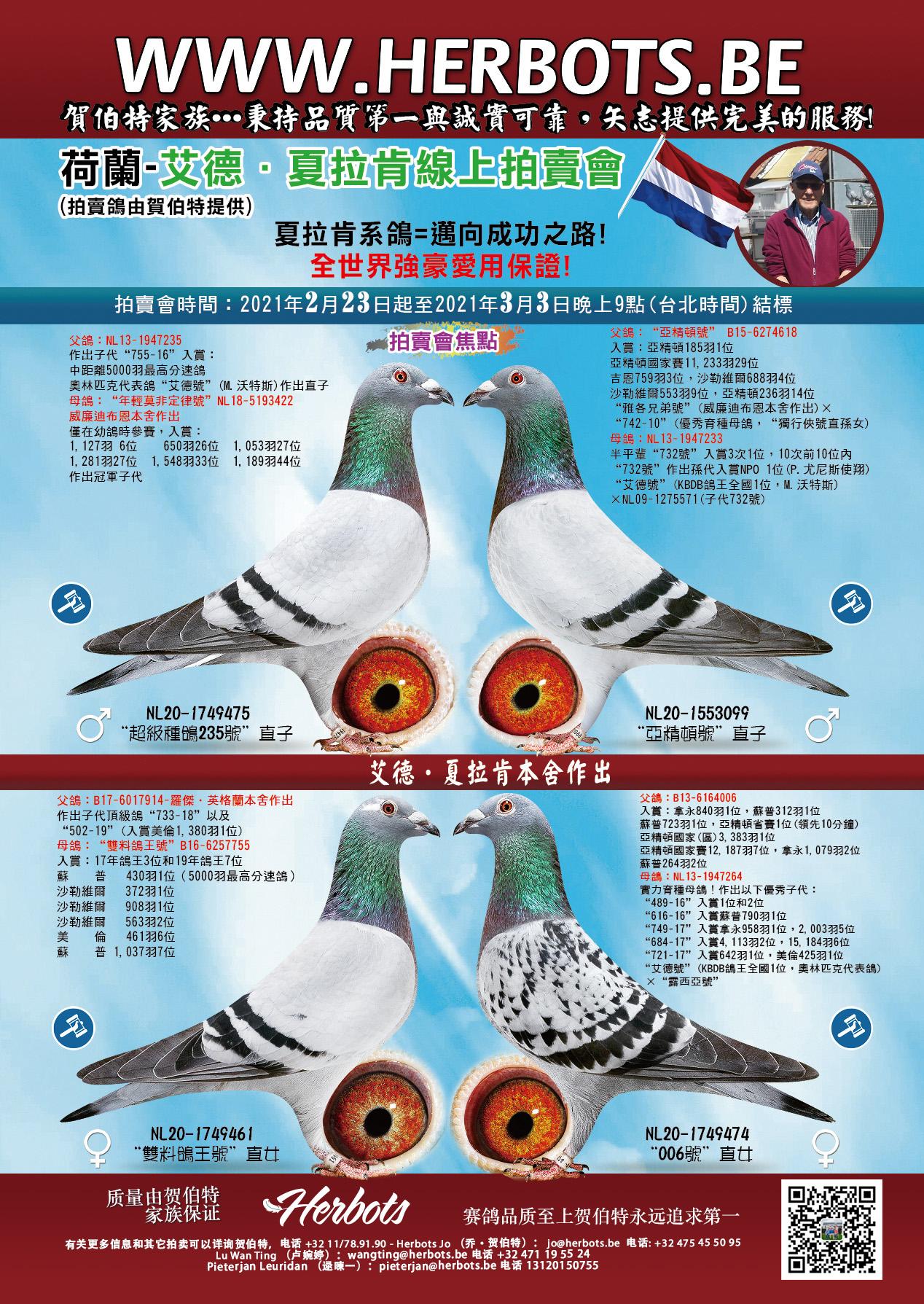