Martin Ravelingien (Tiegem) shined on Narbonne with the old birds

*The beginning:
Martin got the pigeon germ from home. After his fathers' death, Martin got in touch with the tandem Vandendriessche-Benoit from Deerlijk... he got the long distance germ from them. After his studies as doctor and his marriage with Arlette he started of racing pigeons in  Wannegem-Lede. In 1985 they moved to their current house in Tiegem. The results on the international races were set immediately, with in 1989 the national victory on Pau...and after this year after year strong results were set. Since than Martin closes his season in beauty with his favourite race Perpignan, where every time again a nice result is being set...one of the most beautiful once was in 2007...where again an amazing result was set, national against 5,547 pigeons : 2-4-35-104-106-...and 27/35 and 14 pigeons per 10. It was 'U2' that got home first...and together with his head prize on Barcelona he won also the title of the 1st National Ace bird Extreme Long Distance old birds KBDB.

*Strains and loft:
The first pigeons for the extreme long distance were from Vandendriessche-Benoit (strains Catrysse, Pol Bostyn, Marcel Desmet, Noel Peiren)... this together with the strain of Jozef Huysentruyt  and Marcel Demeyere (strain 1st national St.-Vincent).
This strong base was at the beginning successful crossed in with pigeons from André Verhoest Waarmaarde (who had strains from Noel Peiren and André pintelion ) and with pigeons from his friend/colleague/Barcelona specialist  Antoon Lenaert (who had mainly pigeons from André Vanbruane, Emiel Denys, Desmet-Matthys and the family Gyselbrecht).
Later pigeons from ao. Haerinck-Poelmans (via neighbour Norbert Messiaen and Hubert Verbauwhede), Jozef Vandenberghe, Menne und Töchter, Van Pamel De Mulder (sister 1st I.Nat. San Sebastian and 1st nat. Bordeaux), Sylvère Toye...came to the loft and yearly pigeons from Antoon Lenaert  moved to the loft, where he possesses pigeons from all his last good Barcelona pigeons (his '51', his 'Stier', 'Odillon' from Solange Decuyper).
Yearly pigeons from here and there are being acquired as well, Martin looks for fanciers that placed nice results on the extreme long distance  with pigeons from 5 to 8 years, another criteria is for pigeons who set results on the heavy Barcelona.

*Narbonne 2019:
Past summer the pigeons from Martin did well...with a marvellous result on Narbonne, beginning with the 3rd national and with no less than 9 old pigeons within the 76th national, you can state that Martin was one of the absolute best. Narbonne was postponed on Saturday and Sunday due to the rain showers in France. On Monday they were released at 07h15 with an weak South-Western wind and over the entire line nice weather. Martin basketed 50 old pigeons, mainly 2-year olds with few experience as preparation and selection for the coming season. Narbonne became a big success over here....at 19h01'36" the first pigeon was clocked with a speed of 1,208.9201 m/min. and was the first in Courtrai against 164 old pigeons and on a national level the 3rd against 3,873b. About 20 minutes later the second pigeon came in, and after that one after the other arrived...by 21h he clocked 16 pigeons, where off 15 per 10. The beautiful result against 3,873 old birds: 3-19-23-25-26-47-57-69-76-169-190-258-291-364-374-411-... (22/50)
Please see the pictures of the first 5 arriving pigeons together with their pedigrees : 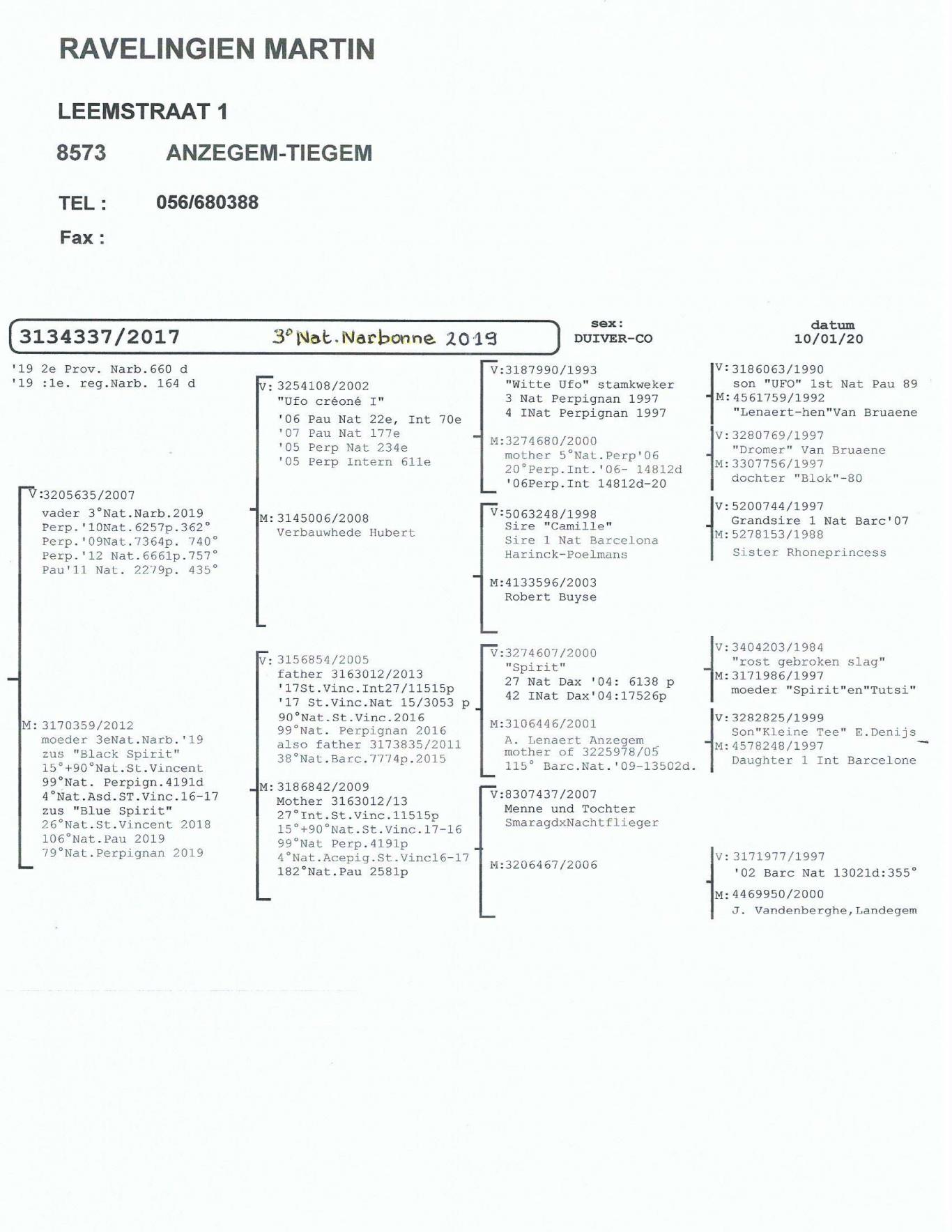 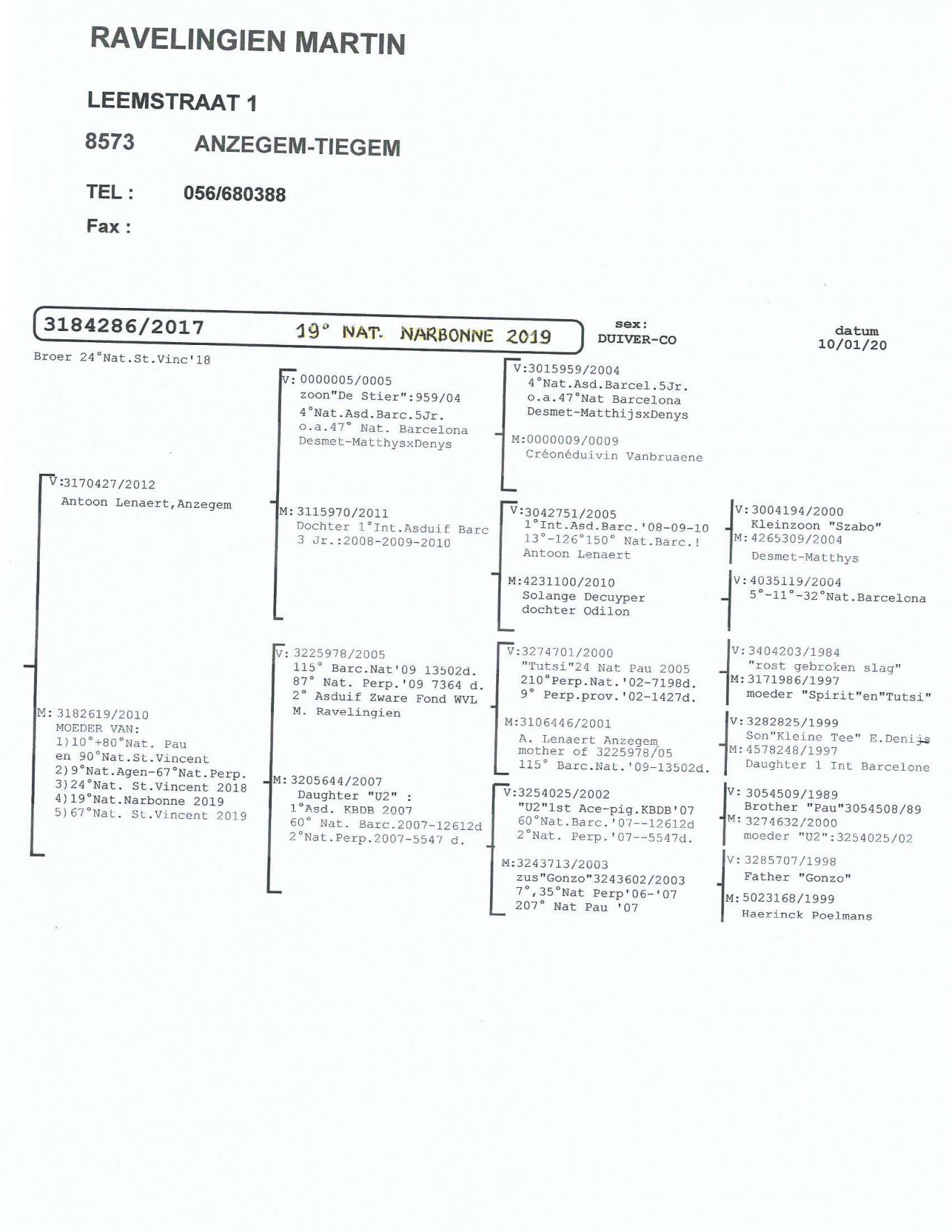 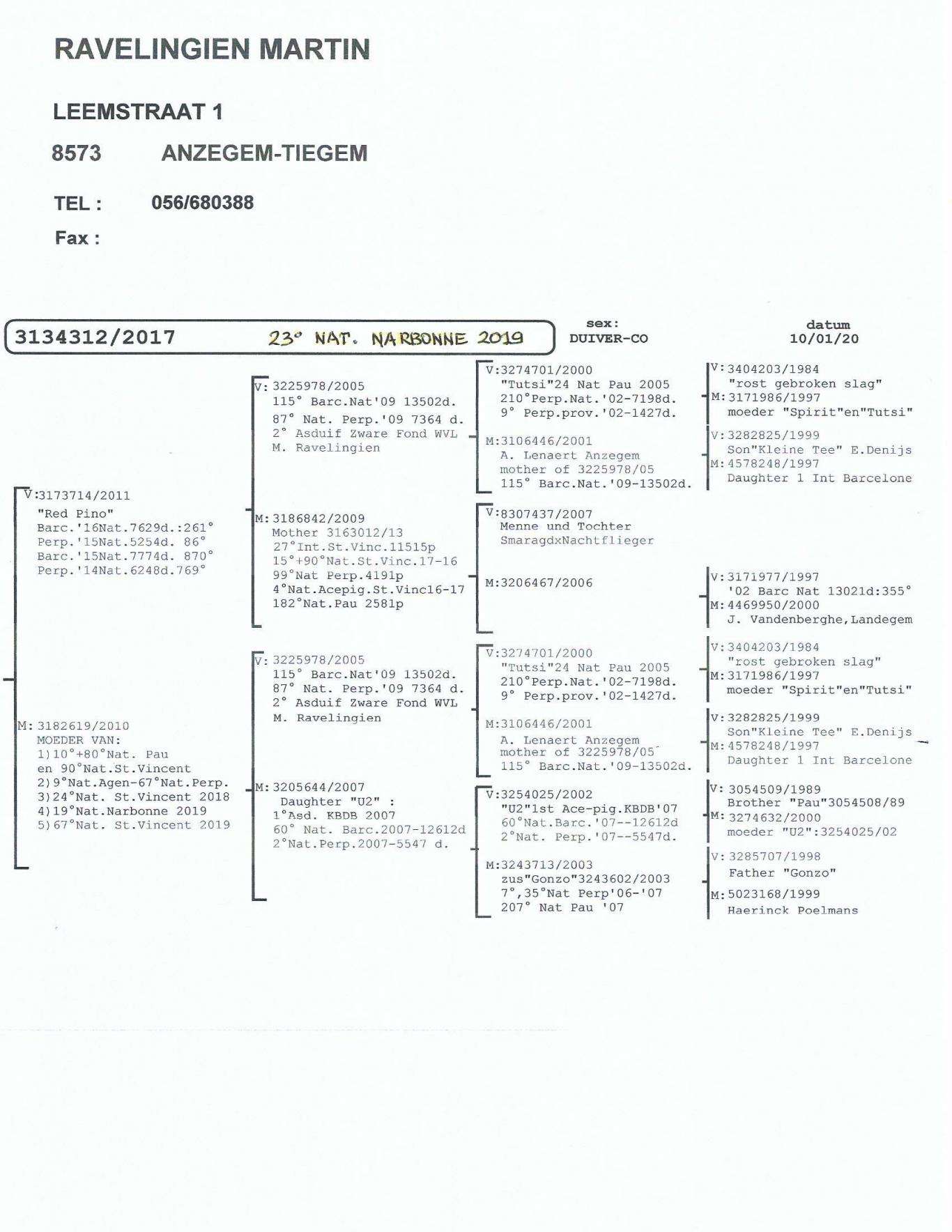 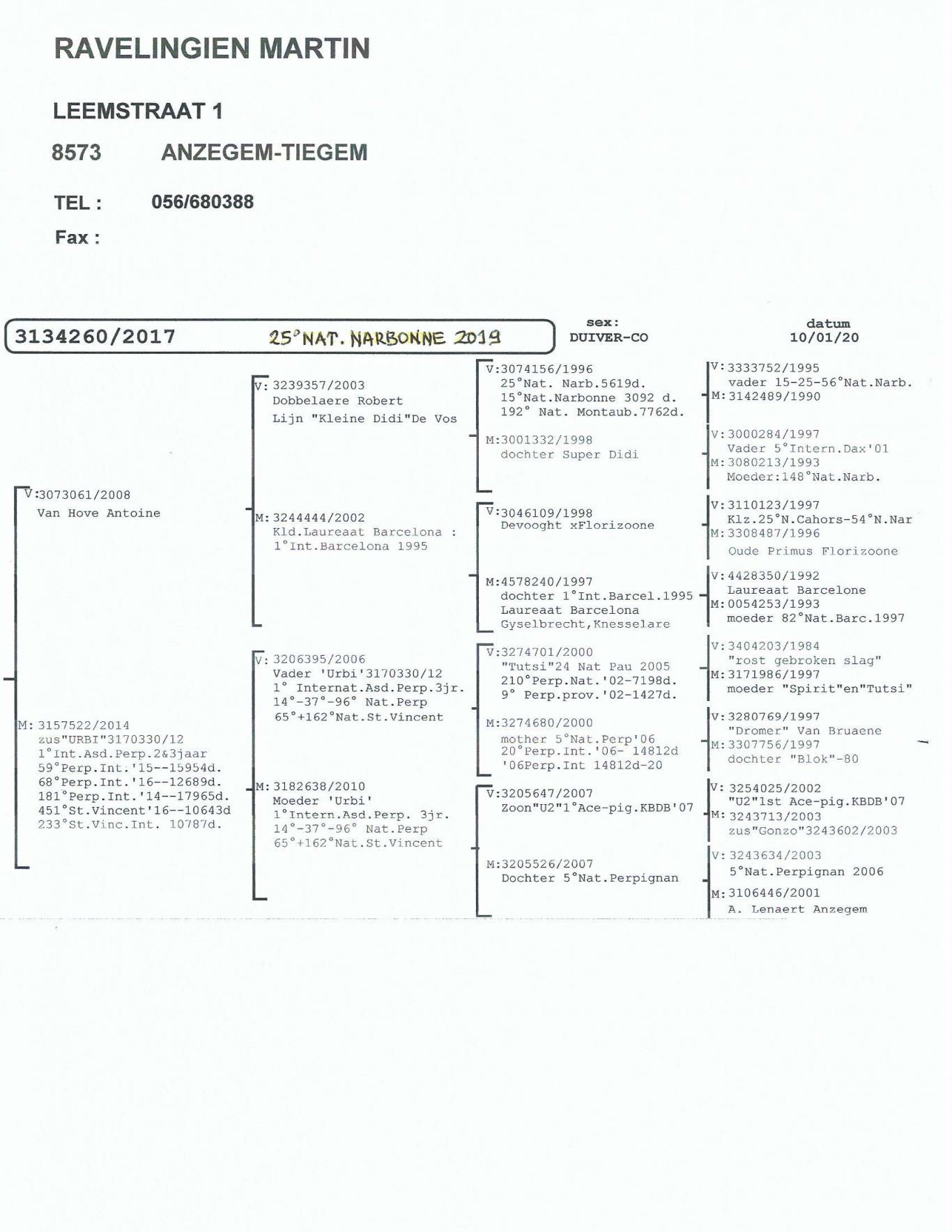 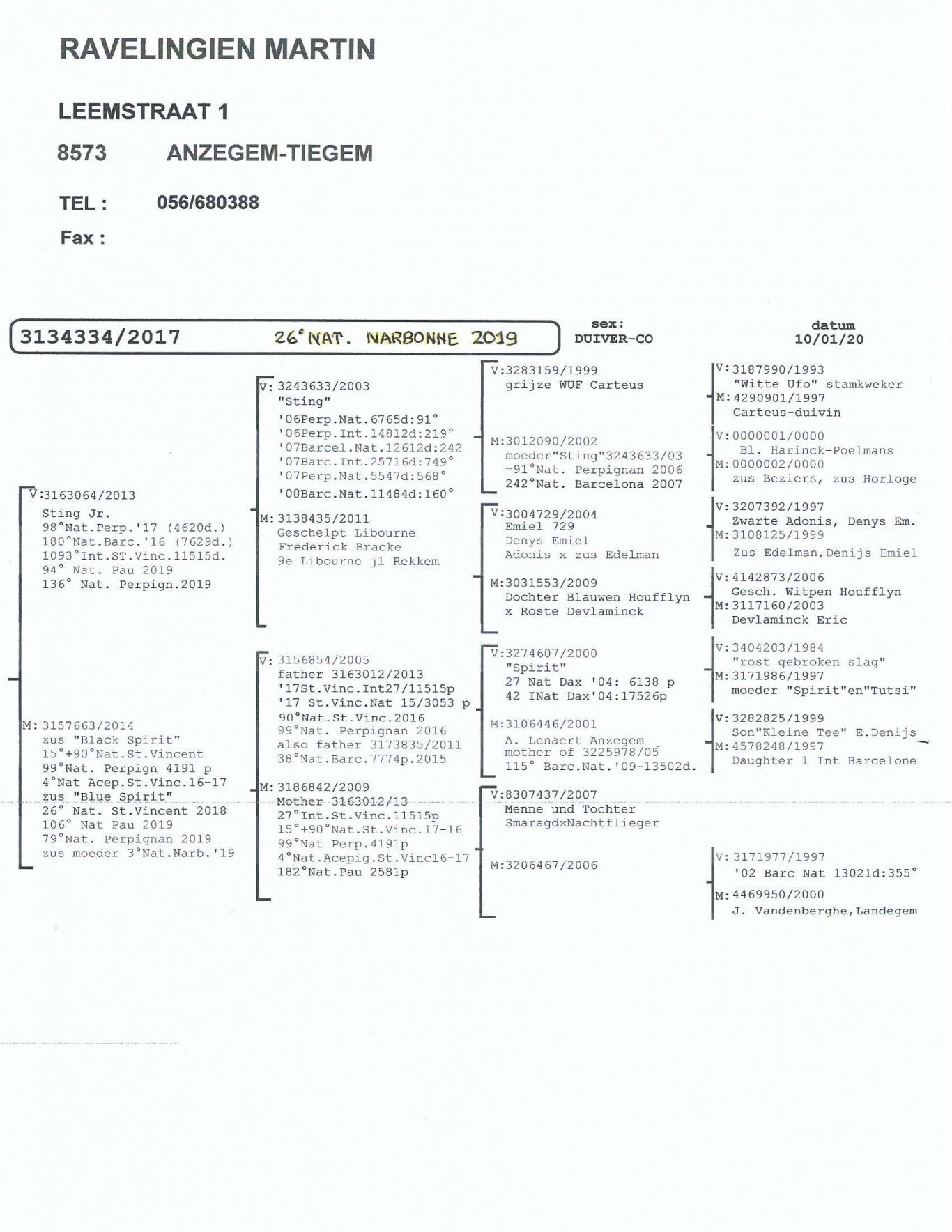 *Feeding and the medical side:
The youngsters are being vaccinated after 6 weeks and 5 months against paramyxo and during winter once against small pocks with the brush.
In Spring the widow cocks get barley and diet to eat. During the season the widow cocks get a light mixture (but enough) with some peas added. They aren't really being fed up towards basketing but they do get the last two days before basketing some extra fine seeds. During the season get a mixture of 2/3 light + 1/3 sport. The last two days he switches on to 2/3 energy rich + 1/3 light + a supplement of small seeds.
On a yearly base vet Pascal Lanneau passes by 3 times for a check-up. After the breeding period , the breeders get a 12-day cure against parathypoid where they are being vaccinated. During the season they are being treated 3 times against ornithes, this during 3 to 4 days (preferably towards the international races). Beginning of April the entire colony is being treated against trichomoniases.
After the international race a yellow drop is being given, next to this they get 2 days before basketing of an international race an appertex and the day before basketing a tricho pill.
At arrival the recuperation is very important, they get electrolytes and grape sugar in the water...in a matter of food they get a mixture with few peas and again a lot of small seeds (like for example birdseed, hempseed, sunflower seed, cabbage seed).
2 meals a week they also get some supplements from Dr. Peeters like oil, brewers' yeast, milk powder.

*System:
Martin has adjusted his system in over 30 years only a few times. His breeding couples are being coupled around the weekend of Marseille. 3 rounds of youngsters are being bred, out of the best the eggs are being replaced. In the month of September the first youngsters are being weened...the last youngsters 2019 were weened beginning of January. All youngsters are together on one big loft. During the entire winter they go out on a daily base for 2 to 3 hours. The late ones are being trained as from April and race all towards 350km. A part of them have to go to one national race like Chateauroux.
When they are 2 years old they are being raced on widowhood, the race twice a greater middle distance race, and to end their season Narbonne...Martin always has some pigeons that race head on Narbonne...in 2019 it became a super result.
As 3 year old they have on greater middle distance race and St.Vincent and Perpignan.
As 4 year old and older they race a few times 300km and will go than to Pau or Barcelona.
The racers are being coupled beginning of February and can breed for about 5 days, and will go on widowhood after this.
In the month of May they get to see their hen every week at arrival for about 3 hours. Before basketing of an international race no hen is being showed, neither at basketing neither at arrival. At arrival from an international race they go onto a separate loft for about 3days.
After Perpignan the widow cocks will go out about 4 times, and around the 15th of August they are being coupled and can breed twice on chalk eggs, to separate them around the 15th of October. They will go out again as from March on. Since 6 years Martin has retired, he does work about one day a week...and he arranged it that he only has to work half a day from March until June and in July until half of August he doesn't work at all (during the winter time a bit more). Where his wife Arlette used to help out with the care of the pigeons, she only helps out now once in a while where necessary. 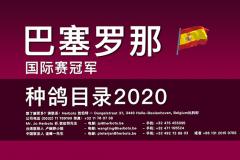