E.B.C. Europe vouches for top quality for specialists on the Barcelona races

For many amongst us is racing Barcelona a dream, winning this classic is the ultimate of the ultimate. Also in England they participate to this Spanish flight and the idea to go for the very best pigeons on Barcelona and bundle these forces was born.

That’s why they started by buying direct children from super racers on Barcelona and afterwards real top racers themselves were being accomplished to these. A breeding loft to dream off where special couples became the new normal.

This topper from 2015 won in Holland in the year 2018 on a national level against 3,912b over a distance of 1151km. Heavy weather, a real marathon distance and then is winning only put away for the best. Both him as his sister made the cross over to England.

Special in this auction are 2 direct children to this winner. 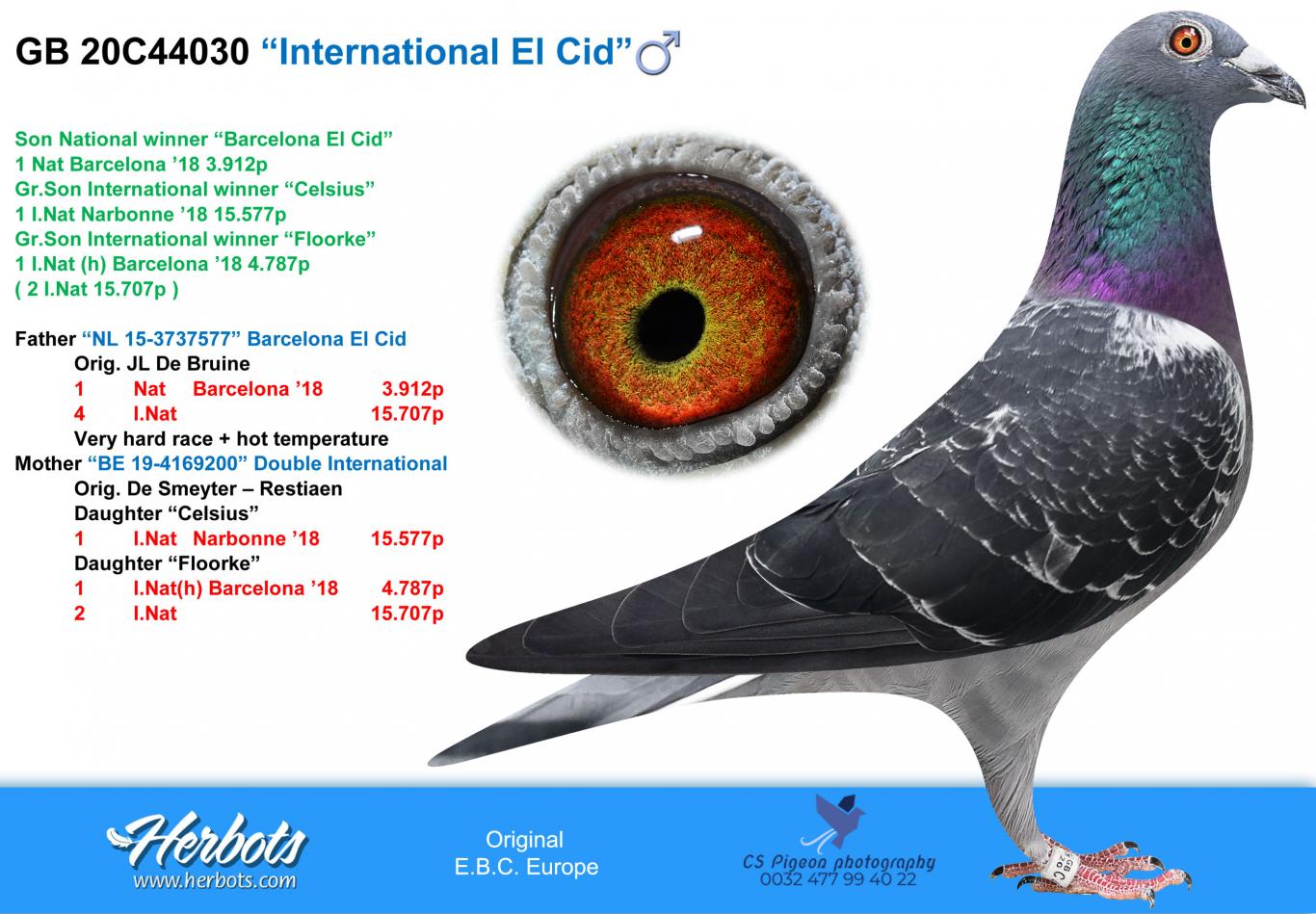 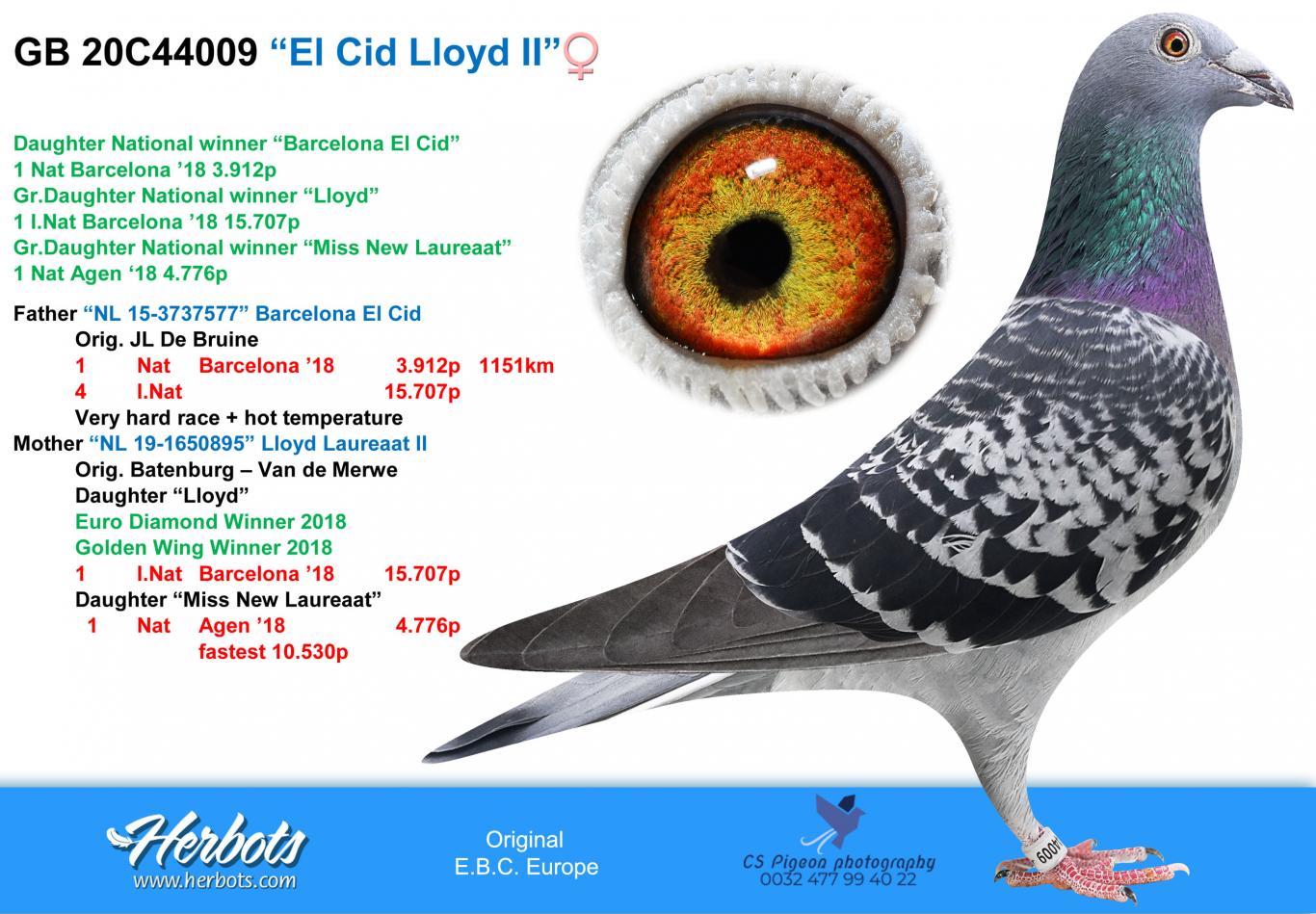 We all know the story from top hen “Silke” from Jelle Jellema. The top fancier out of Holland that won with this hen inn 2016 the 2nd International Narbonne against 7,811 pigeons and in 2020 shined again with this same top hen and won again 1st National Barcelona 4,480b and 2nd International Barcelona 14,500b old birds. Unfortunately this hen was stolen in Autumn from the lofts of Jelle Jellema and that’s why this offer is even more exceptional.

A direct daughter to “Silke” was coupled to a son of “New Laureaat” from Batenburg – Van de Merwe. Or again a Barcelona winner with the 1st International Barcelona 25,382b and the 8th National Barcelona 12,281b the year before. In other words, golden Barcelona origins crossed in with each other. Who wants this unique opportunity… 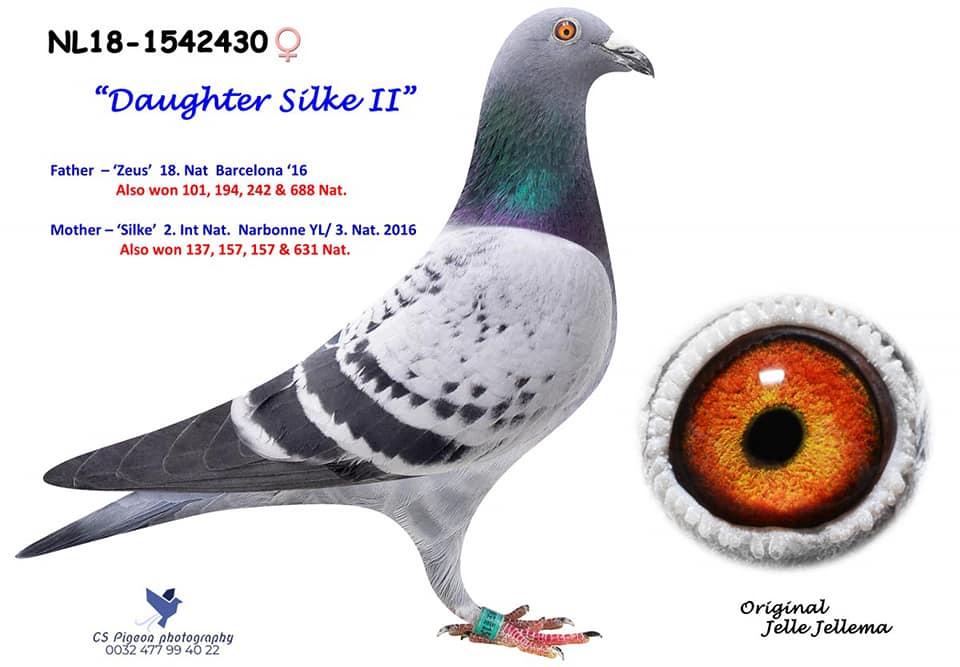 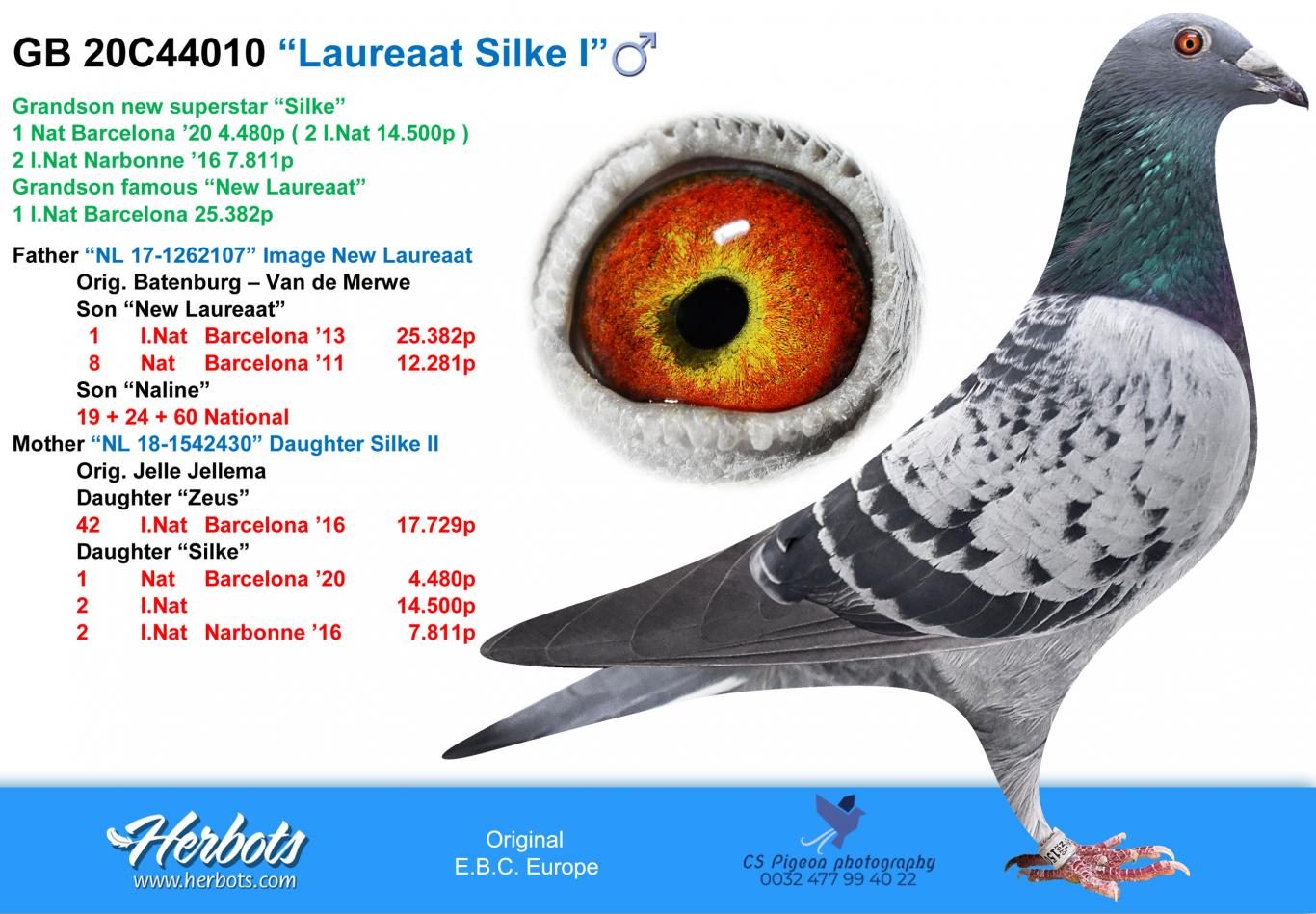 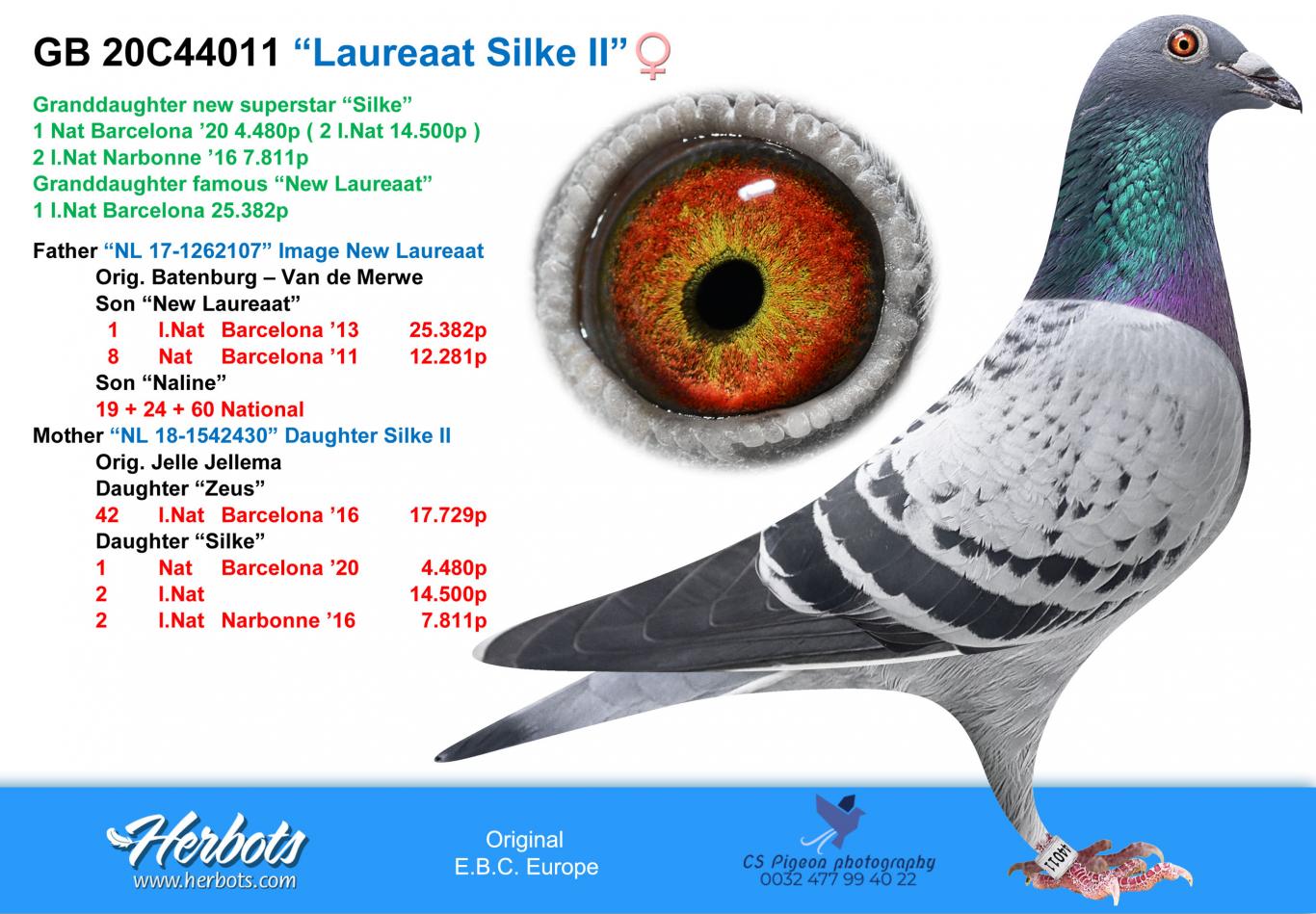 Also in Barcelona there was a special winner namely ‘Jef’ from Stijn & Jeroen Rans. A classful pigeon that proved himself on the extreme long distance and left in 2019 the competitors one and a half hour behind. This was something that was noticed by Hugo Batenburg and he moved to Holland which was a signal for England to go for this new top pigeon and to buy children out of him.

Specially for you an inbred product to “Zoon Jef” x “Dochter Jef” with on top off that inbred to “New Laureaat” Batenburg – Van de Merwe and “Kleine Jade” Jelle Jellema. 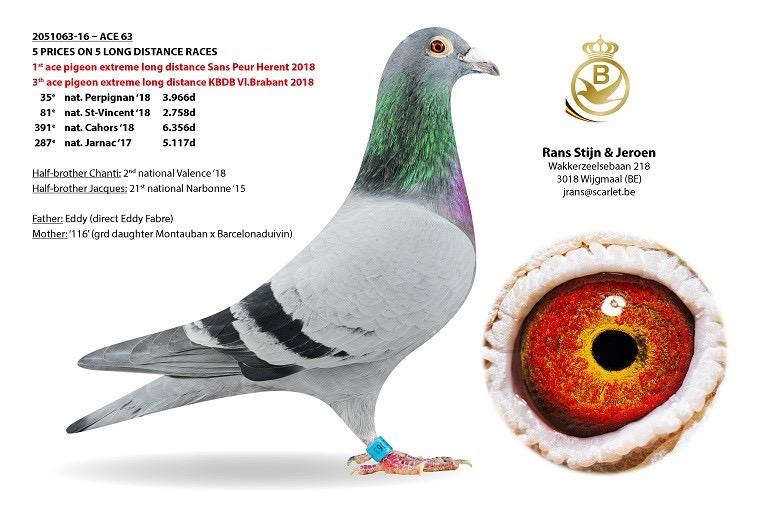 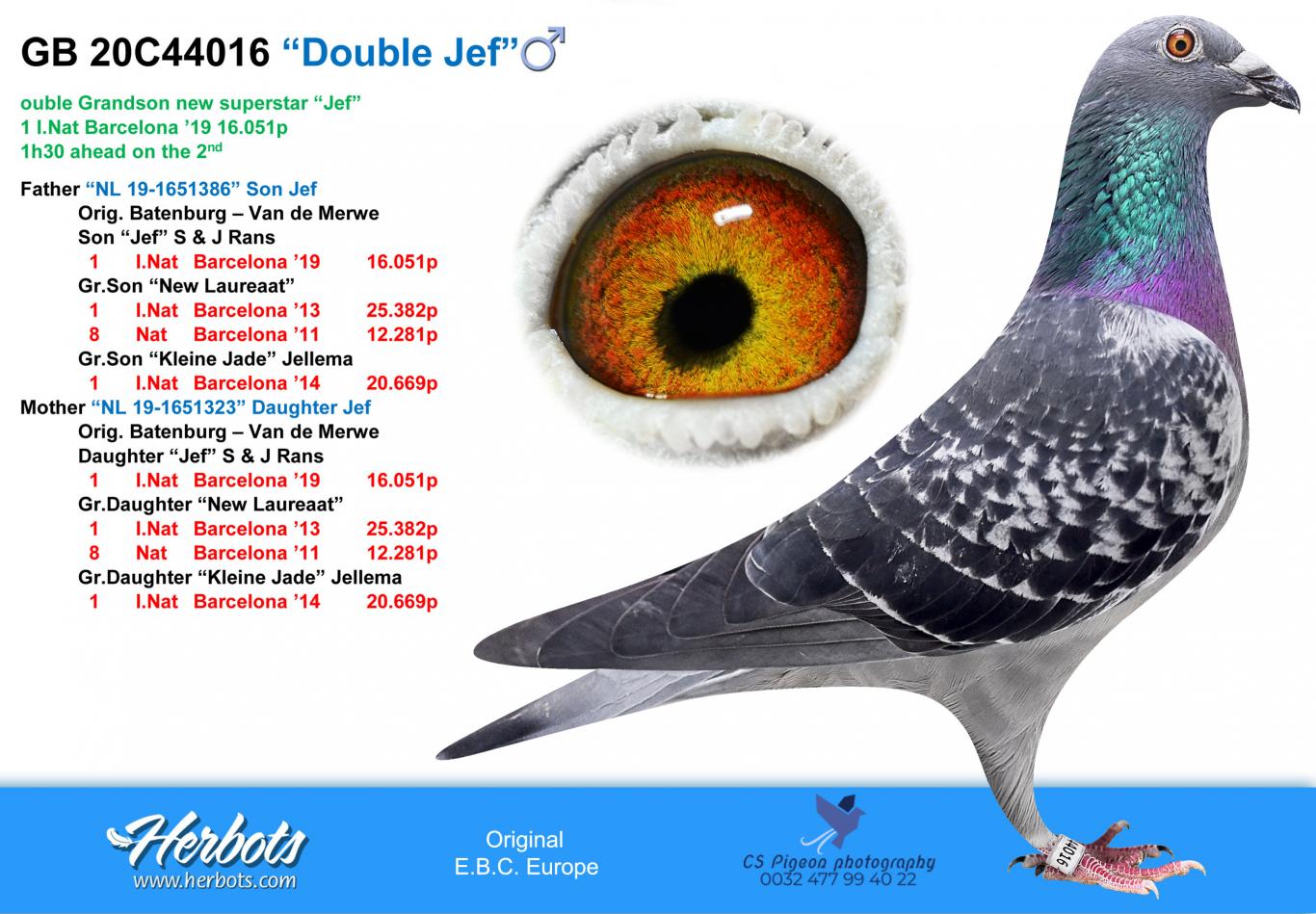 By crossing in other children from international and national winners you can compete with the best on the extreme long distance. 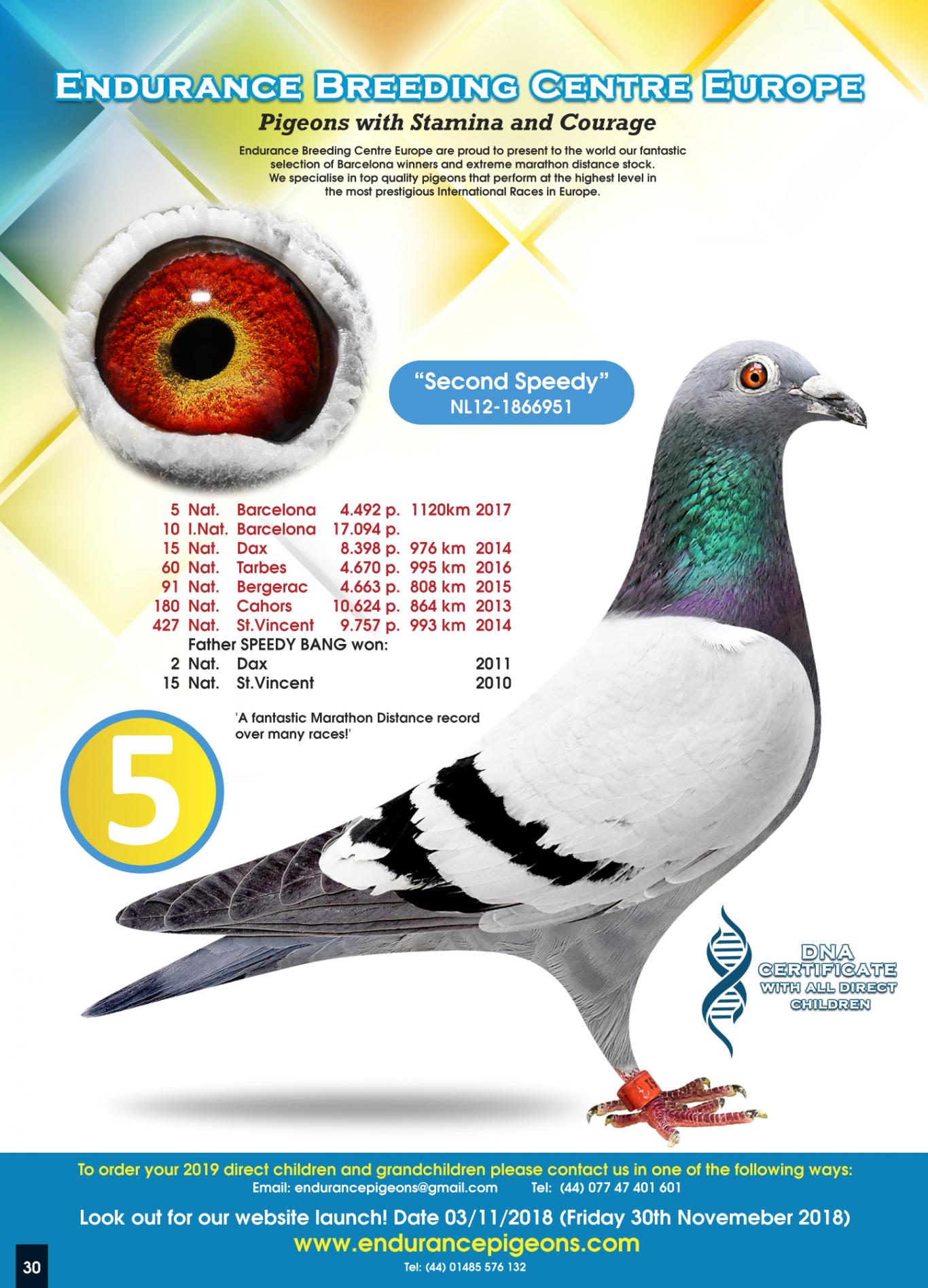 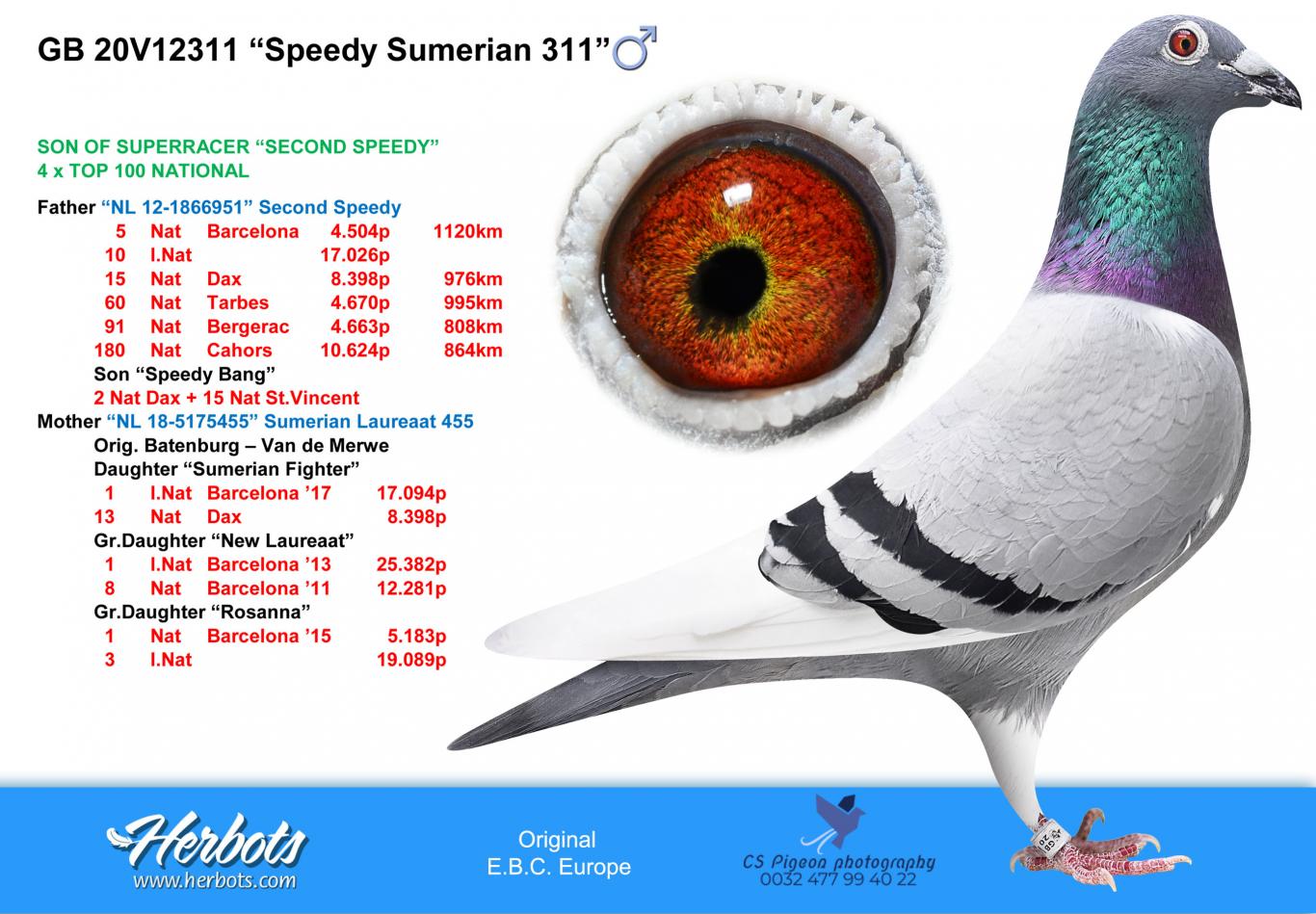 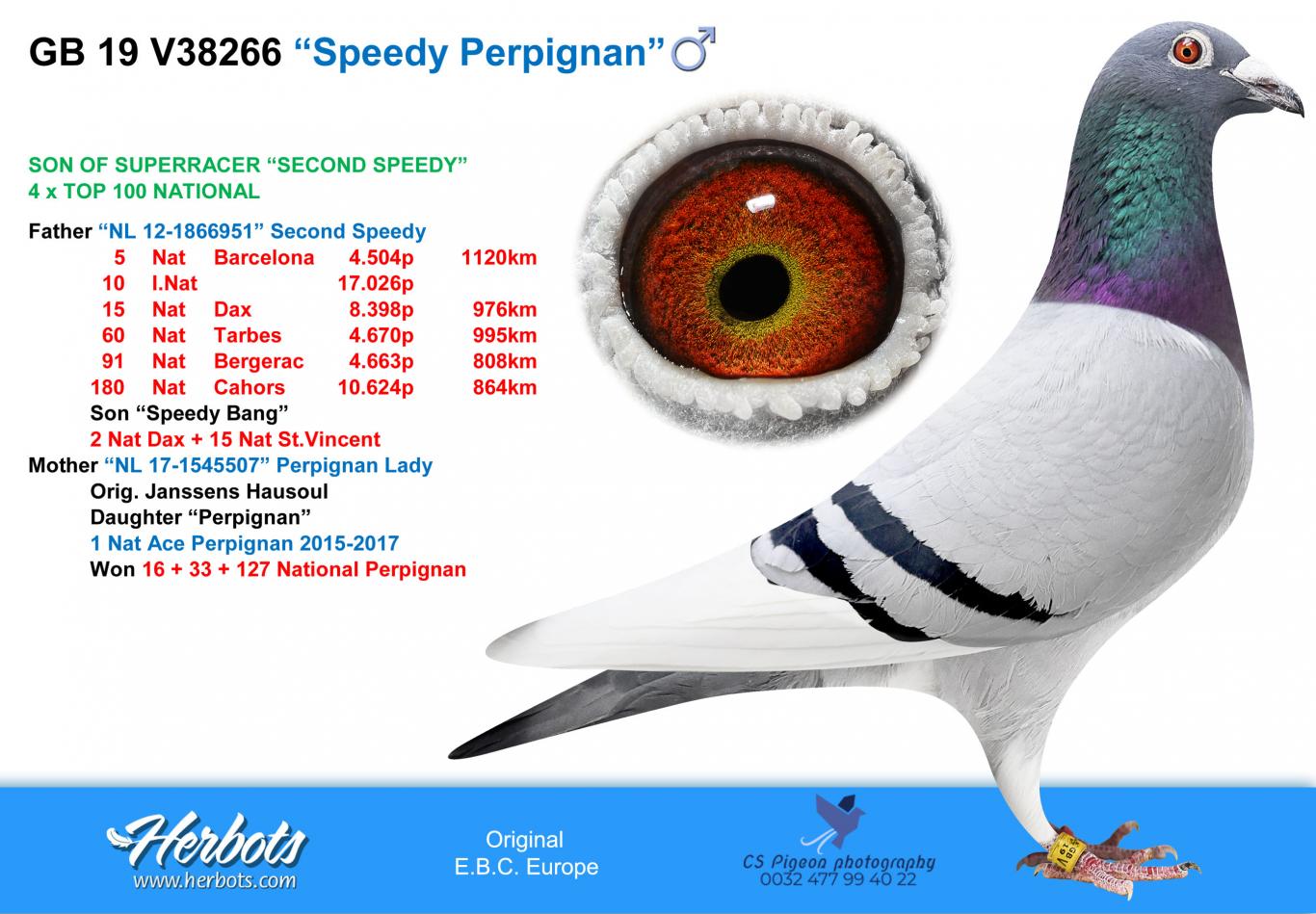 In 2016 it was Lieven Buelens that won with the 2-year old cock “Conquistador” in very though circumstances 2nd National against 7,693 old pigeons ( 5th I.Nat 17,732b ). The blood of Lieven Buelens is going around already for years on Barcelona and that’s why the purchase and to get this top pigeon to England at a young age. He is being coupled to his own strain over here ( Daughter “Nightflyer” 21st National Barcelona 8,764 pigeons ). 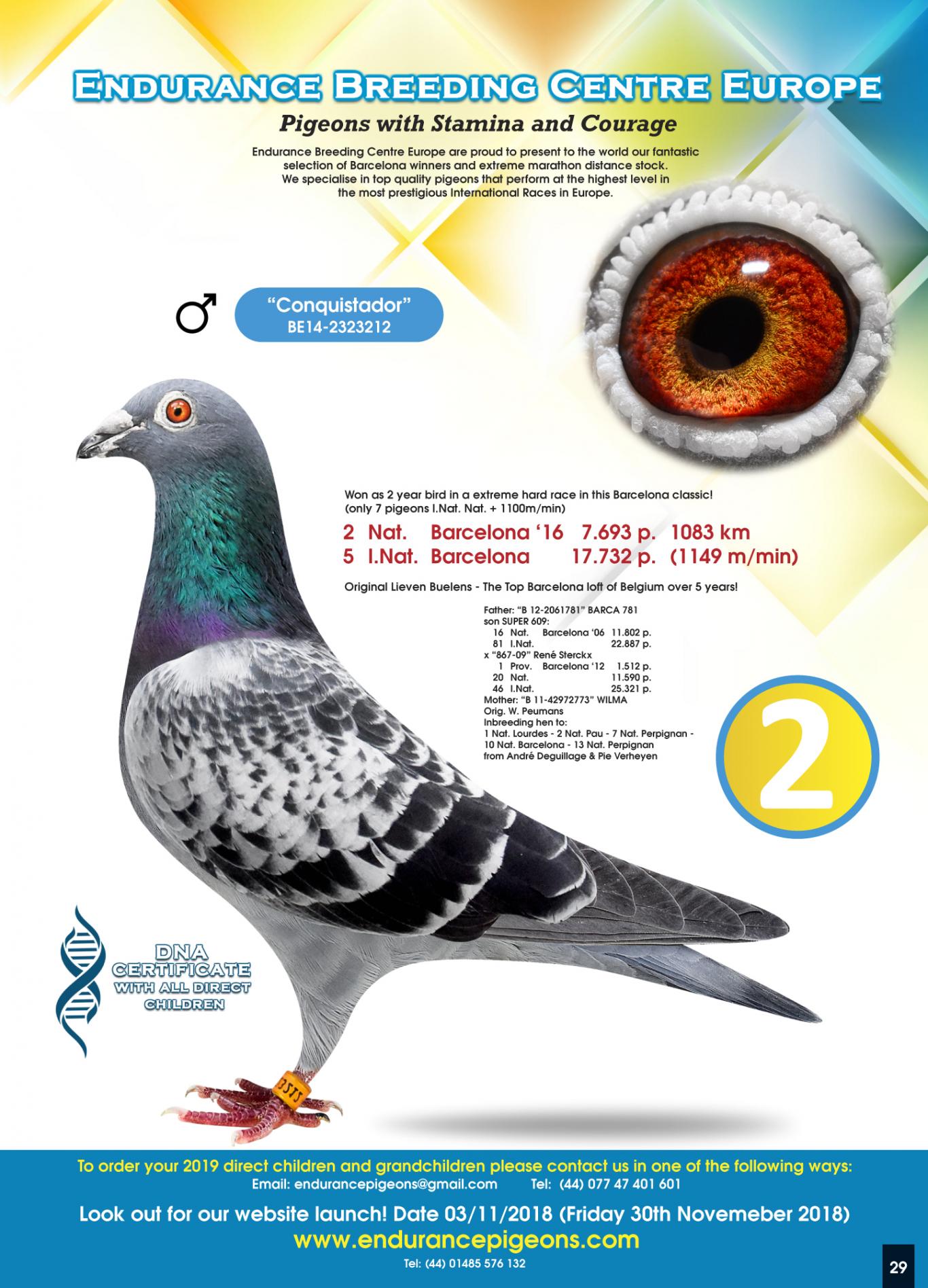 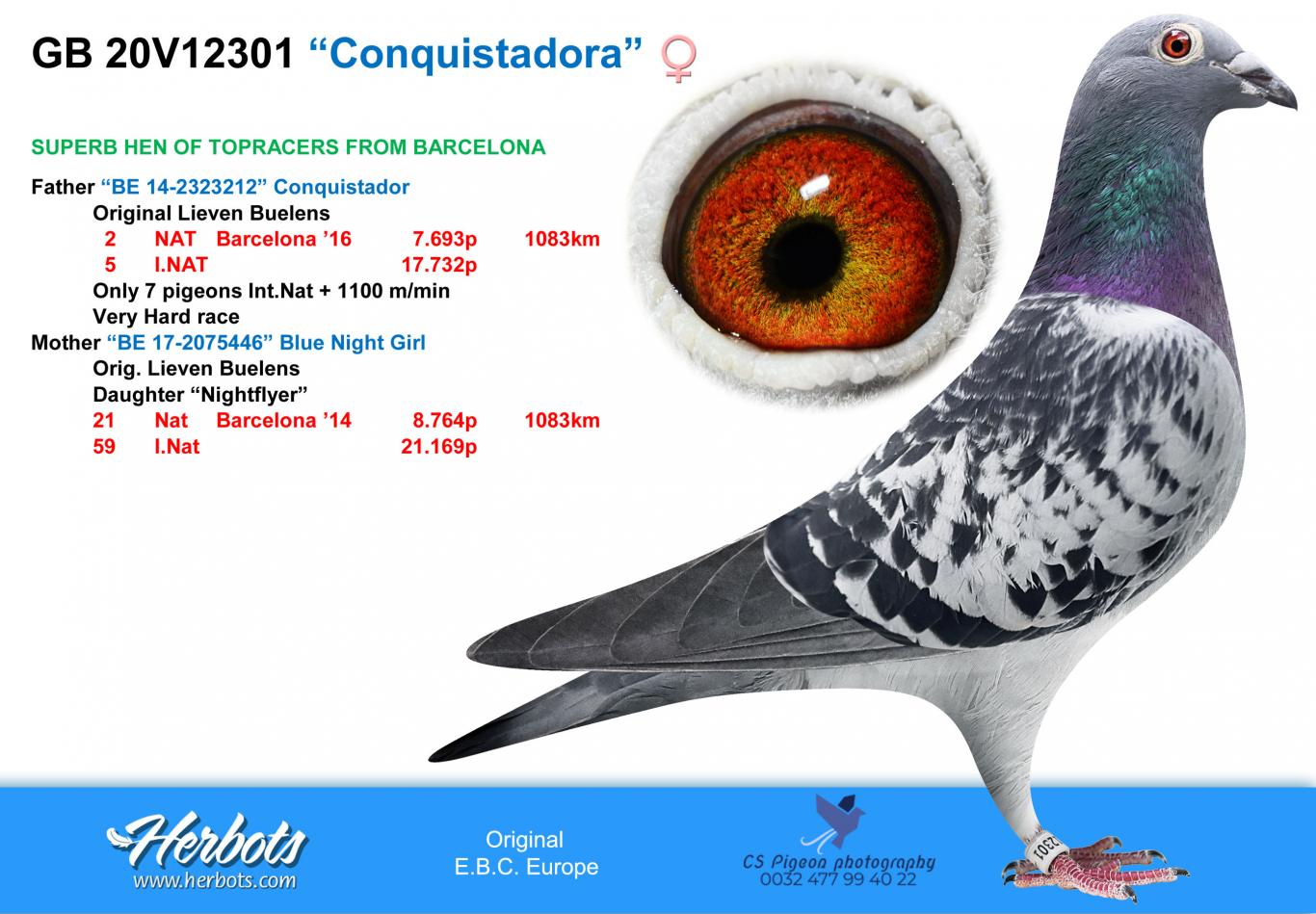 Have a look at the auction and discover the top quality on Barcelona winners that is being offered in 1 auction. 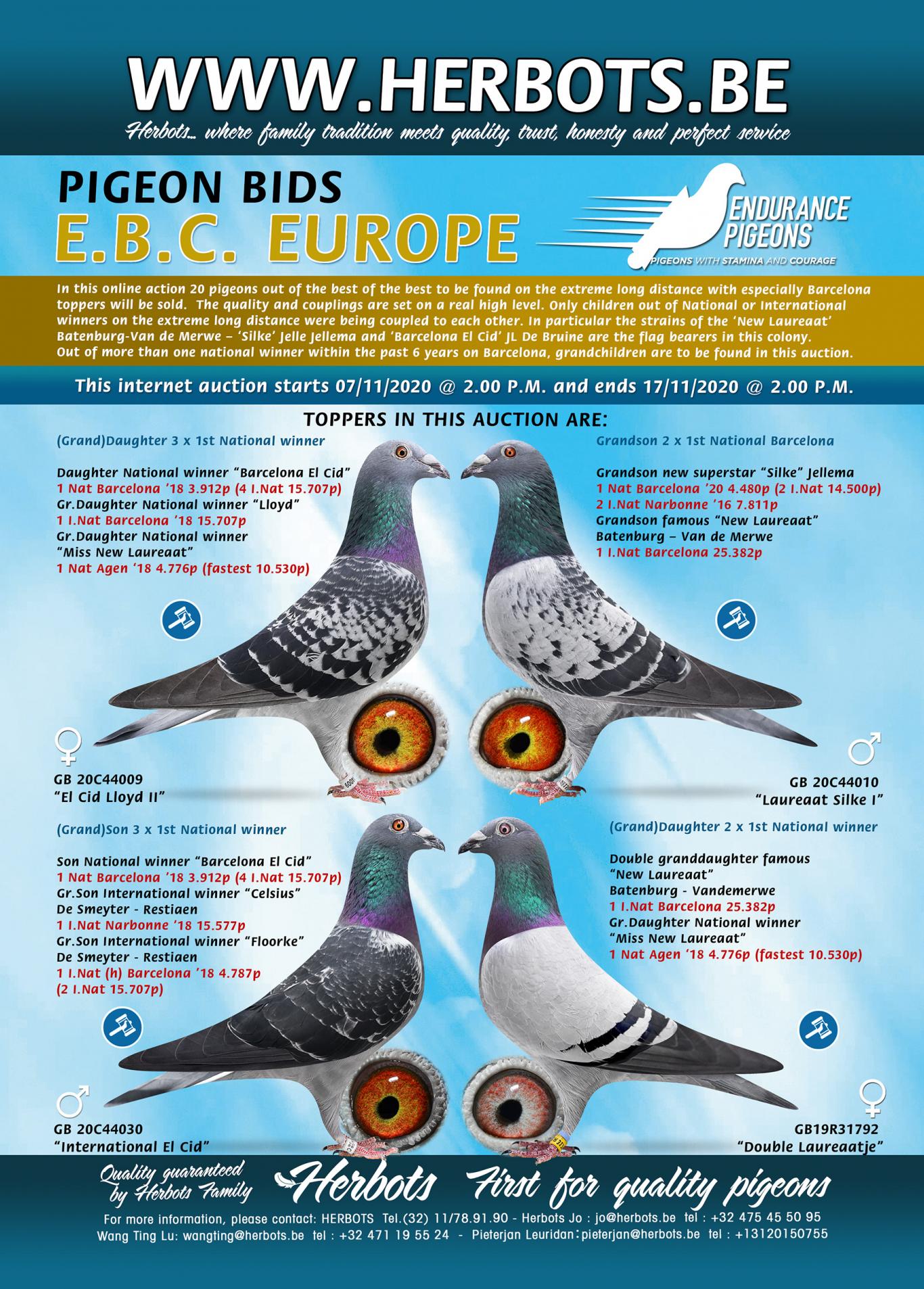