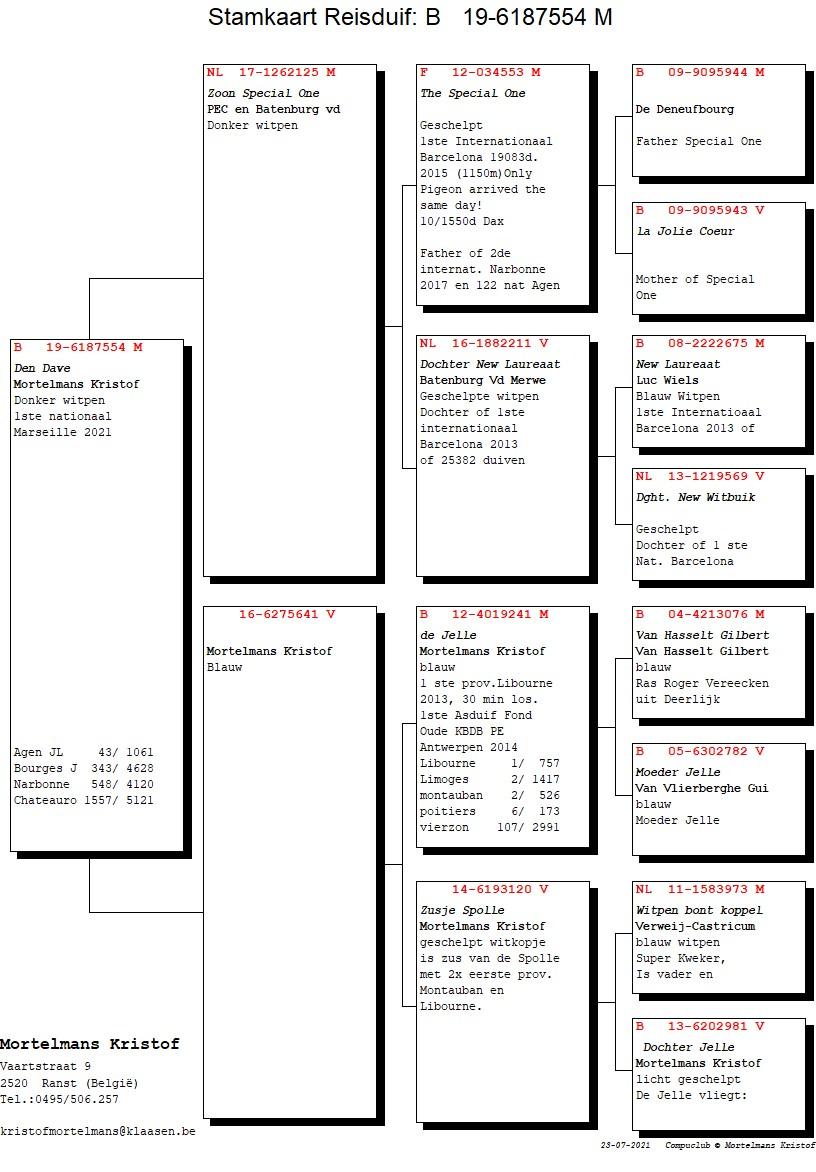 On the last Rhône race of the season it was a fancier out of the Antwerp province that took away the victory. At about 07h00 in the morning the pigeons were released in Marseille, the distance between Marseille and Ranst is 884km and the winner came home at 22h06. He just didn’t make 1,000 m/m average which means that this was again a very hard race and only makes his victory extra great. It isn’t the first highlight from Kristof Mortelmans as he is having a really great season at the moment. When I visited him he said, the team for Perigueux is also very good and those for Narbonne next week as well.

When we then saw a few hours after my visit that he also won the 1st Provincial Perigueux with the yearlings and again his 1st signed is in the clock as 1st pigeon, the condition is top. His first pigeons were 20 minutes ahead in comparison with the rest of the province and has the same family as the winner of Marseille. Just top class and we are very curious what the other pigeons will do on Narbonne next week as these also already set amazing results before this season. Until now this is after the 1st Provincial Barcelona, 1st National Marseille and 1st Provincial Perigueux his 3rd top result in a matter of a few weeks’ time.

The racing team exists out of old cocks that are being raced on the classic widowhood system, old hens that have as goal to shine on Barcelona and yearlings are being raced on total widowhood. Maybe a lot to handle…but this is how he spreads his focus with his different teams over the entire season.

The old widowers are on two identical lofts of 16 boxes, the loft in the middle is empty and no pigeons reside here but is a copy to the other two lofts. They always get in here after the training and can recover after arrival of a long distance race and also get their hen in here.

This motivation loft is according to Kristof a very important factor, 2 cocks are always in the same box when they get in here after each training and this motivation amongst each other is maybe even better than a hen. After a training they can’t sit here too long, a few minutes is enough. After arrival of a long distance race in the afternoon they can stay here with their hen until the evening and from the extreme long distance on it is until the next day in the morning. At the preparing races this loft isn’t being used to show their hen. But especially for recovery and motivation this is something that Kristof finds great! Also for the late comers that want to get some rest this is ideal.

The old hens are being raced first on widowhood but their goal is on Barcelona, so they are being basketed on 10 days breeding. This is the only loft that is being raced on nest position.

The yearlings have another system, the team is being raced on total widowhood with as goal to shine on Agen and Narbonne.

From this season on I use something else than a flag to make my pigeons train namely a skydancer. They know this so well and is being used twice a day for the widowers who have to train from May on 2x 45 minutes. The hens only do this once a day but then for one full hour. Afterwards I let them train freely for half an hour before I call them in. But this year I noticed how hard my pigeons have a real base condition.

How do you take on the system with the youngsters ?

These are on the same shape of lofts as the old ones, so concrete plates at the sides, roasters on the floor and corrugated iron on the roof. At the front they have big aviaries where they can reside in when they want. I don’t darken my youngsters and the 1st round already did a middle distance race and will have to do Bourges national now to get experience. After this race they will be stopped and I will only do some training races with the late youngsters.

I make use of mixtures that are to be found at Van Camp in Boechout. The old and yearlings get towards the middle distance races fully the Grand Prix mixture ( protein poor) and I switch onto 50% Moulting and 50% Sport until Limoges. From then on only Sportmixtures will be given and I always feed them as much as they want so the pigeons always have enough. The pigeons that have to do the extreme long distance races get the last 4 to 5 days extra fat rich seeds (sunflower pits, hempseed, wild seeds, Bordeaux corn, black corn and wild seed that I mix myself).                 Aside that I also give once a week amino acids, vitamins and get proteins at arrival.

What the medical story is concerned I can keep it very short and they didn’t receive any antibiotics this season. I only treated them twice against trichomoniases and they get yellow drops over the food weekly the day after arrival of a race. 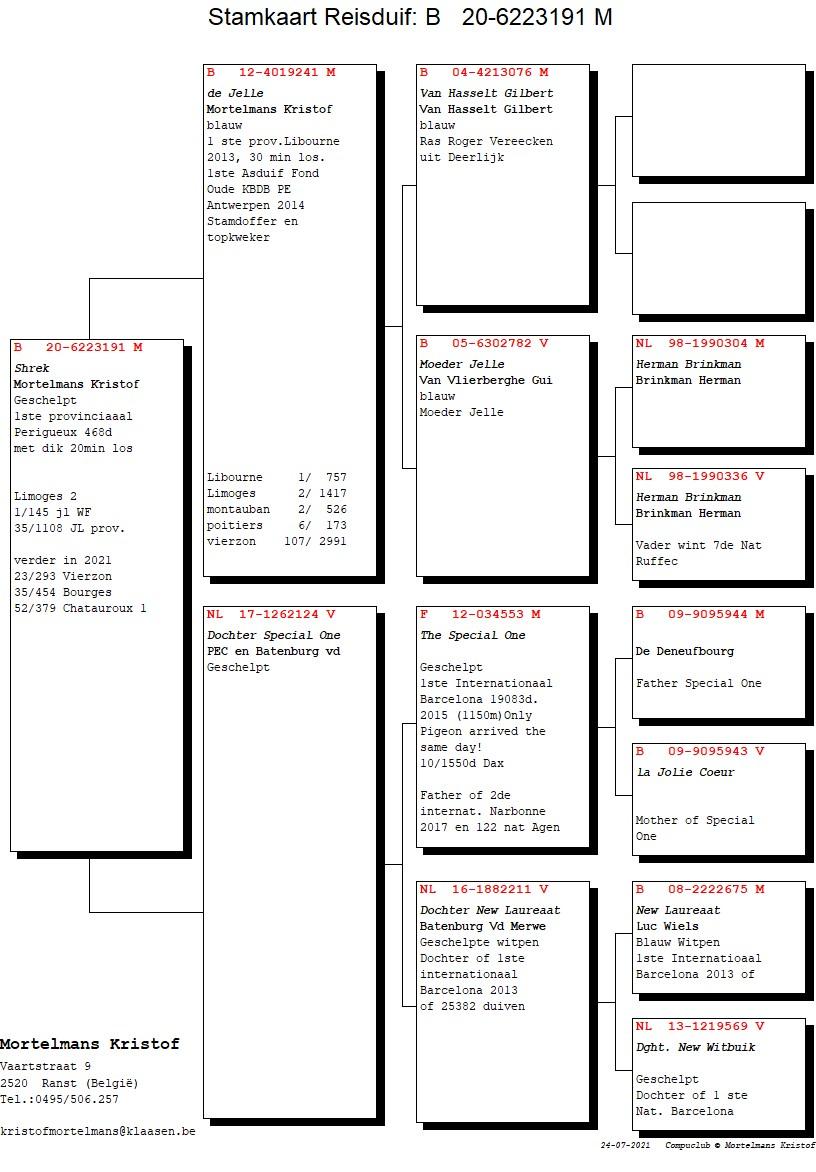