Ophasselt: With “Golden Lady” we have a super hen that won the national race out of Chateauroux (normally it was Gueret but due to the bad weather circumstance the releasing point was replaced by Chateauroux). Why we put the stamp of ‘super hen’ on this national winner? Well …“Golden Lady” B20-4008636 won a few weeks ago also the 1st provincial Vierzon against 4,543 year birds (also the fastest against 11,858b). Juicy detail…the provincial victory out of Vierzon was won at an average speed of 1,679.89 m/m. The national victory out of Chateauroux at an average speed of 1,094.49 m/m. In other words…head or tail wind…”Golden Lady” isn’t impressed and races in all kind of circumstances as fastest home wards. Pure class….

“Young, talent full and fanatic”
No, we’re not talking about the cycling phenomenon Remco Evenepoel but about the national Chateauroux winner Arno Van den Berghe from Ophasselt. Arno is only 19 years old, student ‘real estate’ in Aalst, grown up between pigeons and a guy with a drawer full of fanatic pigeon plans. The recent provincial and national victory is for Arno more than a motivation to continue the same way and who knows a beautiful future is waiting for him.
Father Rik is racing pigeons since 1986. Noyon was his favourite race but when he took over the butchery from grandfather he didn’t have much time for the pigeons anymore. Son Arno helped out where he could and this is how the known ‘pigeon germ’ did his work. In 2015 Arno took over the pigeon loft. First with the necessary help from father but in the meantime father Rik figured out that Arno has the pigeon game in his fingers and since a few years Arno is setting out his own lines. After a few strong seasons on the short distance he switched onto the middle and greater middle distance. For that reason he looked for the necessary reinforcements as well and at this first instance at Gert Huysmans (Balen). In 2015 the youngsters out of the racers (born in August) bought but he made the mistake to want to race them. The unexperienced youngsters were thrown a bit too fast before the lions and that’s why another round of youngster was bought in 2017 but now they got immediately a spot on the breeding loft. A good move as the provincial and national winner is a 100% Huysmans product.
As young fancier Arno gets a lot of support and advice of other known fanciers but as he is afraid to forget someone he doesn’t give a list of names.

A team of 35 widow cocks, 23 racing hens, 180 youngsters and 35 breeding couples are to be found on the new lofts of the Van den Berghe family which can be seen at the top of the ‘Gapenberg’. The provincial Vierzon victory was won by a hen and that’s why we’ll have a look at Arno’s ‘hens method’.
Arno: “The hens are being raced on the widowhood system and for every two hens I’ve got 1 cock, the jealousy cart is being drawn. When the breeders start their 2nd round, half the hens are being coupled as well and can raise youngsters. The other hens stay on the ‘Winter regime’ and are only being coupled at the start of the season to breed for a few days. Just mentioning, ‘Lady Vierzon’ raised a couple of youngsters.
The hens reside during the week day and night in an aviary (see photo). The open side is South-East directed. They were also being darkened over here from half of February until the end of April.

On the day of basketing the hens can go on the loft with the boxes where their cock is waiting for them. The hens who failed the week before can sit with their partner for 30 minutes. The hens who won a prize only for 15 minutes. At arrival the first arriving hen can see the cock, the other one doesn’t. ‘Golden Lady’ won on her first middle distance race the 8th but then she failed twice and I saw that she was jealous that her ‘enemy’ could stay with her partner and she didn’t. Maybe this was her stimulation to hit hard on Vierzon and Chateauroux. The hens are being fed twice a day. At the beginning of the week it is “Lady Mix” (Van Robaeys) where 10% linseed and rapeseed is being added to. Feeding up is being done with “Clicque-Mix” (Van Robaeys). In a matter of supplements we use the products out of the Winners program.

Medically seen they cured before the start of the season against trichomoniases and ornithes (suanovil). Since then they didn’t get anything anymore, aside the weekly yellow drop in the beak. We go each month for a check-up to vet Van der Cruyssen (Oosterzele). When all’s fine, we don’t give anything.
The cocks train daily at 17h but the hens don’t have a fixed training time. One time it is in the morning, the other time in the evening. “they have to adjust to my schedule” is what Arno says “fact is that when I come from school I first take care of my pigeons and start to study afterwards. I can study until late in the evening and when I know that my pigeons have been taken care of I study much better!”.

Arno and Rik…from the entire Herbots team a big congratulations and we are convinced that this won’t be your last big victory. 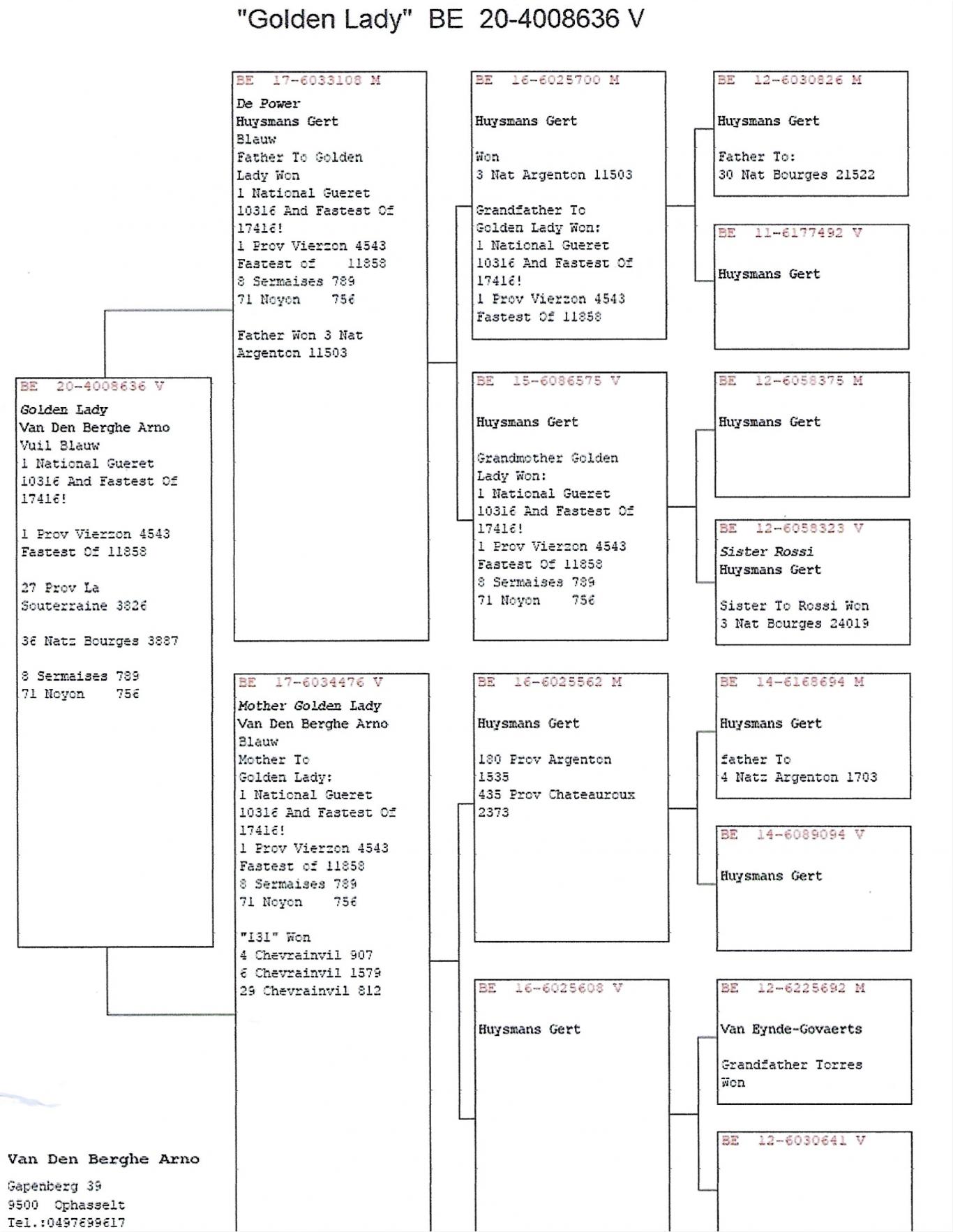