Duffel: For those who hear a bell ringing when mentioning the name Roger Volkaerts…indeed…he isn’t at his first stunt. Both in 2017 as in 2019 he won the 1st National Ace bird Short Middle Distance KBDB. Two national ace bird titles in 3 seasons…it’s not given to many. And by the way, both the ace birds are still at the lofts in Duffel and believe it or not, they are used as partner for the racers. After the ace birds there is now another top result for the Volckaerts colony. On Chateauroux national a blue hen shined namely “B18-6242345”. At an average speed of 1910.16 m/m. she beat with big advantage the old pigeons from Boone-Van Extergem (1830.59 m/m) and De Ruyck Walter (1813.09 m/m). But that’s not all…at this speed the “345” was also the fastest against all the 12,814 Chateauroux racers.
Roger starts of his story: “Can you believe that I was surprised when she dropped? I don’t have a computer and a friend of me told me that I had to clock at 12h32 to be able to beat the highest speeds. I just wanted to bring in my clock from Sermaises but didn’t risk it as it takes a good half an hour forth and back to the club. Pigeons from Sermaises kept coming and when I called in some youngsters all of a sudden one with a green foot ring fell. Already one from Chateauroux and the clock pointed out that it was only 12h16!

Hens on the nationals

Since a few years they race with a team of hens (widowhood) on the nationals. This year the team existed out of 12 hens. At the beginning of the season they were darkened and this was a good thing as the national winner threw her 1st pin at the day of arrival from Chateauroux. The ladies are being basketed weekly as they don’t train a lot around the house. When they train 5 to 10 minutes it is a lot. And chasing them up is of no use as they will sit on the rooftops of the surrounding apartments. The national winner is of the bigger type and has a striking big wing. Maybe this was in her advantage to supported by the wind to put this amazing result on paper. But it isn’t only with wind in the back that she shines. Have a look at her palmaris :
1st National Chateauroux ’21 against 5,140 old – fastest 12,814b.
22nd National Issoudun ’19 against  11,465b.
23rd National Chateauroux ’19 against  6,377b.
67th National Chateauroux ’21 against  24,617b.
140th National Issoudun ’20 against  10,603b.
and so on…

The care is being kept as simple as possible. The food comes from a local moulder and the vet won’t get rich from Roger. Aside the obliged vaccinations he treats a bit on own means. This is how they all got a Flagyl pill at the start of the season and a few weeks ago when the youngsters weren’t 100% he treated with B.S., Roger also gave the hens during 2 days B.S. .
The cart of staying healthy in a natural way is obviously drawn here.

Roger, a big congratulation from the entire Herbots team 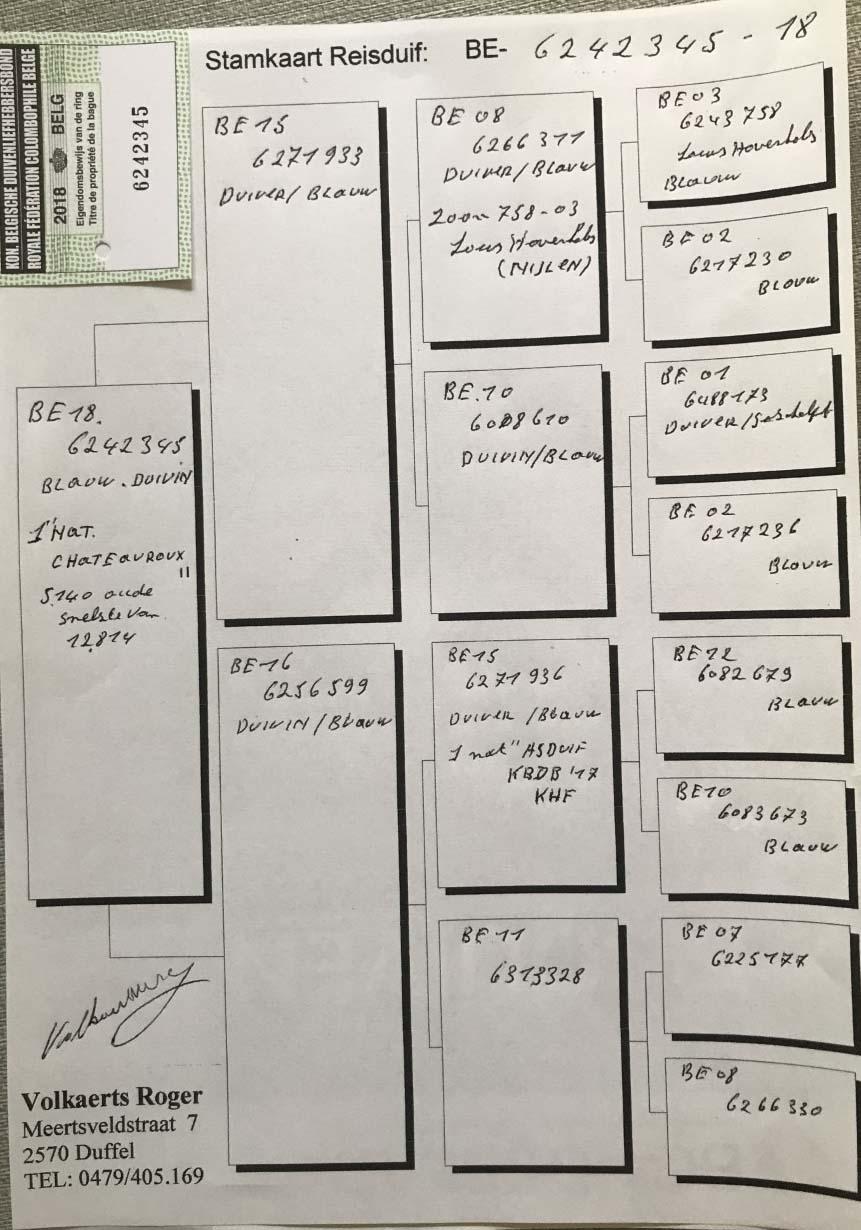