When the first pigeons from Limoges were clocked the entire international pigeon world looked at it with the biggest admiration. The pigeons from Vandenheede Freddy and Jacques took care of a new stunt. Against 20,075 Limoges racers they clocked the fastest 3 pigeons !
Freddy “I would have never thought that we would have the fastest 3 as I knew the clocking time from Sébastien Casaert and when I watched my clock, which is situated in the hallway of the pigeon loft, I knew he was in front of us. Now it seems that this clock isn’t right…
We did see them coming indeed…the three together…a hen, which has to enter the back side of the loft and 2 cocks who has to enter the loft front left. The hen went in easily and could take on all the honour, the 2 cocks noticed a bird of prey and hesitated a bit longer to enter. But nothing to be sad about…we are more than happy with this result…our season is a success already like this !

When class gets form

There has been written a lot about the system of Freddy and Jacques and also on Youtube you can find several video’s where their system is being explained. But where it is all about in first instance is the class of the Vandenheede pigeon. Since decades they might have the most impressive breeders of Belgium in one loft. All their national winners, national ace birds and Olympiad birds were never sold but always got a spot on the breeding loft. Freddy: ‘Our breeding strategy is based on one rule namely good on good. We have good pigeons in all shapes and sizes. We base for 99% on the results and this approach which we now follow since a certain amount of time lead us to the current top results. If necessary we make use of a compensation breeding. A big cock will be coupled consciously against a smaller hen, but we don’t go any further than that. We don’t look at eye signs or things like that. We couple on results and pedigree. “
We can assure you…we won’t find 5 fanciers that can cherish day in day out this kind of quality and when you can start off which such a strong base…and this classful pigeons are guided by experience fanciers as Freddy and Jacques…well…than it isn’t a surprise that the Vandenheedes more than impress the past years !

The national winner got the name “Laura”. “Laura” (B19-4084174) is a marvellous hen. A block of dynamite, full of soft feathers. She is part of a 90-headed hens team which are being raced on pure  widowhood (partner stays home). Freddy tells: ‘The oldest hens are mostly 2 years or exceptionally 3 years old. We found out that hens (but also cocks), once they have 10,000km in their wings, the top results stay behind, not to speak about the exceptions. This means about 15 to 16 races from 500km or about two seasons.

The lofts of the hens are at the backside of the loft of the youngsters. In the past this was different, but the front of these lofts are in western direction and it was less easy to get the real top form on these lofts in the months of April-May-June. We changed this and the hens now have the luxury to live on lofts that are pointed entirely East and have the sun already very early in the morning in the lofts which is extremely well for the form. The hens don’t breed before the season. They are being coupled  so they can be raced on a big youngster by the first national race on Bourges. So they are being trained on nest position and race the preparing races while breeding and on a youngster. After Bourges they go onto widowhood. The goal of the hens team is that they do a national race on a weekly base. Most of them race the greater middle distance races and a few long distance races. Seen this hard regime the older hens are limited and is the team being renewed severely yearly, as mentioned above. Also this is a part of modern pigeon sport. The pigeons aren’t spared until they are 3,4 or 5 years old. It has been proven since years that on the greater middle distance and long distance the best results are set by year birds or two-year old pigeons. Pigeons get to a lot of kilometres faster than in the past and so they are extinguished faster as well, also without talking about the exceptions.
The hens are being locked up 95% of the time in an individual nest box. The boxes in the hens lofts are built this way that the hens lock up themselves from the moment they enter their box. This makes them much more at ease, is the pairing up amongst each other avoided, but has the down side of a very intense care. All hens are being fed separately and foreseen of a separate drinking pot. At the contrary of the widow cocks who are being basketed without seeing their hen, all the hens get to see their partner before basketing. Also here they adjusted their way of working. In the past this was always exact half an hour, but now it depends on the available time and circumstances. The conclusion is that this isn’t that important, motivation isn’t less.’

We can state that the Vandeheedes did an immense stunt once again. ‘When class has form’ you can do a lot, but always has to be accomplished as well.

Freddy and Jacques …a big congratulation to the entire Herbots Team and up to the next ‘stunt’ I would say. 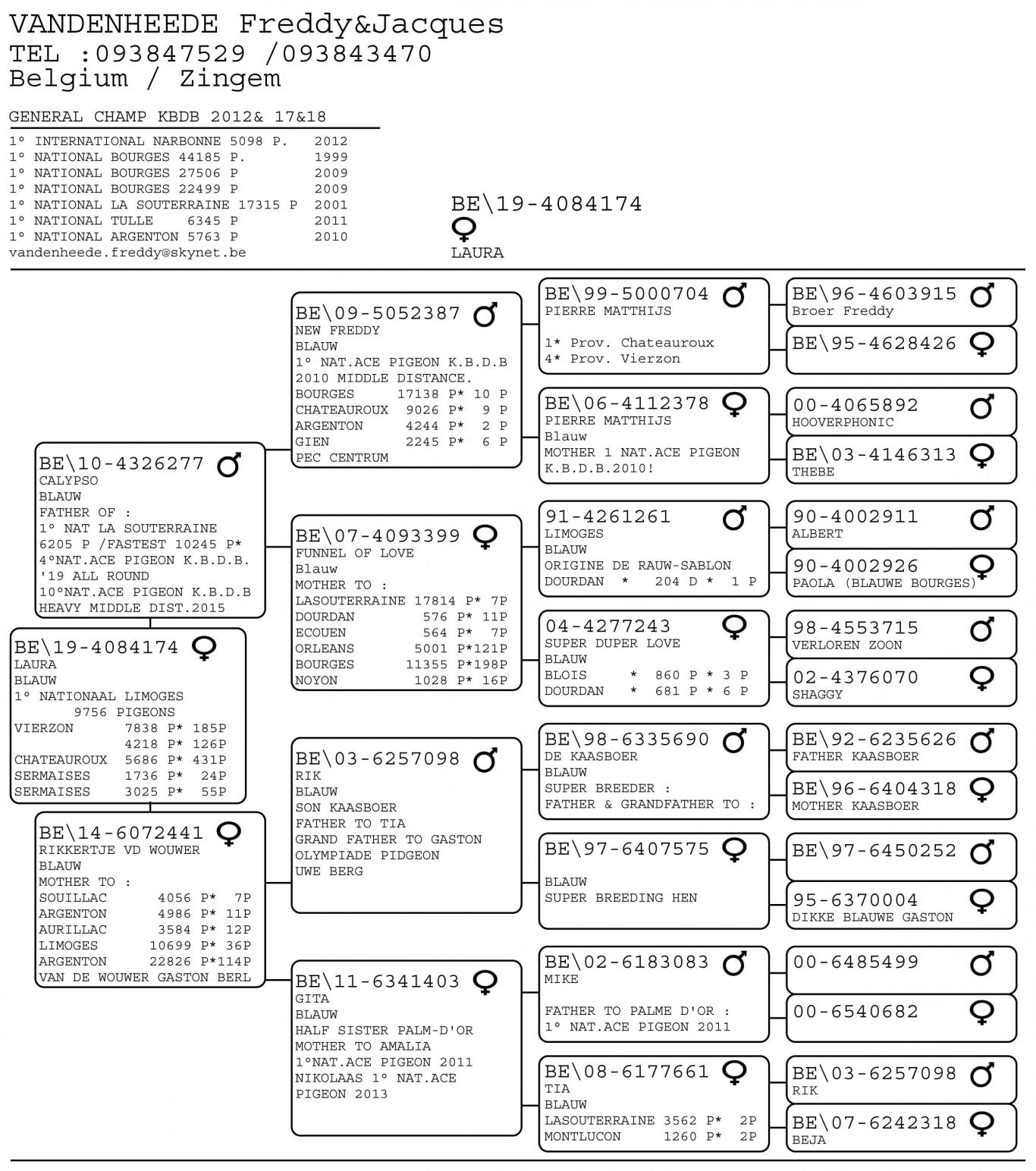 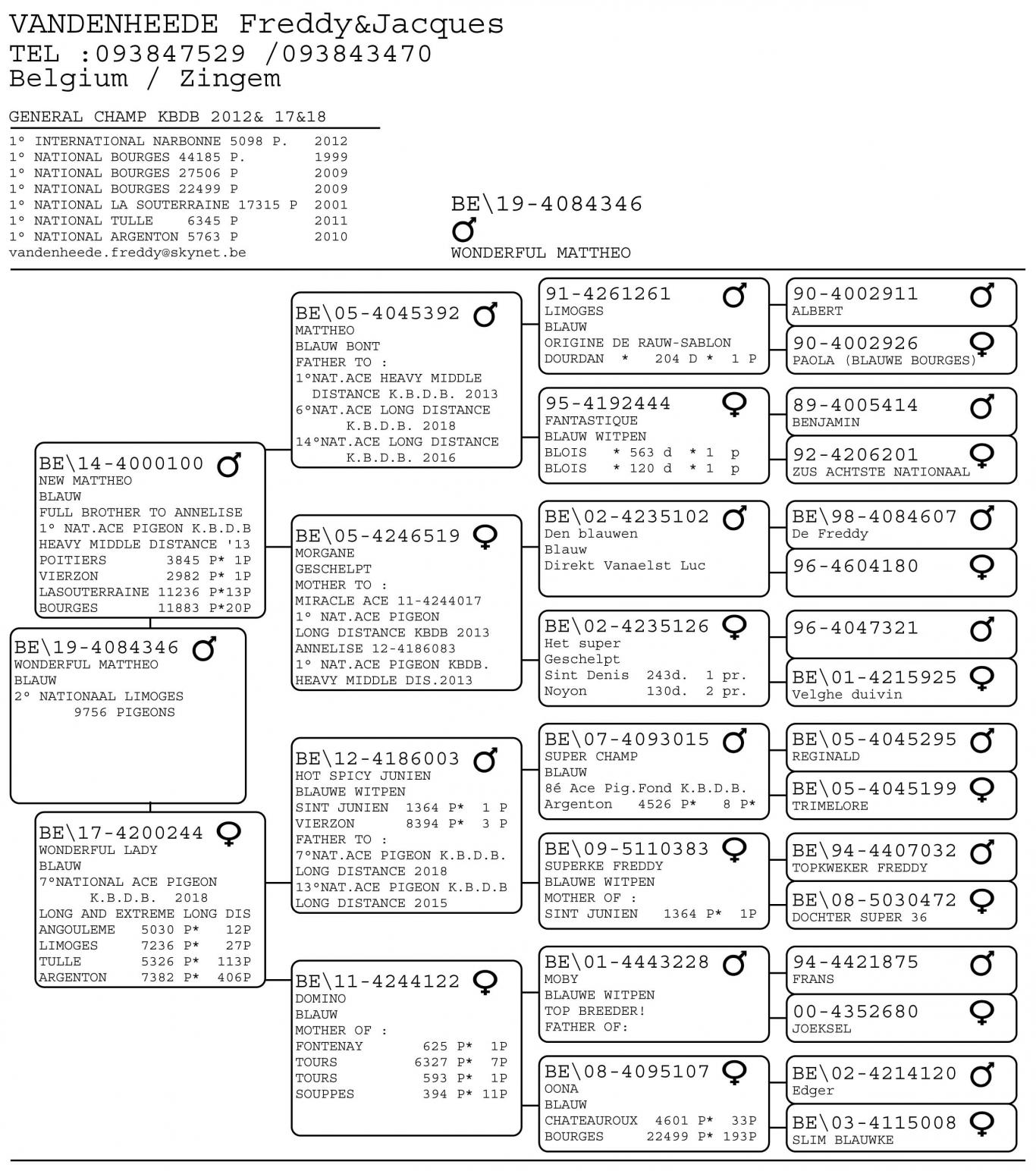 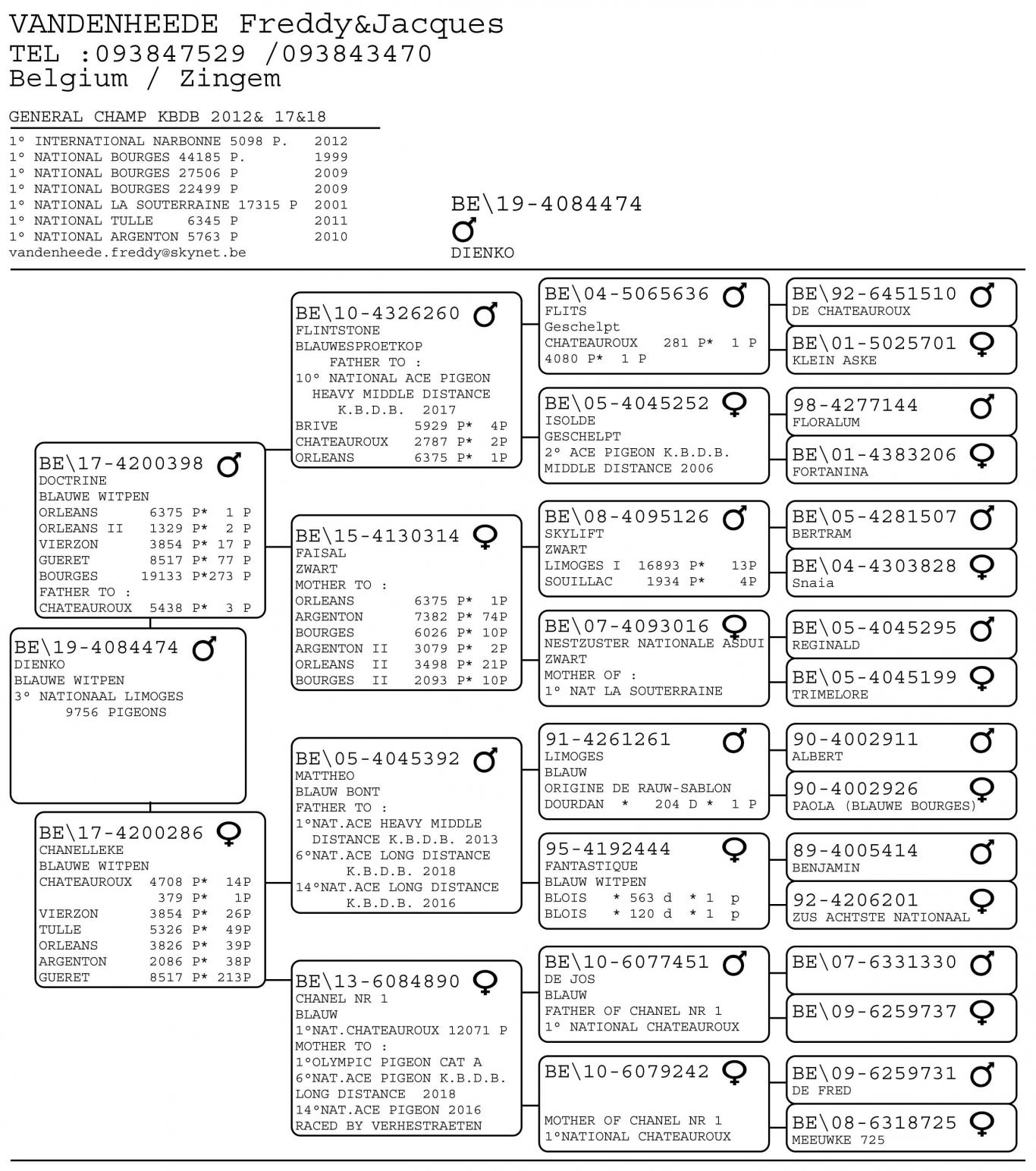