Berlaar: Berlaar in the province of Antwerp, this village breath pigeon sport as more then one top fancier live here and race like hell. One of them is Wim De Troy. Wim runs together with his wife Marianne and their sun Steven the colony. In 2016 they won their first national race namely La Souterraine against 16,613b and that same year they also became National Champion KBDB Long Distance youngsters. Thanks to the wonderful achievement of “Iron Lady” (B17-6050011) they won past weekend for a second time a national victory on their already impressive palmaris. ‘Iron Lady’ a wonderful blue white ping hen, won with an average speed of 1,322.23 m/m against all other old Montluçon racers. Steven ‘we did see her coming…in fact she came a bit too far out of Eastern direction, but you see that this isn’t always necessary to come out of the right direction. ‘Iron Lady’ is being raced according the chaos system and is the hen from our 1st signed cock old on Montluçon. The past season she already won a 7th Provincial Chateauroux 2,395b and a 9th Provincial Bourges against 3,201b.’

DON’T HAVE TO DRIVE TOO FAR

When you live in Berlaar you don’t have to drive too far to be able to get something good This is how Wim went ‘shopping’ at Jos & Jules Engels, Van Eynde – Goovaerts, Jozef & Swa Goovaerts ( De Kaasboer ) and Willy Daniels. Especially the strain of “De Keesboer” (via Jozef and Swa Goovaerts), the “Marianne” strain (2nd Nat Ace bird GMD KBDB raced at Victor Danneels ) and the “Boxer” strain are the once that gave on their genes very well. At the breeding loft are 40 couples where the rule is that when they give good once they also stay together as a couple. So they don’t do a lot of re-coupling..

This exists out of a team of 25 cock who are raced on classic widowhood and a 2nd group of 25 cocks and 25 hens who are being raced according the ‘chaos’ system. This last system is very simple…hens and cocks reside on separate lofts right next to each other and a quarter before basketing the door is being opened. The national races (greater middle distance) are marked in fluorescent on the racing calendar and the cocks are being basketed at that distance every two weeks, while the hens have to go every week. The weekend that the cocks stay home, they are being tossed at a distance of 60km.
They train daily once a day, the widow cocks in the morning and the hens right after them but as from mid of April this is only in the evening. During the week the hens reside in small boxes with rosters on the floor and the once that do have the urge to pair up amongst each other is being watched more severely but can keep on racing until the results are going down, then they are being taken out immediately. Wim “I race them on widowhood mostly until Bourges II and from then on I look at them pigeon per pigeon. When the 4th pin is out they won’t go along anymore.
In a matter of food I have the same system for the old as the young birds. On Mondays they get 50% Race and 50% Pure. On Tuesdays this is already a bit more Race and on Wednesdays and Thursdays I make the combination of Race and Turbo Energy from Matador. I add the last days also pealed sunflower pits, hemp and candy. Along the entire season I make use of supplements from Herbovet, Schroeder – Tollisan and Mariën. Not that I give something else each day, it is being limited but I do like to alternate.
In a medical way I treated a few weeks ago during 5 days against trichomoniases and about 4 weeks ago I treated during 6 days against ornithoses.’

With a national victory on their account this season is already a success but you feel in the house of the De Troy’s that they have the ‘grinta’ to add something else. And we do award it them entirely. 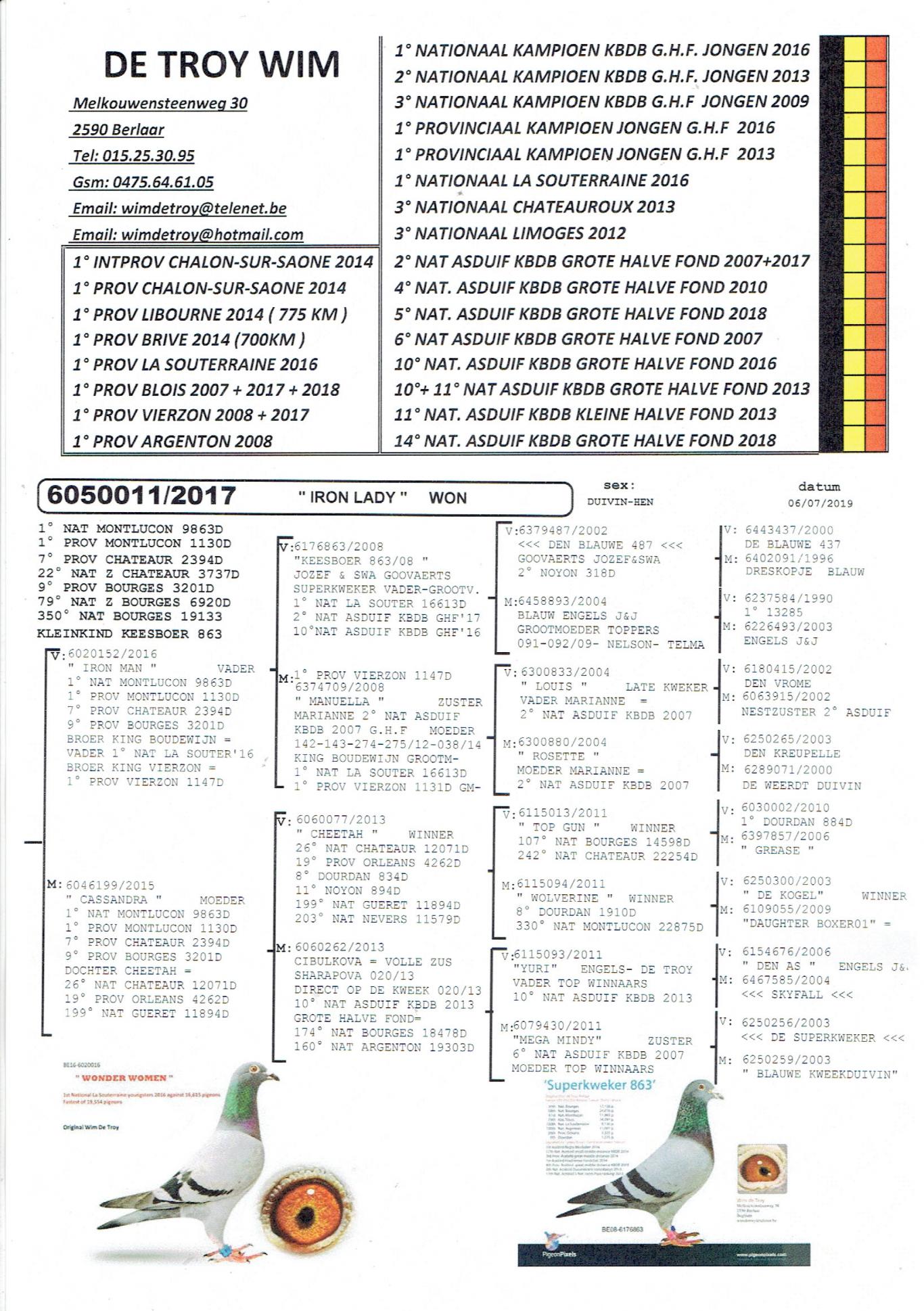