Those who want to compete the entire year through on a high level on the middle distance and greater middle distance has to have good pigeons, you would think that this is about a big loft but that's not the case at all. We are at the tandem of  Patrick Van Hoof & Kristina Vanwijngaerden  in the Antwerp province Schriek. They have a few top pigeons on their loft who can race amazingly well on the short distance race as on Argenton and this with old, year birds and youngsters. This is how Patrick loves them the most !

The racing team was raced in 2018 on the classic widowhood system and existed out of 12 cocks and 14 hens after a few races but did extremely well. In the season of 2019 this team was extended to 18 couples but he wanted to race these on the total widowhood system. He tried this before at his former address in Keerbergen and this wasn't too bad at all, let's hope that this will be the case in 2020 again....

Back to the Winter of 2018-2019, all racing pigeons were being coupled around the 20th of December and could raise a couple of youngsters. The best widowcocks can raise their own youngsters while the others got eggs from the breeders. During Spring there isn't a second coupling, but when the beautiful days come up in March and when they are planning to start the season they can come together for 1 or 2 days and are being tossed for a maximum of 3 times. They are trained like that very quickly and get to know the widowhood for a bit and can start off with their first race on Friday.

How hard and when do they train ?

In Winter they can complete their nest and go onto a regime for a while. They start like that on their first trainings and this turns out very well. They come out in the beginning in groups and from March on a daily base. I like to see that especially the hens are up in the air for one and a half hour before the start of the season, for the cocks I'm satisfied with one hour.

I like to keep on the rhythm of training once a day for all my pigeons. The cocks always train in the morning at about 9 o'clock . The hens come out in the afternoon between 14h and 15h and shift onto the early evening afterwards so around 18h to 19h..

I don't have any problems with the cocks and they mostly train 3 times a week for a full hour during the season, the hens also train for about 50 minutes by the end of the season and also come out 3 times a week. At the day of basketing and on the day after arrival no pigeons comes out.

I like to keep the hens quiet during the week by locking them up in an aviary during the day. They are also being fed in here after their training. .

When they go onto their resting loft in the evening there is a locker present for when they get to eager to pair up.

They can always come together at basketing and this mostly for about 10 to 15 minutes. Sometimes I also raced them without any motivation when it doesn't work out with my job but I surely didn't experience any negative influence when this happens.

Also, mostly the entire loft goes to one particular race so I don't have real problems in interrupting other pigeons. If it should happen that I have to basket 2 days on one loft then I leave them all together on Thursday and the pigeons that have to basketed on Friday don't get to see anything anymore on Friday.

After an easy race they can stay together for about 2 hours and after a hard race until the evening. 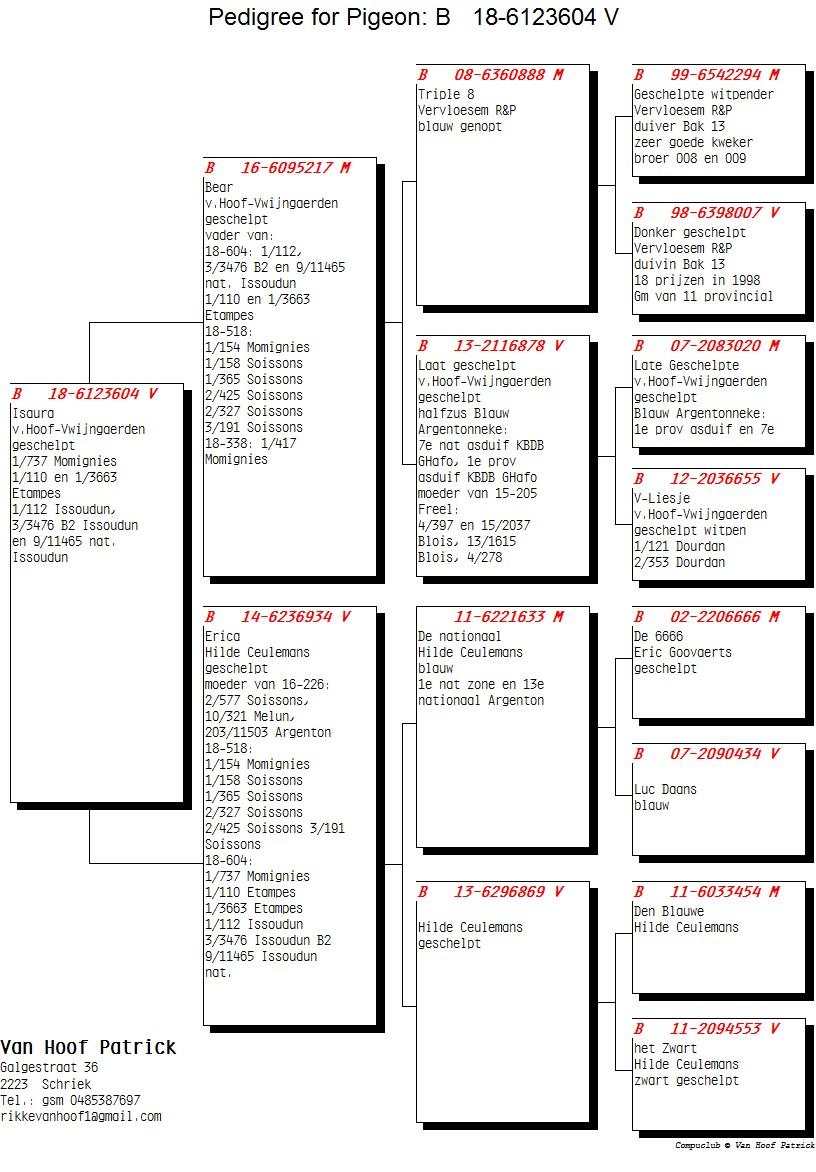 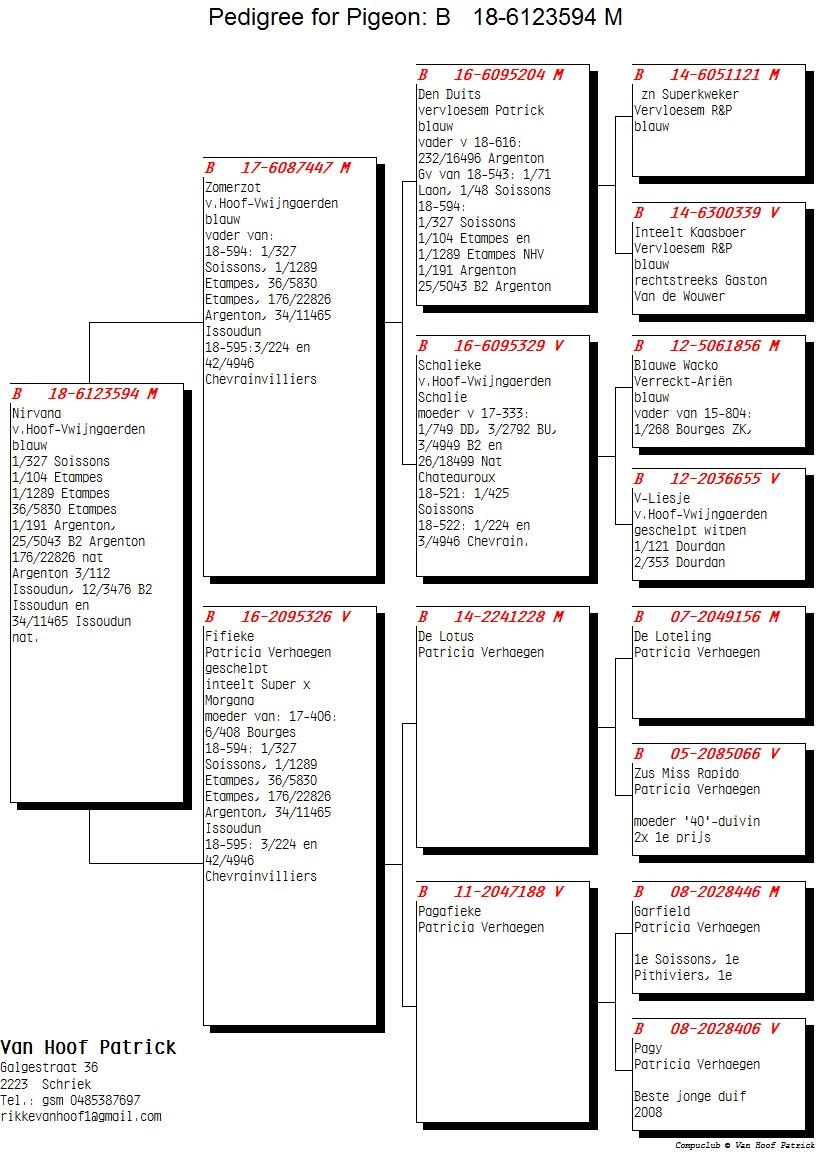 Also youngsters only train once a day, at the beginning it is in the afternoon but along the days get longer the old hens train in the evening and the youngsters go to the morning for training.

How do you motivate these youngsters  ?

I put the youngsters on the sliding doors system from the moment they have their first middle distance race (beginning of July), but the fixed rule is that the first two weeks on sliding doors they never come together before the race. I only let them from the 3rd week on and I try to do this at the day before basketing so I can basket them quietly and then can eat enough.

At arrival they can stay together without a problem until the evening and even until the day after in the morning.

Best youngster on the National races this year is : 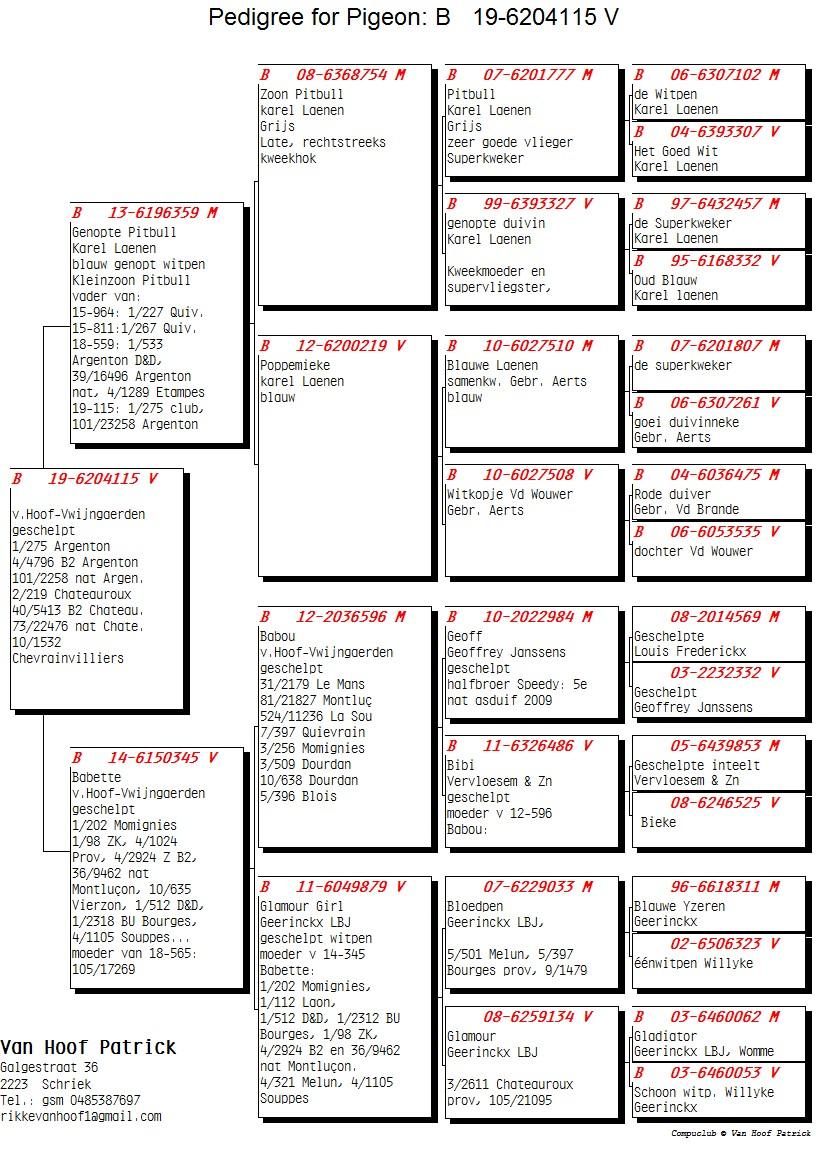 What really important is for me is that the pigeons get a fresh portion of grit Allerlei in the morning, this together with 10gr of food, in the evening I then feed them on gut feeling and can eat all they want for about 15 to 30 minutes.

What I give them as last is 1/3 candy mixture, 1/3 kemp seed and 1/3 brown perilla just before basketing. Also the youngsters are being called in with Grit Mix All kind and some candy seeds.

I found it important to purify the pigeons in Spring and get a floral conditioner so the pigeons are clean. Afterwards they get a 5 day long cure with Thricho green and Fungi from Schroeder Tollisan. In a matter of the airways I treated the cocks once during the season and the youngsters twice (one time during 3 days towards the national races and once during the national races). I always give them a yellow drop over the food or directly in the beak on Sundays against trichomoniases.

In autumn they get a cure against paratyphoid with an extra vaccination afterwards.

I use nearly everyday  Wonderpigeon for the old pigeons and they youngsters get alternating Wonderpigeon with  Avidress from Röhnfried.And they always get proteins from Brockamp Probac 1000 at arrival and on Wednesdays Probac Energy with Lecithin oil over the food.

Patrick & Kristina, a big congratulation with these top results from the entire HERBOTS TEAM