The weather isn’t in favour of the pigeon fanciers and this was also the case for the national race out of Perigueux, which normally would have a release at Saturday but the weather predictions weren’t good. Rain, rain and more rain. Luckily there was the necessary ‘flexibility’ in a matter of organisation and both the organiser ‘Belgische Verstandhouding’ as the KBDB were in favour of a release one day earlier namely on Friday as the weather would be great that day.
In total 8,562 pigeons were basketed for this national long distance race and with a strong north-eastern wind it was to expect that the fastest pigeons would be clocked in the province of West-Flanders. The fastest of all the Perigueux racers became a blue “B17-3027139” who got the name “De Perigueux” after his victory. With an average speed of 1161.71 m/m he made his Maurice Traen taste of a first national victory. “De Perigueux” is average build and of the very nervous type. We needed more than one attempt to catch him on camera. Incredible how ‘crazy’ he was of his hen.

Simplicity gives credit
When we contacted Maurice to congratulate him, his first words were “I’m just a simple fancier, pigeon sport is pure hobby for me”. And…he is right…in the garden you find pigeon lofts that have proven their servitude over the years and were many head prizes were clocked. A few top results are for example: 1st prov. Montluçon ’16 and 3rd National Limoges ’14 against 7,221b.. By the way…this is the father to the national winner on Perigueux or in other words; the apple doesn’t fall far from the tree.
The base of the Traen colony was build up with pigeons of Eric Coucke (strain Casaert-Sénéchal), Cyriel Vanpoucke and Nicolas Dobbelaere.
Who wants to race the long distance races has to have a wide racing team and that’s why Maurice comes on the start of each season with 70 widow cocks. These are being raced according the rules of the classic widowhood. Mid of March they are being coupled for the first time and after 5 days of breeding the widowhood becomes a fact. During this breeding period the widowers also do their first training races.
They train twice a day and when they get basketed they only get to see their nest dish. Their lady does wait for them at arrival and can stay together normally until the next day in the morning.
The food comes from Natural where they use the mixtures of “Finesse Light”, “Finesse Sport” and “Finesse Energy”. Aside that at arrival Belgasol (Belgica-de Weerd) and the last days before basketing Sedochol in the water. In a medical way Maurice visits vet Franky Compernolle every 2 to 3 weeks during the season for a check-up. The widow cocks were treated once against trichomoniases and once against coccidiosis. Against ‘head diseases’ nothing was given yet.

Unfortunately Maurice didn’t see the winner coming home. He was taking his clock of the middle distance race Fontenay to the club and when he got home he saw his name at the top of the results list. 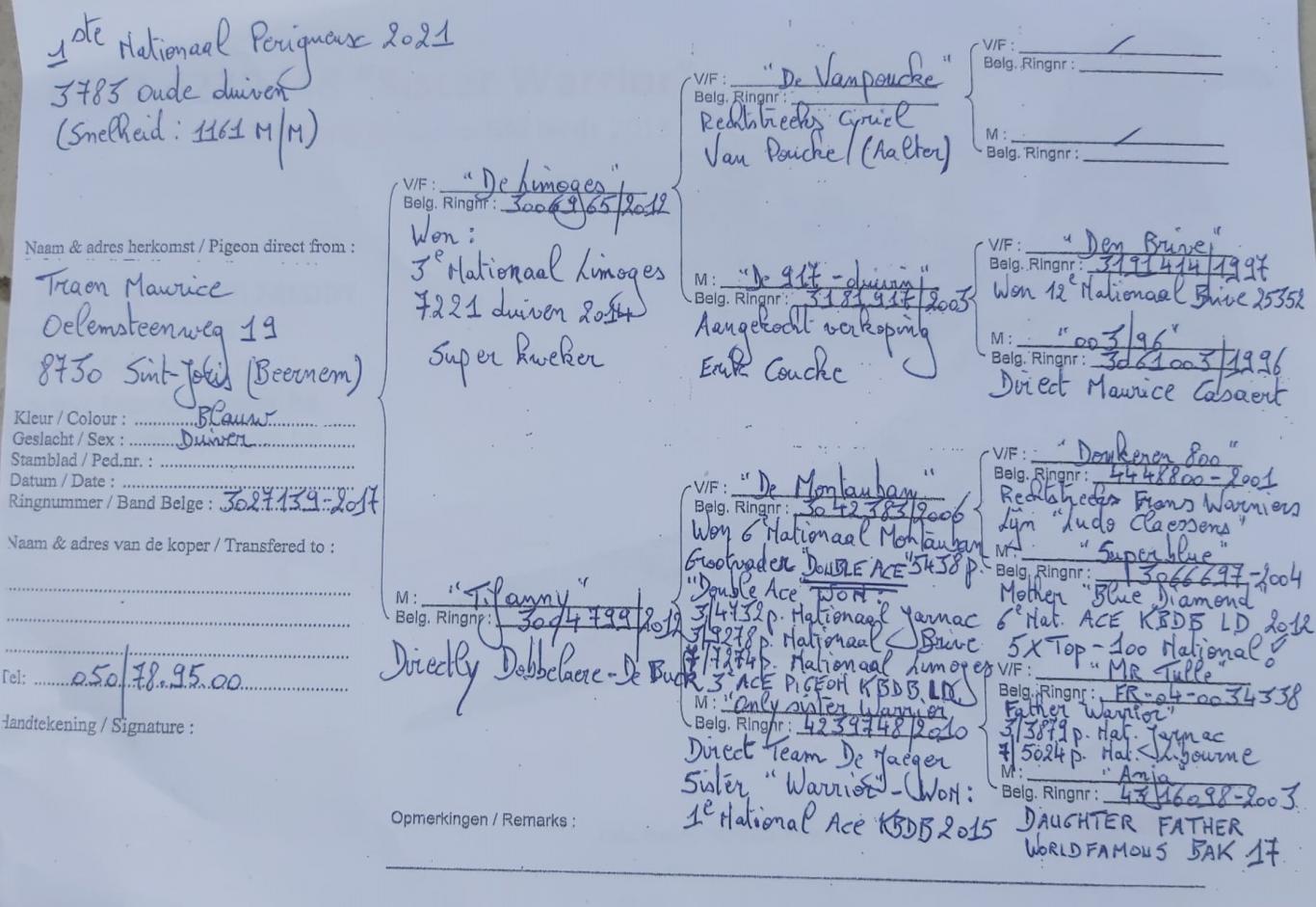