In Neerijse in Brabant we end up with Kristian Vrebos, a long distance and extreme long distance fancier in heart and soul where unfortunately only 2 fanciers are still active in this borough of Huldenberg. He learned the trade through father Jean and grandfather Victor, who were mainly active in the sprint and did an excellent job there. But Kristian's love for the heavier work started in 2004 and after years of selection we come to those few special pigeons that have been able to live up to the tough flights. In 2010 he normally became 2nd National Champion Long Distance, but unfortunately he was not classified due to a writing error, in 2011 Kristian took sporting revenge with 1st National Limoges against 19,369 pigeons. Afterwards there were provincial victories from Pau and Montelimar and he became DAL Melker in 2013.

Because the breeding lofts had to be demolished due to problems with the neighbours, fewer racing pigeons could be raced, for a while no youngsters were bred and only the old pigeons that were still there were raced. In 2020 there were 6, in the 2021 season only 2, including this 1st National Ace Pigeon Rhone Vallei KBDB 2021.

In the year 2020, Kristian took a new start and started with a large group of yearlings with little experience. That is a mistake he will not make again, youngsters will have to have experience before they become yearlings.

The first pigeons in the extreme long distance came from Chris Hebberecht, Beullens en Zoon, De Smeyter – Restiaen and Jan Delstanche. Afterwards, at the restart in 2020, I went to Stijn & Jeroen Rans, Jelle Jellema, Swinnen – Vanhove and co-breeding was done with Eddy Didden. These lines will now be extensively tested and especially on the line of my 2 best racers I will try to build a breeding loft. Both the National Ace Pigeon and the Barcelona toppers are 2 cocks with which you can go to war.

The 2020 season still on widowhood

The 2 old pigeons were simply raced on classic widowhood. They were allowed to breed for 5 days in April and afterwards they flew a few shorter flights before flying Bourges National at the end of May. After that, everything was dominated by the Rhone Valley, which they flew every 3 weeks with complete rest in between the flights.

The winning ace pigeon was not really a quiet pigeon in the loft, the performances were good, but I thought he had even more to offer. When the yearling cocks came to this loft, he took another box and there was exactly more life in the loft. Because of this he performed much better and this pigeon was very calm. A pigeon should like to sit in your loft and be motivated. That was already the case with this clapper in 2021.

The pigeons train once a day, the widowers around 3 pm and the hens an hour later.

The group of yearlings

The yearlings flew in total widowhood and due to their little experience, many were lost, so the approach will be adjusted in 2022.So I let them gain experience with several sprint races, middle distance races and national races with the final destination of Souillac. The pigeons that could handle this rhythm were allowed to stay and now have to prove them.

For the 2022 season it will be decided to race everything on a nest in the front loft and at the back of the garden they will race on ordinary widowhood. The yearlings race Vierzon, rest week, Argenton National and will be coupled the following week. The goal is to basket them every 10 to 12 days of brooding and I want them to take 2 flights as an exam.

Young pigeons were not lit or darkened here and look much better this year than last year. This year for the first time a group of youngsters was darkened for 1 month (1 March to 1 April) to see how long I can still race them. The cause of last season was moldy bean straw that caused many sick pigeons in the loft. Honesty trumps, but now they just sit on a loose floor and are much healthier. They just sit together and the goal is to participate in the first 2 national flights with them and then put them on rest. The selection will then have happened after 8-9 flights. If they have such experience, I want to race several long distance races with the yearlings next season so that they already have 2-year-olds towards the extreme long distance.

2 best pigeons from the Vrebos Loft 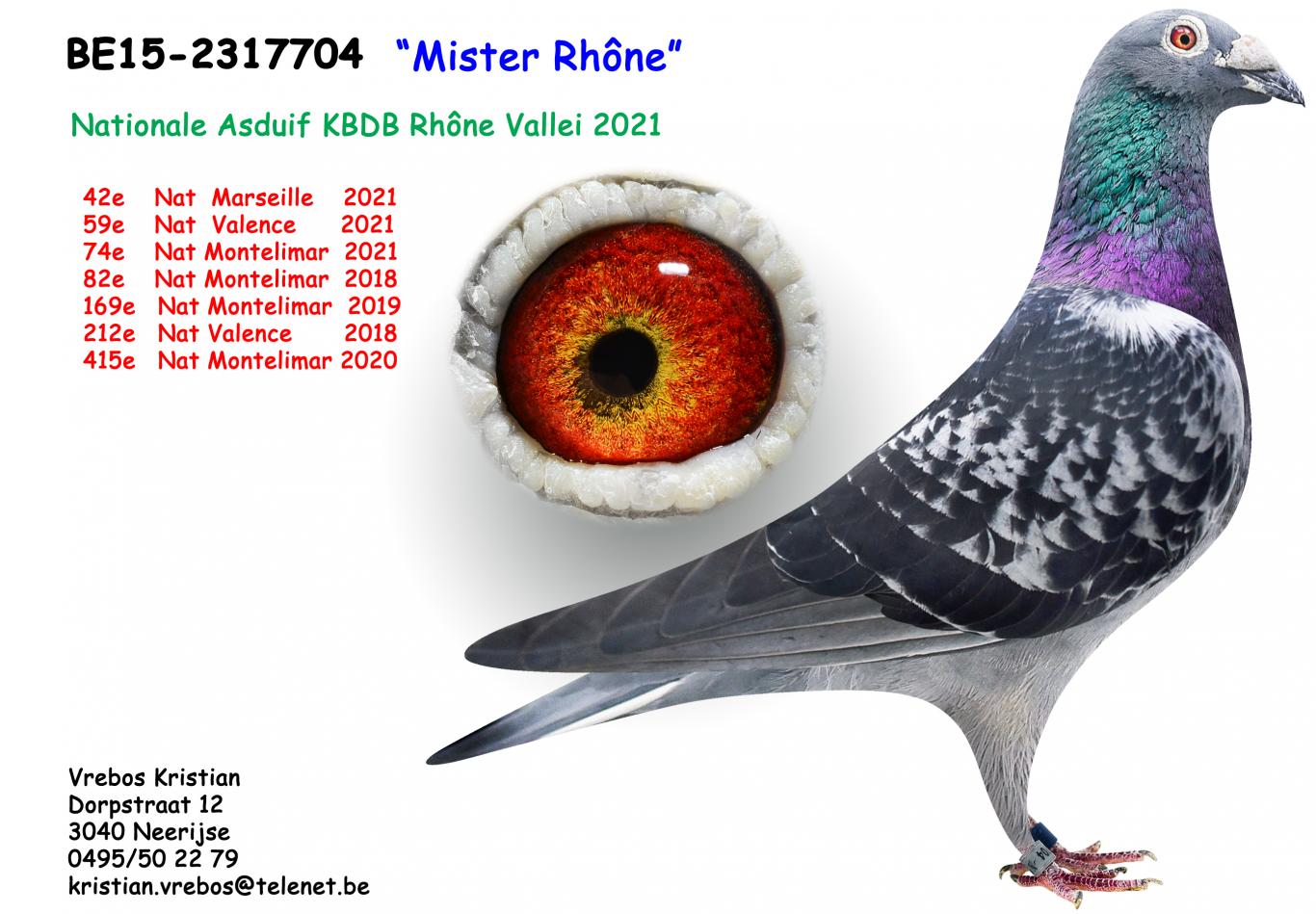 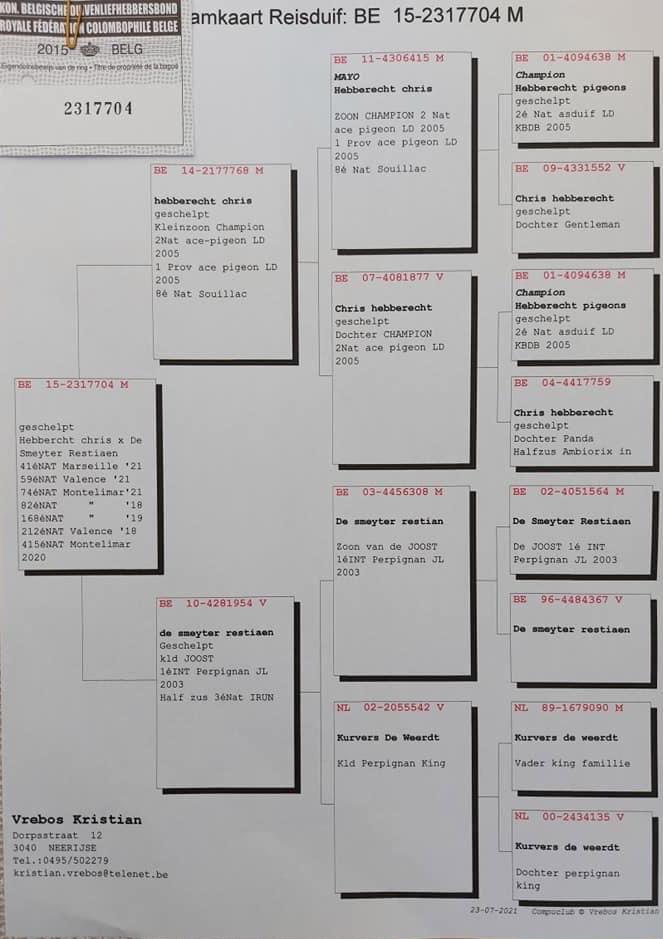 The pigeons here always get mixtures of Beyers Galaxy mixtures and in the season itself this is a full bowl of sports mixture every day and the last 2 days before an important race I give a mixture rich in fat. I like natural products to give to the pigeons, so elderberry syrup, beetroot juice and sedochol are never far away.

For the medical story we can be brief. The racing pigeons are normally given a trichopil every 3 weeks, this 2022 season I have already been checked twice by Raf Herbots and there was nothing wrong. To date, nothing has been done for either tricho or the respiratory tract. The lofts are bone dry and I have little trouble with respiratory problems. In the autumn everything is cured against paratyphus and there is also a vaccination for all pigeons.

Kristian, congratulations on this ace pigeon title from the entire HERBOTS TEAM.