Gerard Koopman (Ermerveen) ... the unique power of a unique strain of winning birds 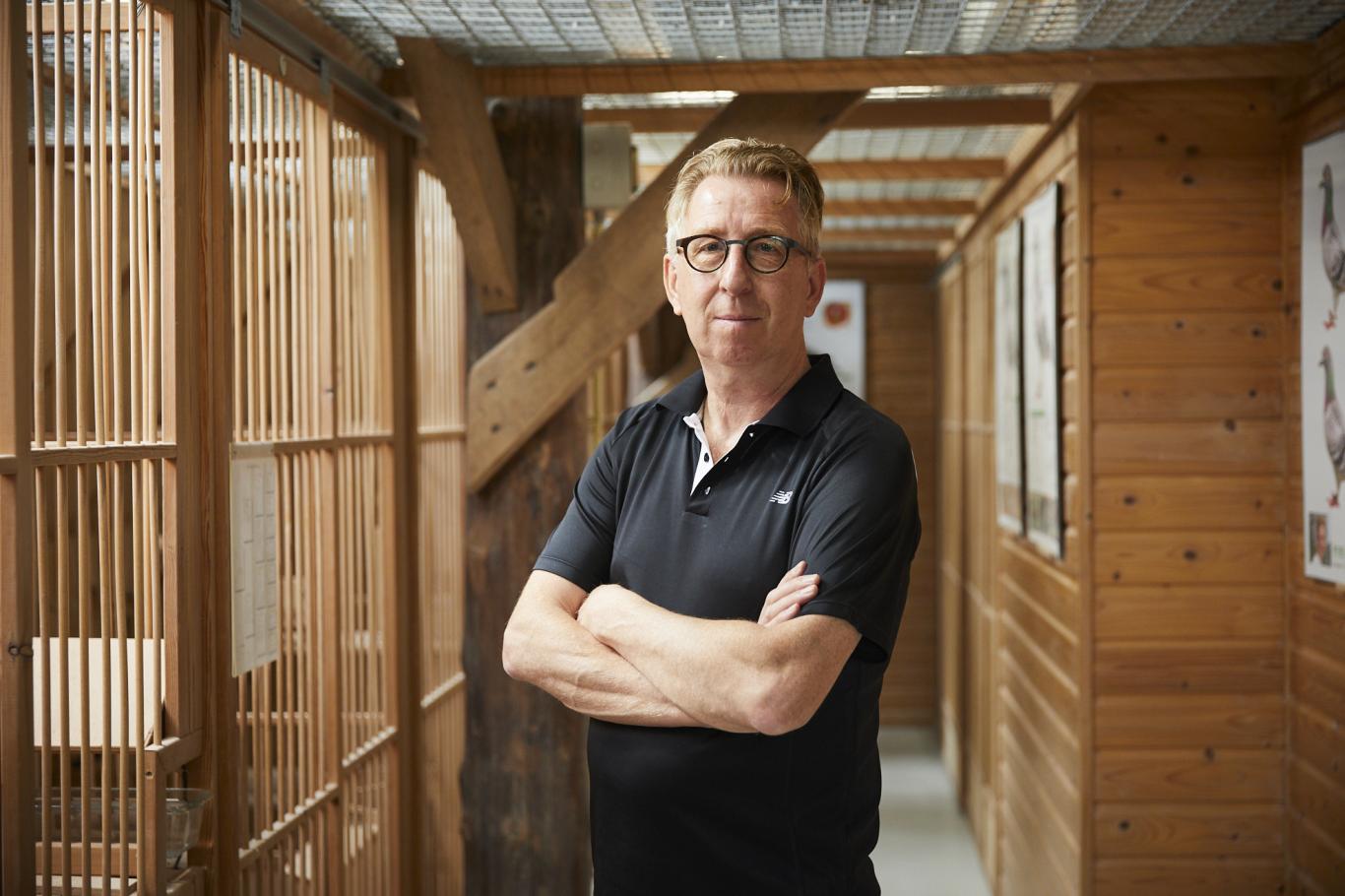 When speaking with Gerard about his base, it is very striking how respectfully he speaks about the late Jules Rijckaert (St. Amandsberg) and the late Louis Van Loon (Poppel). Gerard had a very special click with Louis. So good, in fact, that he dares to call him his teacher without hesitation. Louis Van Loon, modest as a human being, did not blow his trumpet, but everything he said was well thought out and based on years of experience. The master from Poppel always stayed close to the basic principles that were very important in his eyes. No highfalutin theories. For example, he never showed a result, not even when he showed the competitors all corners of the room. Much of that good advice has resurfaced in recent years. Most of it is about simple things. But they have to be done well. Often it only dawned years later what Louis' statements really meant.

One of the most spectacular breeding couples the pigeon sport has known so far, namely "Gentil" x "Golden Lady", is a creation of grand master Gerard. Olympiad pigeon 'Gentil', a Janssen-van Loon cock formed together with 'Golden Lady', a daughter of the 'Cannibal' of Dirk and Louis Van Dyck, a pair which until today has been of enormous influence. With Gerard himself, but not least with a range of top fanciers who reaped the benefits. Still the best pigeons in Ermerveen are related to that famous couple.
"Gentil" is a son of "Eric" (3x 1st in big combine), in turn a son of "Raket 84" x "van Loon 112". And "Raket 84" is a son of the "Jonge Raket van '76" of Gebr. Janssen who won no less than 15 first prizes. The mother of "Gentil" is a daughter of the "Zitter" x "van Loon 314". The "Zitter" has as mother the "Gouden Duifje" (also mother of the "Beatrixdoffer") , a daughter of the "Goed duifje van 72" (Daughter "Jonge Merckx"). An hen that won several first prizes in Arendonk. And also grandmother of the 'Jonge Raket van '76'. The hen of the basic breeding pair is 'Golden Lady', a direct daughter of the 'Cannibal' of Dirk and Louis Van Dyck, a phenomenon in middle-distance and 1st national ace ½ long distance. K.B.D.B. in 1996. And in his turn a son of 'Rambo' with 3 x 1st Semi Fond in Union Antwerpen.

Also thanks to many other fanciers
Gerard also wants to thank numerous other fanciers who have sold him so much quality. Gerard explains: "The problem is that this list has become so long over the course of 15 years that I am afraid of forgetting someone. I apologise for not mentioning the other fanciers by name but I will mention the story of "Super Rik". During a visit to Belgium, I asked Rik Hermans if he knew a good pigeon somewhere. Rik mentioned the pigeon of Herman van Sande who won that year two provincials and I went to see him. I liked the pigeon and also the good family appeared to be present. It became an exceptional breeder.”

The lesson of this story is that very good racers are not always sufficient in the first line for breeding. But that the children and grandchildren can be fantastic breeders. The advice of Louis van Loon at the time was to always place two children of real cracks directly on the breeding loft.

3rd place National championship NPO.
The marathon pigeons also did splendidly and were rewarded with the 3rd place in the NPO marathon loft championship category.

5th and 9th ace bird national competition  WHZB 2021
"Akira" became 5th Ace pigeon of WHZB in the category long distance 2021. Besides that "Maura" became 9th in this category. Two pigeons in the top 10! The Koopman team is more than satisfied with this result!

Toppers to be super proud of:

When we ask Gerard which are his four current favourites, he doesn't have to hesitate too long to mention the following names. We have to say that he hesitated a long time to include "Adora" in the list. 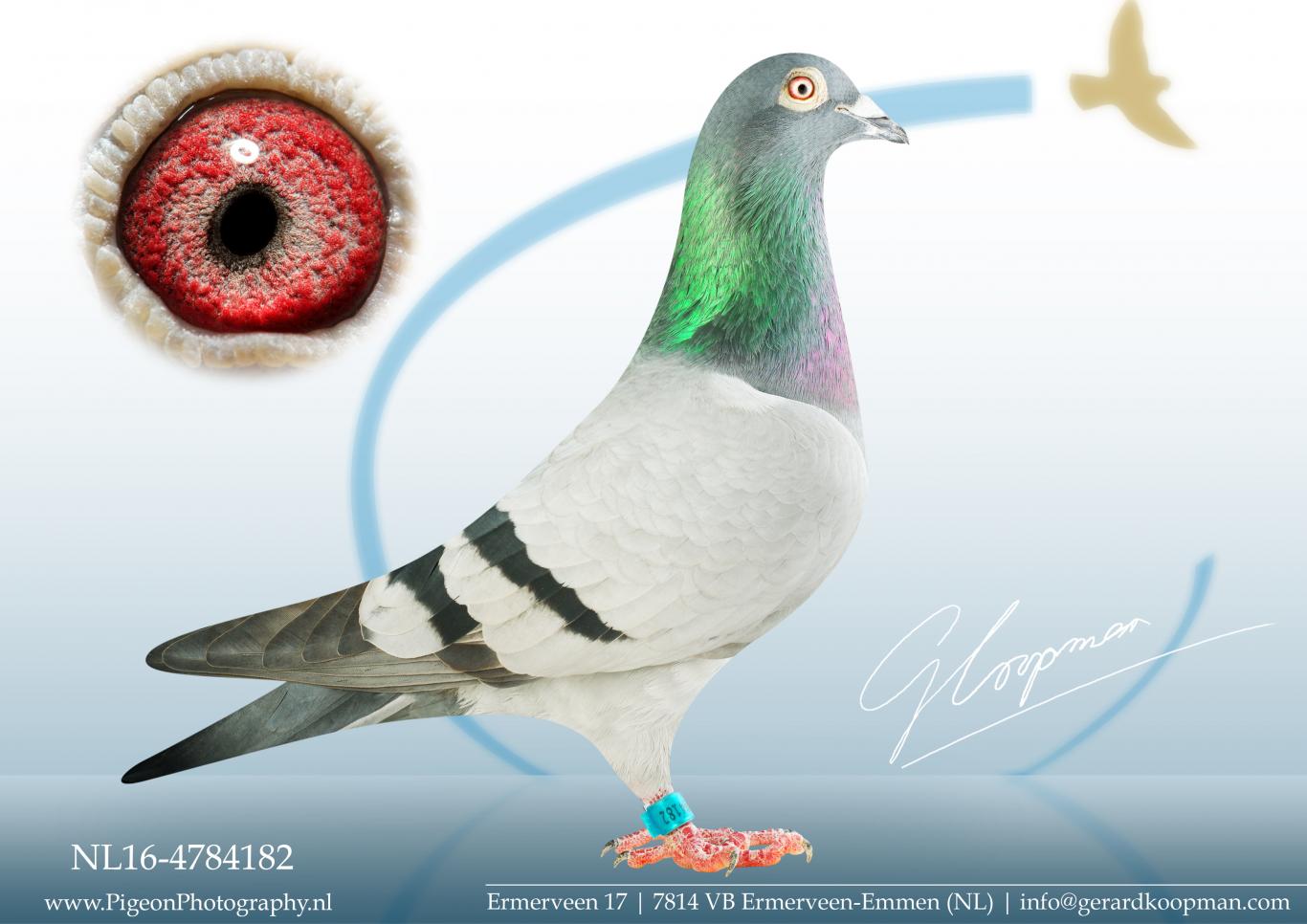 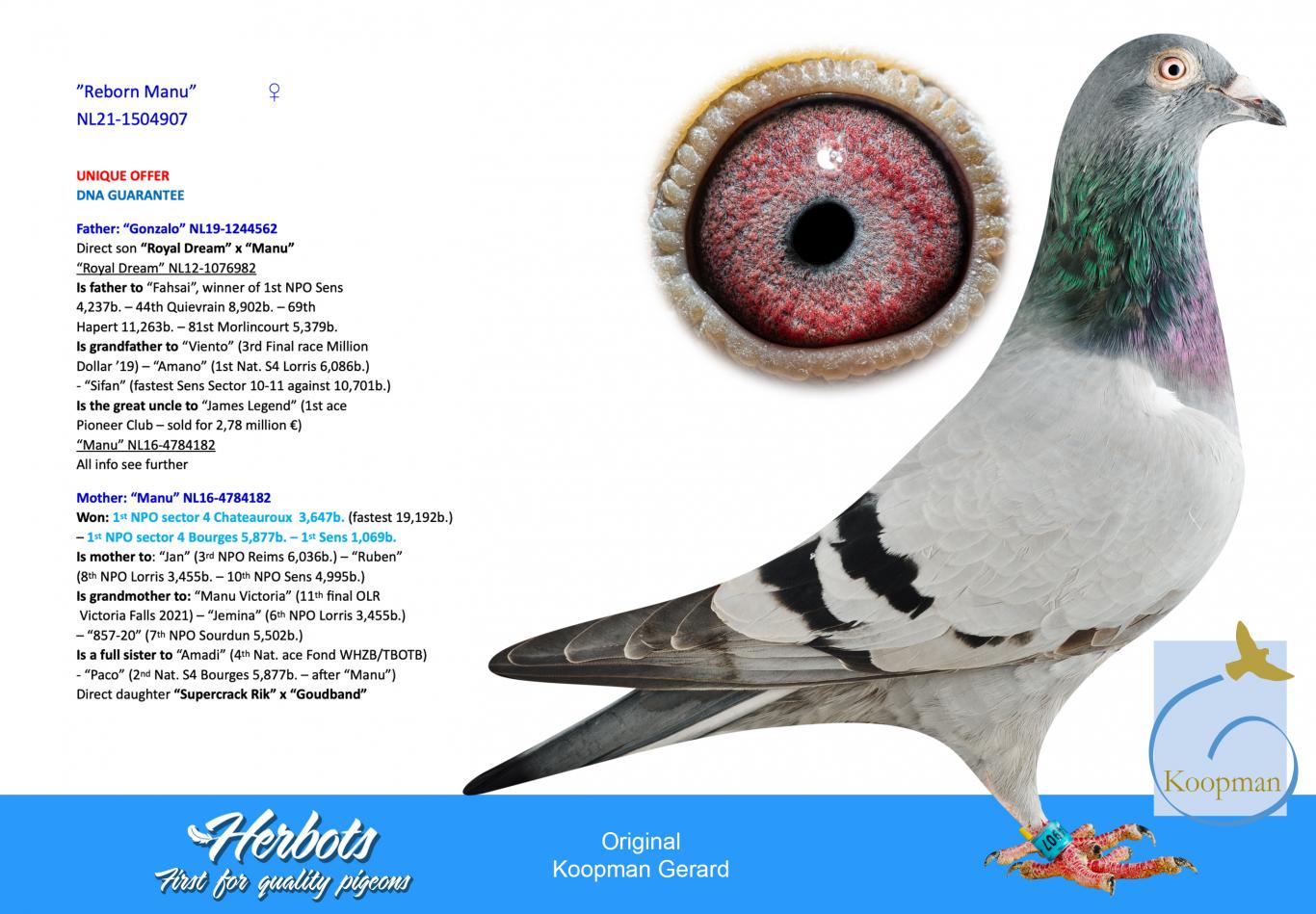 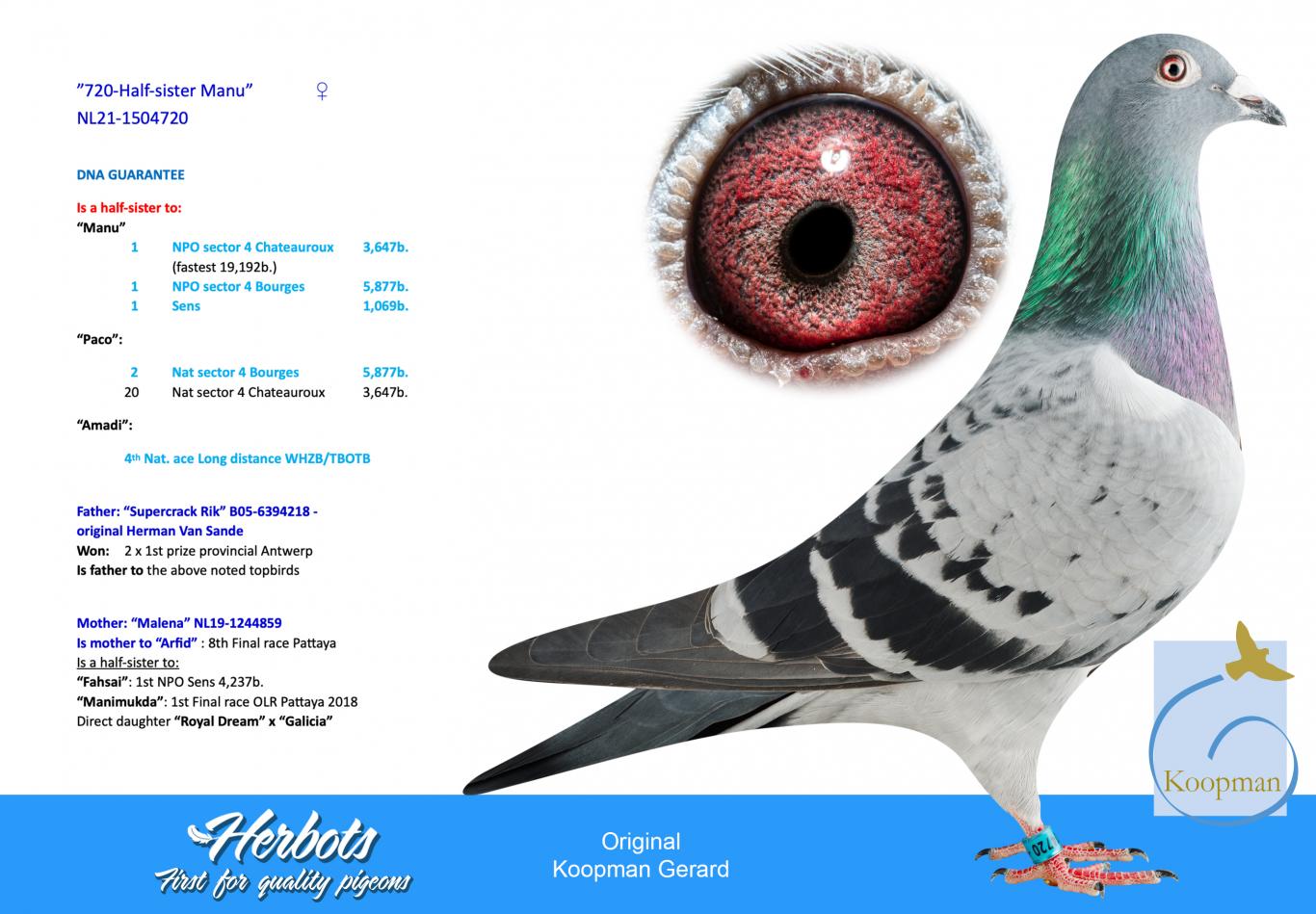 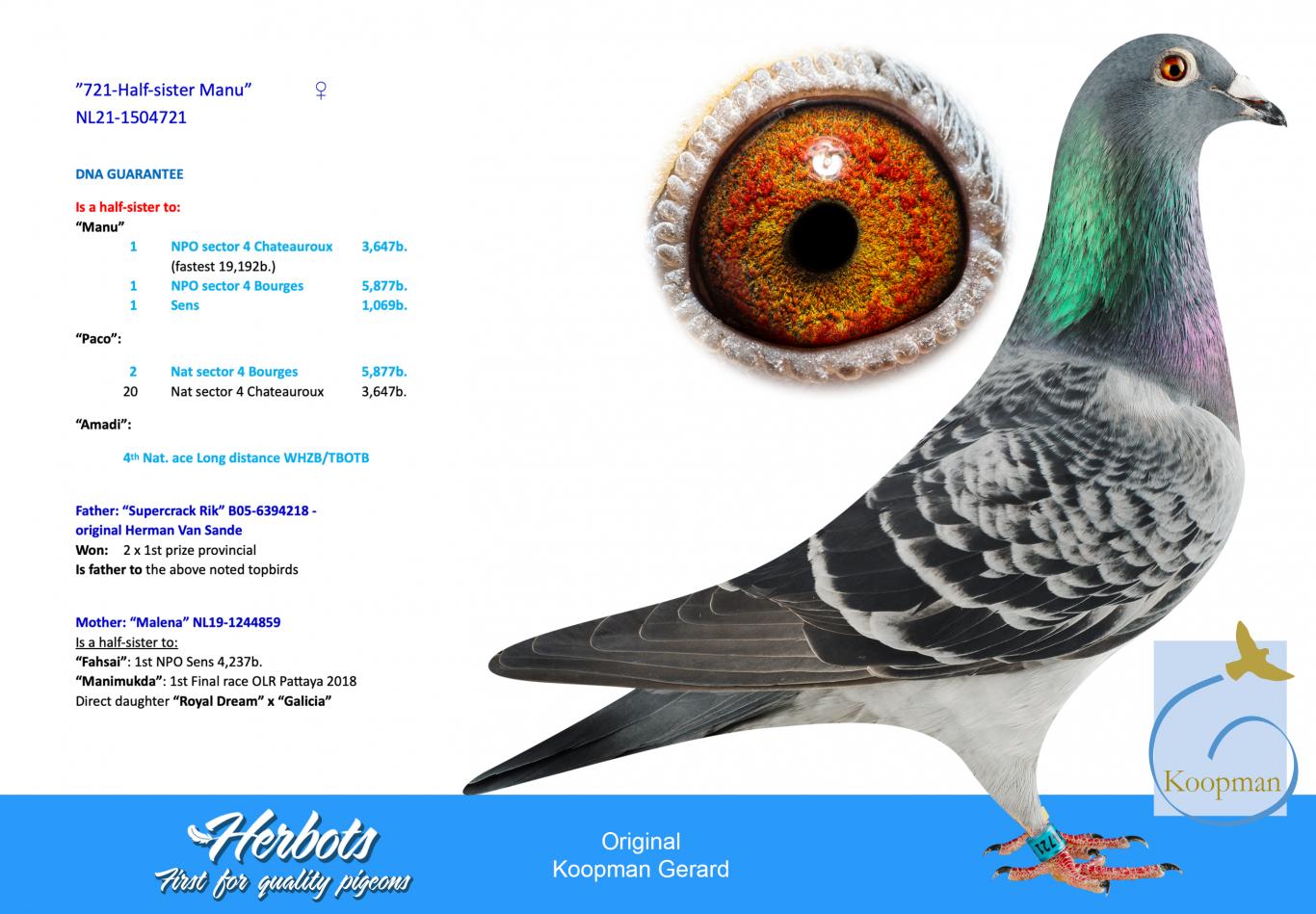 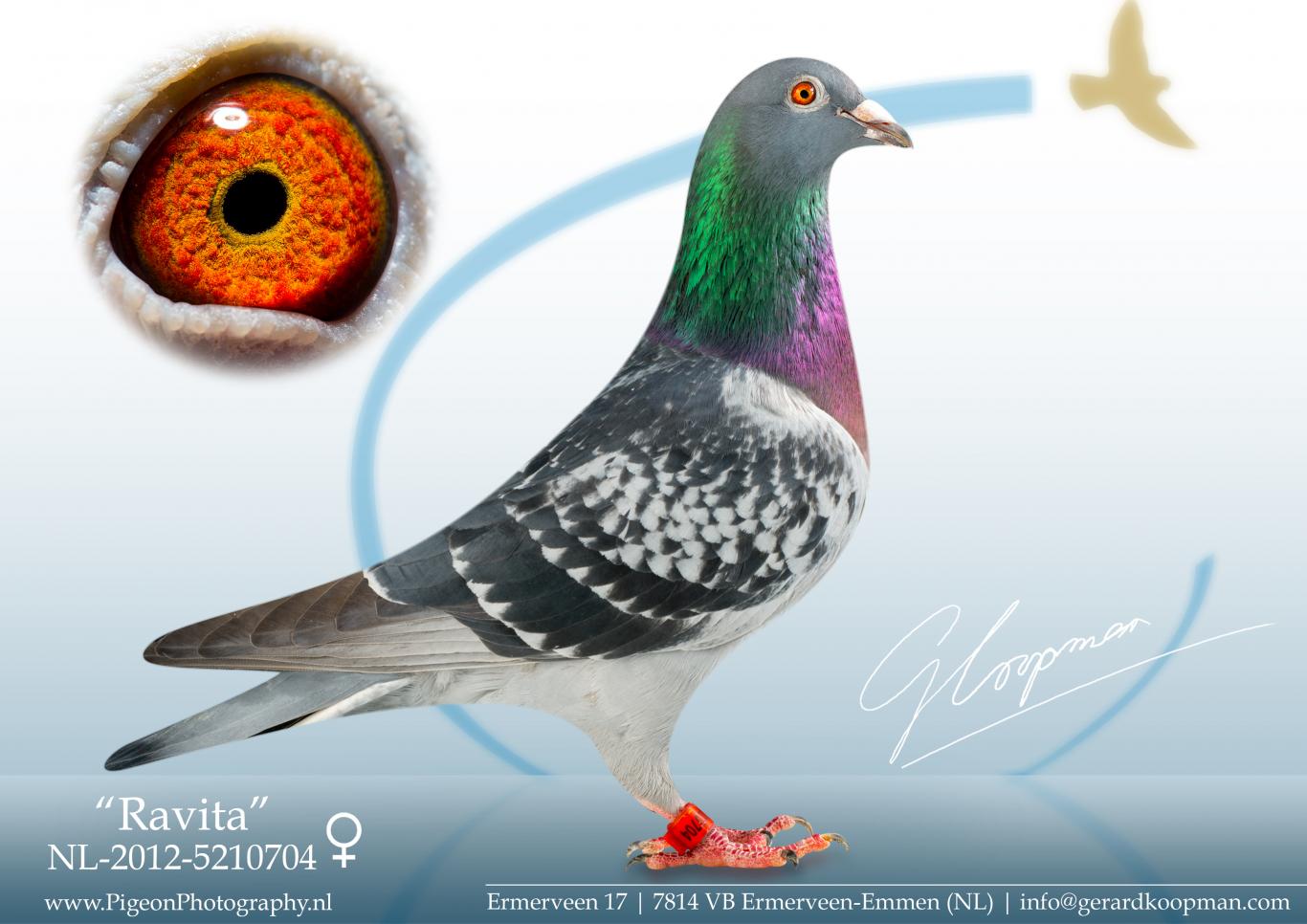 At the moment 1 daughter and 1 son from "Ravita" are offered in internet auction Pigeon Bids. Given the age of "Ravita" do not hesitate to act now! 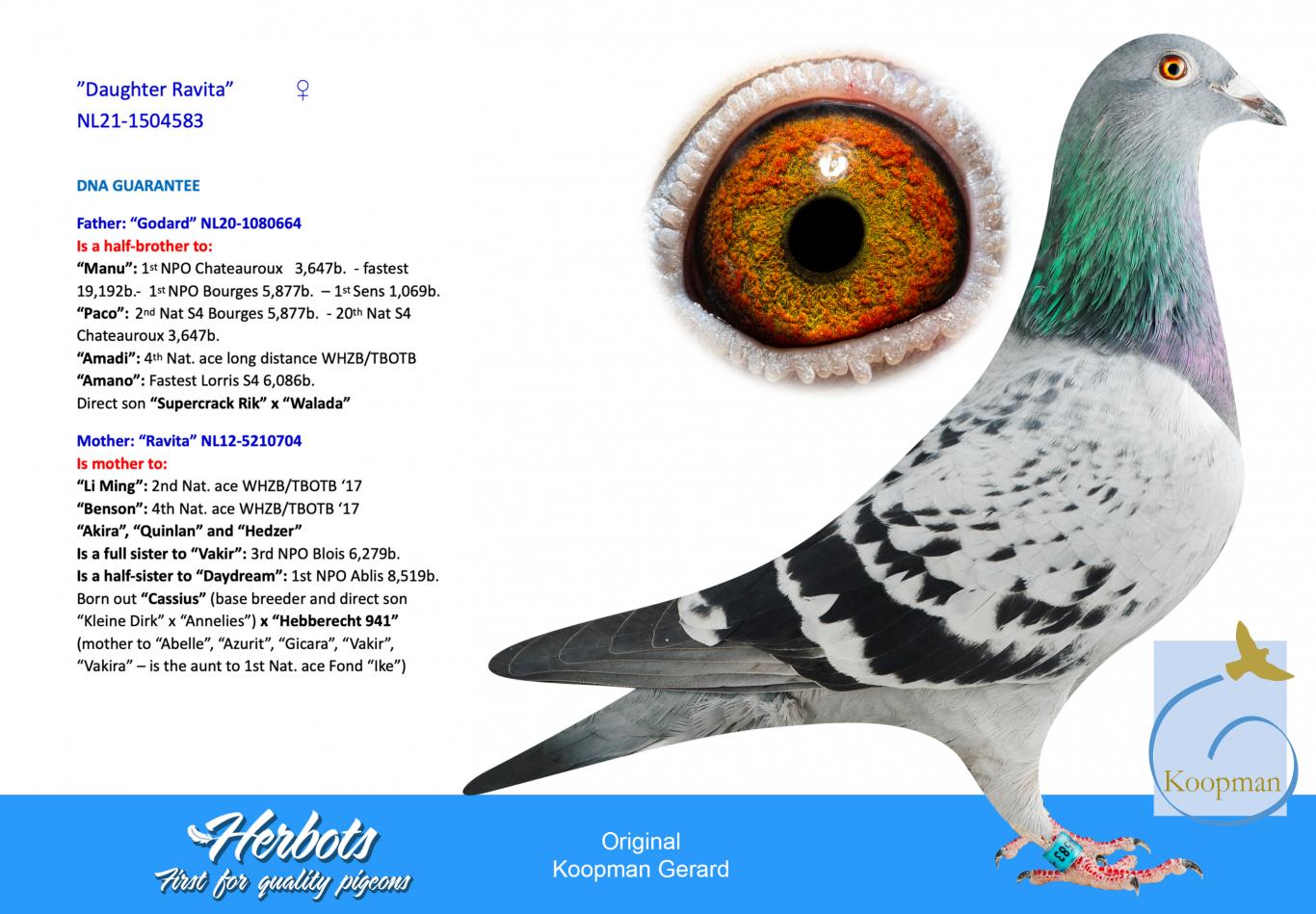 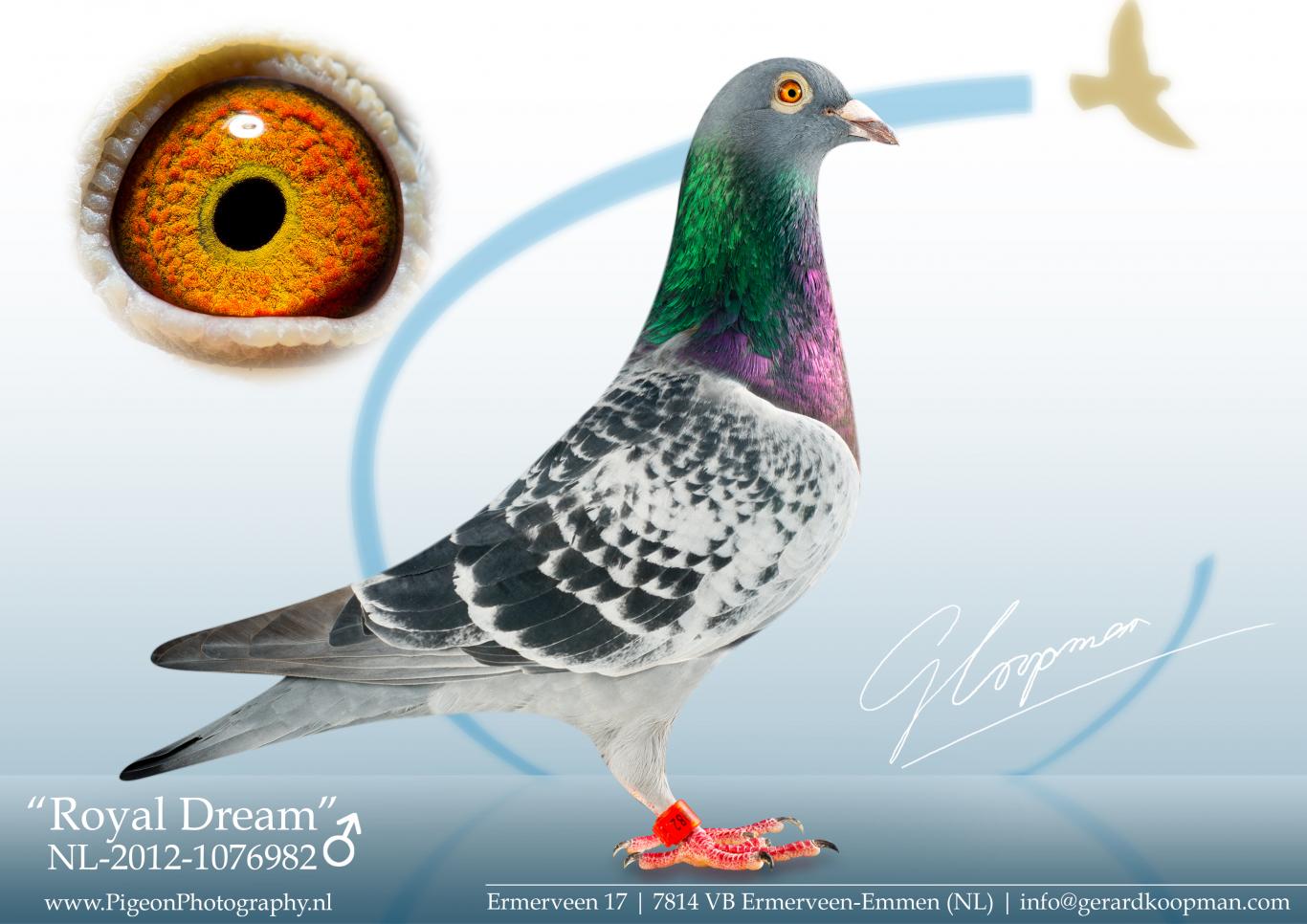 The father of "Royal Dream" is "Cassius" out of "Kleine Dirk" x "Annelies" . Remarkable is that also Manu's mother "Goudband" is a daughter of "Cassius".

At the moment 1 daughter and 1 son from "Royal Dream" are offered in internet auction Pigeon Bids. Given the age of "Royal Dream" do not hesitate to act now! 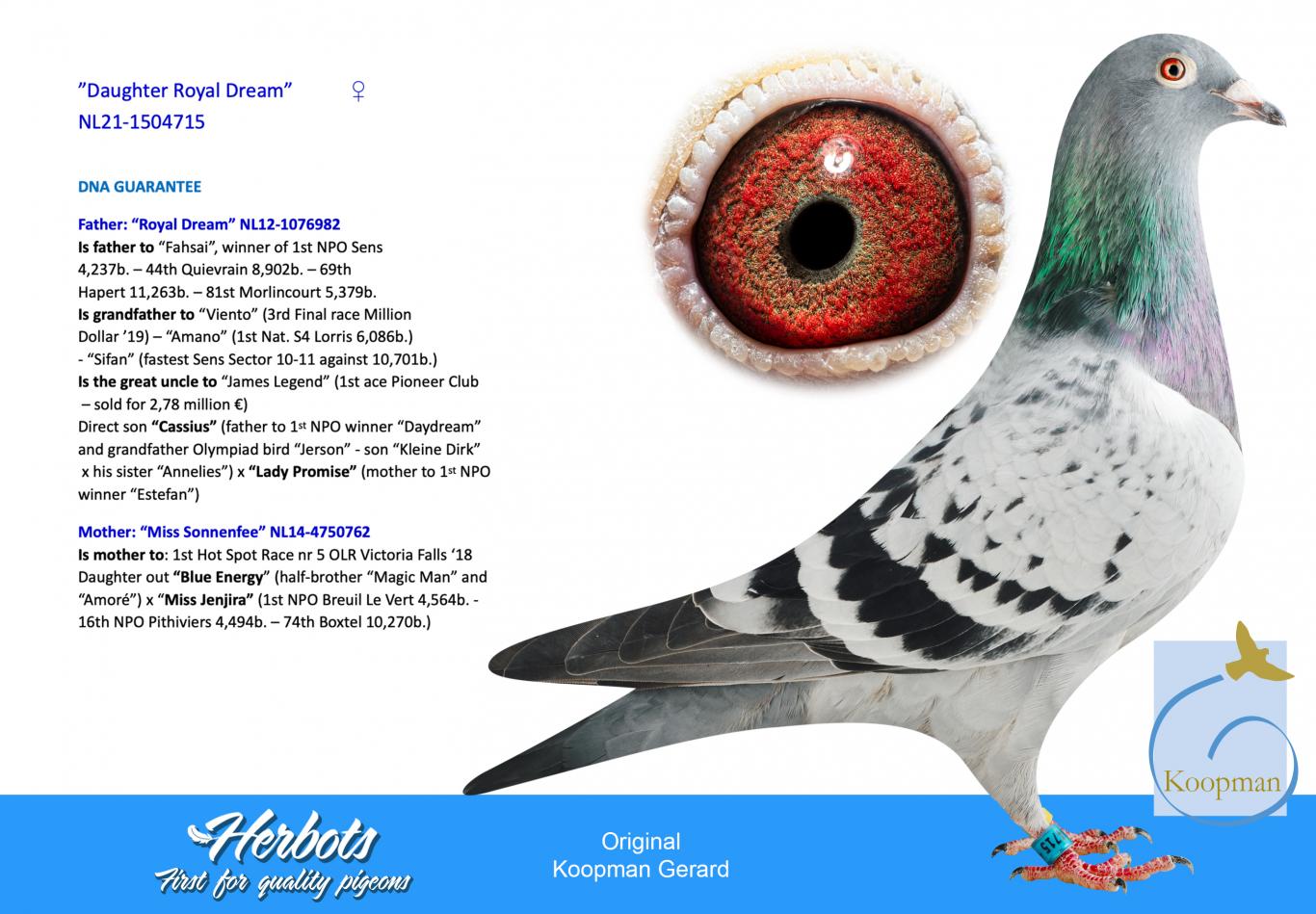 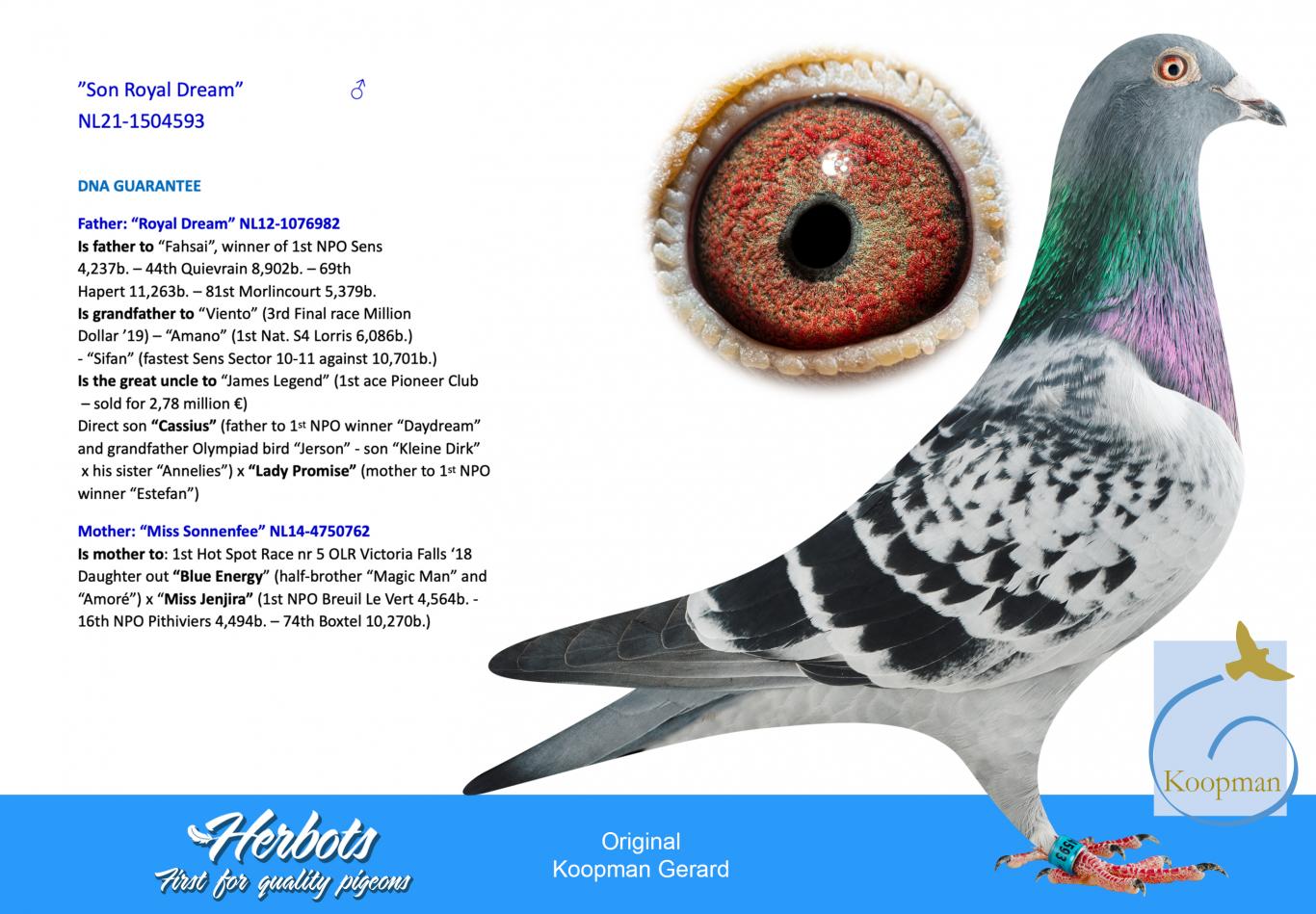 At the moment a son and a daughter are offered from the father of "Sifan", namely "Bento". 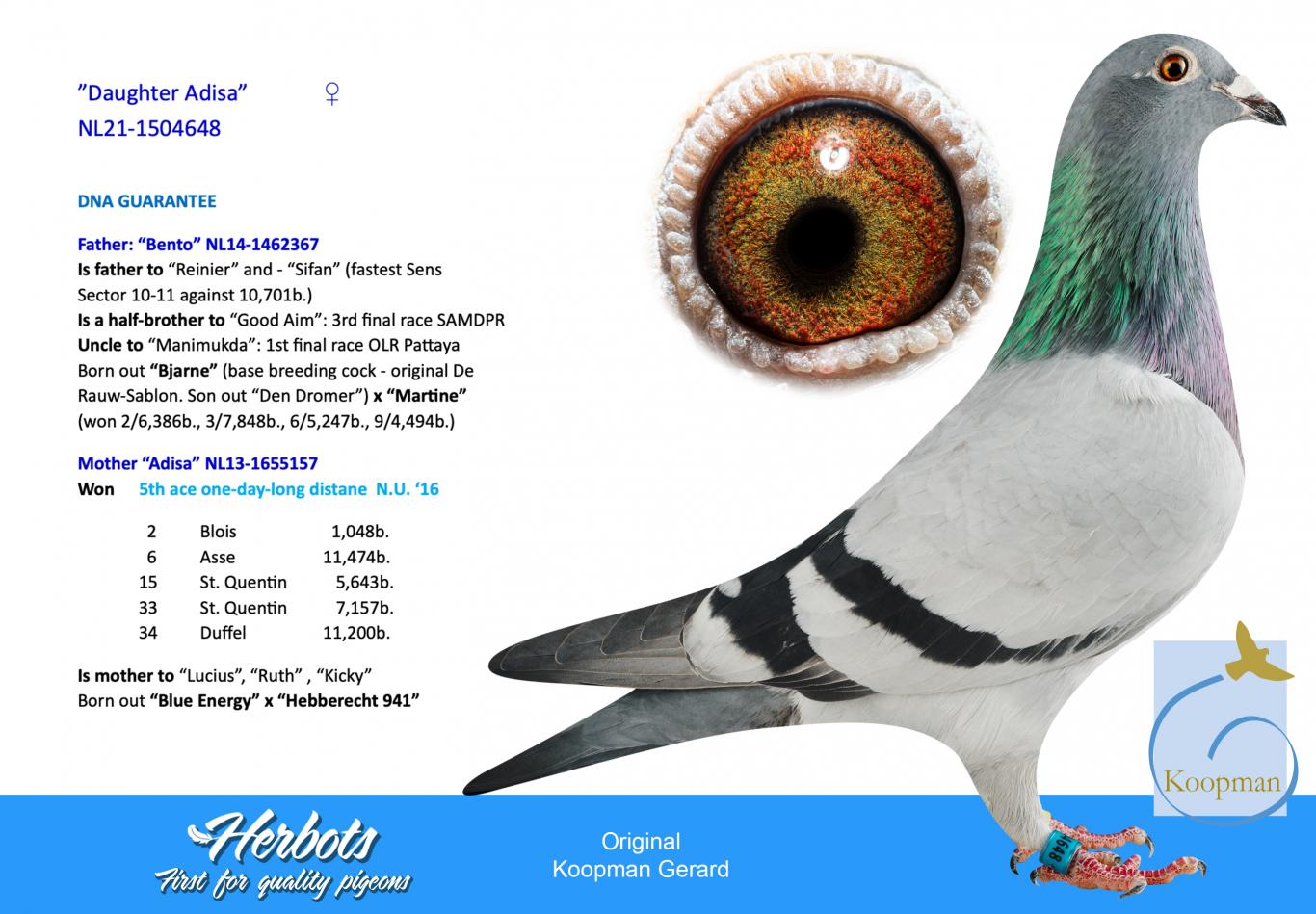 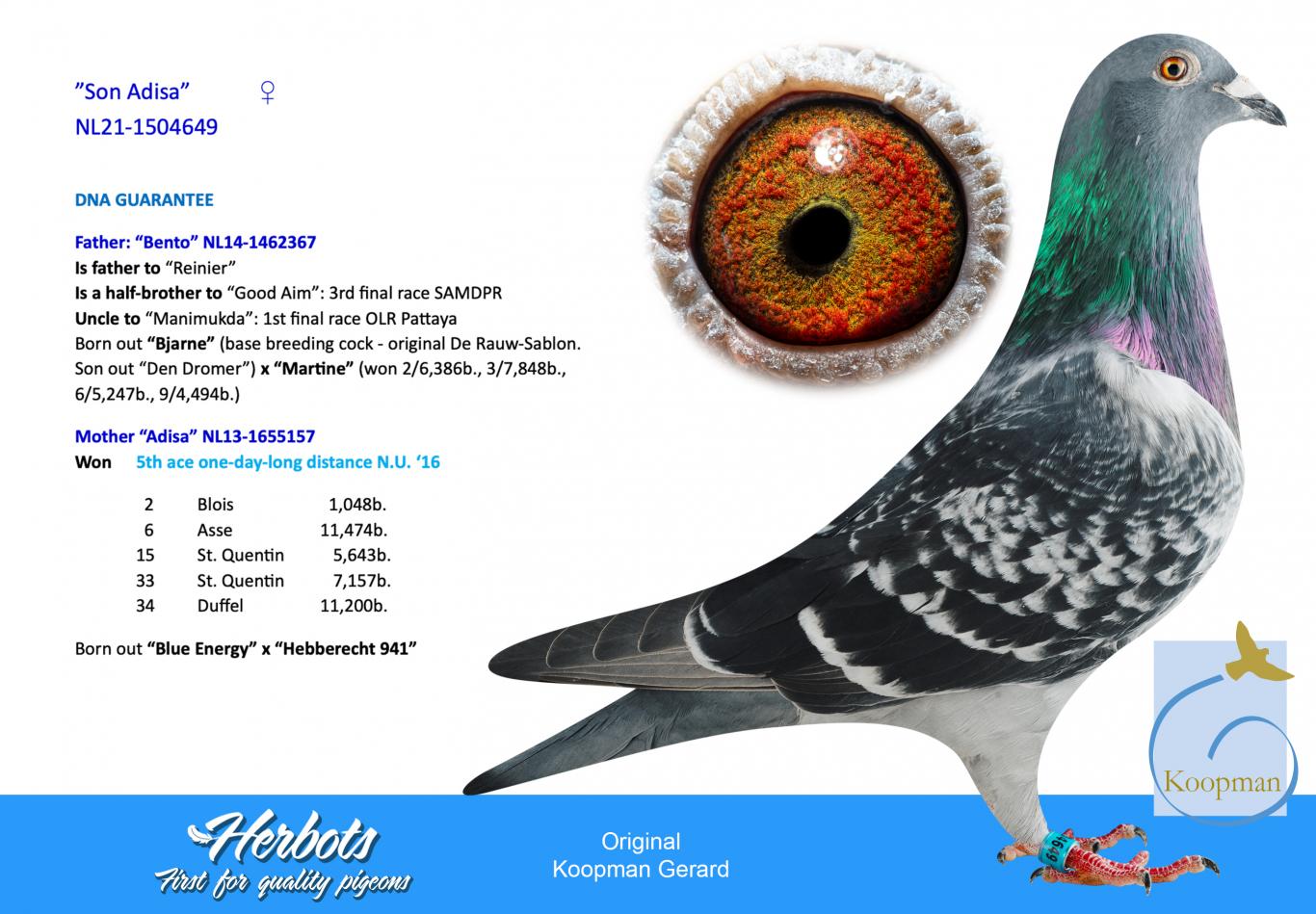