Who thought that the colony from Frans & Gert Rondags only existed out of short distance racers is wrong. They both like to race the different races but as they carry out their hobby with true passion and especially like to see them to get home. With a pigeon on 100km this is off course nice but Frans admits honestly that the season of 2020 gave him a few really nice moments on the national races and he might would like to have a go in winning such a national race.

Power to the hens on the National races.

He races the nationals mostly with hens alone who get the same preparation as the other pigeons and also remain at the same loft. The system has to work and the fancier will have the feeling of the feeding under control.

That’s why more than one hen showed themselves on the national races in 2020 and we gladly like to introduce them to you.

This hen won 1st National (z) Chateauroux and won 7th National against 2,721 old birds on the last race of the season. Especially the coming out of the mass is the thing to do here seen the location against the mass at the other side of the country. This hens also won the 1st prize on the short distance races and shows again that the all-round class is present in these pigeons. 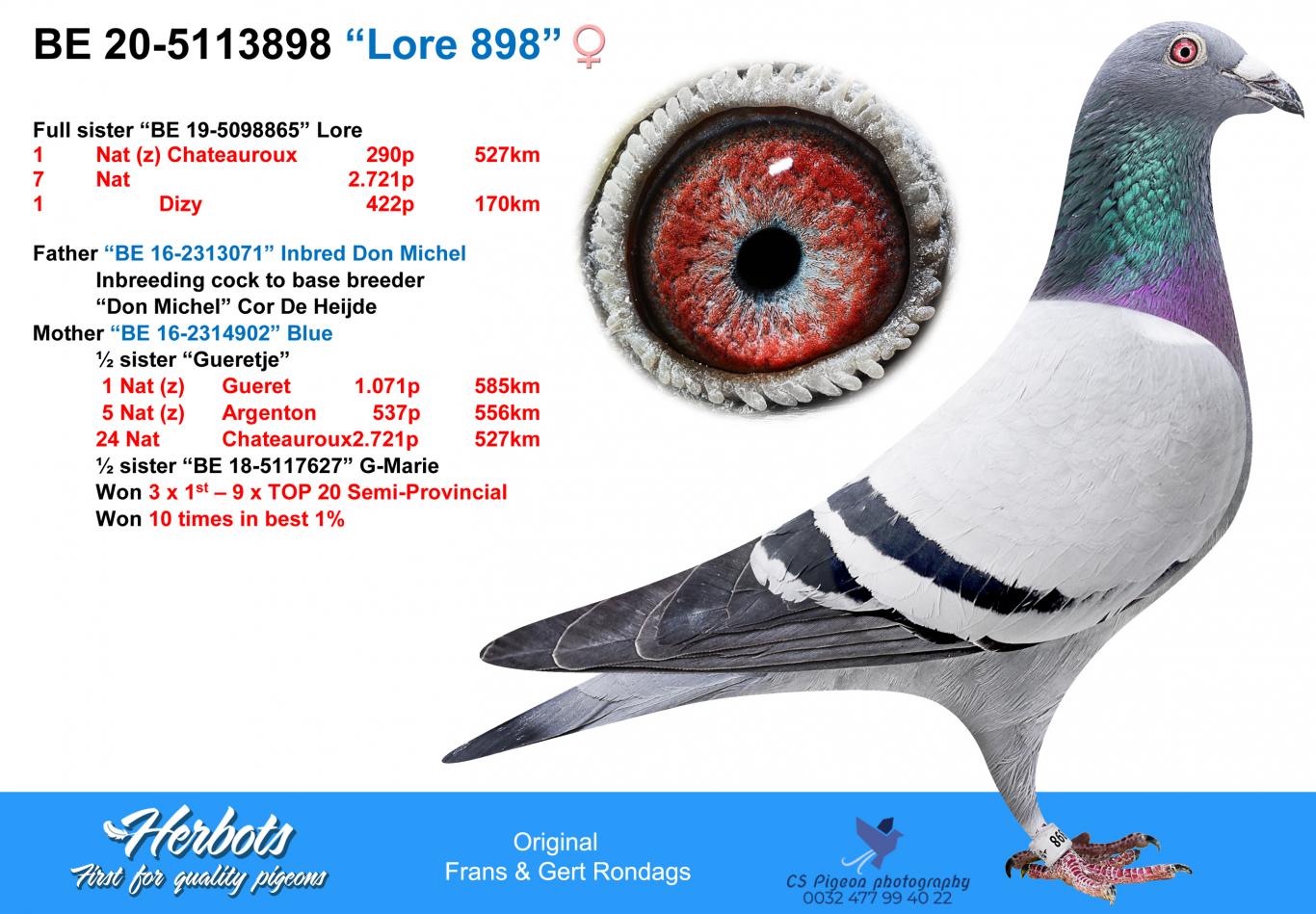 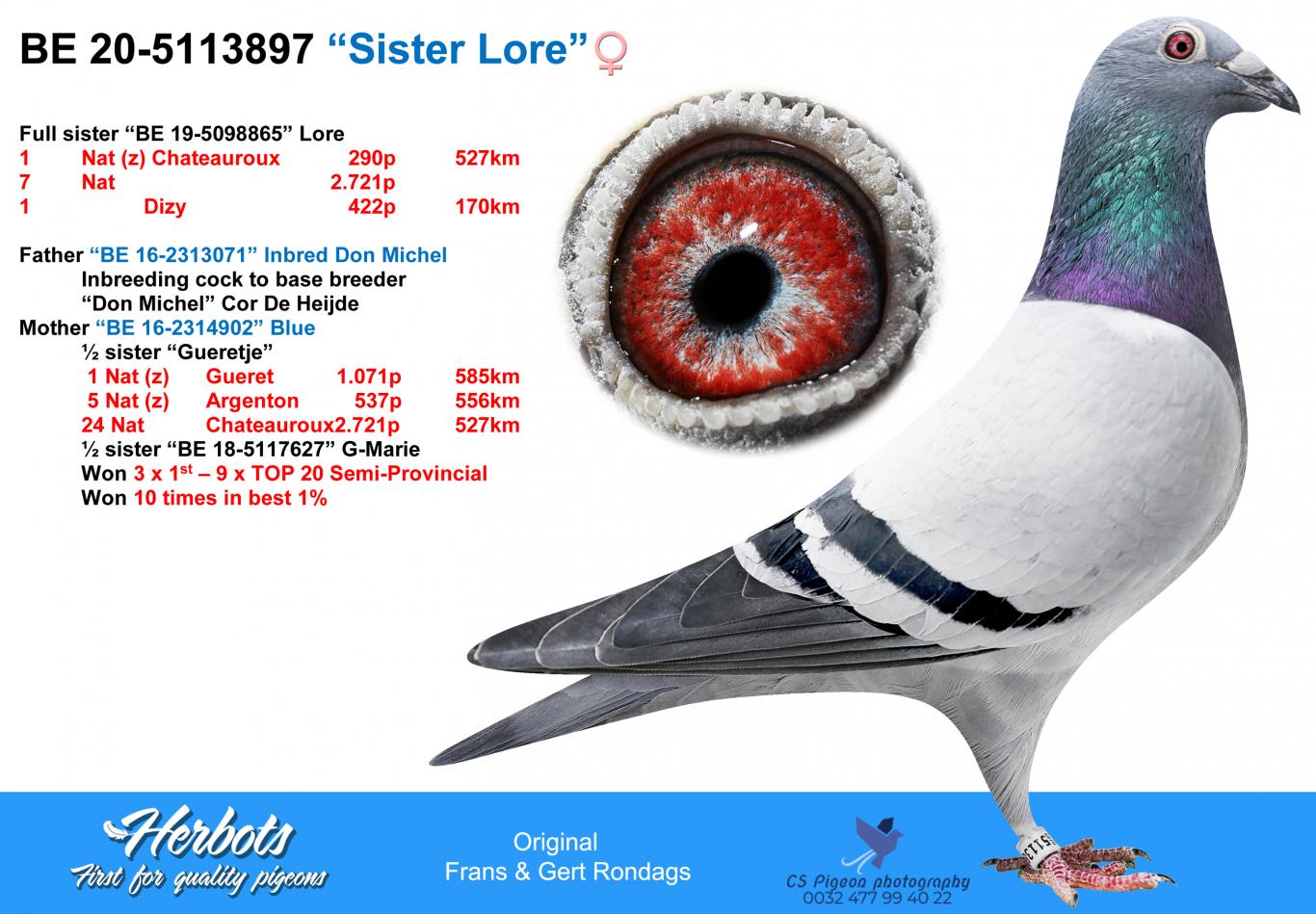 During the season this hen was already extra ordinary on the national races and was truly the best hen at the Rondags’ place on the longer distances. She won 1st National (z) Gueret 1,071 yearlings, 5th National (z) Argenton 537 yearlings and ended the season with the 24th National Chateauroux 2,721 old and yearling birds together. In short, a super hen that will have to race a lot of kilometres in 2021 to give even more brilliance to her palmaris.

Mother “BE 15-4236234” Daughter G-Power ( A & G Vanrenterghem )
Best breeding hen on the loft for the national races
Also mother to “G-Marie” who was old in the first auction and shined on the shorter races until 340km with 3x 1st and 10 x per 100.
Daughter to “Brother 1st National Gueret” x “Sister 1st Nat (z) Tulle 2,572b”
In this hen you can find a lot of Gaby Vandenabeele blood and comes out of the very best of the colony from A & G Vanrenterghem 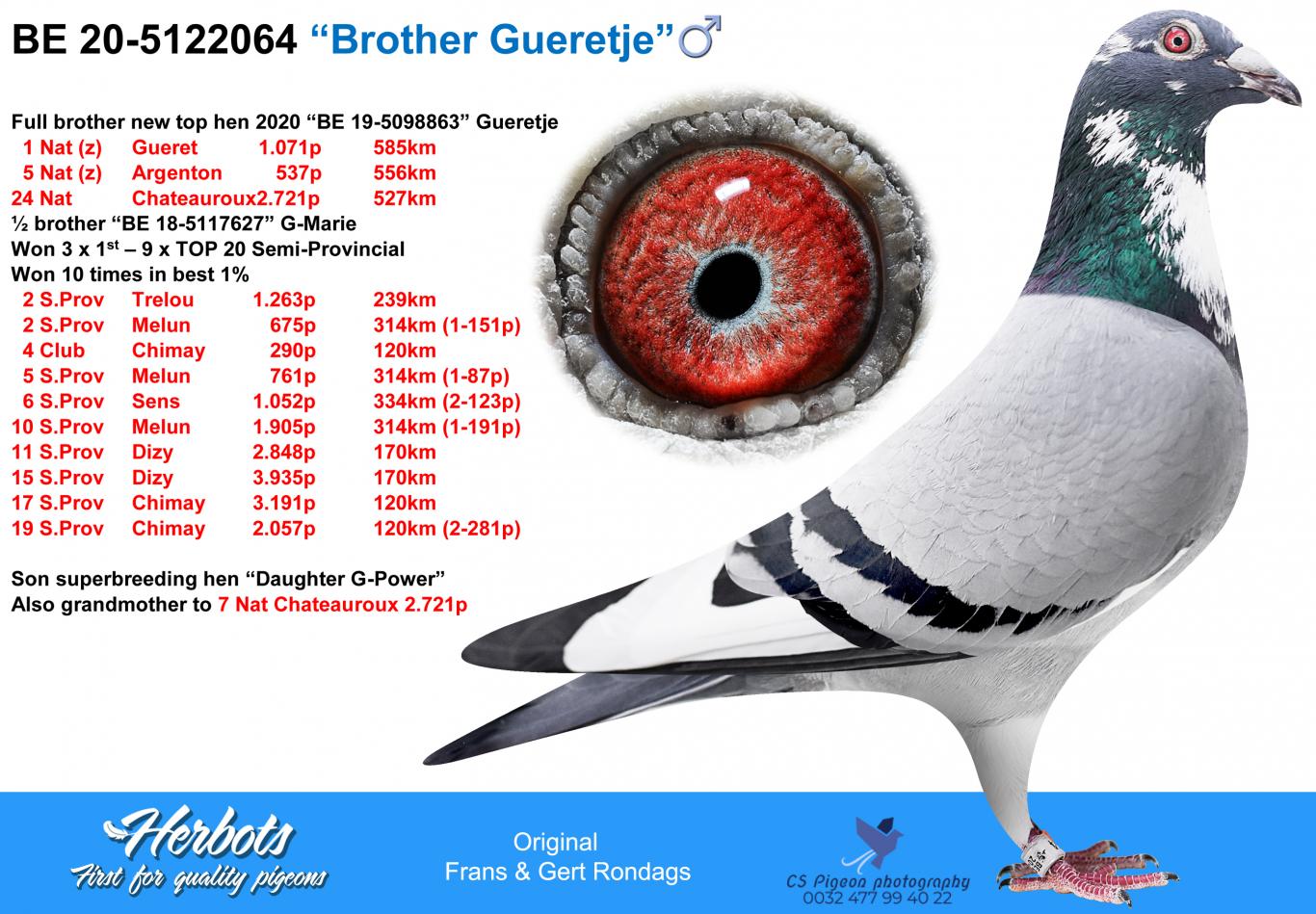 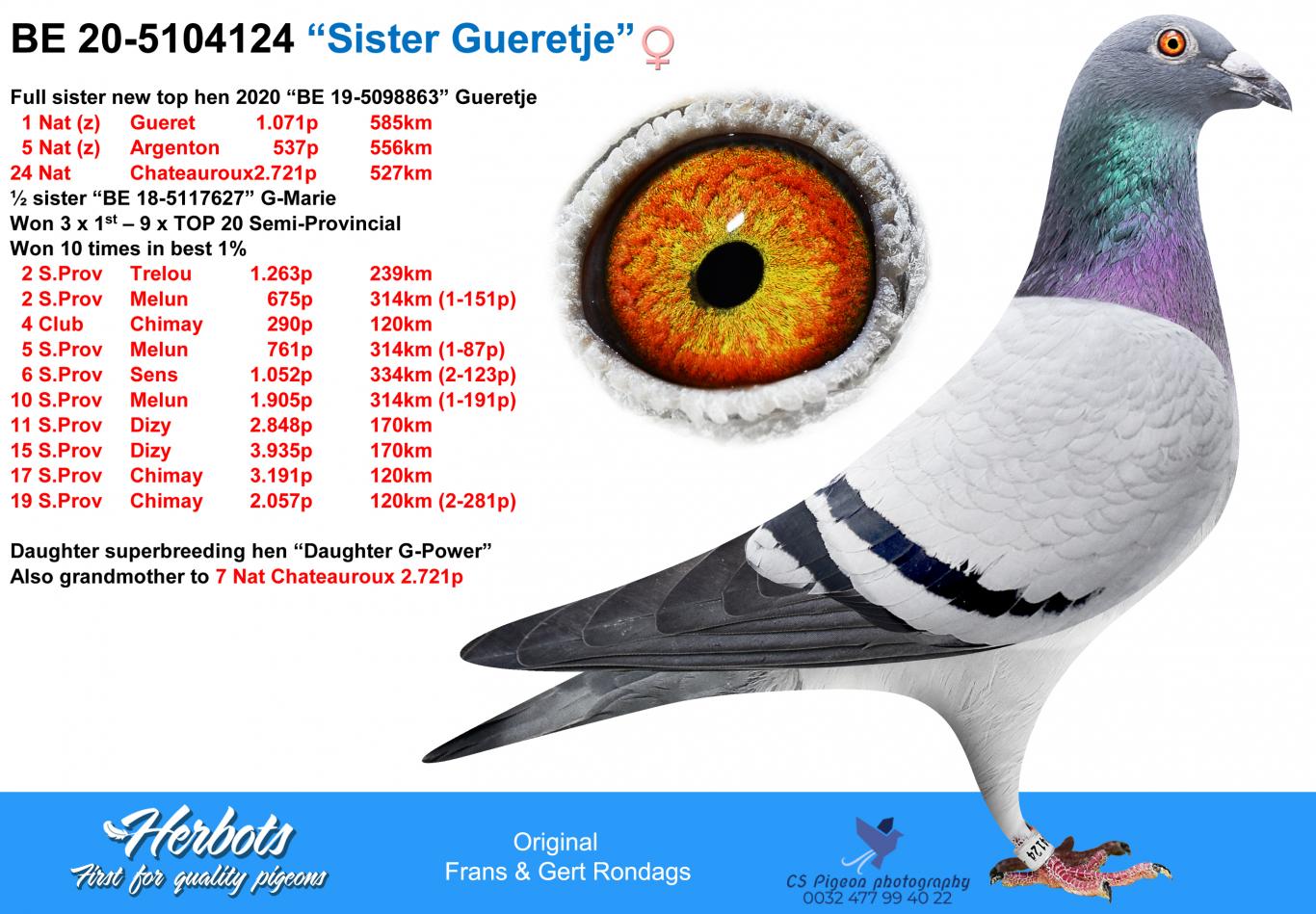 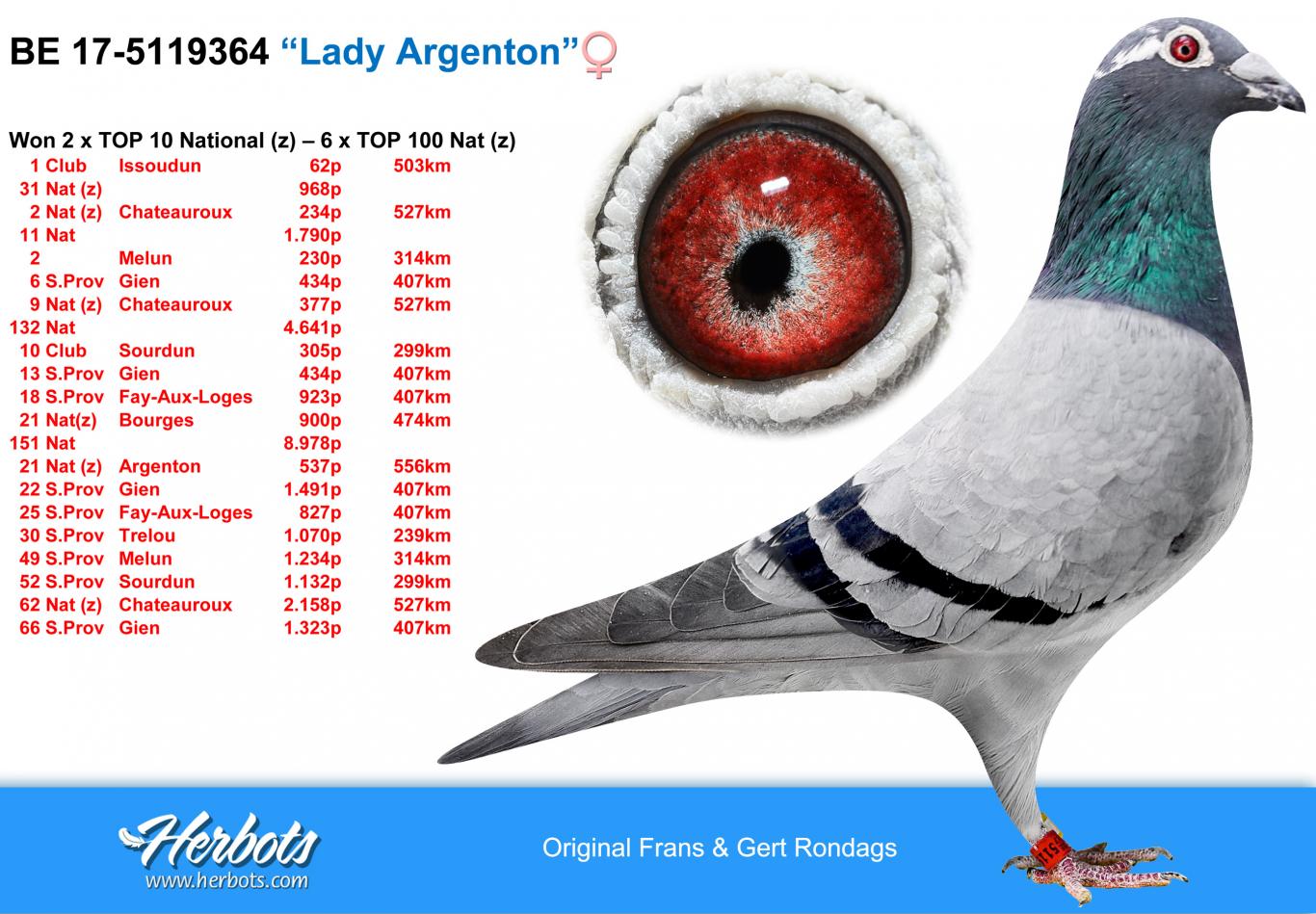 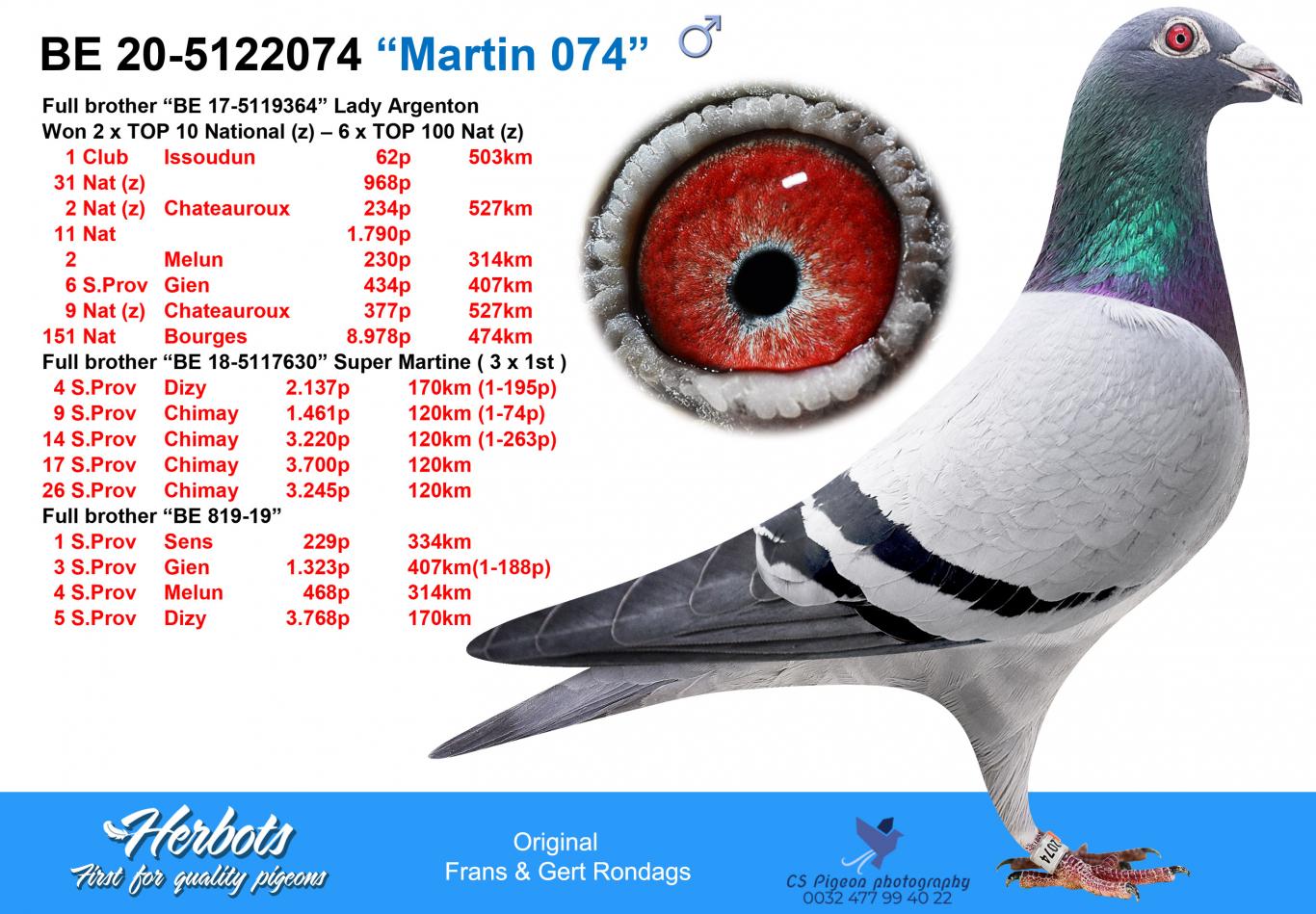 Off course we asked Frans & Gert to breed something special out of their very best short distance racers for this online auction.

Again the golden combination from “Mr.Bolt” coupled to the old strain from Frans & Gert. The top pigeons “Boela” – “Nina” – “Rogerke” and “Leo” all have the DNA from Mr.Bolt in them. 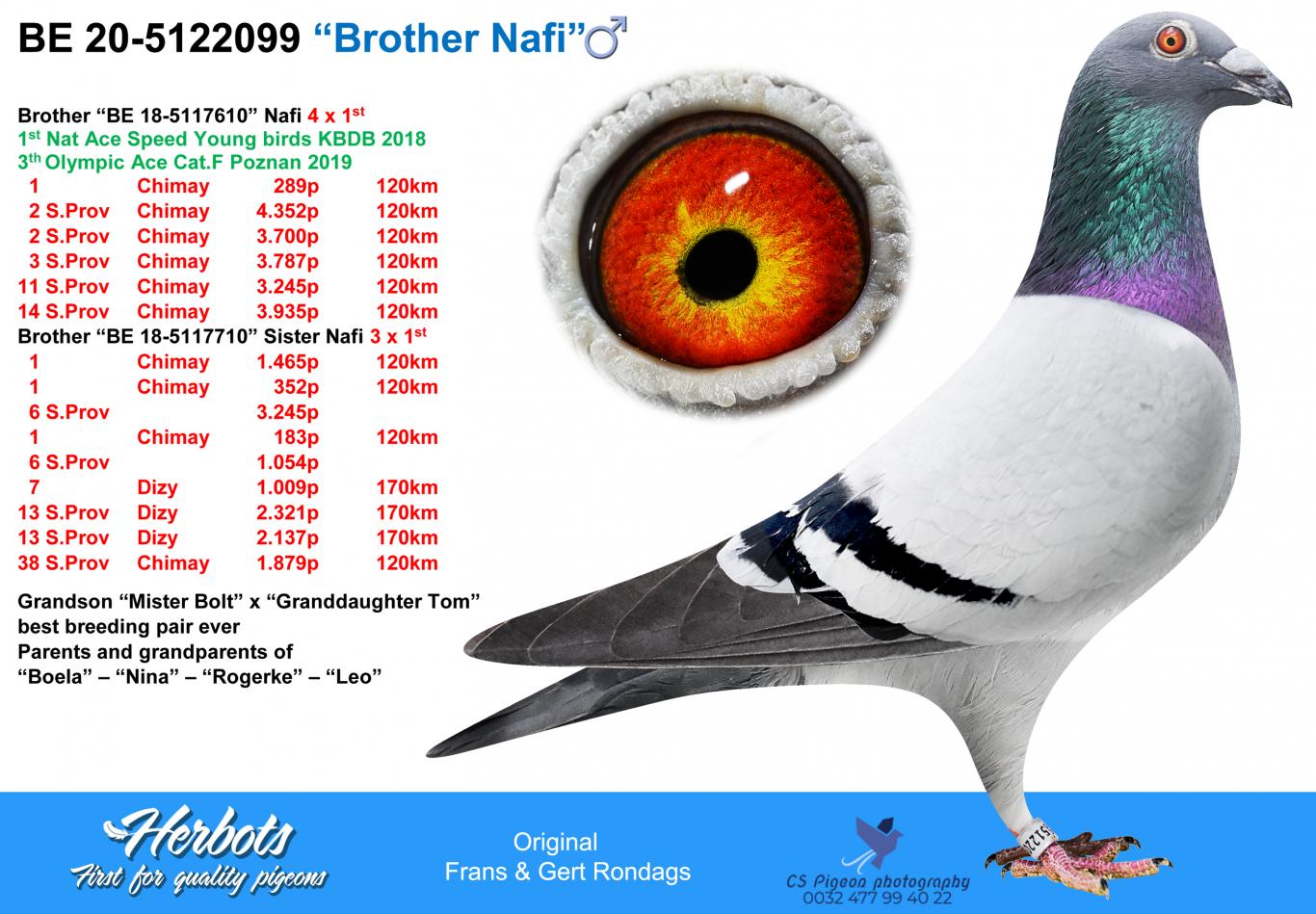 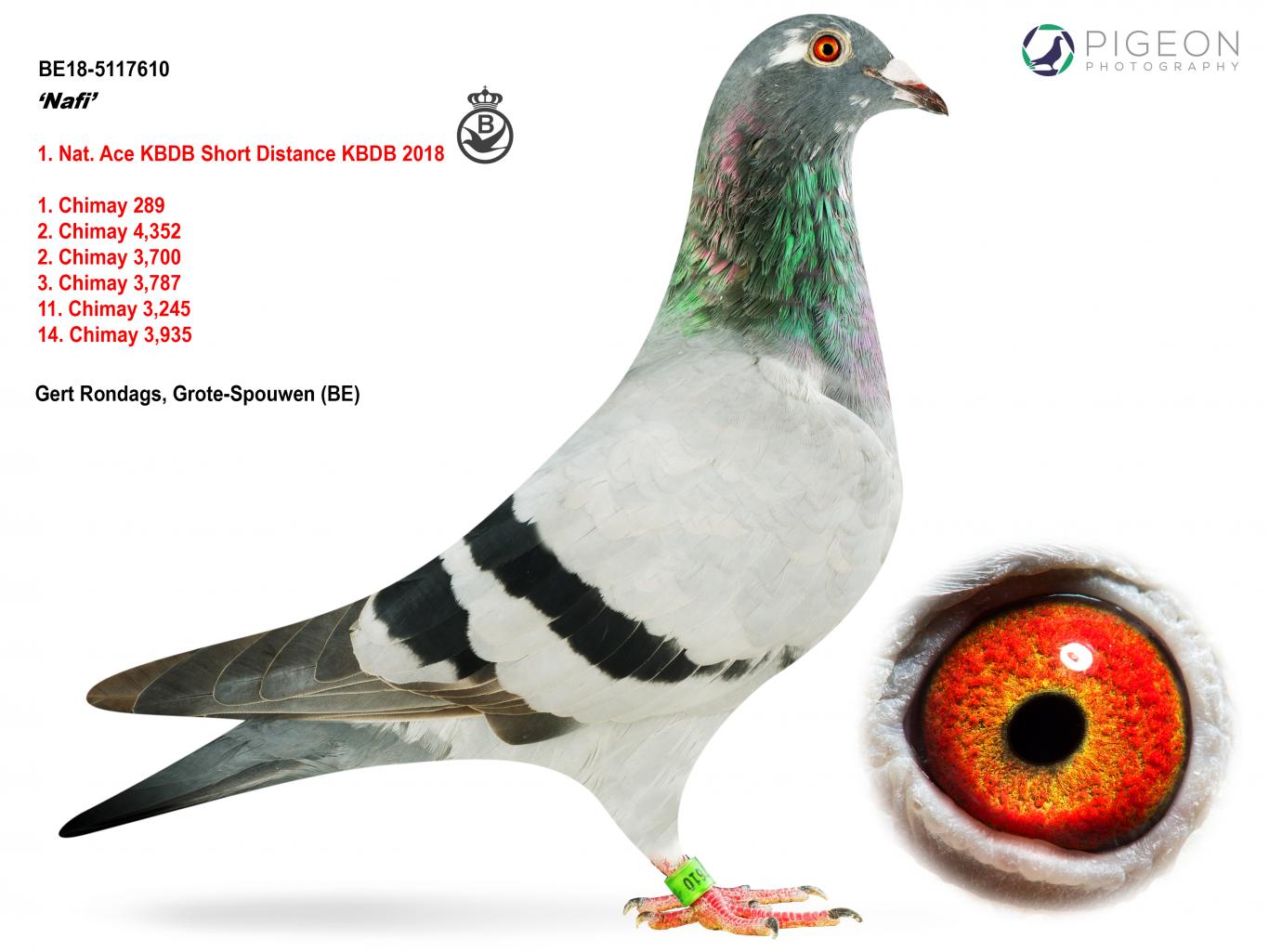 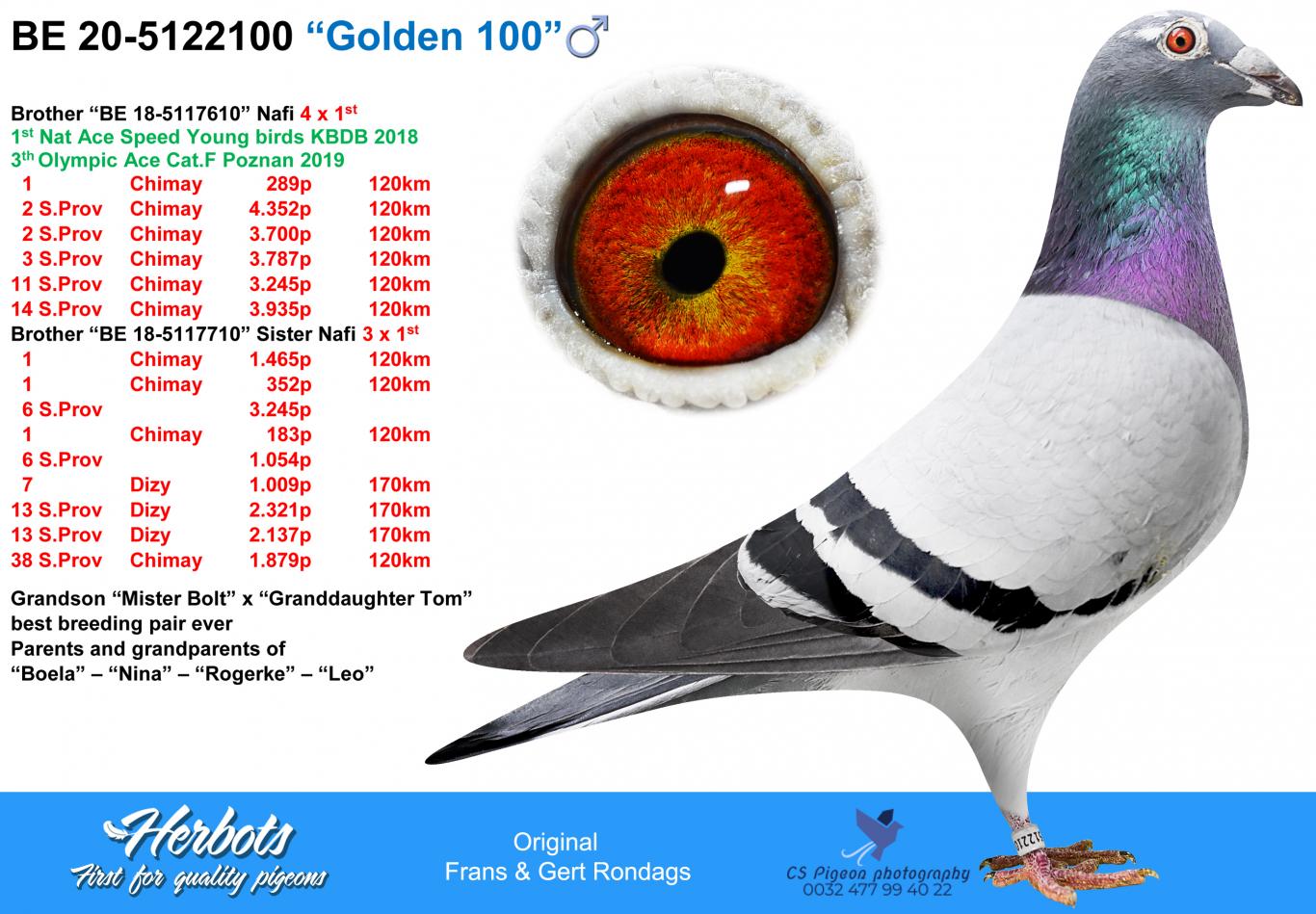 Also the next pigeon is one like this with the best short distance blood running through her veins namely lot number 3, BE 20-5122089 “Romarie” 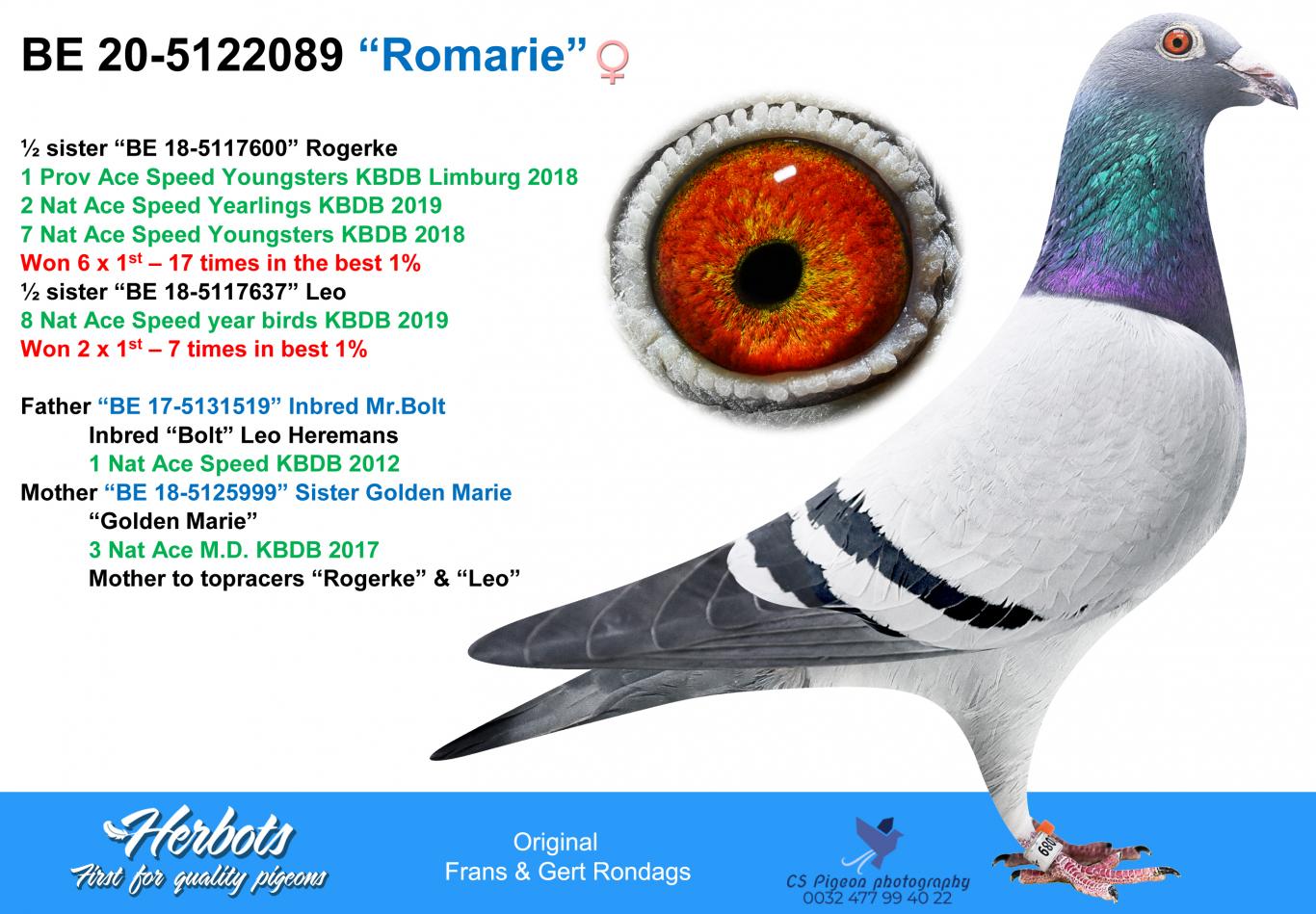 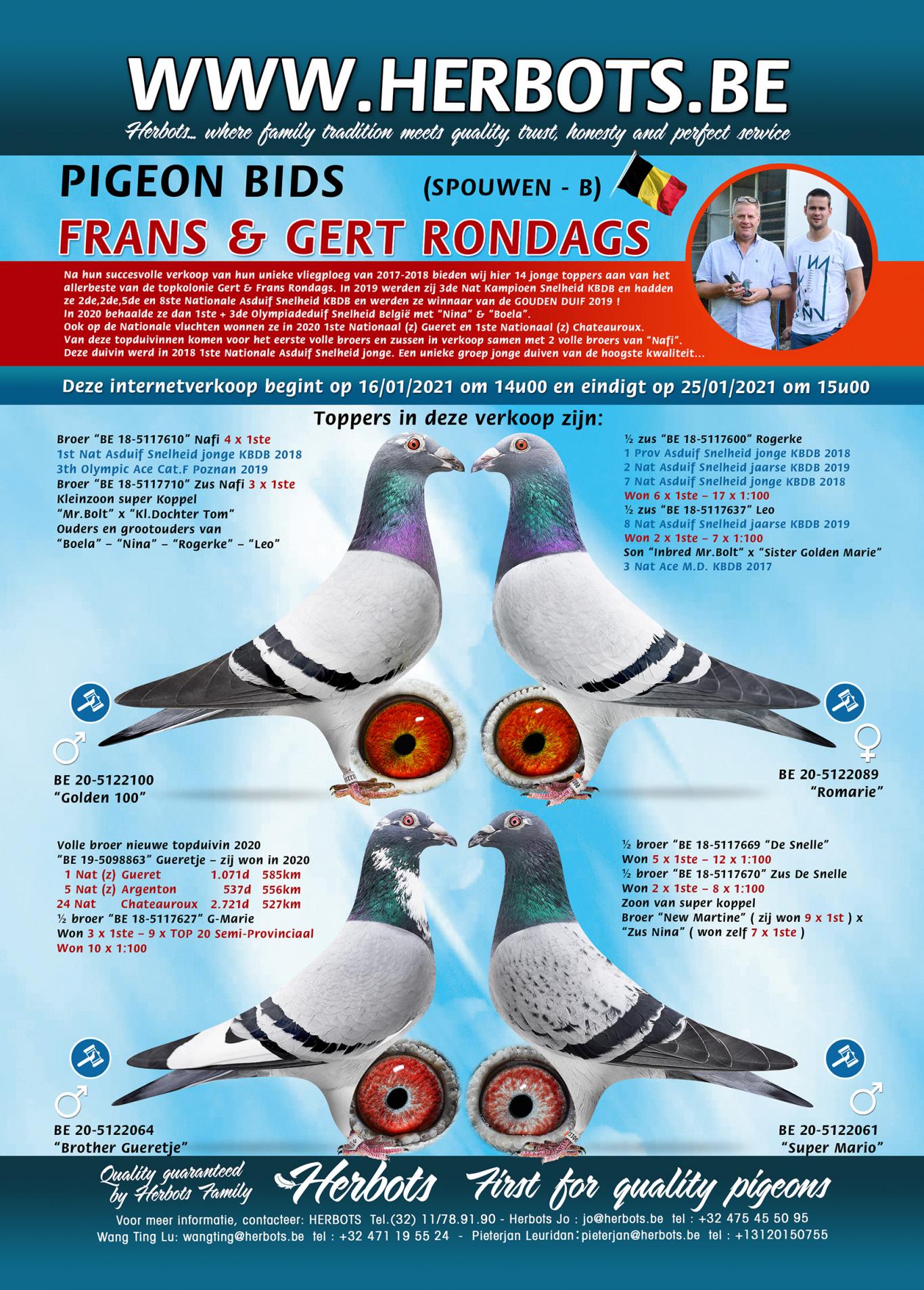