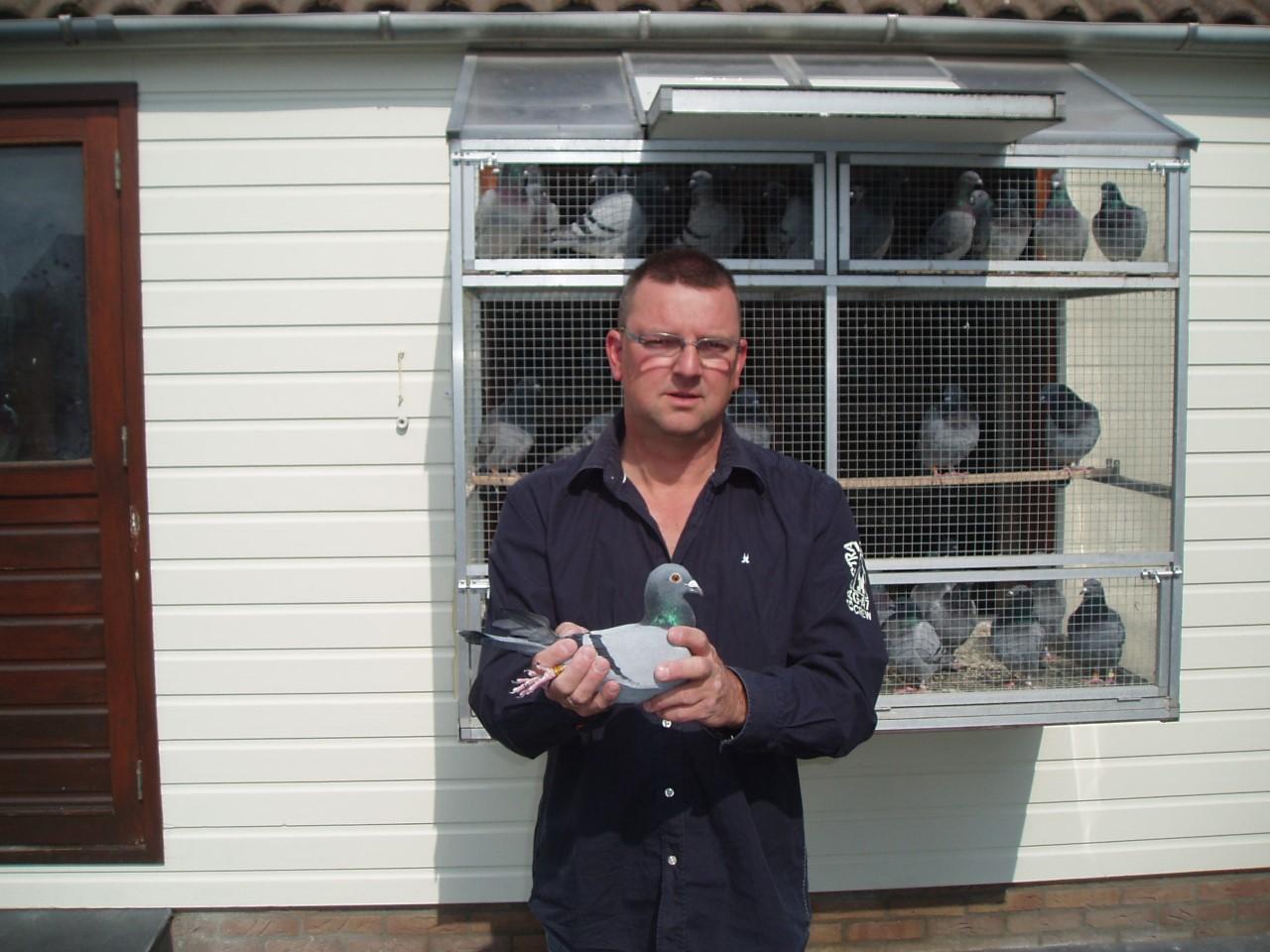 Arnemuiden: We are sure that we are not the only ones but when we, being pigeon fanciers, hear Arnemuiden, we immediately think of Cees Schroevers. For years, Cees is a topper on the middle distance in the province of Zeeland. Also last season the Schroevers pigeons confirmed their class.

Other achieved championships are:

But also on a national level Cees is not to be outdone by the very best lofts in the Netherlands as in 2019 he became "Best Grand Master Day Distance of the Netherlands" and this with only a team of 6 pigeons. Indeed, no mass of pigeons to discover here because due to the limited loft accommodation Cees plays "only" a team of 18 couples on total widowhood. In addition, he annually breeds about 60 young pigeons and on the breeding loft houses 12 couples.
Cees is working as a lockkeeper and since he is working in a shift system, he has very irregular working hours. Because of this, the pigeons sometimes train in the morning, sometimes in the afternoon or in the evening. Cees does not attach much importance to it. "My pigeons are so used to it that no regularity is regularity" he says laughing "oh...the class of the pigeons is still decisive but on the other hand I must admit that the help of my wife and my brother Ko is welcome. Without their help, pigeon racing would be totally impossible."

Cees entered the pigeon sport in 1984 when he finally hung up his football boots and came to assist his father with the pigeons. Father and son Schroevers achieved a succession of top successes, with as absolute highlight their title of 1st National Midfond Champion, and 1st General Champion Zeeland in 1991. At the same time, the last heroic deeds in pigeon sport of father Marien, who passed away in 1992. That year Cees still won 2 provincial victories on the parental lofts at home... from 1993 he started at his current address on the new lofts that were built there. Of course he had the big advantage to start immediately with the 'old breeding team' which he took with him from the parental lofts. This team was composed of Klak/Janssen pigeons... for the greater part obtained from Harry vd Mierden, who was at the time the loft keeper of Jos van Limpt (world famous under the pseudonym 'Jos Klak'). Also the pigeons of Jos Mariën from the Belgian Berlaar contributed to the success.... although the Schroevers family never did it with the masses, at the time with at most 14 widowers and 35 youngsters! Cees went looking to inject some fresh blood into his 'old strain', and to strengthen it if possible. For this he knocked on the door of Koen Minderhoud (then in Westkapelle), who created a furore with his Gaby Vandenabeeled pigeons. Cees also stopped in Putte at the home of the late Flor and his sons Jos & Jules Engels. Here Cees really hit the 'nail on the head', and discovered in the pairing of 2 direct Engels pigeons, a true 'miracle breeding pair' formed by the "Flor 272/00" x "Bont Florke 265/00"... other acquisitions Cees found on Dutch soil in the form of the direct Gerard Koopman pigeons... which when crossed with the above-mentioned stock pigeons immediately caused fireworks!

The cock "Azelio" paired with the hen "Drie Vijfjes" have been a fixed breeding pair for years. In the pedigree of "Azelio" we see on the father's side the Koopman pigeons (lines "Ermerveen's Hope" and "Annelies"), mother is NL04-0406596 "Nadine" (1st provincial ace pigeon)

Click here for an extensive overview of the breeding references of "Azelio" x "De Drie Vijfjes". 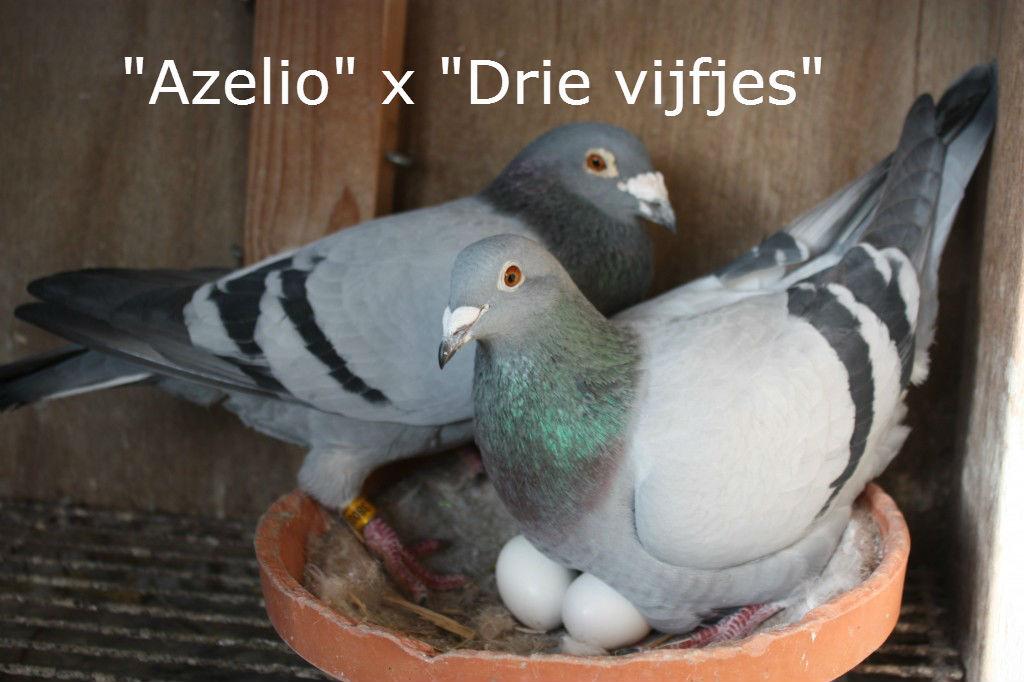 "SuperBoy 775" B10-6163775
This direct Van Eynde-Goovaerts pigeon descends from a grandson of the famous "Kaasboer" of Gaston Van De Wouwer and from the "253 Vichy-dove" of Van Eynde-Goovaerts. "Superboy 775" performed very well himself and became 6th National Ace Pigeon Young Pigeons TBOTB. 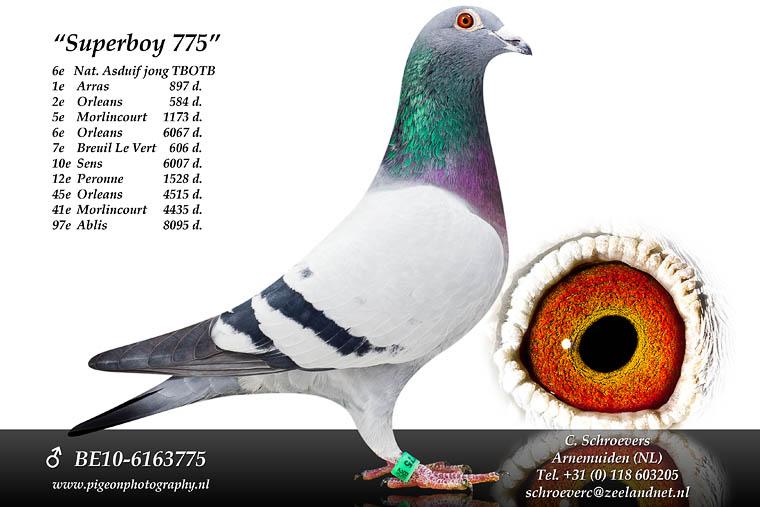 At the moment Cees sells on internet auction Pigeon Bids a select group of performance and young pigeons and among them is a direct son of "Superboy 775" . 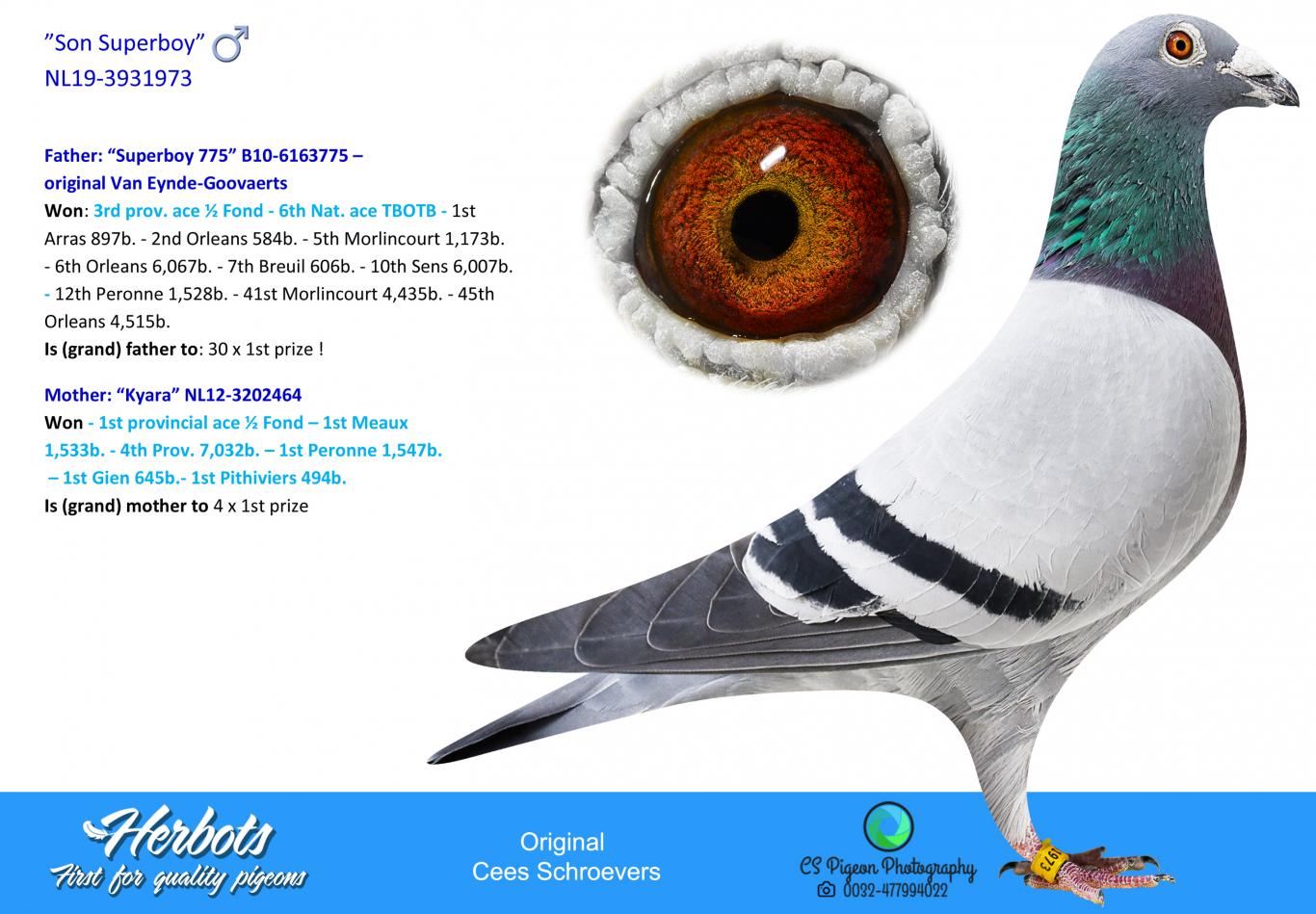 But the most impressive is his stamp which he put on the present strain of the Schroevers colony. Not only in first generation but also in second generation he gives champions.

One of his known sons is "Golden Boy" 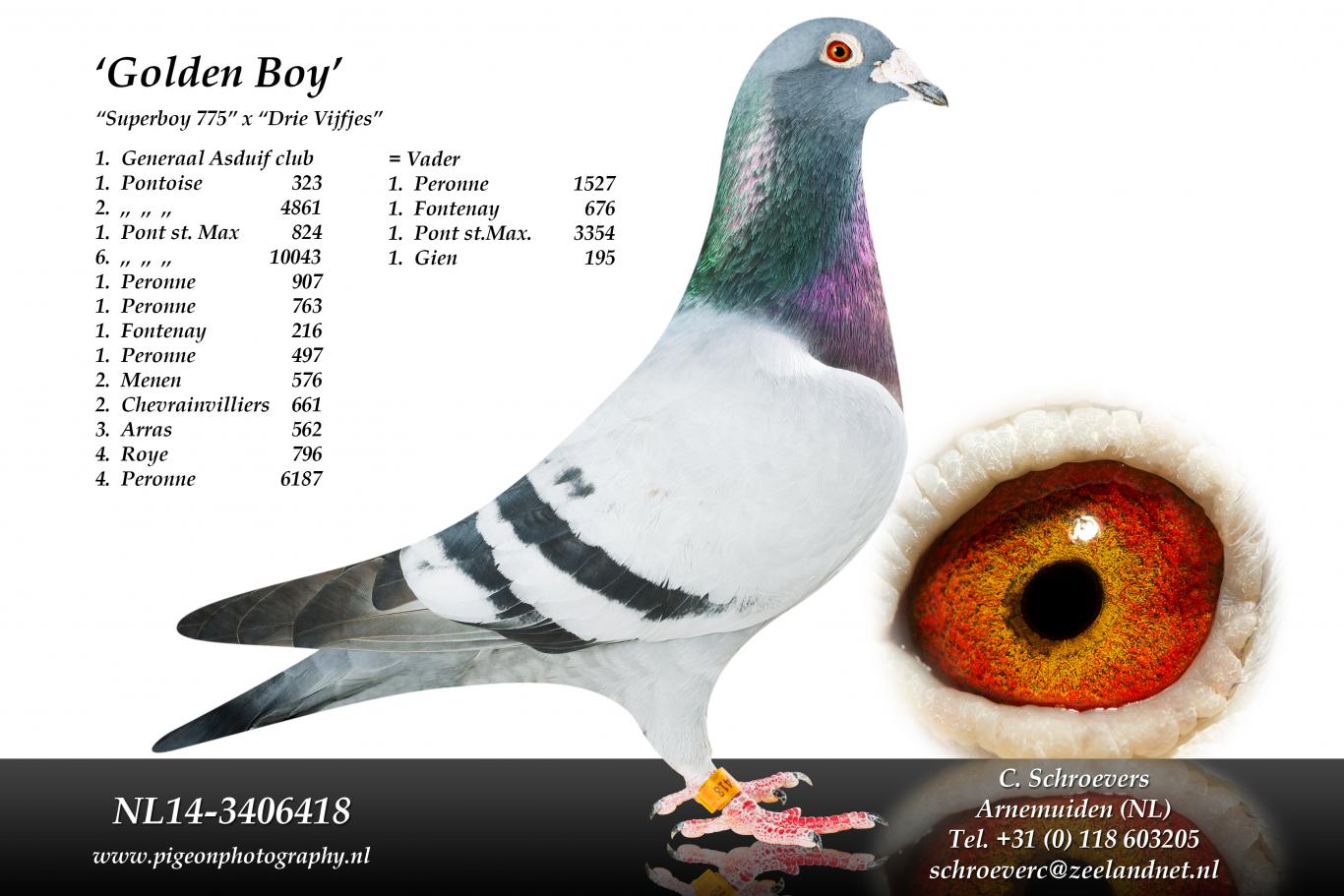 At the moment Cees sells on internet sale Pigeon Bids a select group of performance and young pigeons and among them are the following children of "Golden Boy". 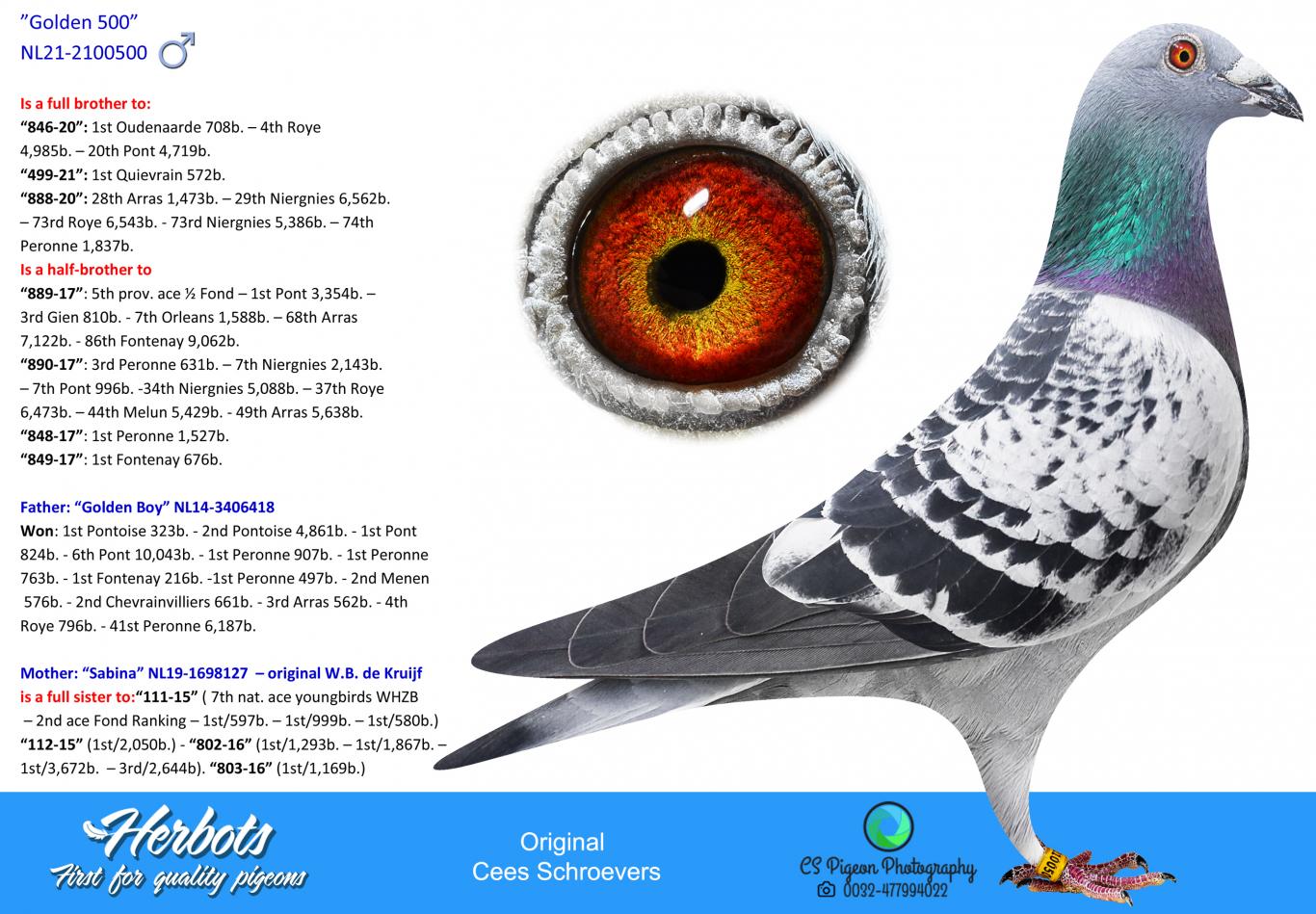 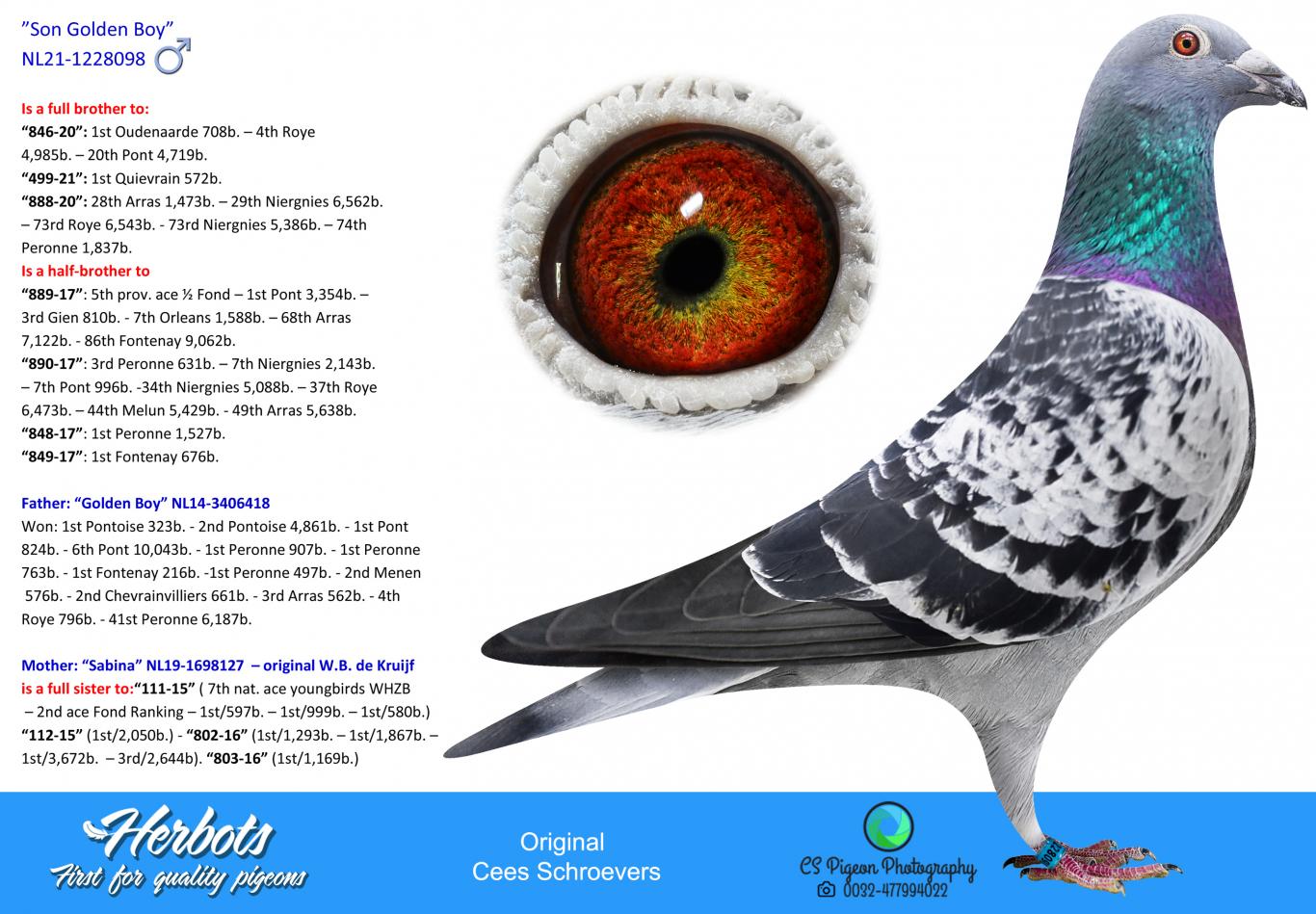 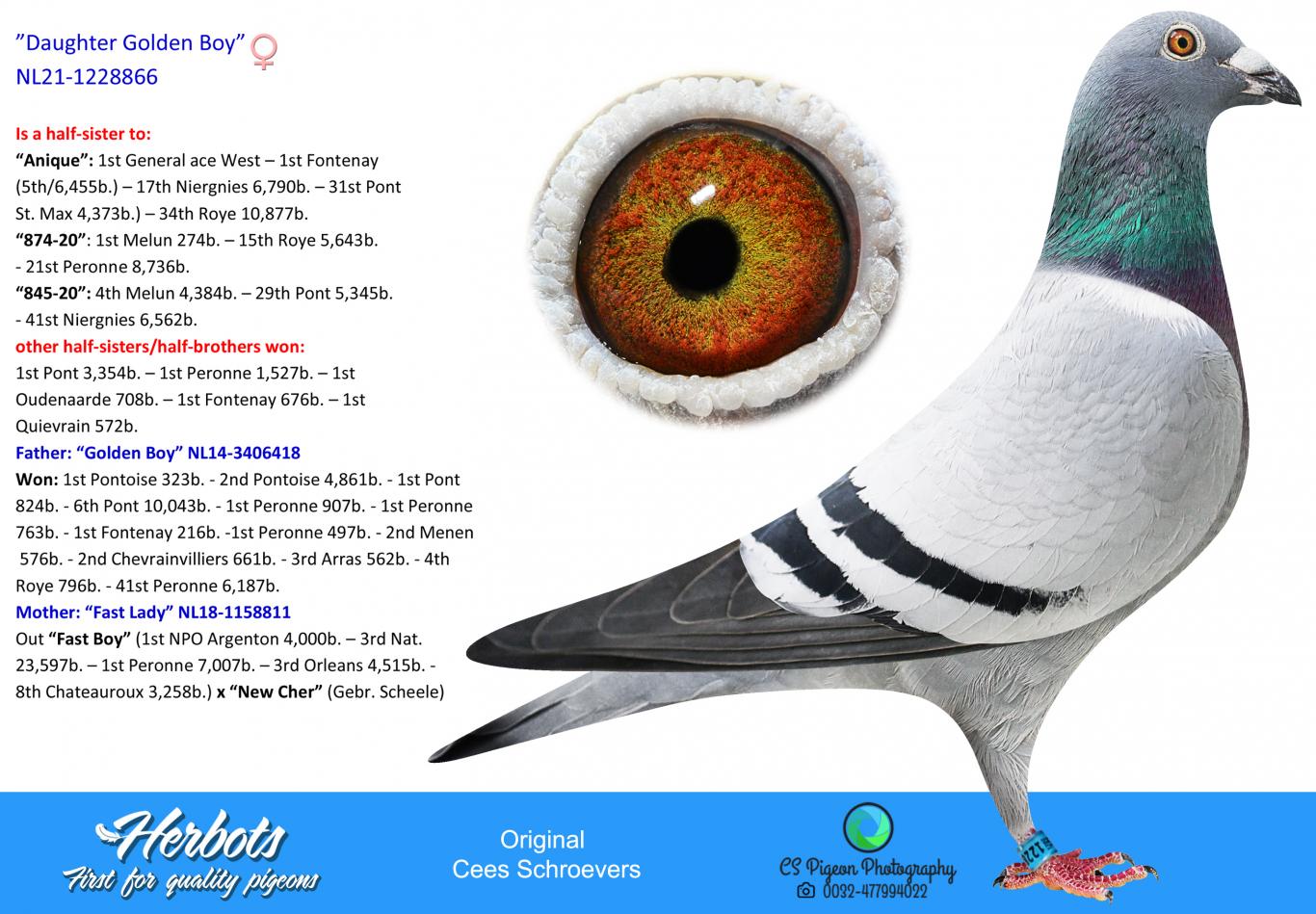 An other topper in this auction is: 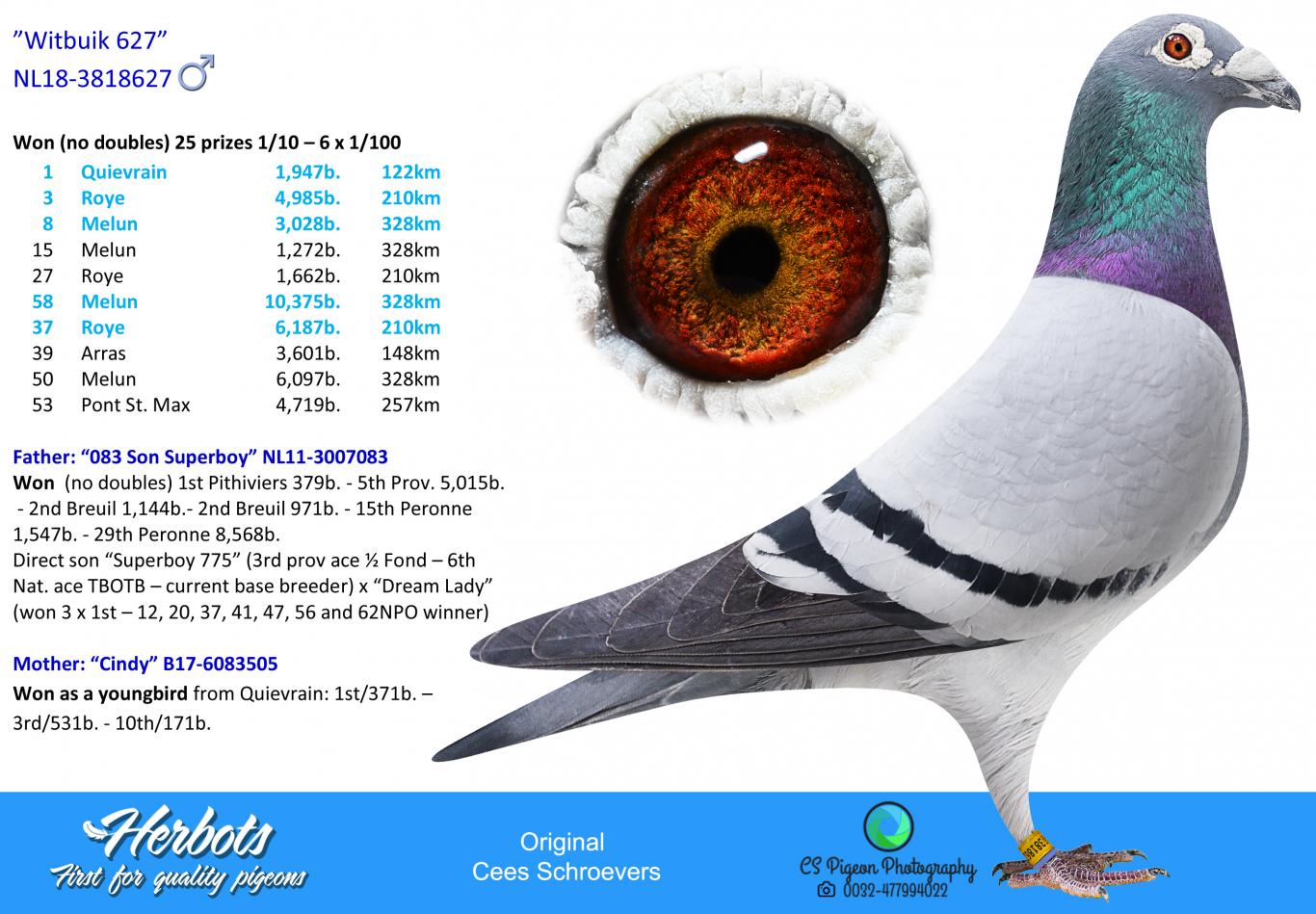