Dordrecht, a beautiful city in the province of South-Holland to be found at the three river point. The conjunction from the Beneden-Merwede, the Noord-Maas and the Oude Maas is the busiest river conjunction of Europe. The Dutch people and water, they always had a special connection and Dordrecht is a really nice example of it. The city became a big city thanks to the transport on the rivers, but the downside is that you always have to take the force of nature and the water into account. This results that they have to build on poles and have to put a lot of effort and energy in building and maintaining dikes and maintain the infrastructure to protect your house. Hidden behind the dike you can find the house of Peter Van De Merwe and his wife Nathalie and daughter Gwen. Their house is nicely protected from the water by the meters high Noordendijk (Northern dike) and their house, despite that they are close to the city centre, is an oases of rest and breeds atmosphere of a small farm. They like animals at the Van De Merwe’s house. Next to Peter you find the house of his parents and also Peters’ father Arie is closely involved in taking care of the animals.

HOW IT ALL STARTED

Peter is a proven asset within the Dutch pigeon sport. From the beginning on he races on the highest level possible. The love for pigeon sport is to be found in his entire family. In 1985 uncle Piet Van de Merwe, introduced Peter to pigeon sport. Until then Peter was interested in almost every kind of animal. His real love for pigeons started when Peter found an injured pigeon and nursed him until he was ready to fly home. From that moment on he lost his hart to pigeon sport. Uncle Piet saw the potential and gave Peter 11 young pigeons. Father Arie built the first loft and Dordrecht had an extra pigeon fancier. The origin of the Van de Merwe colony lays at his uncle. Later more pigeons came from the brothers De Wit (Klak/Tournier – it is a public secret that the brothers De Wit are also at the foundation of other top lofts in Holland). At Van Loon they got back then some eggs which turned out to be golden eggs. Other names that you can find in one way or the other within his strain got there by buying or co-breeding with other fanciers : Ottevanger, Ad Scharlaeckens, Cees Van de poel, Comb B&W, Marcel Sangers (100% Koopman) and the past few years he invested successfully in pigeons from Guy Van Der Auwera (especially the Goovaerts blood from Gaston Van de Wouwer) and Leo Heremans. Very recent the ‘Kittel’ – pigeons from Dirk van der Bulck were crossed in the Van de Merwe strain and the first results are more than promising and off course we can’t forget about the “Blauwe Leo” (raced himself superb and breeds real champions from Leo and Gerry Dockx) and “Dark Gwen” (another racing- and breeding wonder from Hardy Kruger).

In 2015 all racing and breeding pigeons were sold and he restarted with youngsters. This huge challenge became the ultimate confirmation of the power of this strain. In the sale there were no less than 10 NPO-winners. And it didn’t have much or no negative influence on the results who continued being marvellous as ever before.

DID THEY EVER SEE SOMETHING LIKE THIS IN HOLLAND ?

As mentioned before they are all ‘pigeon-crazy’ at the Van de Merwe’s house and everybody, Peter, Gwen and Nathalie have their own department. The nice thing about this story is that they motivate each other to set marvellous results without realizing is well. One of the most striking results that Peter, Nathalie and Gwen had was the NPO race out of Pont-St-Maxence. Against 6,733 pigeons they clocked no less than the 21st 1st prizes ! A never seen result in Holland! 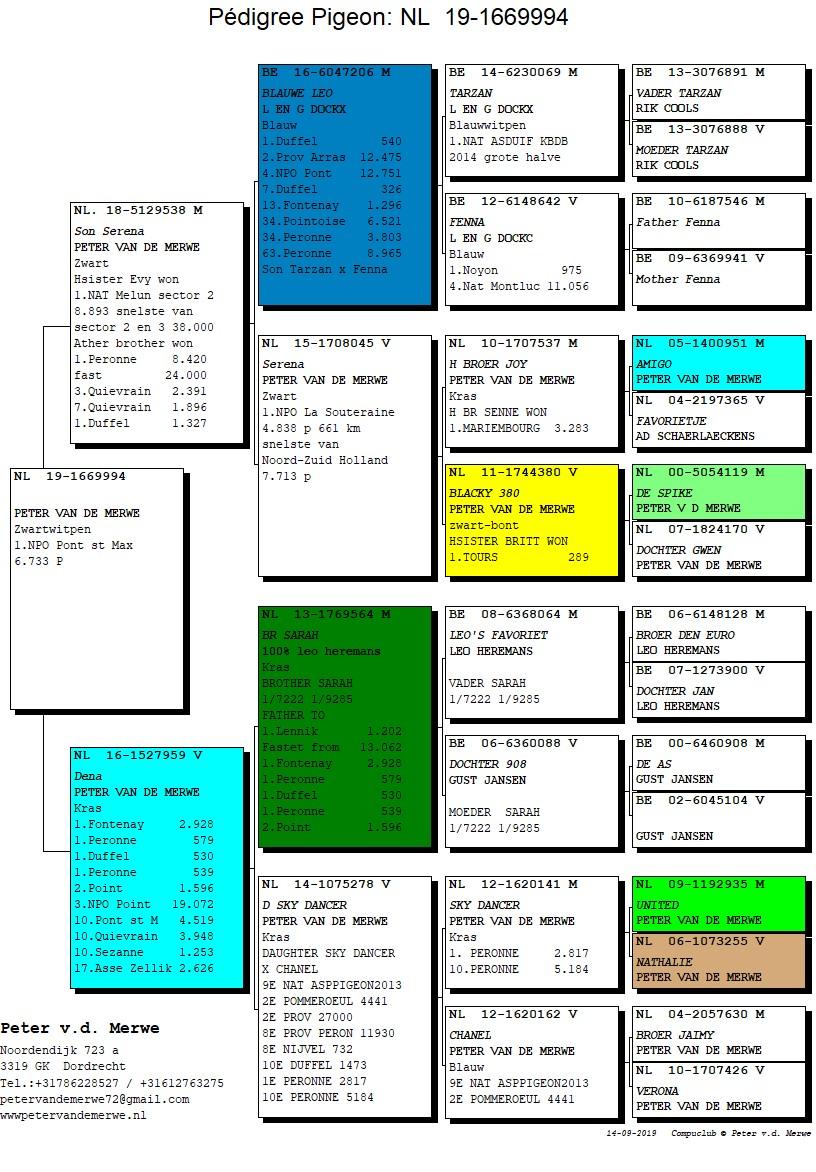 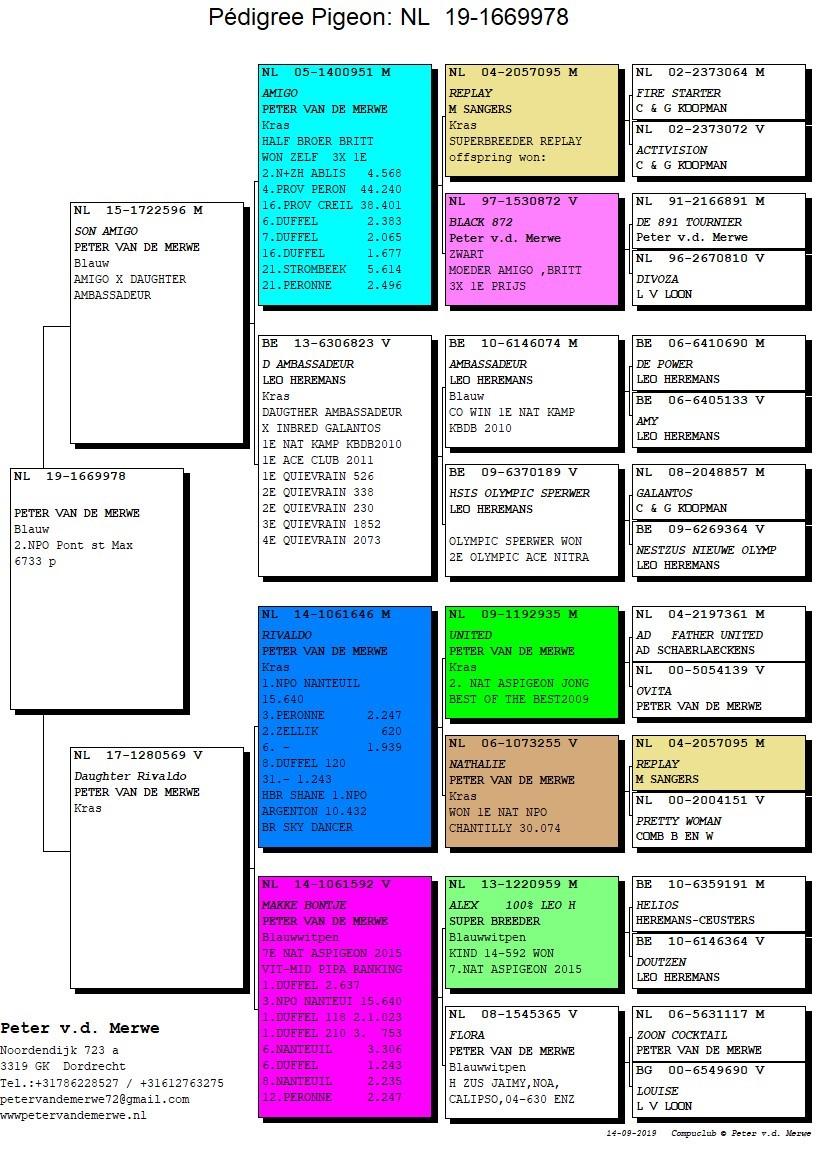 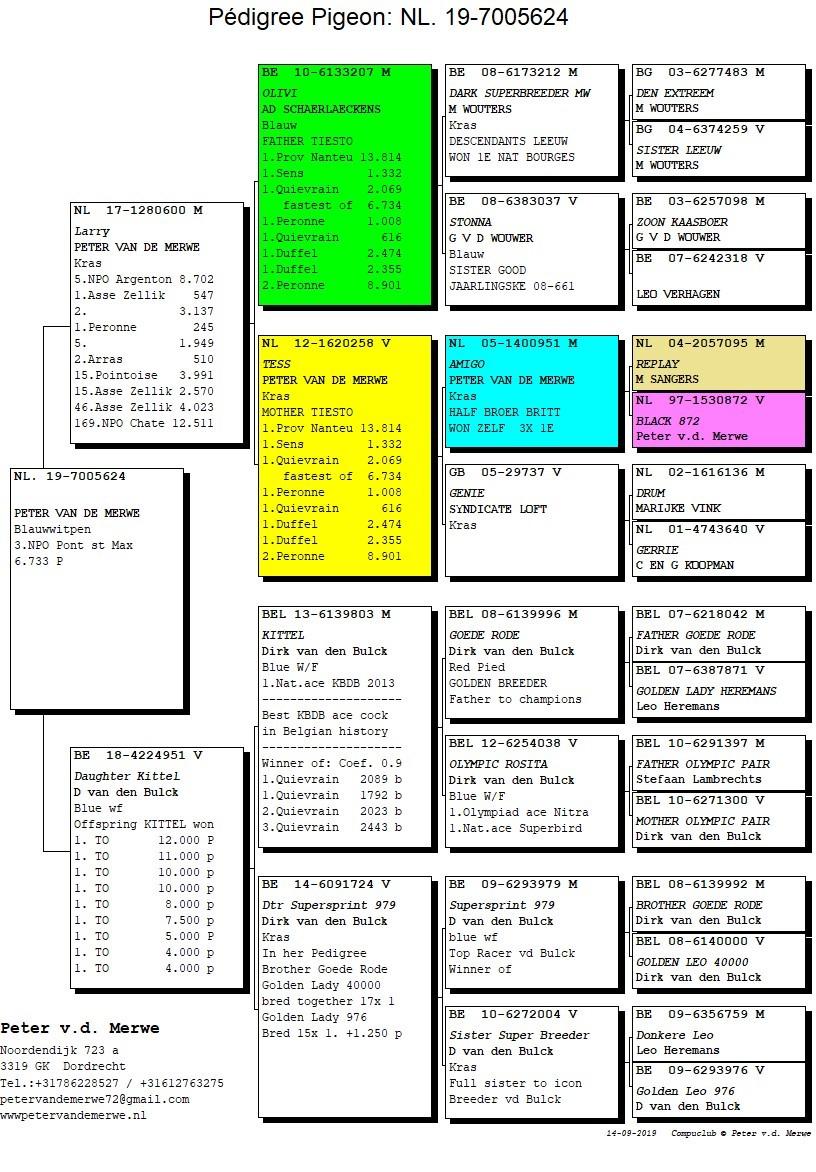 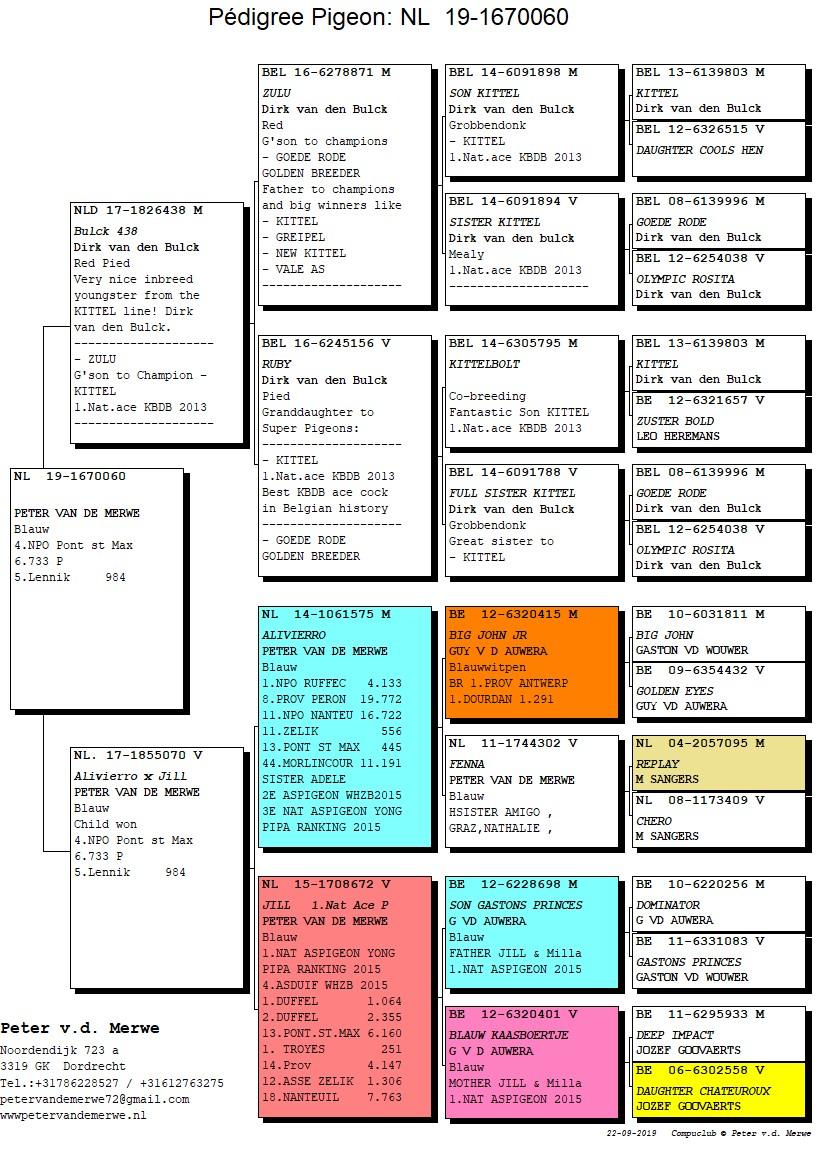 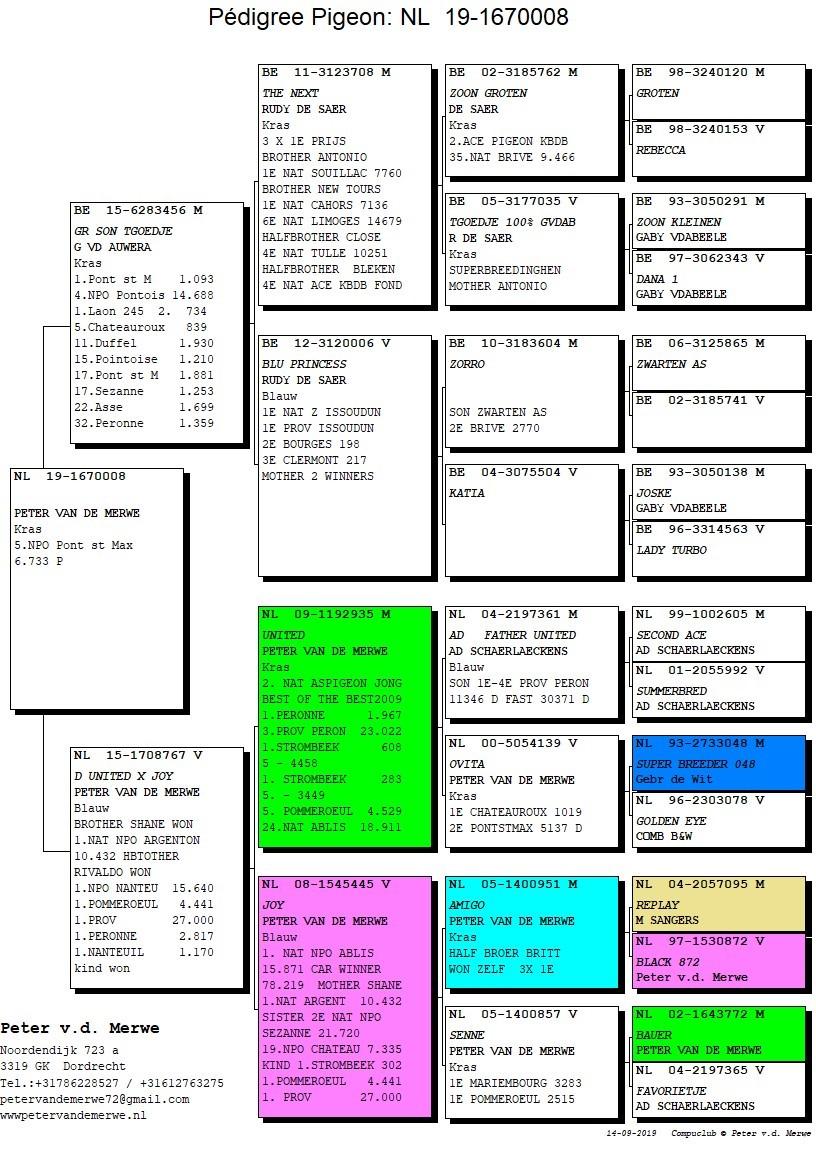 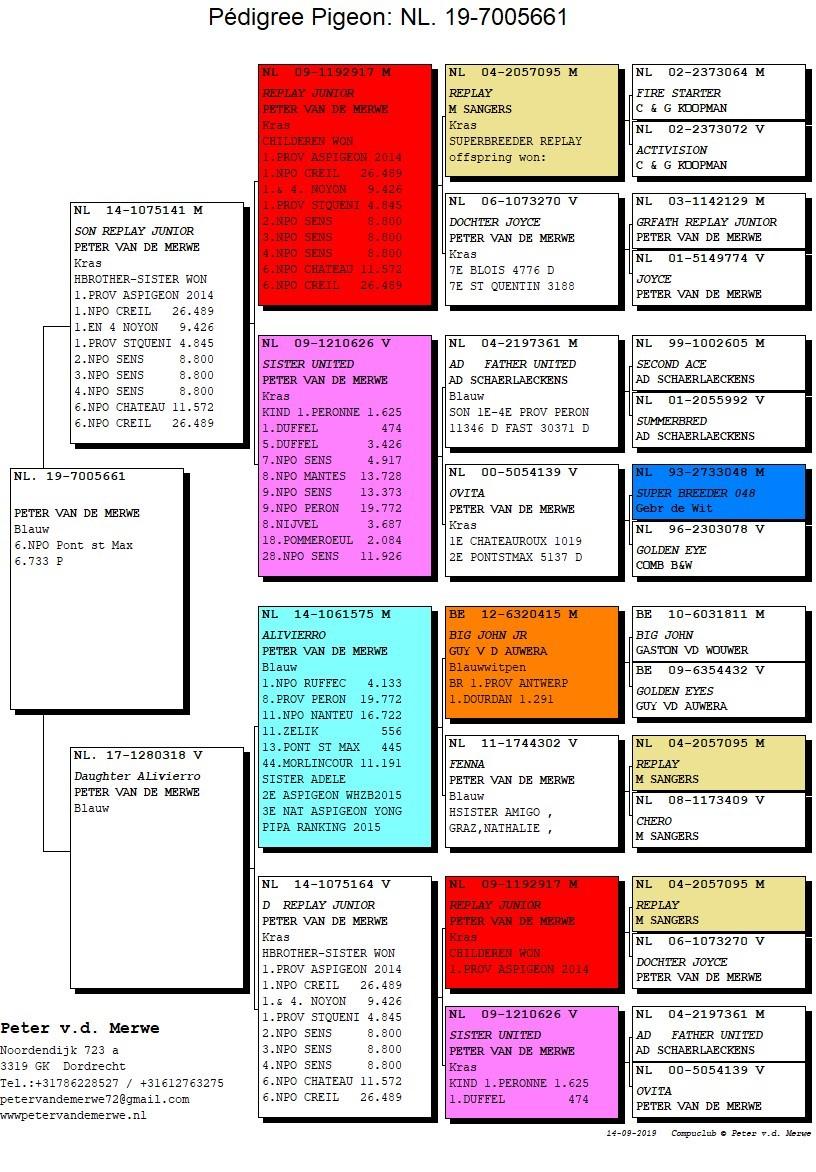 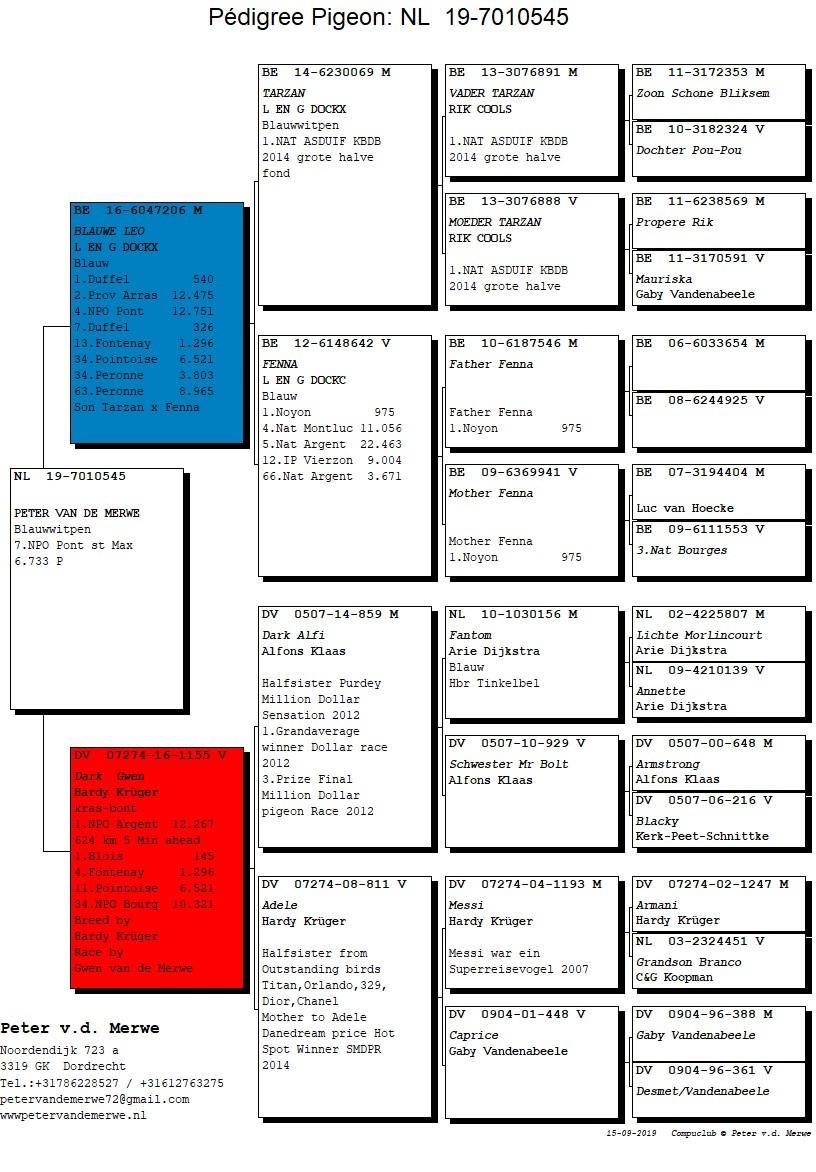 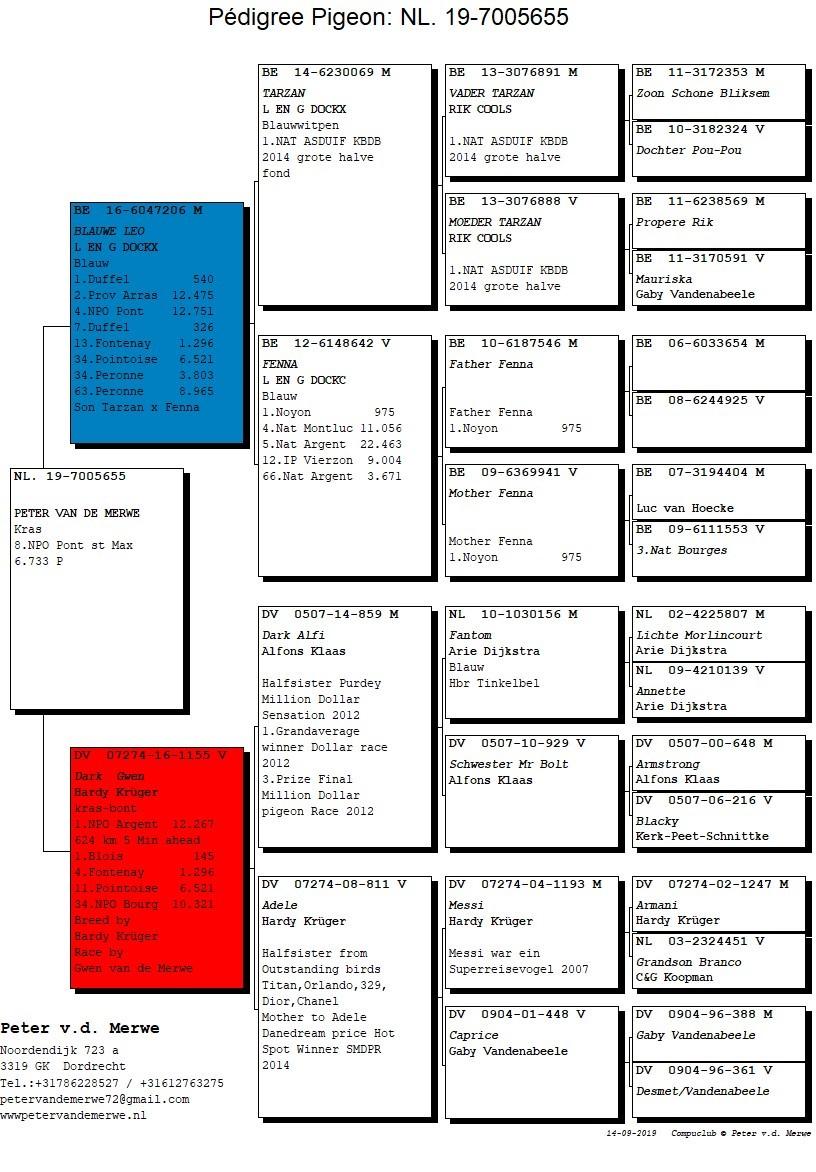 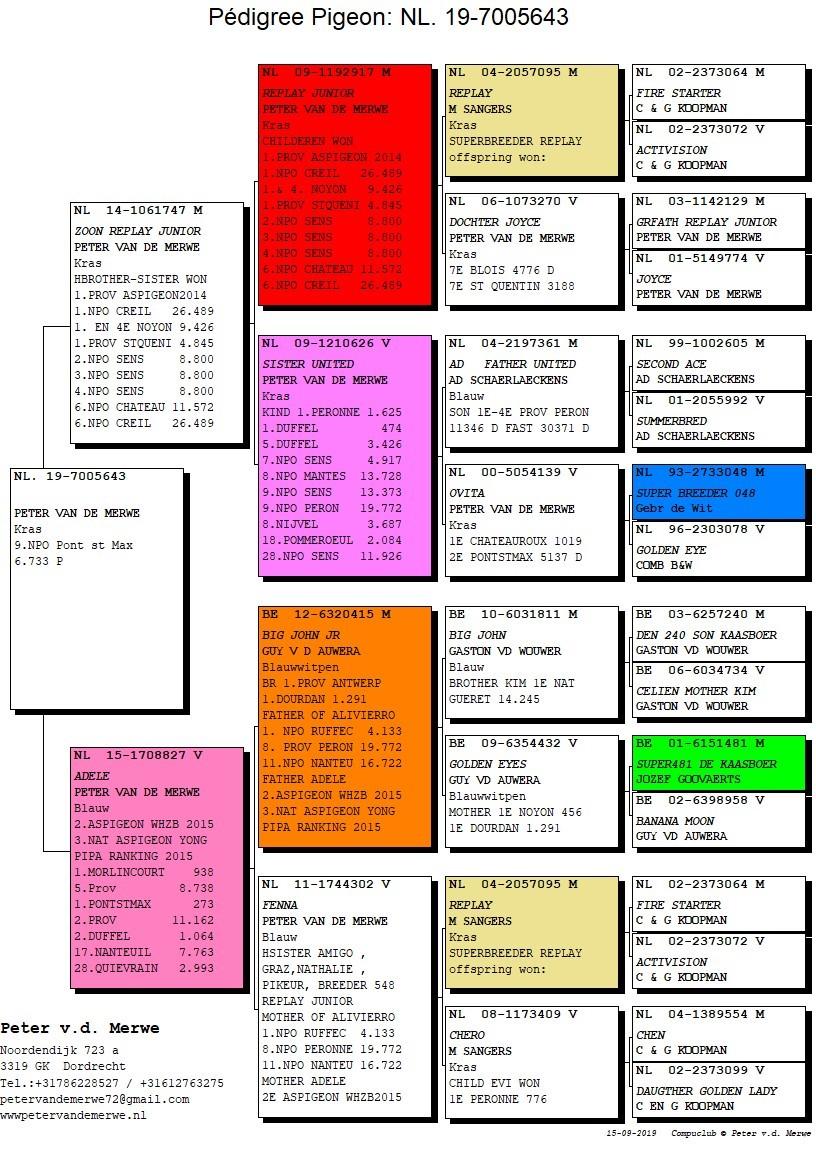 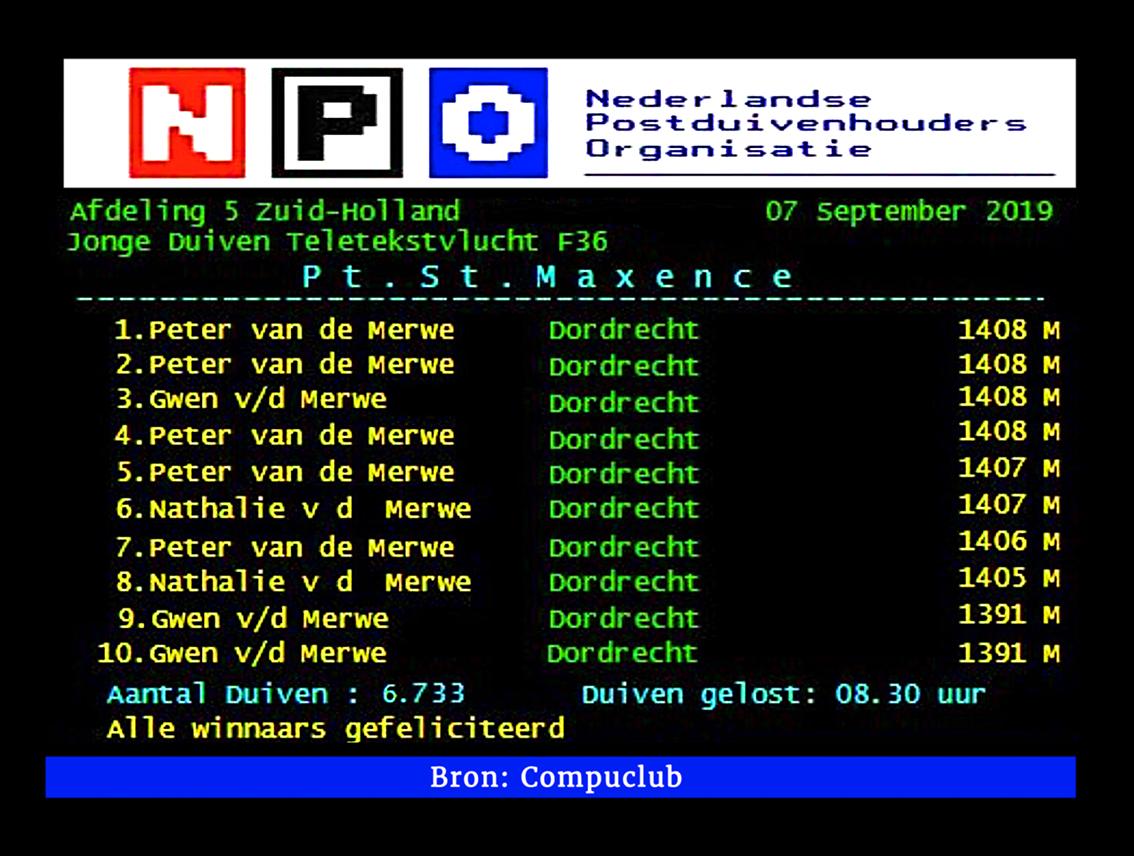 “CHARLOTTE” SHINED ON PONTOISE
About 4 weeks before the stunt on Pont St. Maxence, the Van de Merwe family could already celebrate a victory. It was ‘Charlotte’ that won the NPO race out of Pontoise against 16,215 pigeons ! 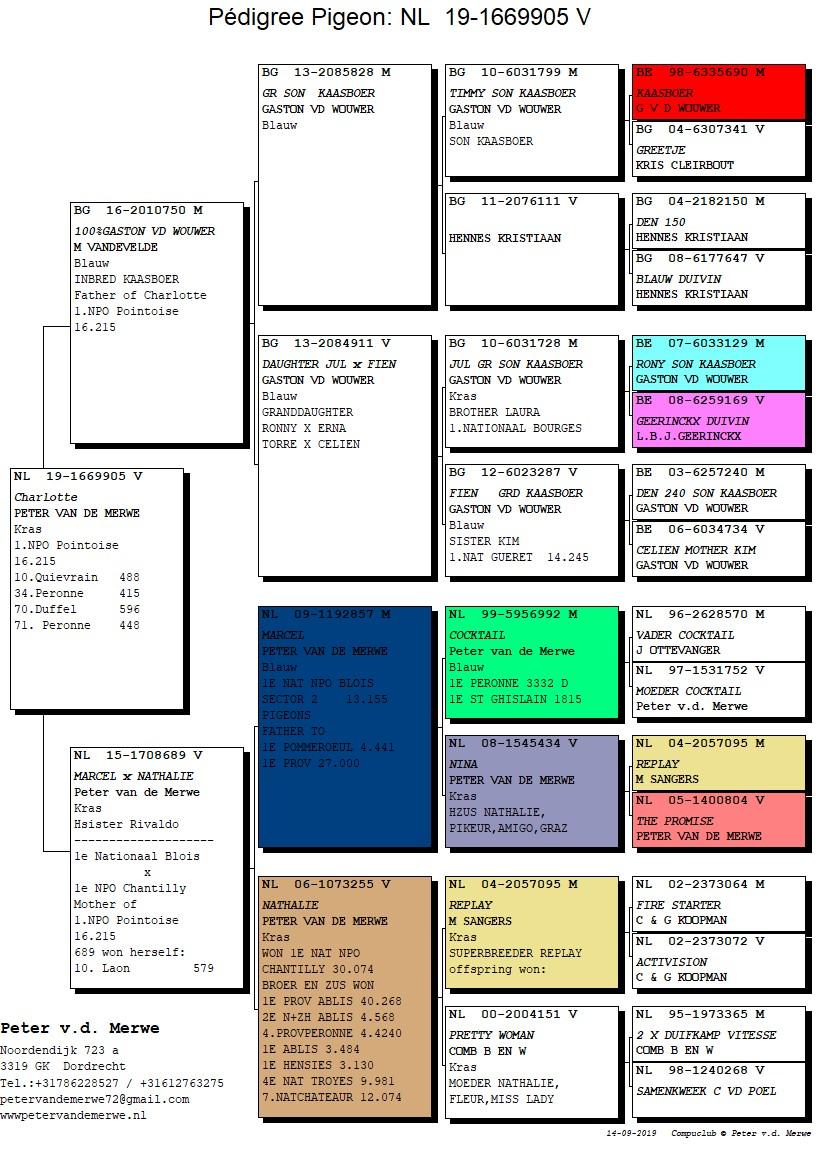 THE ENTIRE STAGE ON PONTOISE
It wasn’t only that one hit on Pont St. Maxence… also on the NPO race out of Pontoise against 3,173 pigeons they pushed everybody of the stage. 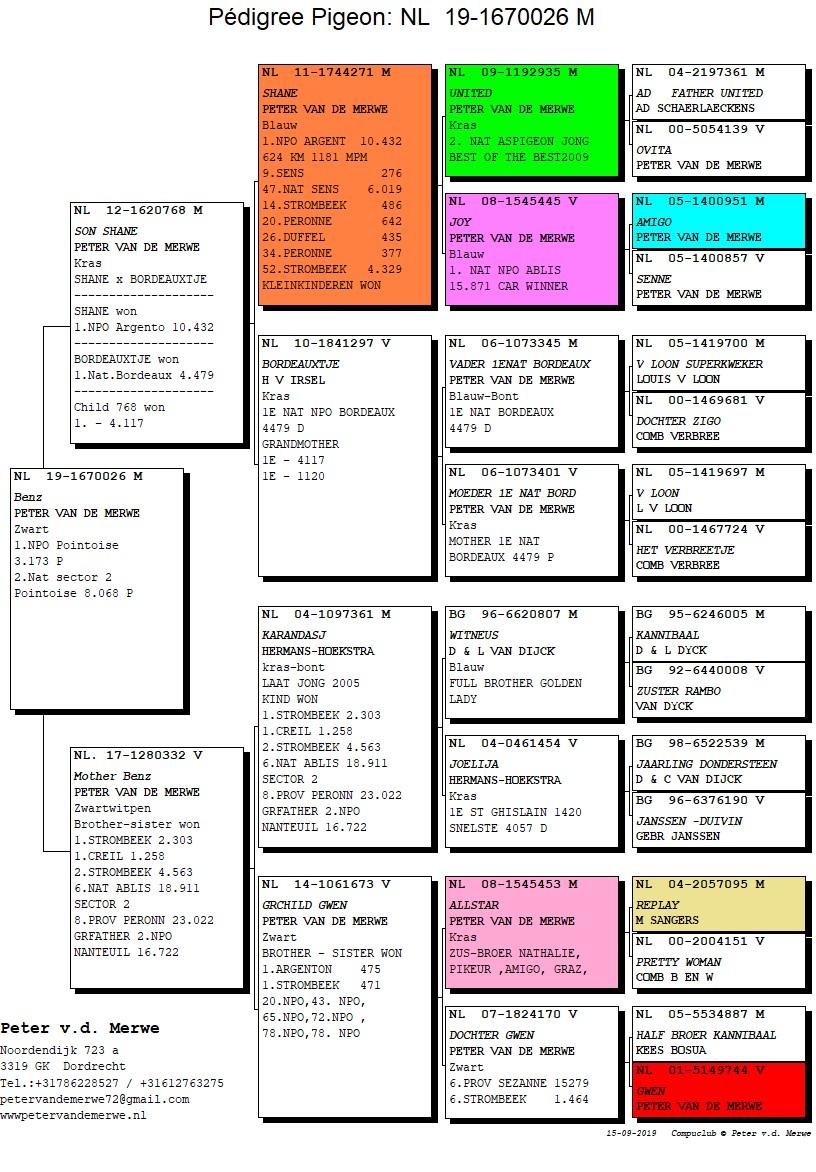 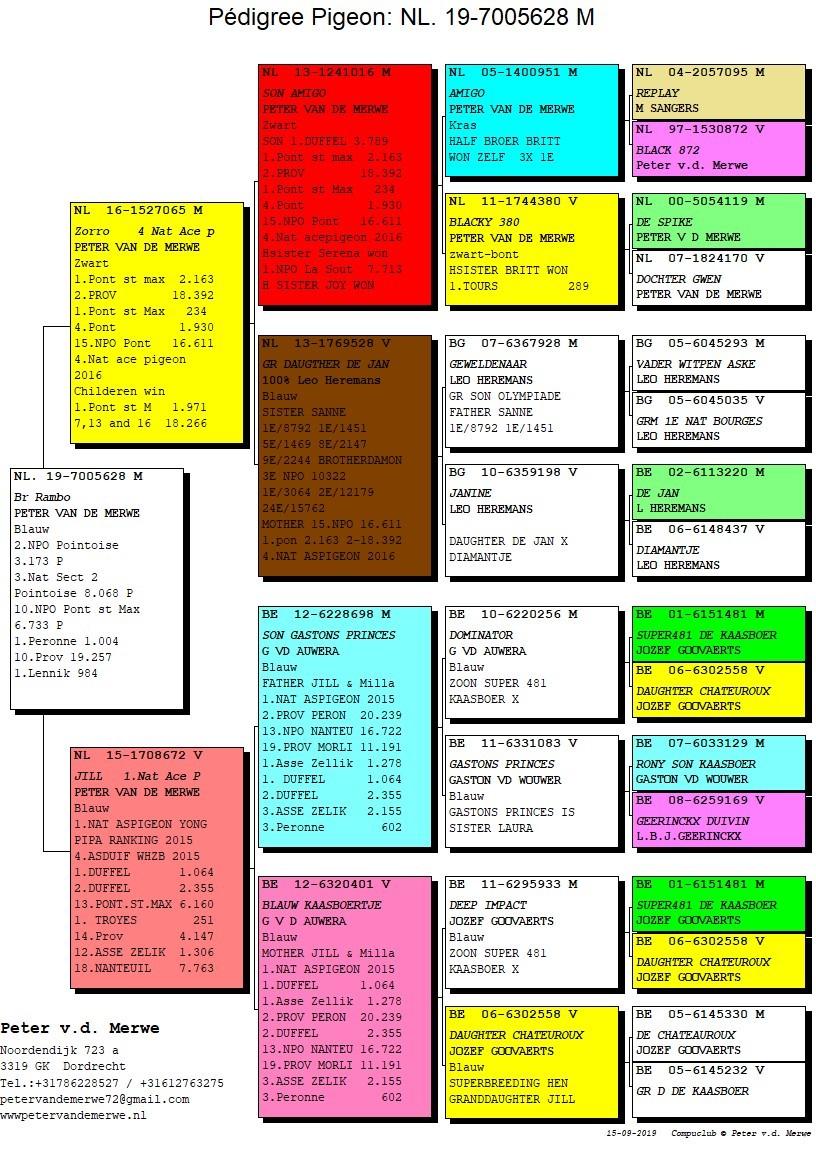 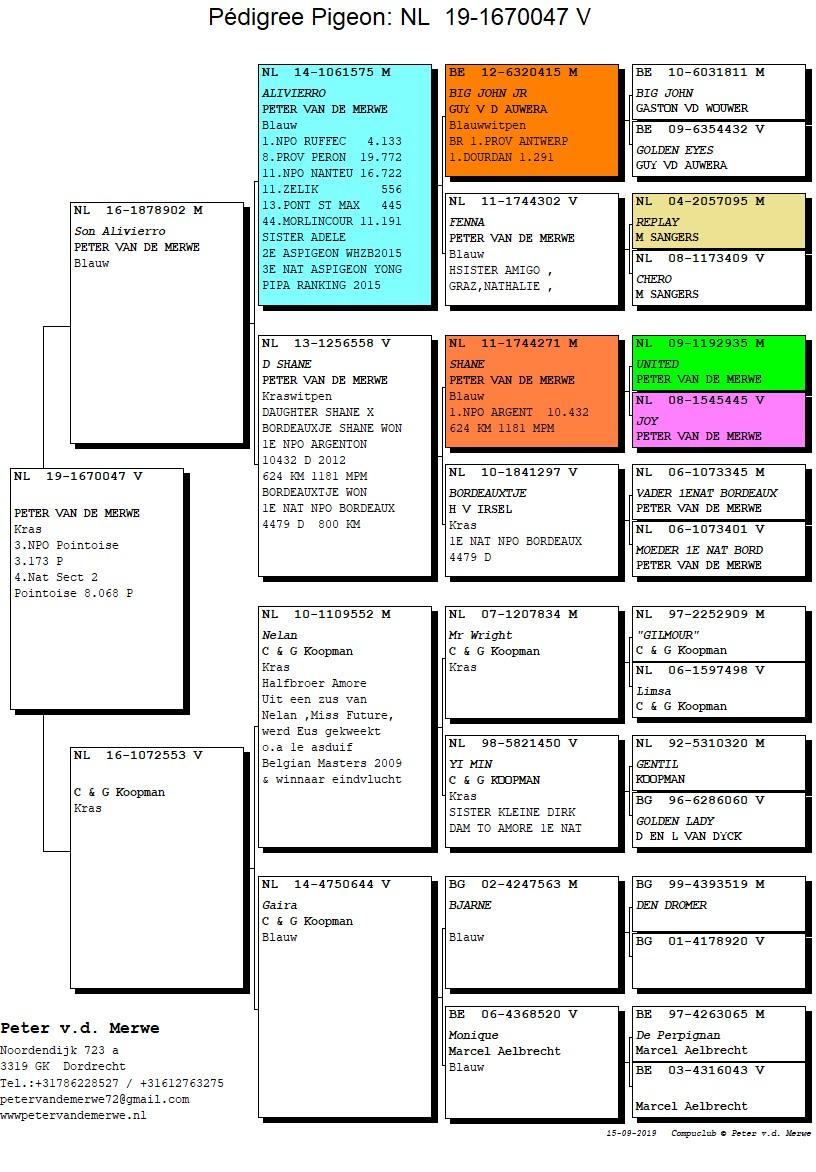 “MILOU”… FASTEST AGAINST 23,654 ISSOUDUN RACERS
Not only the young pigeons raced like hell…also the old and yearling pigeons showed their force. A marvellous result was set by hen “Milou” out of Issoudun. She didn’t only win the 1st National Issoudun against 9,570 pigeons ( sec 2) but was also the fastest against 23,654 pigeons (sec 2 + sec 3). 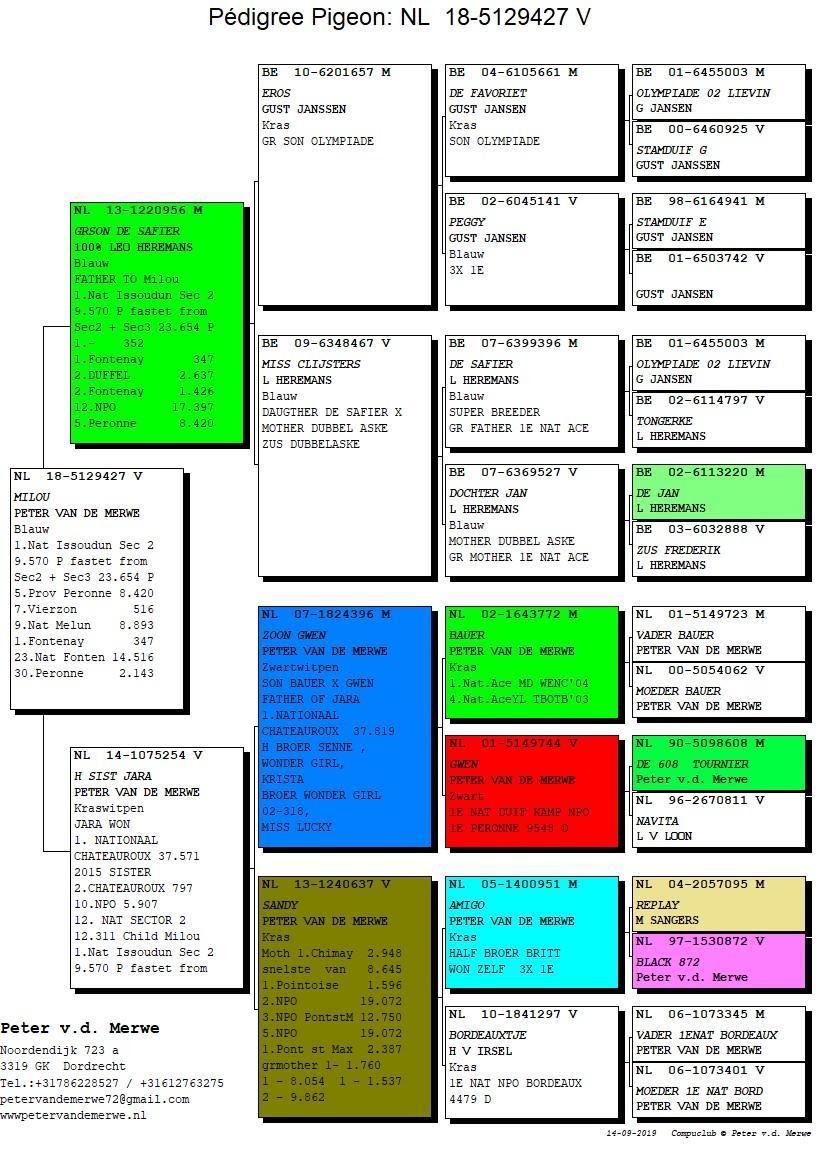