It is about a year ago that I used a title that many did raise their eyebrows namely ‘we haven’t seen everything yet from Grégory Demaret’ …..

With the results that were set then on provincial, national and international level we expected more a tiny improvement, more than a progression. When you’re climbing to the highest rankings it is getting more and more difficult and going back down is the most obvious way to go.

But that is without taking the willpower from Grégory into account. An uncurbed willpower and perseverance coupled to a strong team of pigeons seems to be a formula that works and is giving results.

First things first…there is the name change. Where they raced until the past season on the name of Grégory himself, they changed it in 2020 to the tandem Demaret-Marichal. Thierry Marichal, since years the contact- and counsellor for Greg, was already active behind the scenes as adviser and deliverer of pigeons for the breeding loft. Thierry, who is sportive director of a cycling team, can’t make free time that is necessary to keep busy in a serious way with pigeon sport, has taken on within his time frame a big part of the breeding. It is a win-win situation, Thierry can test out his breeding pigeons at a strong racing fancier and Grégory can partly make use of the breeding source from Thierry and don’t have to keep busy too much with the breeders. Also in a matter of the sport itself and vision they are at the same pace.

Staying on top of things

Towards the season we called each other now and then. Don’t call it discussing but feeling how we would or could prepare the extreme long distance in this Covid19-season. First there weren’t any races or program, then all of a sudden there were and it became a steaming program with more than one race in the weekends on the same day.

No evidence to prepare something like that well organised. It was clear that Greg took on the tactics ‘hold your horses’. As long as their was no clarity about when the program could be taken on, the horses (read pigeons) were being kept short. They did watch over the condition and base health and gave them a certain training intensity, but this was without exaggerating or getting into it full speed. The pigeons got their necessary vaccination (also a vaccination against parathypoid) but were being darkened as long as possible. And they also choose not to race the Rhone Valley races seen the heavy program.

Those who placed their focus on the short, middle and long distance needed to get their pigeons ready a bit earlier, the extreme long distance racers needed to wait even longer. And this is what Greg can do as one of the best, he can bite on his teeth when necessary and act like a sniper…and this patience was being rewarded very rich full.

The darkening was stopped rather late and then the pigeons were being prepared for the bigger work. A lot of training races and middle distance kilometres were done to get the routine in them…and this seemed to work. The trainings intensity was being increased and their shape came at the exact right moment…and this resulted in results. 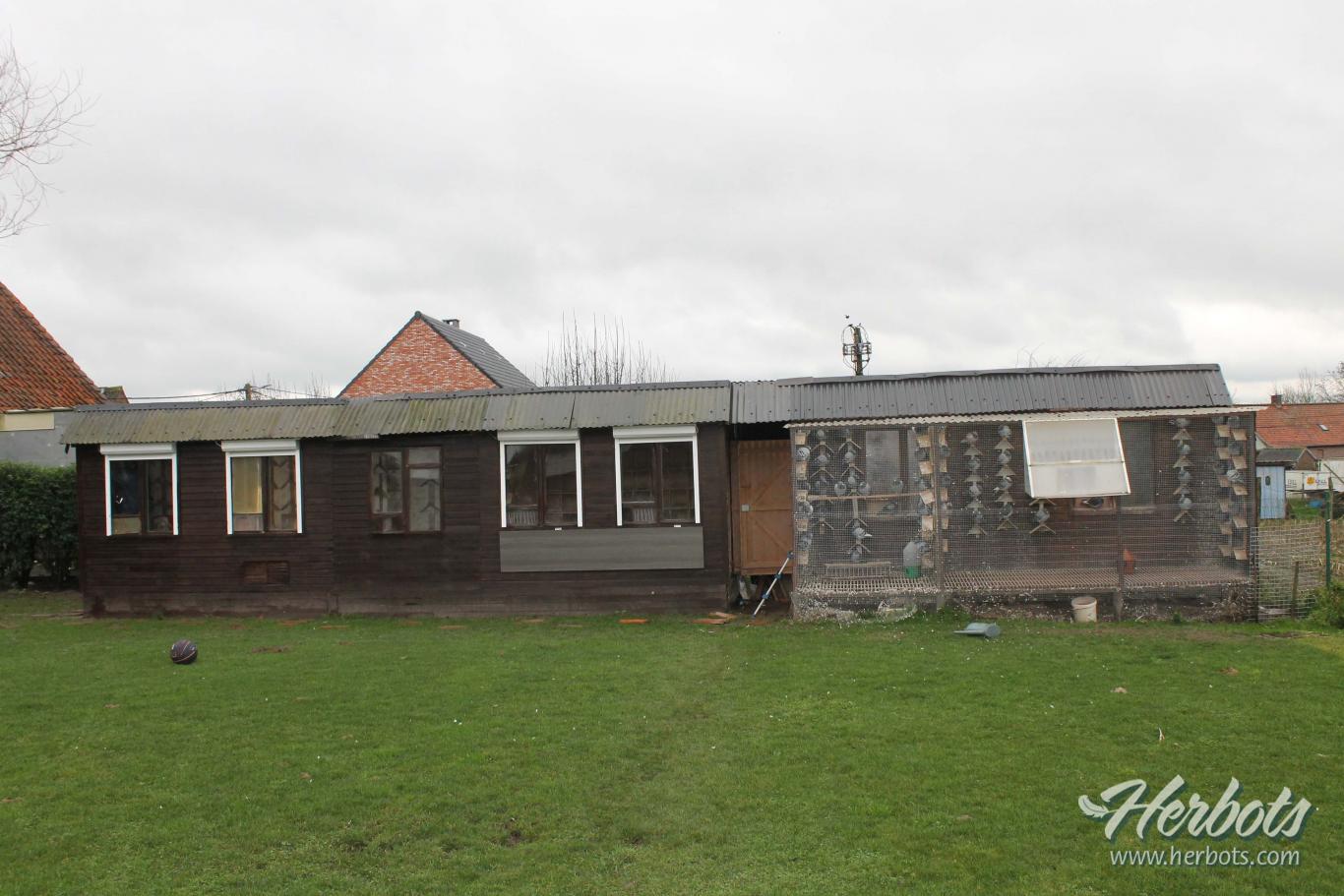 Which made us glare last year and the years before at the results that were set, the season 2020 made it all vanish in nothing. Underneath an overview of the top results (top 100 national and international) on the extreme long distance races:

Shine on Narbonne and Barcelona

The outliers of the years are off course the 2nd National Narbonne year birds with a hen and the 5th National Barcelona on the very heavy edition of 2020. It is the first year that they raced hens and this as a test to see whether they could get head pigeons with this game.

On Narbonne it was quasi a hit in the rose with a super yearling hen that almost took care of a stunt and was only beaten by the international winner from Yves Van De Walle out of the nearby village Mont de L’Enclus. 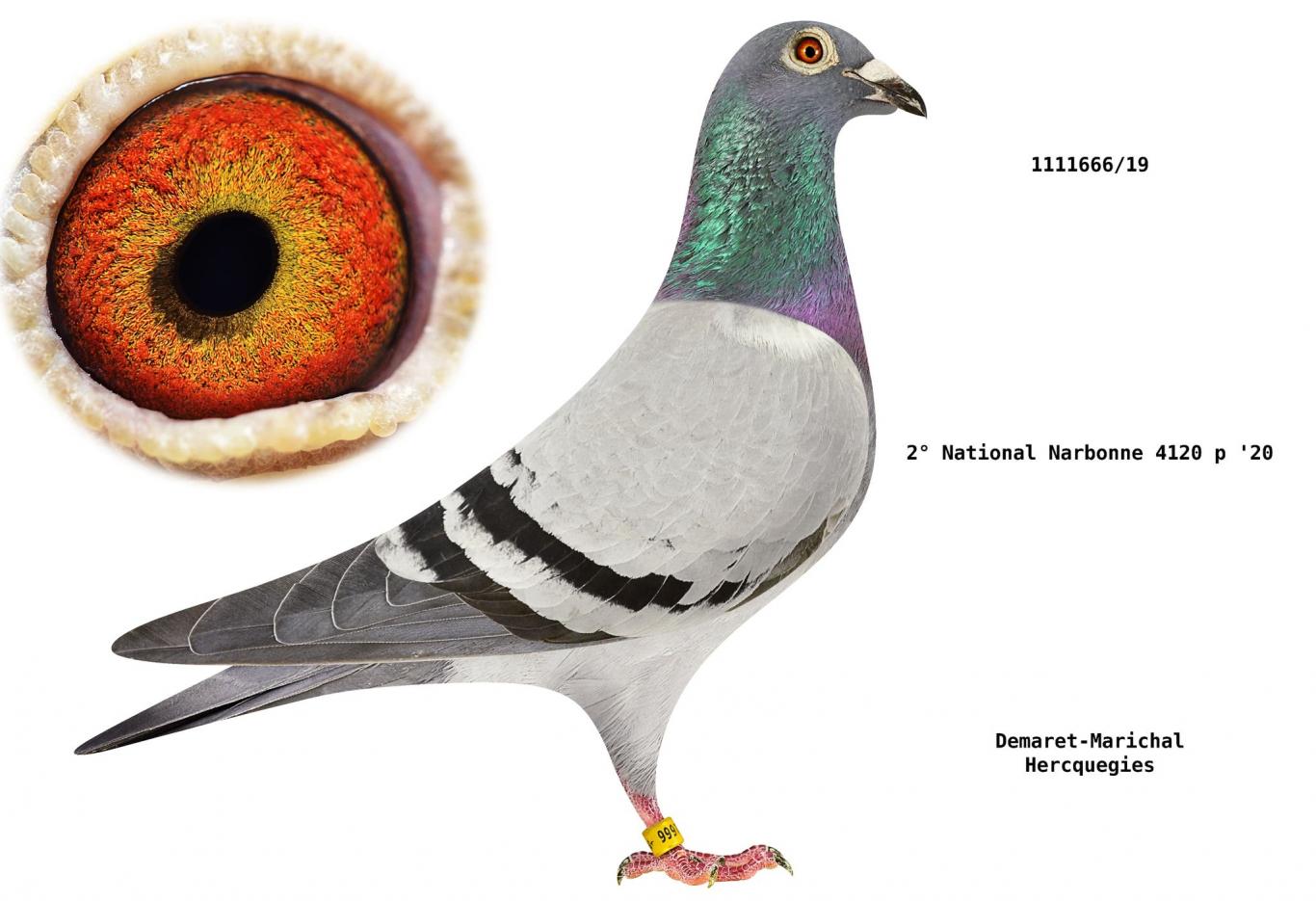 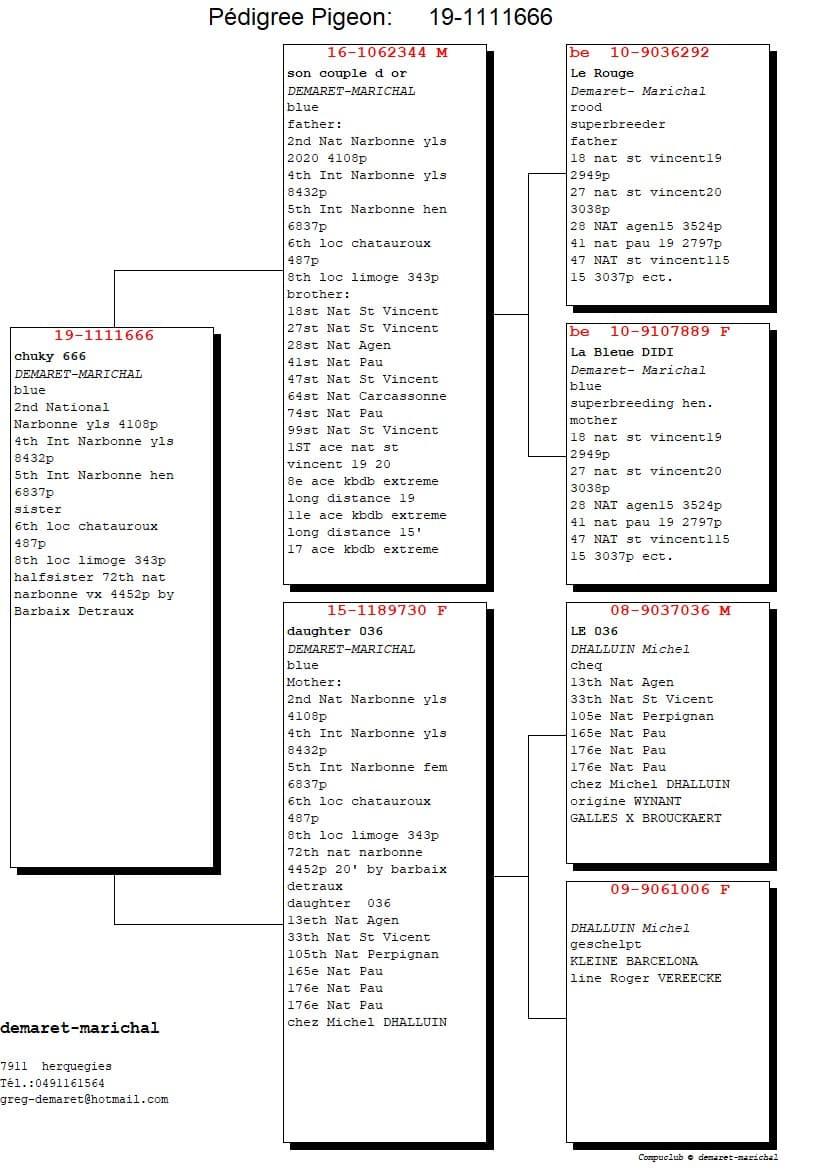 But on Narbonne it was a true festival of pigeons that placed themselves in the top of the ranking. Narbonne is for Grégory the race of the races and loaded all his munition he had on this beautiful international race.

Both with the year birds and with the old ones they raced 4 pigeons within the first 100 national or in other words 8 pigeons in the top 100 national. Impressive ! 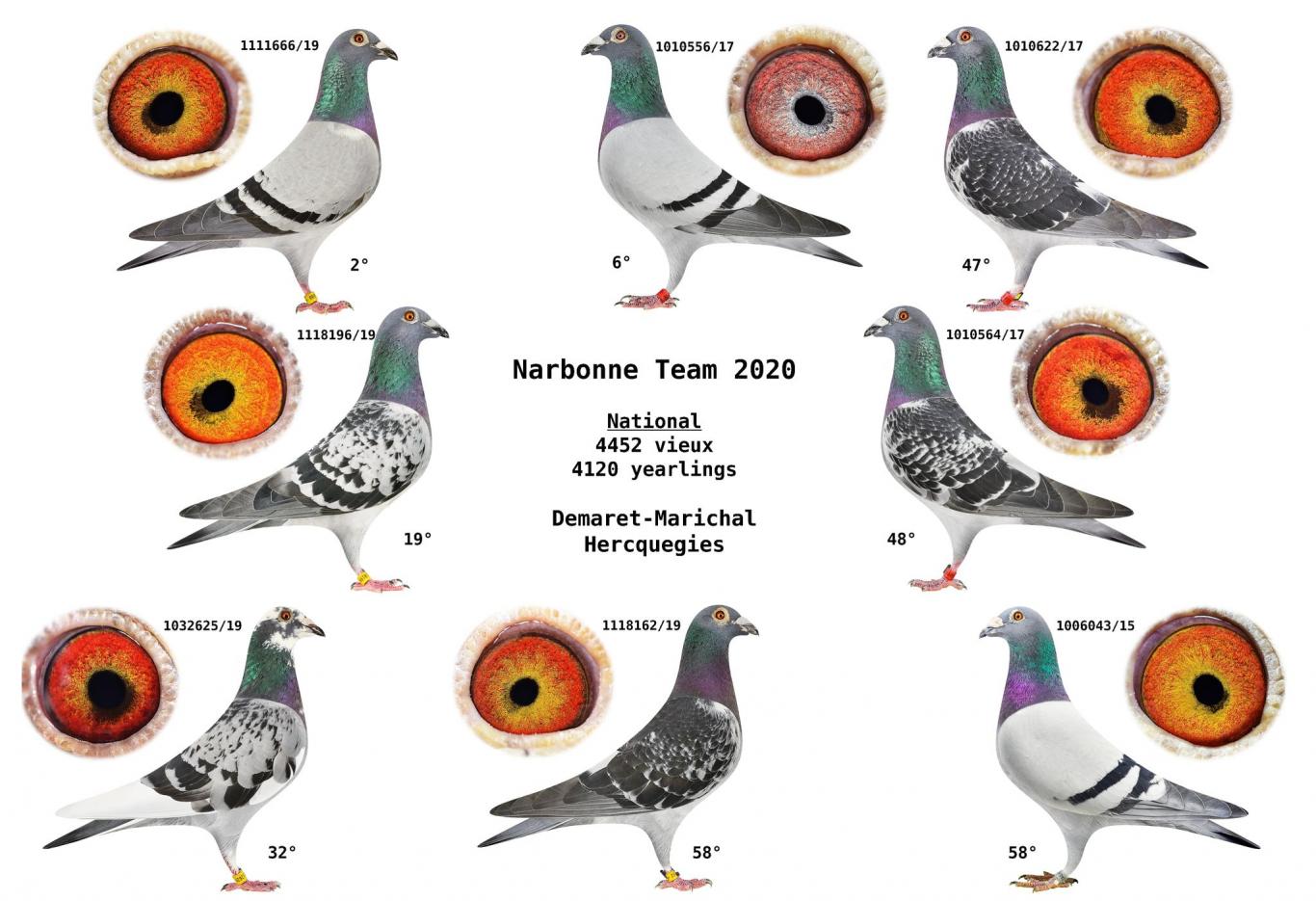 On the very heavy Barcelona it was ‘Matteo’ (BE16-1072511) who took care of the surprise and won the 5th national and the 19th international. This 4-year old cock came home after this very heavy race without any signs of exhaustion, a proof of the toughness of the pigeons from Grégory. 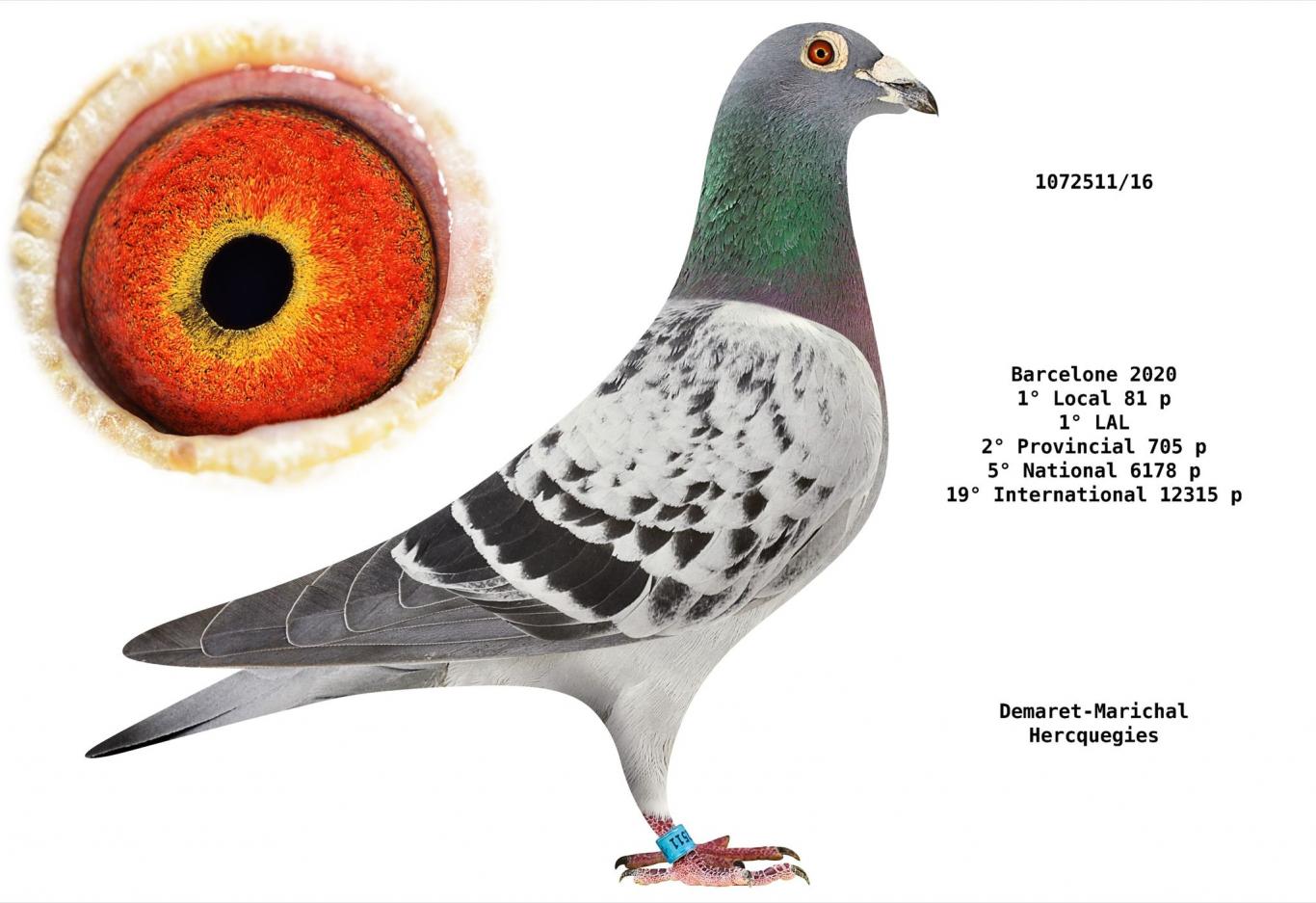 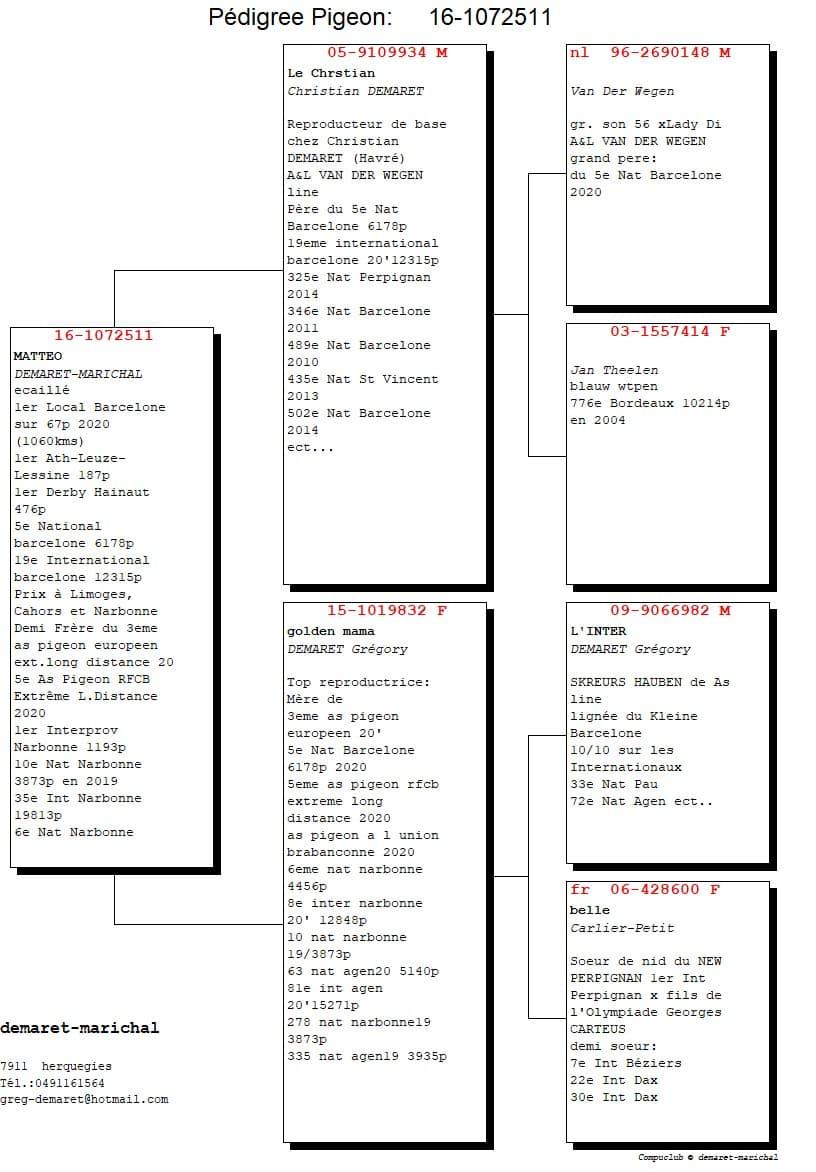 Matteo didn’t get it from any strangers. His father is direct from the loft of Christian Demaret from Havre. Christian won two years ago the race out National Perpignan. The confirmation of the strength of this pigeons from Christian that are stooled on the Dutch long distance strains from Vanderwegen and Aarden. The mother is one out the own old strains from Gregory.

These pigeons set an unbelievable result…but these aren’t the only top pigeons on the lofts in Herquegies.  Next two cracks can’t be forgotten on the stage namely 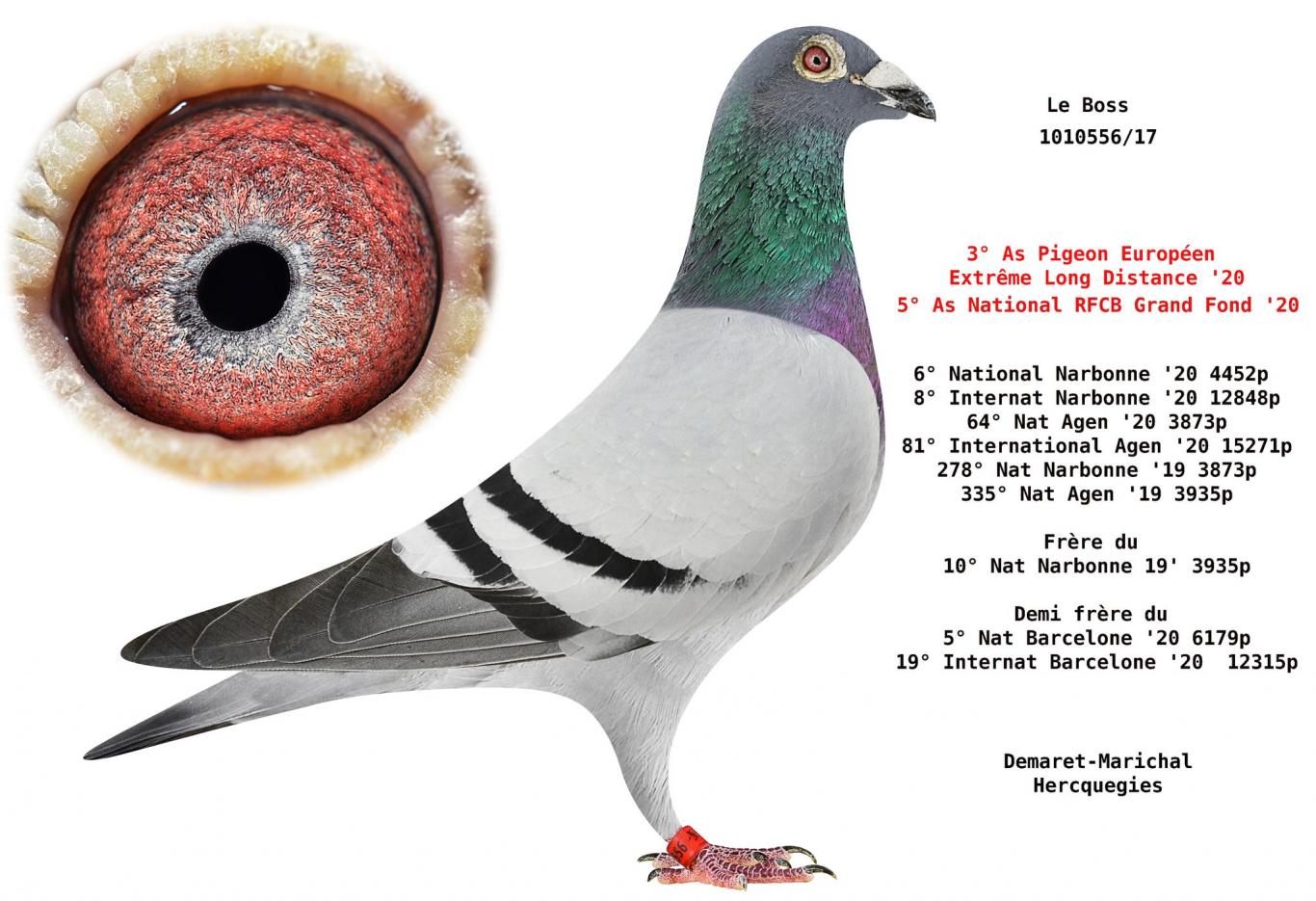 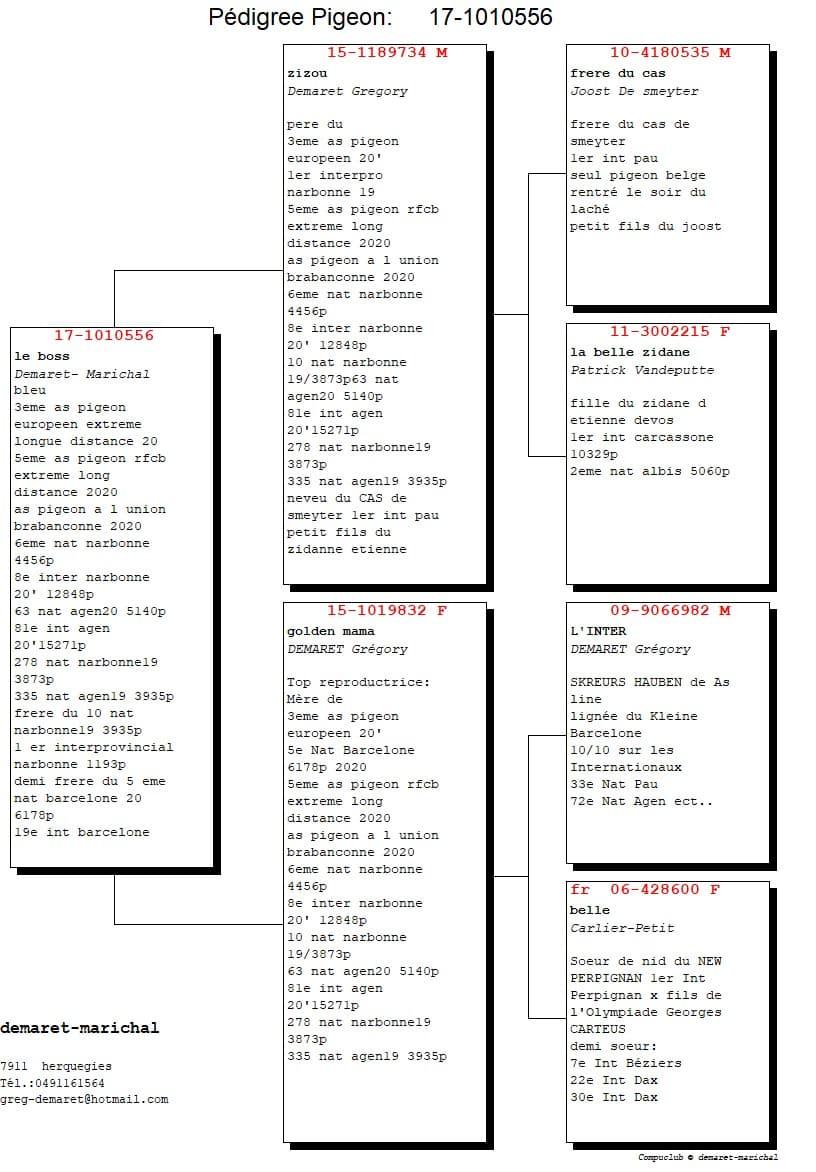 This crack pigeons won in 2020

He has a 5-star origin. His father is a son ‘Brother Cas’ (De Smeyter-Restiaen, ‘Cas’ won 1st international Pau) coupled to a daughter to the famous ‘Zidane’ (Etienne Devos) via Patrick Vandeputte. Mother is the ‘Golden Hen’ or a crossing between cock Schreurs-Houben x Hen Carlier Petit. 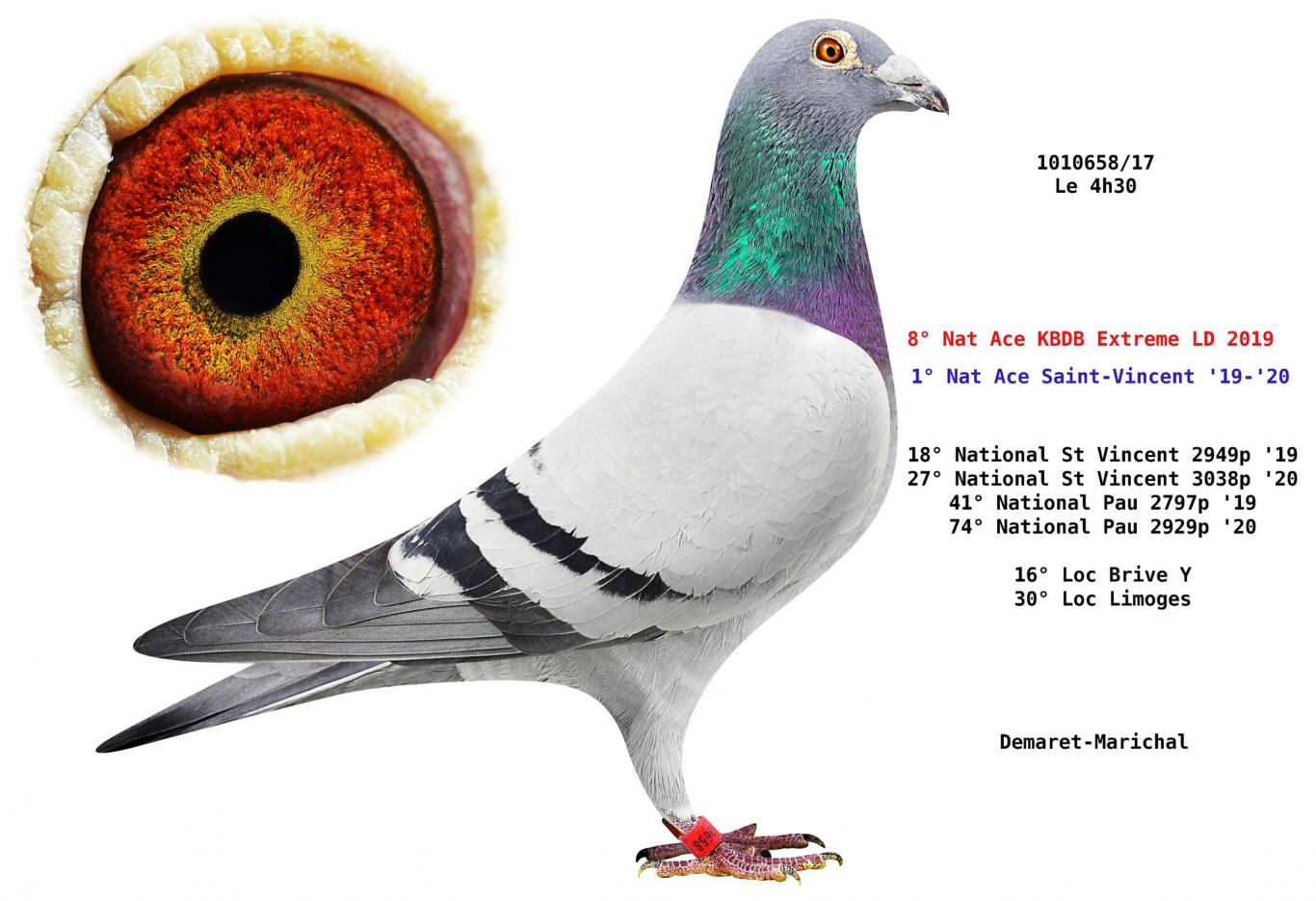 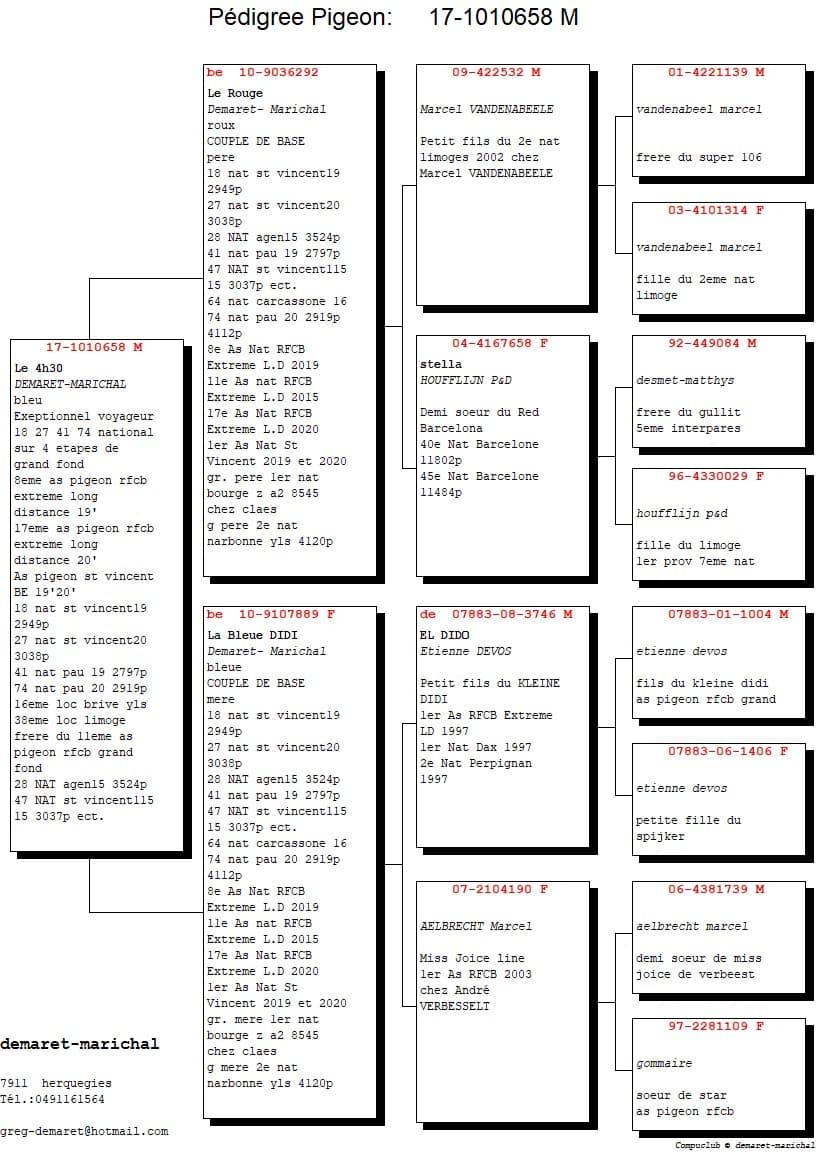 This one was able to assemble underneath palmaris :

In his pedigree we find the base couple from Grégory namely ‘Le Rouge’ (Marcel Vandenabeele x Houfflijn Patrick & Dimitri) coupled to a top hen out of a crossing strain ‘Didi’ Etienne Devos x Marcel Aelbrecht.

This golden couple is to be found in almost all base breeders from Grégory and what they dropped on children and grandchildren on a national and international level is more than impressive: 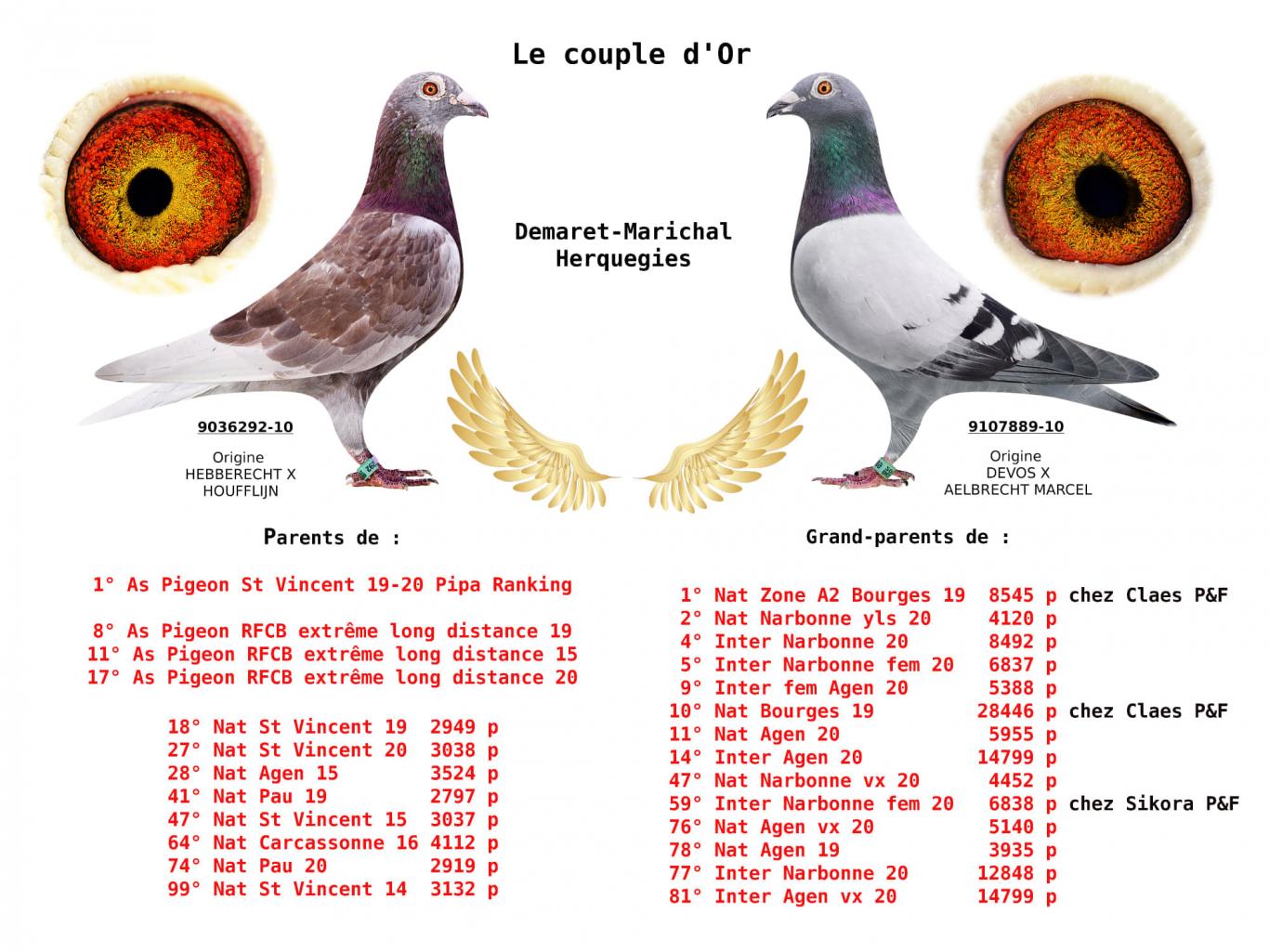 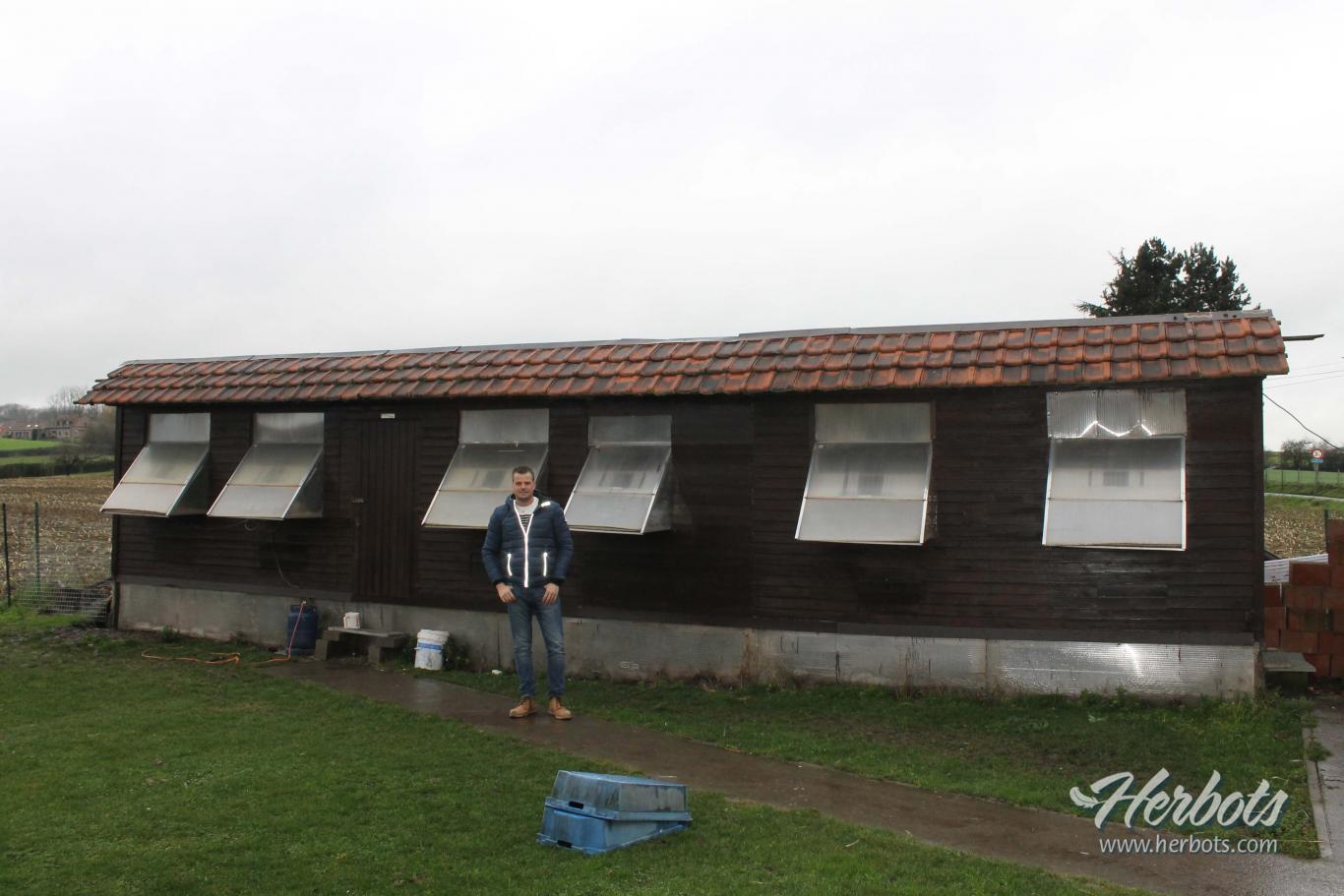 A warned man is worth two !

We could fill a few more pages with a few top pigeons and results out of this extreme long distance colony, but we like to limit us to the tops of the past season.

The ambition keeps on burning to make progress and to improve these results. This isn’t an evidence as the extreme long distance also brings in bigger risks on losses or disaster races. The selection remains extremely hard on the lofts in Herquegies. It isn’t a coincidence that there is a saying hanging on top of the door “vaincre ou mourir” (win or die). This Spartan selection separates the wheat from the chaff in an honest way.

The widow cocks proved and exceeded what they already had proven in the past. First they had a test session with the hens on the extreme long distance and also that was an unexpected success with a 2nd National Narbonne.

Due to the cooperation with Thierry Marichal they got a new strain on breeding blood that also doesn’t know its equal within the long distance world namely this from top loft Joost Desmeyter.  The chance is big that this also will give a quality injection to this pigeon team.

But be warned…a signal that isn’t that striking amongst the other results but is very meaning full towards the future. The year birds are being raced as a ‘father’ on chapels in an aviary. Goal is to get them as much as experience as possible to be able to shine as a 2-year old. On Brive national with the year birds they basketed 12 pigeons and these raced 12 prizes out of the 12 national starting with the 80th sport. Without any form of motivation these pigeons showed that they have it all to be able to take on the heavy work and this hopefully as from the season of 2021.

A very promising signal towards next year. This quality coupled to the unbridled effort from Grégory will show many beautiful things in the future. In the meantime it is enjoying the marvellous results.

A big congratulations on the extra ordinary season of 2020 from the Herbotsteam ! 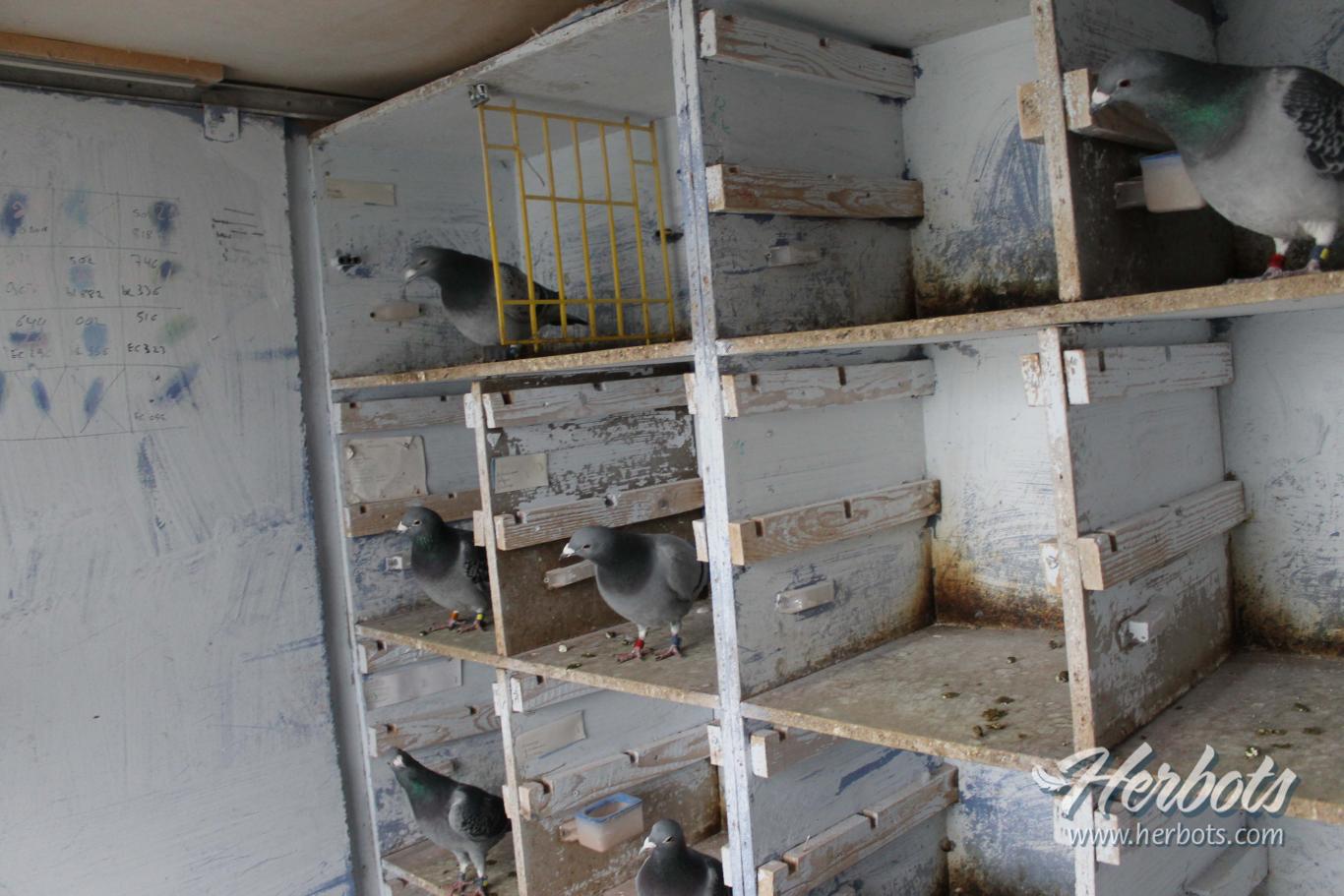 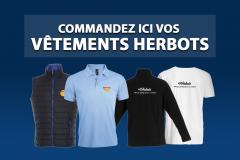