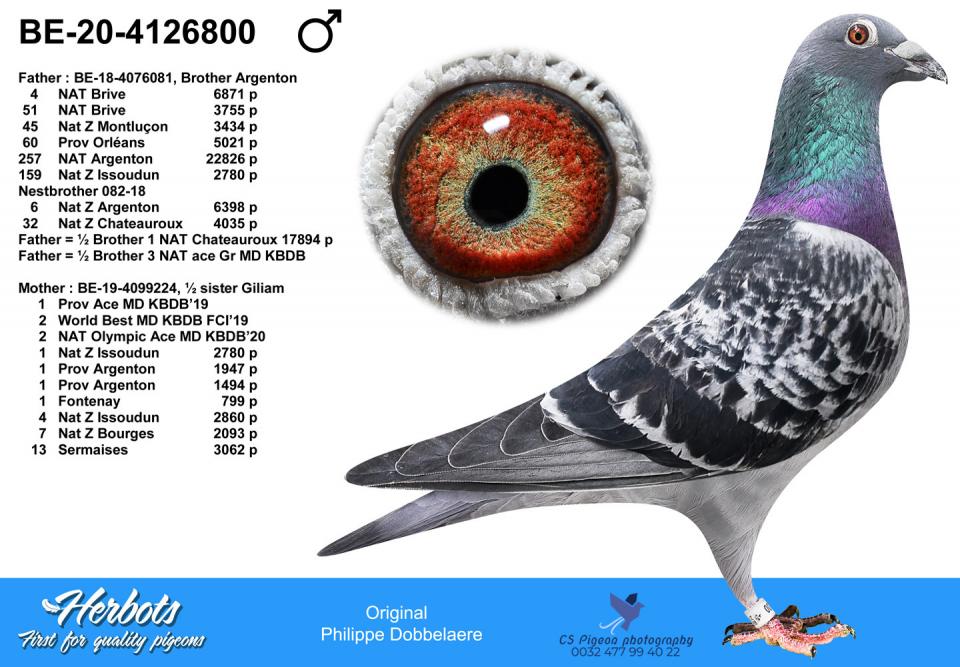 Olsene: It is going hard at the Dobbelaere house in the Nieuwlandstraat 30 in Olsene. The past 2 weeks they won 3x 1st provincial, 1x 1st National z Issoudun and 1st National Libourne, this next to the already impressive palmaris. And for you information…this national Libourne is already the 3rd national victory for Philippe. Before he already won 1st National Chateauroux ’14 against 17,984b and the 1st National Jarnac ’16 against 3,904b.

National Libourne winner is top pigeon “Robin”. “Robin” (B18-4076071) is a character full blue cock, average build…and a real racer as he won a few weeks before also the 5th National Limoges against 10,783 year birds and is with this in pole position for 1st national ace bird KBDB year birds (and this with 2 more races ahead). The nice thing about this victory is that he, with no less than 8 full minutes, left all the other Libourne racers behind. The ones who can do this in this kind of severe weather circumstances is a pigeon that needs to have pure class.

The national victory of “Robin” drew naturally all attention but even class full was the result of “Gilliam”. “Gilliam” - B18-4076038 - won on the 13th of July 1st prize provincial on Argenton against 1,947 year birds and now one week later, on the 21st of July, ‘Gilliam’, won the 1st National z Issoudun against 2,780 year birds !

Philippe learned all the tricks from his father Roger in Deinze and he already had amazing pigeons on his loft. With national head prizes on Angoulème and La Soutteraine Philippe experienced what is like to make it to the top. He went back and forward between his house in Olsene and Deinze for a while, but he wanted to be his own manager on his own loft. His wife Maria thinks that he was already thinking about the construction of a pigeon loft when they were just first building their house in Olsene. The pigeons from his father are at the base of his current colony. These were accomplished successfully with pigeons from Kamiel Vanwijnsberghe, Sylvère Toye and Andre De Smijter. He also bought a hen at the total sale of De Rauw – Sablon which gave him good off spring. On a regular base Philippe is looking for the smaller fanciers with good results out of his own region. They co-breed together and in many cases with success, you don’t always need the ‘big’ names to be able to get top pigeons.
The lofts are really nice and well taken care of. He has lofts above his garage and a row of garden lofts. The youngsters reside on the garden lofts. The widow cocks live on the lofts on top of the garage (who especially do the 600km races) and the racing hens.

He started off the season with a team of 37 widow cocks and 20 hens. On the long distance races he makes use of the classic widowhood and at basketing the cocks and hens can come together for about 10 minutes. At arrival from a long distance race they can stay together until the next day.
Early this year the cocks raised a couple of youngsters. End of March there is a second coupling and could stay on eggs for a few days. The 20 hens on the greater middle distance races are raced on total widowhood. At arrival the long distance races get a sports mixture accomplished with some diet. Proteins will be added to the food and electrolytes are to be found in the drinking water. As from Mondays on they get a mixture Gerry Plus + Relax + Super Start. When basketing on Wednesday it’ll be as from Sunday on 50% sports mixture + 50% diet. The last few days they get an energy rich mixture. Before the season takes off they treat against trichomoniases. Before basketing for Limoges they were also being treated during 2 days against tricho. The long distance racers also get a yellow drop in the nose. They didn’t get anything yet against airways diseases. The eye drops from Comed are being given at basketing and at arrival.

Philippe...once again a big congratulations from the entire Herbots team.