Van den Abbeel - Van Paesschen from Lebbeke shine in 2019 with Remco and Eden !

After 2 super seasons in 2017 and 2018 they started off  the National races young birds as top favourite. From the first races on the youngsters came home as a train and the pressure on this colony became bigger and bigger to make it happen. Who is able to set a stunt that has never seen before under this kind of pressure can only be a top fancier who is able to give that little bit extra to his racing team just at the very last moment. 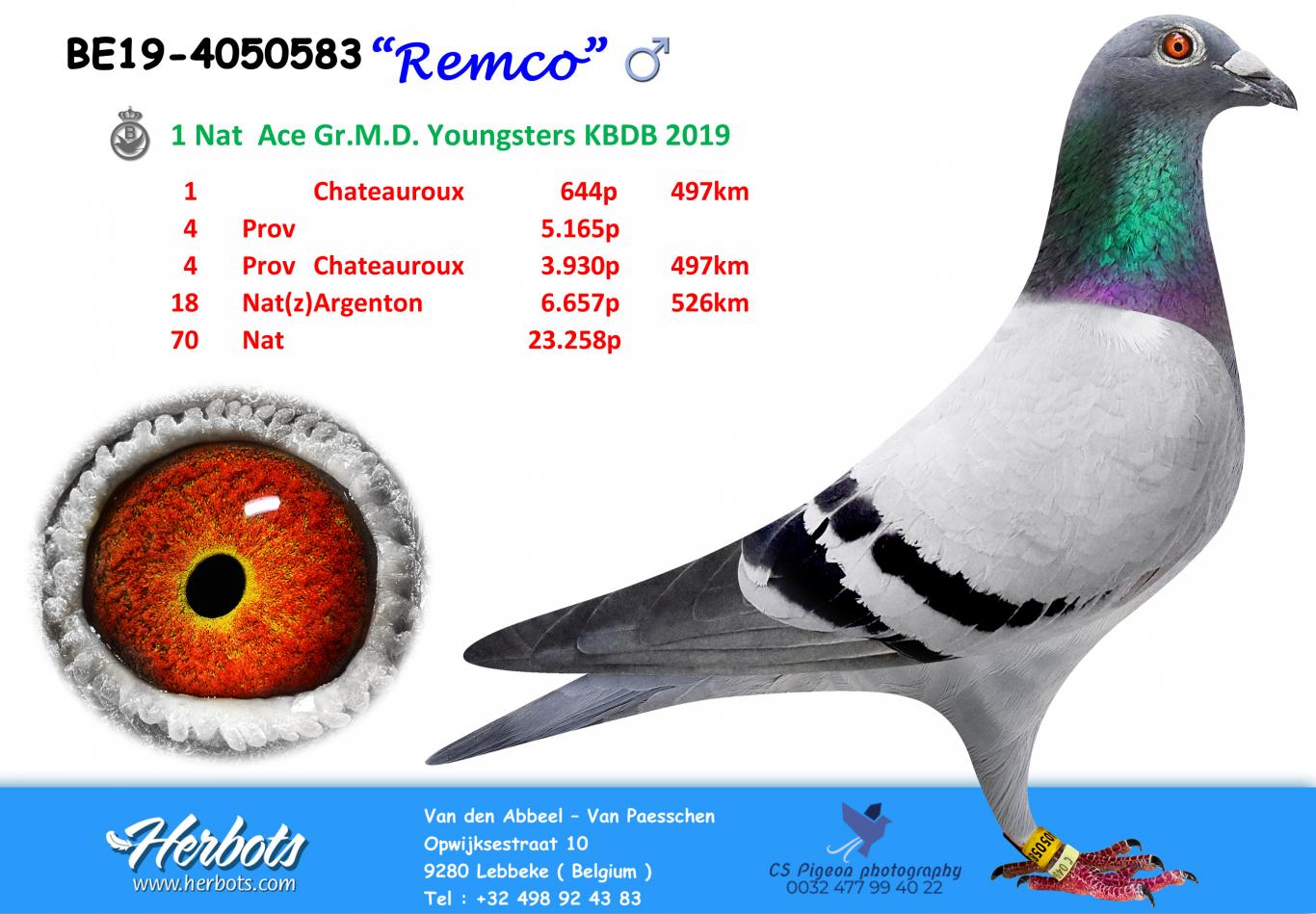 The only chance to get something out of this family. 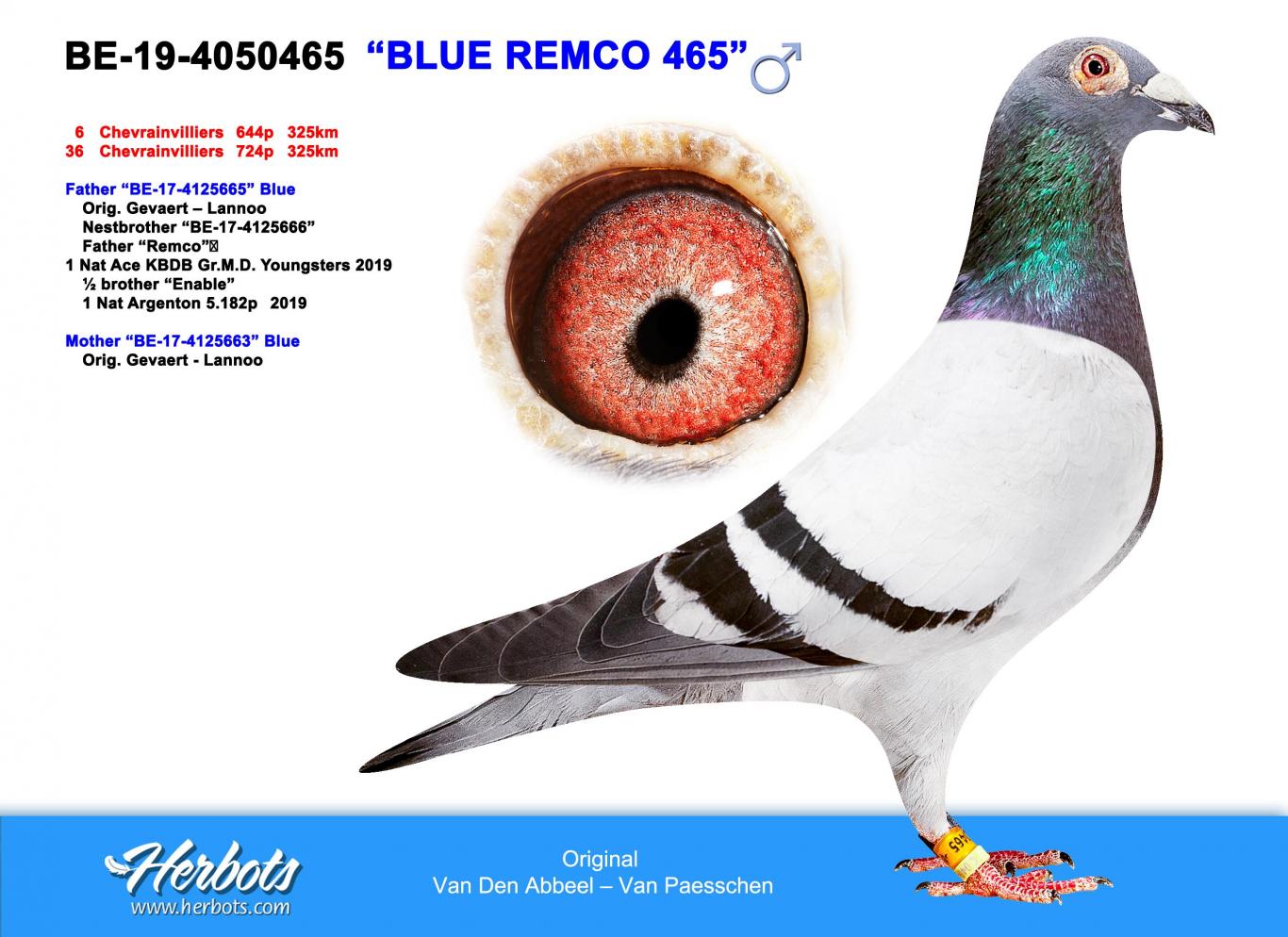 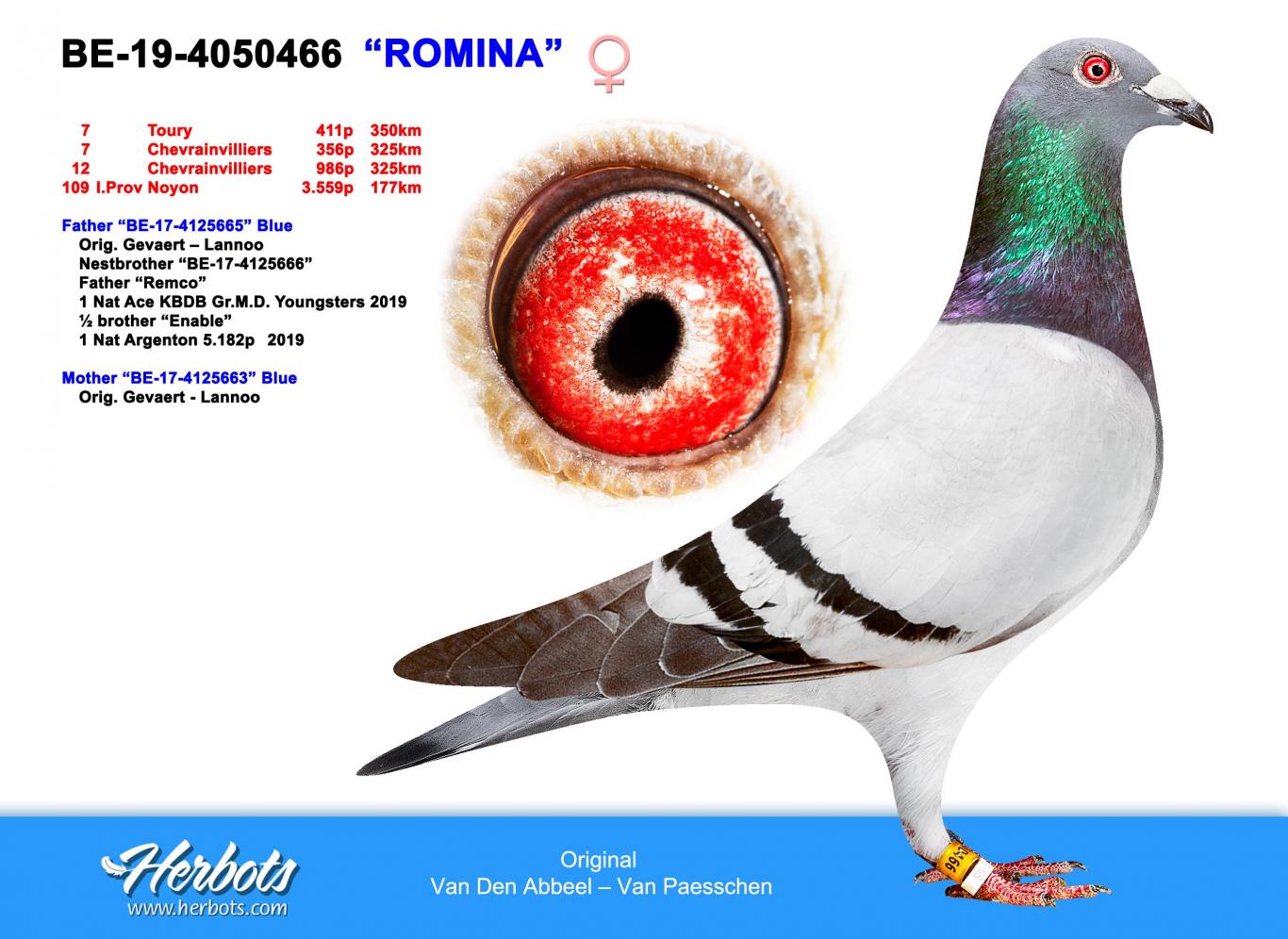 These are 2 children out of “Nestbroer van vader Remco” (nest brother to father Remco) who is also a 1/2 brother to the 1st National Argenton 2019  won at Gevaert – Lannoo. The golden breeding blood that took care over here in Lebbeke for the set successes.

The other top pigeons is “Eden”,  his nest sister “BE 19-4050485” can be found in this auction, a super beautiful hen that everybody can use at his breeding loft. You can find her as the very first pigeon in part 1. 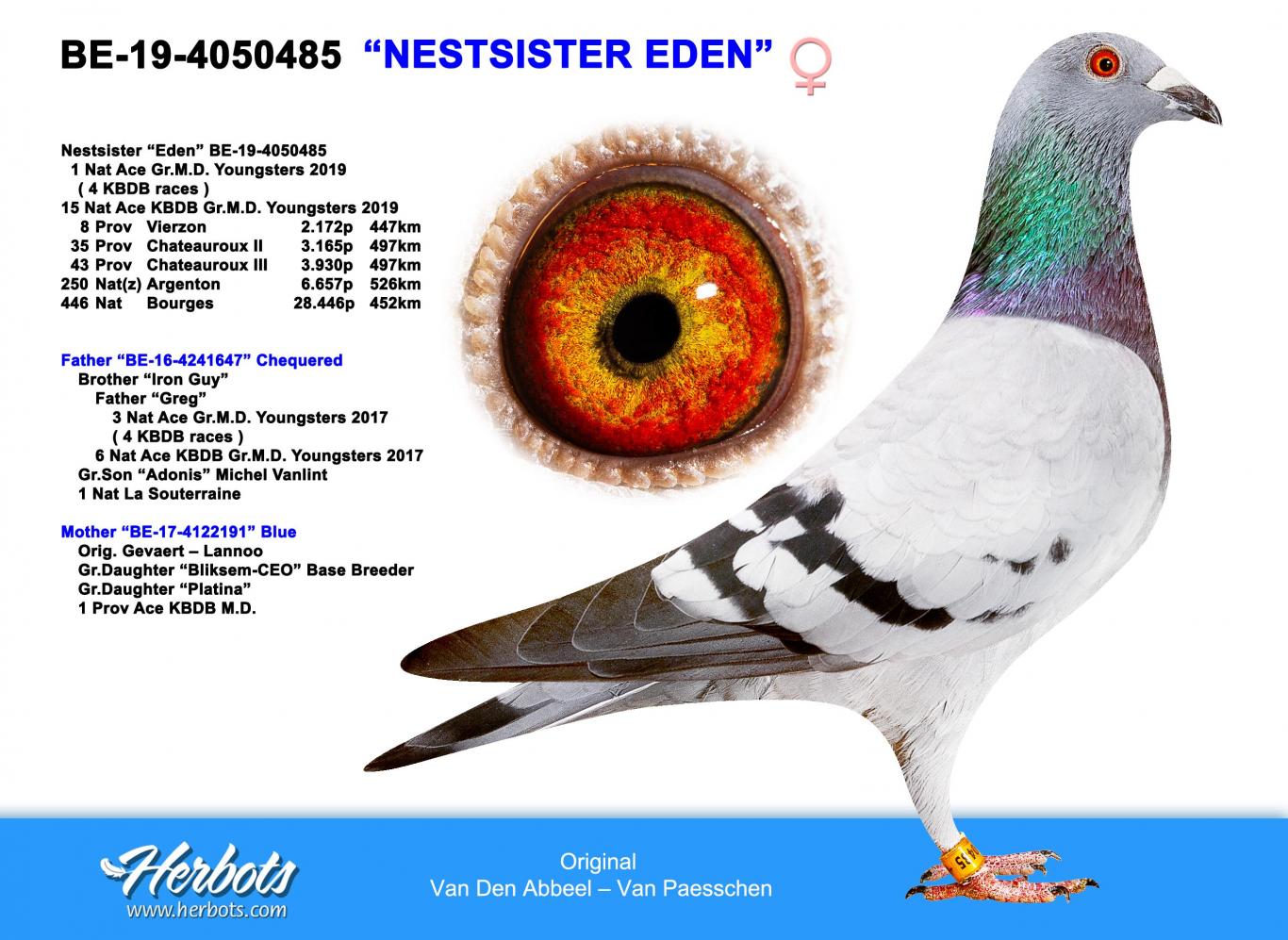 Father is “Broer Iron Guy” (brother Iron Guy), “Iron Guy”, a real super breeder who is a son to the old base breeder from Peter Trost coupled to a hen from Michel Vanlint.

Let’s start off with the old breeding couple from 2010, they were bought as first pigeons from the strain of Gevaert – Lannoo. They still fertilize and in 2019 direct children and off spring took care of top results.

Mother is “BE 10-4275475” Sister Alonso
“Alonso” became 3 Nat Ace bird MD KBDB and “Alonsa” won 14 Nat Argenton 13,629b
She is on her turn a granddaughter to ‘Chateauke” the base breeding hen from the Gevaert – Lannoo colony where they continue building on here in Lebbeke.

Together they are the parents to

She especially shined on the race above the 300km. Heavy weather is her thing and those who want to shine next season needs to bring this top hen onto his breeding loft. 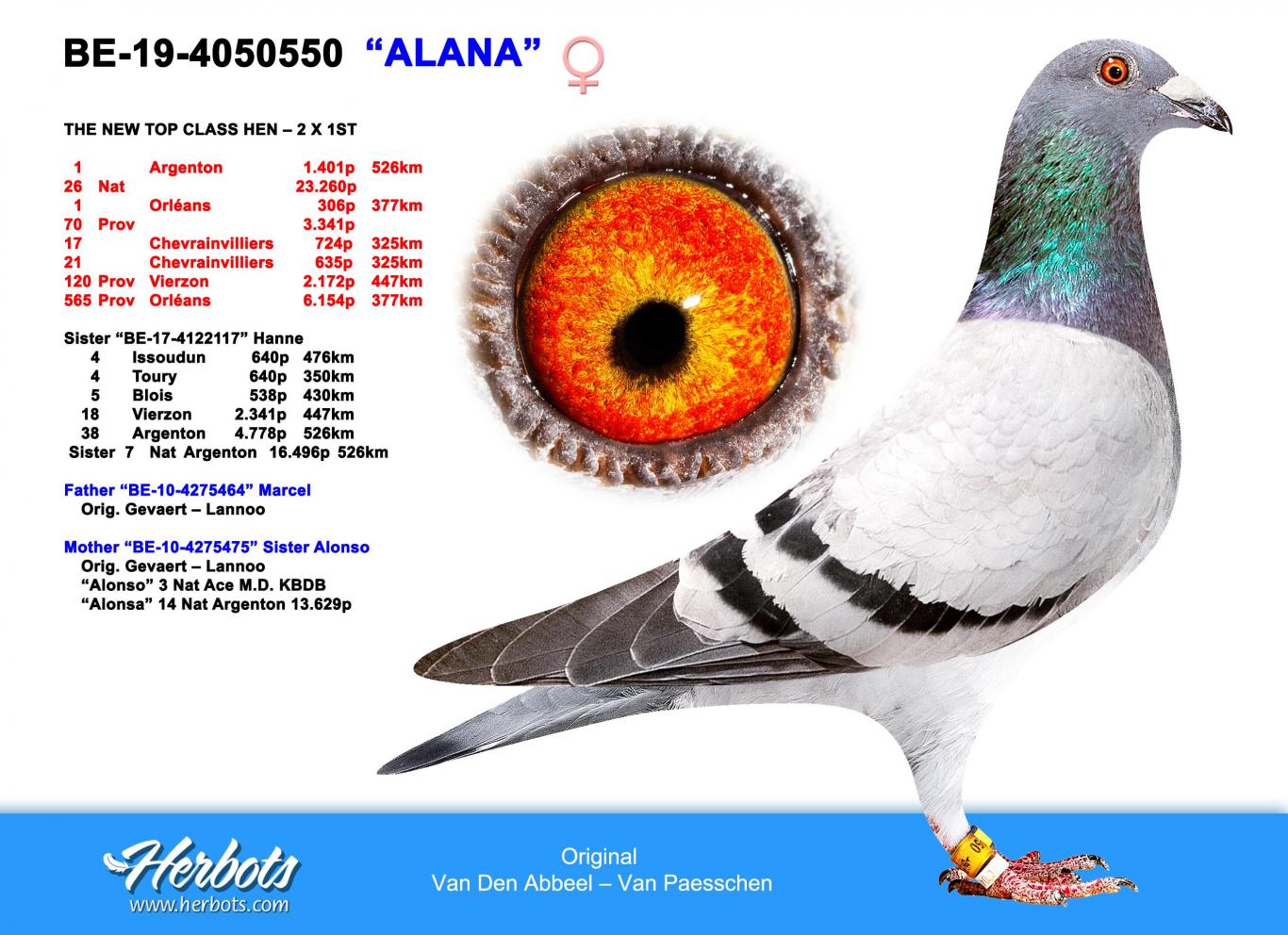 This top cock raced 4/4 on the national races and won on top of this also head on Orléans and Vierzon. Many kilometres and a high rhyta isn’t any problem for these pigeons. 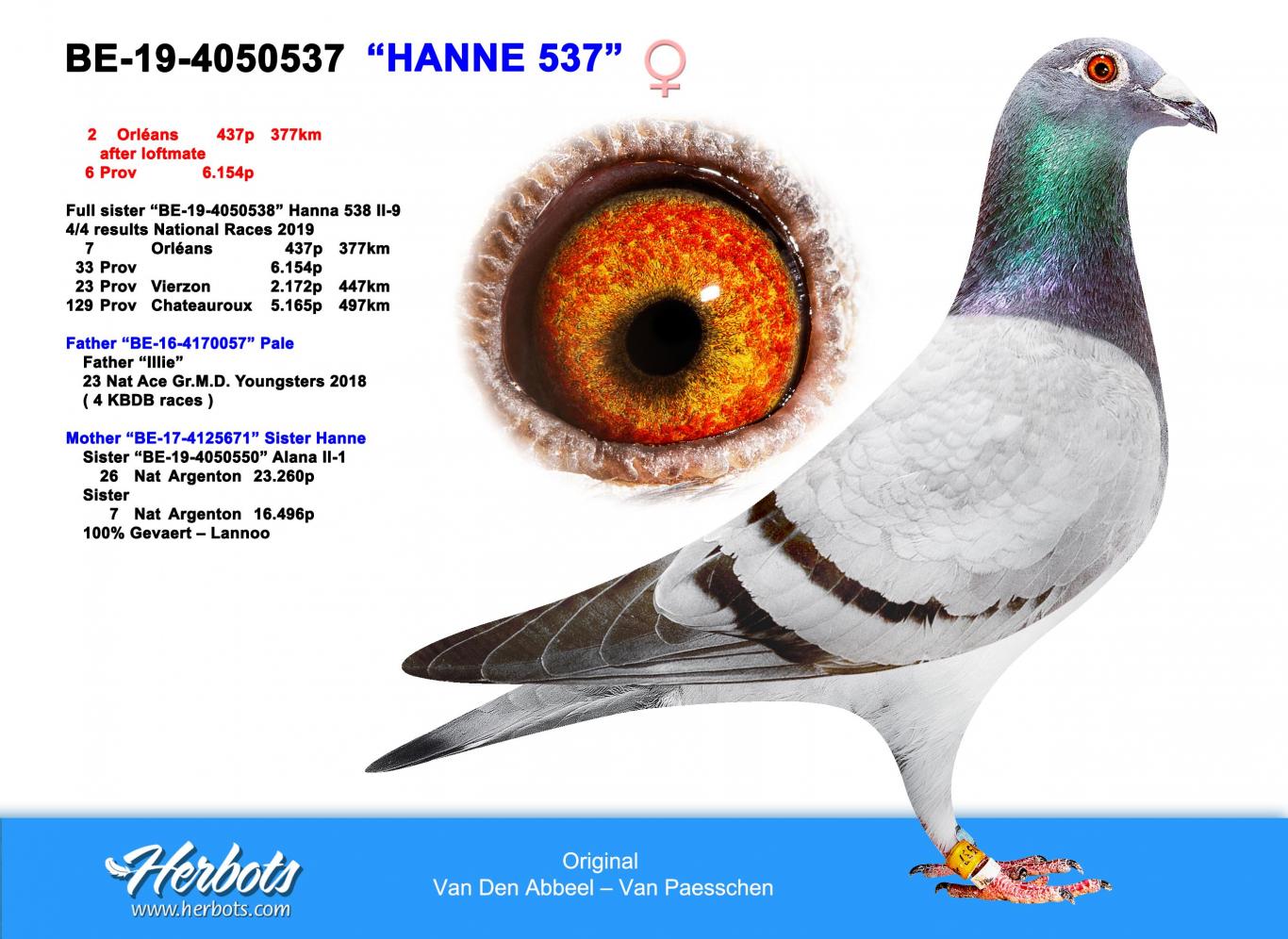 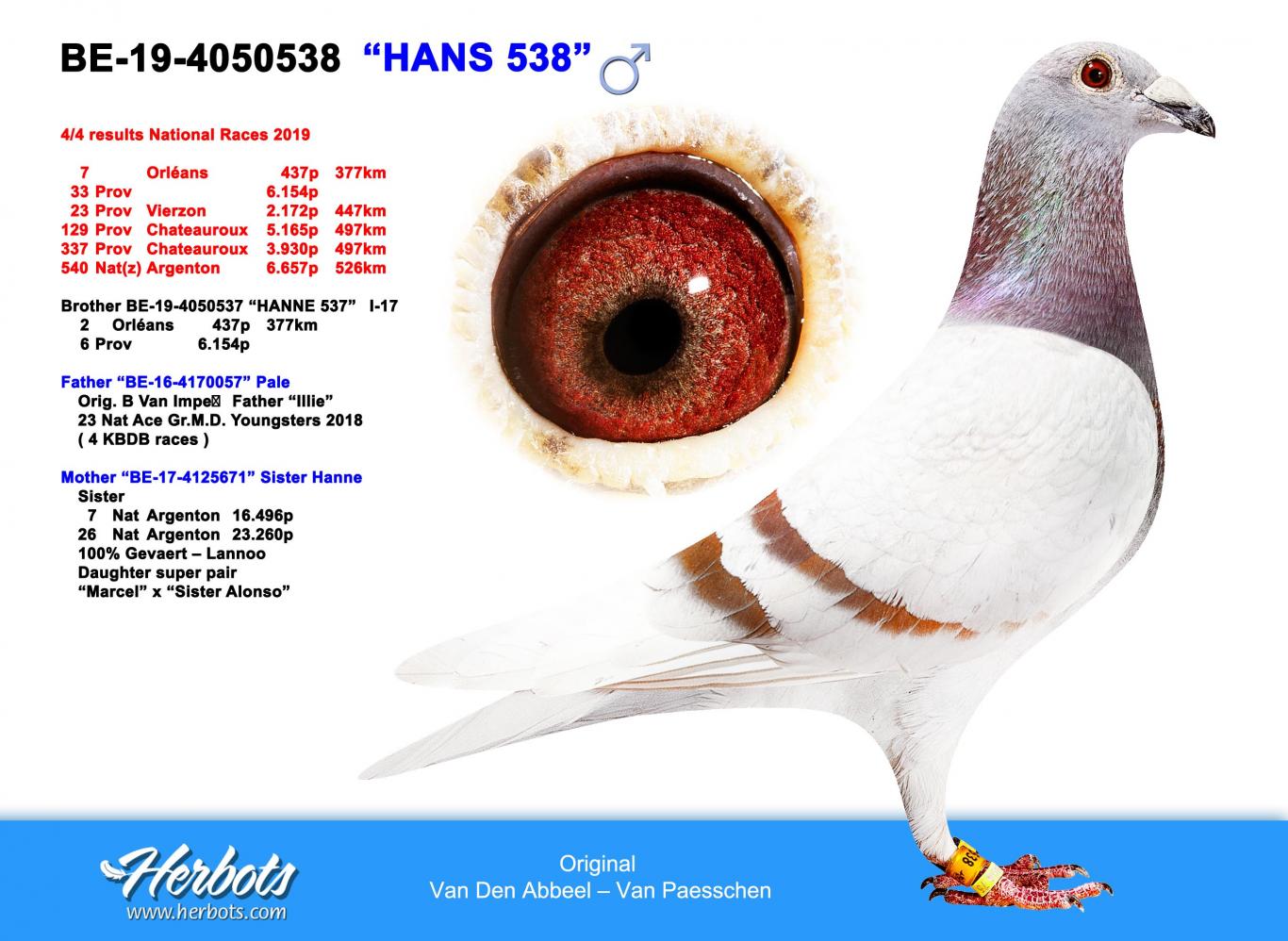 So breeding and racing is what this family can do, the oldest full brother to them is “BE 16-4176333” Brave who is at the breeding lofts in Lebbeke and who became father to ao: “BE 19-4050443” Blue Hanz. He became 1st Ace bird Middle distance this year and only raced these races but with a lot of bravura.

He on his turn showed himself on the shorter races up to 400km, they can handle them all as in 2018 a child out of this couple became 7th National Argenton against 16,496b.

The last two racing hens we want to introduce to you are 'Red Girl' and 'Julie'.

Father is from Bert Van Impe and mother is again a Gevaert - Lannoo pigeon, granddaughter to 'Bliksem Gaby' with again the best blood to be found in this colony. 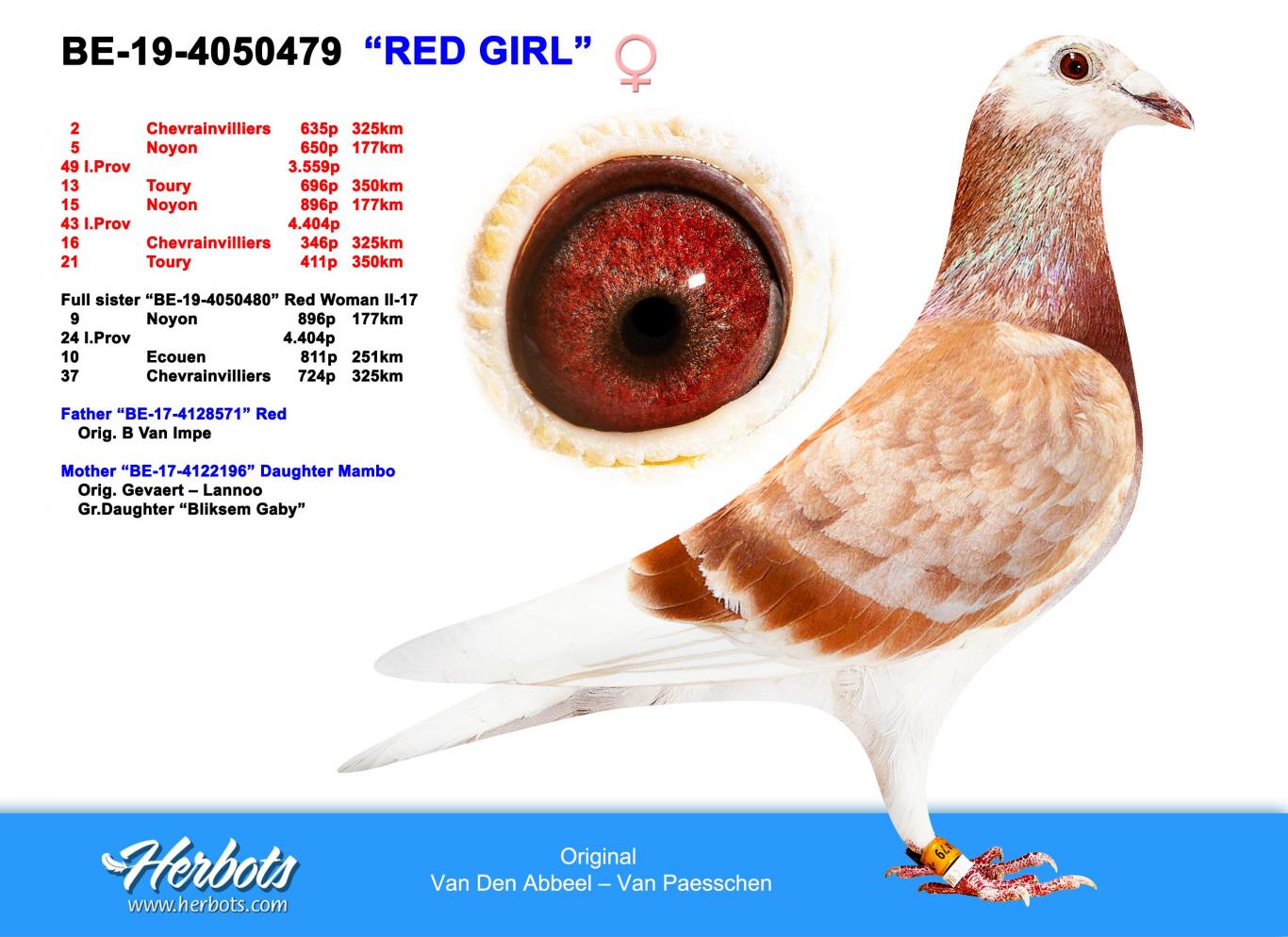 She is the nest sister to “BE 19-4050573” Juliana, who will race next year as a yearling hen on the loft of the young birds and already became 2nd Provincial Ace bird Middle Distance youngsters KBDB this year.

Father is from Willy Francois but has 50% Gevaert - Lannoo blood

Mother is a direct Gevaert - Lannoo and is a direct daughter to 'Platina' 5th National Ace bird middle distance KBDB ! The golden vein from the tandem./ 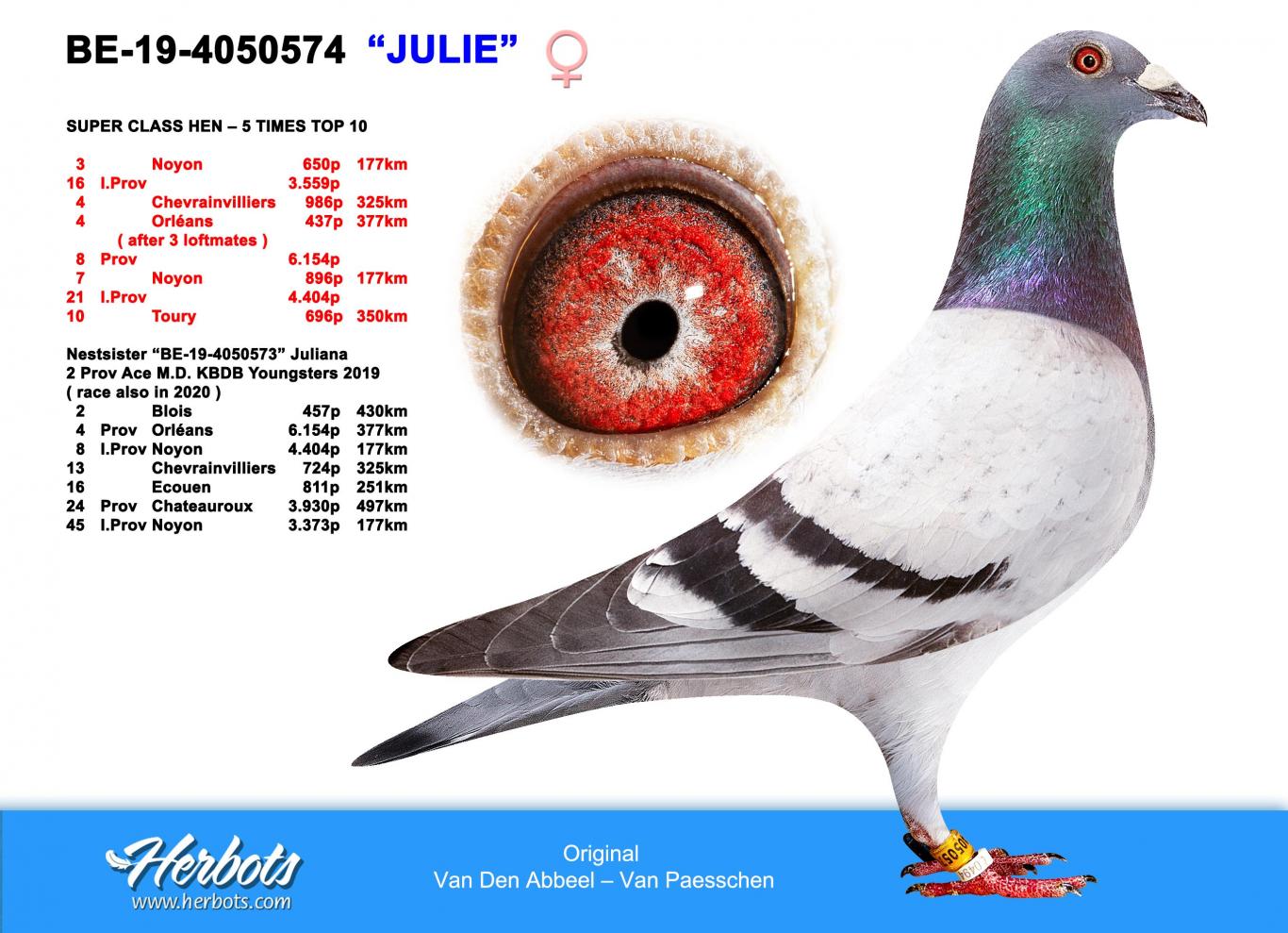 The last 2 pigeons we would like to introduce are 2 direct children out of the old base breeder. 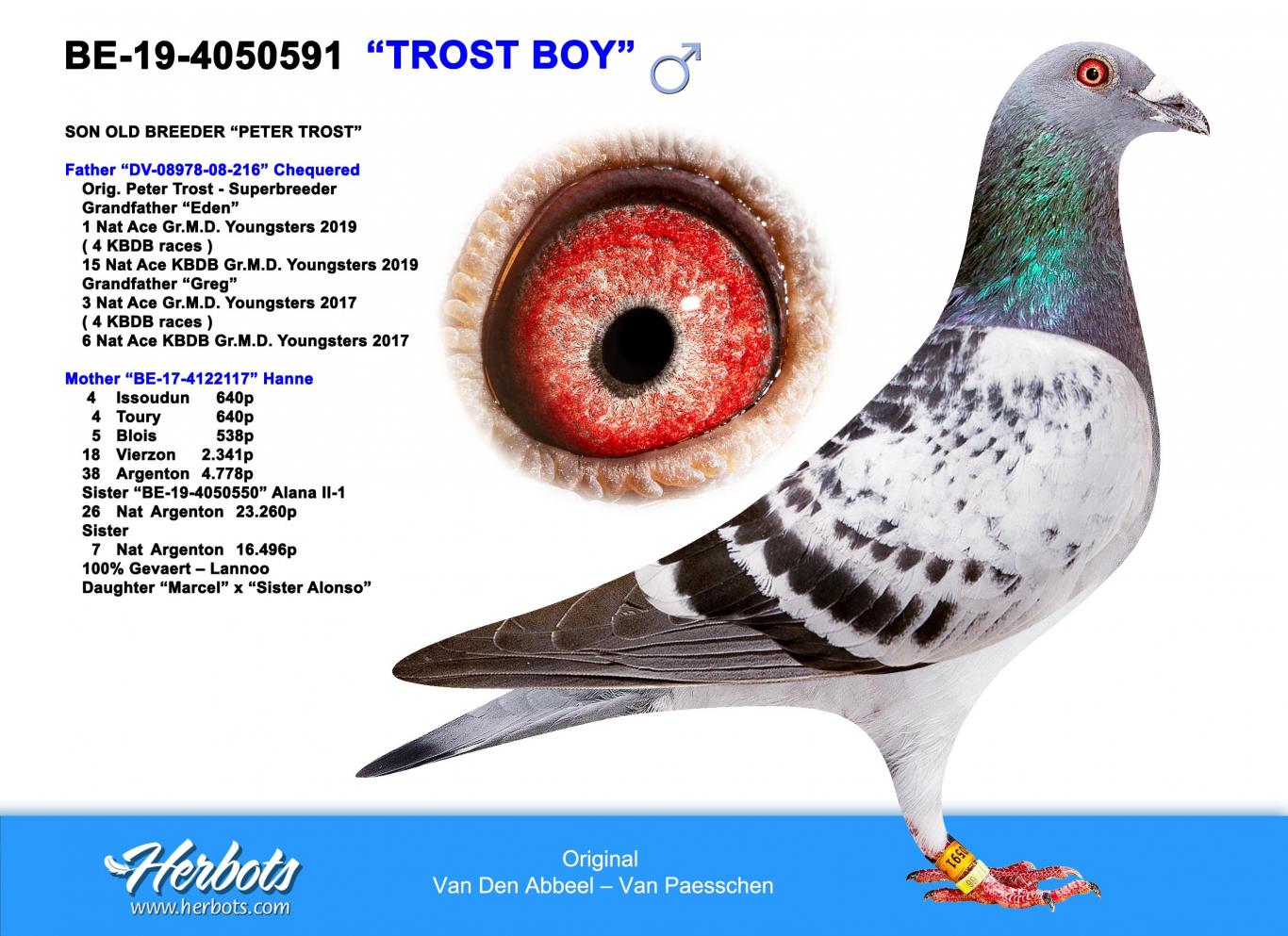