HOW IT ALL STARTED
Koen used to be an keen cyclist. He passed through all the youth categories, but when Koen started working at the national railways he could no longer find the time to train. The search for a new hobby started and through his father-in-law, Freddy Depuydt, he came into contact with the pigeon sport. They hit it off right away and as is fitting for a real pigeon fancier, a pigeon loft quickly arose behind the newly purchased home. Koen "I can still remember. On a Friday evening we signed the deed for the purchase of the house and on Saturday we were already building the loft. From a fancier who had quit the pigeon sport, I got the pigeon loft free of charge and with the help of my skillful father-in-law, the loft was perfectly placed. Not much remained of the original shape of the loft I got. We cladded the entire loft with plastic boarding and installed a brand new roof. It should not surprise you that my first pigeons were delivered by my father-in-law. One Sunday, for instance, he allowed me to basket one of his better breeding couples. Well ... with the hen of this couple I succeeded wonderfully well. I also got the last eggs from the parents of the hen in question and hit bull's eye again. Do not ask me what strain they are from ... my father-in-law is anything but a "pedigree man".

The first year was a direct hit, Koen became 1st provincial champion in the beginners category. In the beginning, he focused on the speed game and mainly played for the Youth Championships. Later, he switched to the middle distance and the heavy middle distance. Koen’s developed into one of the strongest colonies in the Flemish Ardennes in no time!
One of the first highlights was the 2010 season in which Koen became "General provincial champion" of East Flanders. A title that is restricted to the "big ones" in East-Flanders. East Flanders was and still is the largest Belgian pigeon province. If you can call yourself the of best of 7000 pigeon fanciers at that time, you did not do so bad ... Koen owed this title in large part to his "Nathalie" as this hen was also crowned 1st provincial ACE pigeon middle distance 2010 as well as 6th national ACE pigeon heavy middle distance K.B.D.B.
In spite of several offers, Nathalie was not sold. Fortunately for Koen, because she can be considered on of the most important breeding hens of the Crucke colony. The last 3 years several Bert Vanden Berghe pigeons have come to Geraardsbergen. These all moved directly to the breeding loft and the first breeding results are very promising. The most recent investments were made at Maes Anthony (Waregem) and Luc Deprez (Ingelmunster).

HEN SYSTEM
Koen has a 38-strong hens team. These 38 hens are mated with 17 cocks, to play the 'jealousy card'. Late November, the first group of 17 hens was mated with the cocks and their chicks were weaned, a second group was introduced in the loft. They were only allowed to incubate for 4 days. For your information ... the national winner and provincial ACE pigeon KBDB 'Xiana' was in the group of hens that had only incubated.
Koen tells us about his hens system: 'Let me start with the construction of the living boxes. The hens' living boxes have normal dimensions, but there is a slidable partition deviding the box in two equal parts. I always keep 1 part for 1 hen, in concrete terms, this means that if one of the two hens can start a nest with the common male, she always lives on the same side of the box. Look, currently, one in two hens is in winter breeding. Well, those hens are all breeding on the left. The right part of the living box remains closed and is reserved for hen no 2. Hen no. 2 arrives in the loft just before the start of the season and is allowed to incubate very briefly (one day). Thus, both hens are very attached to their box.
At the beginning of the season, upon basketing, both hens are left with the cock individually. Not for long ... a few minutes are more than enough. Only in the second half of the season, both hens are allowed with their cock simultaneously. When this happens, it is the fancier's job to control the jealousy system. The fancier has to make sure always to take two super motivated pigeons to the basketing table and not 1 motivated and 1 demotivated hen.
Upon returning home, the hen that is first to arrive, is allowed to join the cock and they are locked up. The hen that arrives 2nd, can only watch the others' love game. After approximately one hour, the first hen is removed from the loft and 2nd hen is given the opportunity to hug her cock for an hour.

During the week, the hens stay in their 'resting loft' the whole time. This 'resting loft' only has 'shelves' to sit on and between them a board is mounted in order for the hens not being able to see each other. On the floor of the resting loft, twisting bars have been installed so there is no possibility for them to shack up together. The drinking pot is placed on an elevation and two small boards are provided that allow the hens to drink.
The hens are released from the 'resting loft', make their daily tours around the loft, come back in through the aviary and walk on to the central loft. In the central loft can they eat and drink. Once the table is cleared, they are driven into the resting loft. When the hens are in the central loft, the living boxes are hidden with a dark cloth, so they cannot fly into their boxes.
In terms of food, the 'Galaxy Light' mix of Beyers is on the menu as basic mixture and is fed with 'Brilliant' (Beyers), 'Galaxy Energy' (Beyers) and flight mixture with black corn (Versele-Laga). The last days they are also fed peanuts and Optimix (Herbots) + Energol (De Reiger) and Boost-X5 (Oropharma) over the feed. After the flight, Reha Vita Elixir (Schroeder) is given and Probac (Brockamp) goes over the feed.
For medical issues, veterinarian Wim Bailey is consulted. Before the season the pigeons are only treated against ornithosis. Trichomoniasis is combatted with the yellow drops that have become well-known by now, which are provided through the drinking water after returning home. A dash of Belgasol is also added to the drinking pot. At the same time, the partners of the racing pigeons are also treated.
The racing hens have seen a release point weekly from early April. They only stayed home the weekend before Argenton, when Koen releases them at 30 km one by one.

WIDOWERS AND YOUNGSTERS
Besides my hens team I also have 29 widowers. I follow the traditional widower system and in terms of care there are many similarities with my hens system. Only, the widowers on the middle distance are played every fortnight and I give those guys a little more food and make them slightly heavier.

Each year, I breed some 100 youngsters for my own use. I breed them all in 1 round. Breeding all my youngsters in 1 round has some advantages. One round means one release, one training period. In other words, a lot of time saved.
In the youngsters, health issues call for a swift reaction. Being vigilant that nothing goes wrong from the first days the chicks are weaned. An infection with an illness happens quickly and that is why I am always alert. Keeping youngsters healthy is an art and in my humble opinion, the administration of numerous natural products is an asset to keep the entire loft healthy.
The youngsters are played according to the sliding door system. From early June up to an including Gueret this system is followed. If the weather permits, the youngsters are released at 40 km twice a week. Suppose I have to basket on Thursday night. Well ... on Wednesday, the cocks and the hens are released separately. When they return home, they stay together. Thursday morning they go into the basket again to be released at 40 km. Now, they are released collectively. When they return home, they are allowed to stay together for a while and then they are separated. In the afternoon, all the pigeons are fed and without coming together they are quietly basketed with a head full of feed.

“Xiana” 4163909/17
National winner "Xiana" is pure class! This unique hen was also ranked as 1st provincial ACE pigeon KBDB East Flanders middle distance. Was "Xiana" specially motivated for her national victory? Koen: "Perhaps ... as already reported, they are never allowed with their cock the day of basketing, but now I had allowed her to stay with her cock for two hours. Most likely that will have given her super motivation".

In Koen, we found an ideal conversation partner. He calls a spade a spade and after our conversation I could feel free to conclude that he is not the kind of fancier that takes unnecessary risks. No ... he has his strategy worked out to the smallest detail so we can safely say that his impressive results are only the result of very hard work.

Who knows what the future will bring ... we wish him all the best. 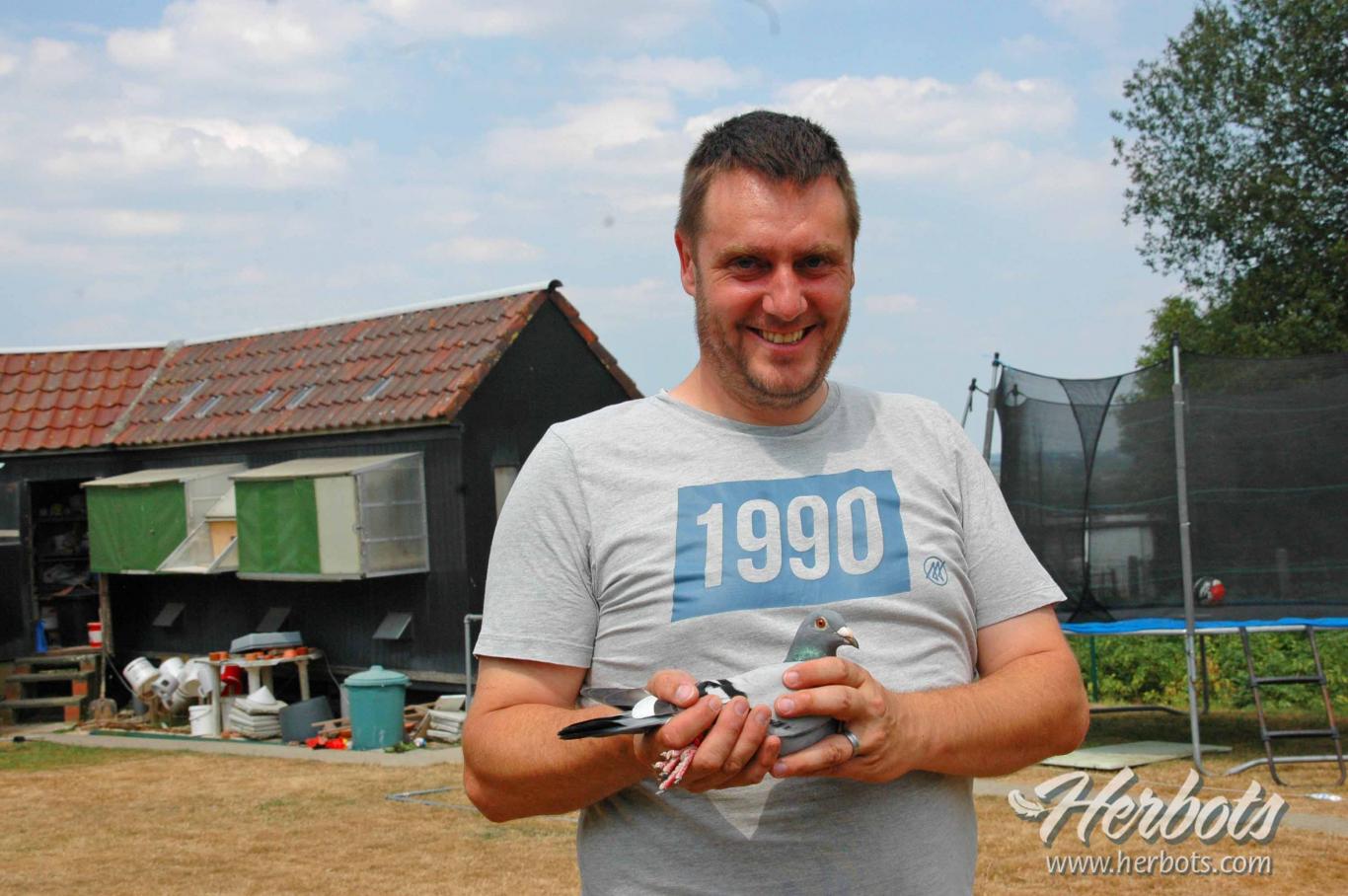