Zulte, where the extreme long distance works out well ! A few weeks ago we went to visit Johan De Meulemeester who crowned himself Champion Extreme Long Distance KBDB 2020 and a few miles further you have the house from Marc Verschelde. Both basket their pigeons in club De Werkman in Waregem ….so when we are all being vaccinated against the Covid19 virus more than one treat is on the schedule in that club.

Not that evident to explain, but the loft of Marc Verschelde is a bit like the holy trinity, but then combined in 2 very motivated and passionate people. Marc is with his 81 years still very young in hart and mind, he can still talk about everything and like to add a sauce of humour over it. His companion and carer since 20 years is Patrice Desal out of the neighbourhood village Machelen. But Patrice isn’t know by this name by many, but when we speak about Fonske than everybody knows we’re talking about the top care taker from the Verschelde loft

Marc and Fonske have over more than 20 years a good marriage, in pigeons sport well heard. Marc has space and lofts enough were they both can practice their pigeon hobby. A lot of loft and very few pigeons…you will read this later on.

They take care together of the pigeons, plan together, consult each other a lot and tease each other to get the best out of their hobby, but especially to have a good time together. They are both fine fanciers, Marc was the care taker at Emiel Denijs for years (when he still raced out of Zulte) and learned the difference between good and bad pigeons really well over there. Also Fonske had quiet some experience from when he was little when he joined the tandem with Marc.

None of them are adventurers on pigeon manner, they don’t look too much in phantasy or unknown turns, but especially in decent pigeons. Long and extreme long distance is especially a matter of quality, patience and knowledge. The old base of this colony are the pigeons from Emiel Denijs accomplished with the strain of the late Roger Florizoone (Marc got these pigeons via the former mayor and pigeon icon Georges Peirs from Machelen). From Georges a real top breeder from the Floorizone-pigeons came onto the breeding loft that now runs as a red wire through the colony.

These pigeons were accomplished with a few successful purchase from one of the biggest long distance icons from Belgium namely Yvon Deneufbourg from Estinnes-au-Val. What the pigeons from Yvon in the nineties and in the beginning of this century achieved at Yvon and with others is really impressive. These pigeons are like peanut butter on a sandwich. The last investments for the heavy work come from neighbour and Belgian champion Johan De Meulemeester. How much they like to race the greater middle distance and long distance, their colony is set for the extreme long distance. A few years ago they already could take home the national palm out of Jarnac…a proof that we’re not dealing with rookies !

A lot of loft and relatively few pigeons. The occupations is as follows: 34 couples breeders, 60 old and yearling pigeons, 100 youngsters. A few are being tested since the past season; a few hens (12) on nest position.

To describe the chapter of the youngsters shortly. Hundred youngsters from the 1st and 2nd round aren’t being darkened, nor enlightened and trained well until 400km (Blois, Tours) and that’s it. National races don’t need to be done. The coupling of the breeding pigeons is at Christmas and then there is time enough to get a team of pigeons ready as yearling, but it are especially the old ones that need to be able to do the extreme long distance work.

Ventilation inside and outside the lofts

The care that lead to champions

After this period all the racing pigeons go into spacious aviaries from mid-October until the 15th of February. It is an aviary where they can stay partly outside but where they can also hide for the wind and rain. Call it an oxygen loft or something like that….for Marc and Fonske it is especially work saving in the quiet Winter period.

Med-February the pigeons will go back onto the loft and are being released carefully a few times. The pigeons are being coupled for a few days at the beginning of the season and being tossed by own means a few times. Afterwards they go onto widowhood and further training is done by the club. The classic widowhood system in its purest form.

The 60 old and yearling pigeons are spread over 10 lofts….a lot of loft, a few pigeons. This has as consequence that the pigeons are relatively quiet on the lofts and don’t have a lot of excitement during the day. Racing and training, eating and sleeping, is holy stuff over here.

On the floor you find wooden rosters. The ground underneath is being cleaned twice a year. The nest boxes are being cleaned during the season on a daily base.

Something Fonske emphasizes is that the pigeons need to adjust and not the other way around. At the beginning of the season the cocks train once a day for about 40 minutes. The firs week a push is being given with the flag but after a few days this isn’t necessary anymore. When the sputnik is being opened after training they all have to be in within the 2 minutes. This is being looked at very strict from the beginning on with no food as punishment…and this works without any problems and is being rewarded with some candy and some peanuts that are being given in the mutual feeding trunk.

The pigeons are being basketed as quiet as possible and get their nest dish for about 5 minutes. No hen is ever showed before basketing. From training on their hen is always present in their nest box at arrival. At the beginning of the season the hens are being taken out from the moment the last pigeon has arrived. Along the season progresses, the time is being prolonged as well.

Also in this Covid19-season no special changes were being made. The pigeons weren’t darkened neither enlightened. They feared to change a proven schedule…and this with result. The consequence was that on the last race out of Tulle no cocks were available anymore with a decent number of pins to be able to race. On this race a few hens on nest position were basketed.

The food exist out of the Versele-Laga mixtures and mixtures from food farmer Bernard Lefevre from Zulte. At the beginning of the season the pigeons get light food and at arrival diet. Along the distance gets longer the last feeding times are being increased energy rich. Fonske watches really closely on the fact that they keep on eating until basketing and thanks to a bit of variation and an occasional candy this works out. After the last meals they always get red corn as they state that this is also the food they get in the basket and that they need to be trusted with this.

Pascal Lanneau is their medical advisor but from a pro-active way and not a reactive attitude. The pigeons are being vaccinated against paramyxo and paratyphoid. Before the season they get a dose Flagyl and from then on they get every fortnight at arrival with the know yellow drops in each nostril. At arrival glucose in the drinking pot and on Sundays and Mondays Probac 1000 from Brockamp. Many other things aren’t given as they doubt for the necessity and the experience that the proven system works well. Yearly many tows of garlic are being cut and placed in the drinking pots.

We keep on repeating it when we state that racing top on the extreme long distance is mainly a matter of top quality on pigeons. Pigeons that are able to keep themselves by nature easily healthy, need very few extra’s to have a solid base health. To prepare these pigeons in a goal-oriented way on the races with the necessary support (but not more) results in success. The basket and the kilometres will do the selection work.

The ‘Supercrack’ is the best from Belgium

This 5-year old beautiful cock, soft by hand, very thick feathers and a spacious wing, was in super form this year. He had proven the years before that he could race really well, but in 2020 he was as sharp as a knife.

Marc and Fonske can’t point out what the base of his motivation could be, but he did give them the signal that he was ready. His behaviour showed that the top form was present.

Dixit Fonske “the Supercrack is a strange one”…..he is a summer youngster that flew in his birth year only Pontoise. Had a low profile as yearling but never far too late. To develop this more at a later age.

The days before basketing and at top form he is always the last one to get in after training. He runs over the shelf of the sputnik and does one more turn and then gets in at ease…a short walk on the shelf and another turn and again on the shelf…one more turn and then coming down and going in as a rocket…This simple is the direction of use of this Supercrack!  This shows again that the observation of the fancier is of big importance to read a pigeon. 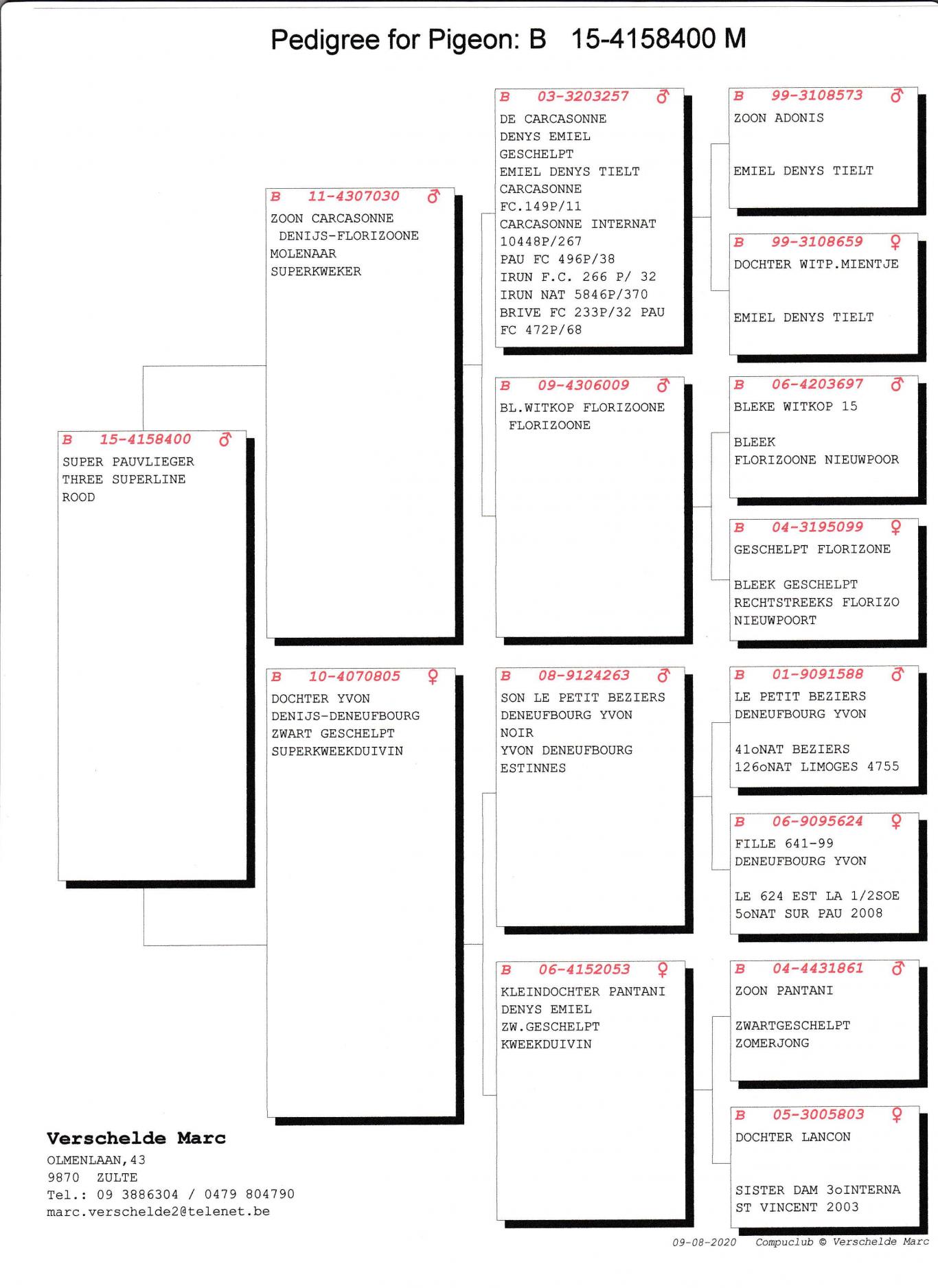 His origin is one with 5 stars. His father is a son of the Carcasonne from Emiel Denijs coupled to the ‘Blauwe Witkop’ Roger Florizoone.

His mother is a daughter out of the ‘Yvon’ (son to the ‘Le Petit Beziers’ from Yvon Deneufbourg) coupled to a granddaughter ‘Pantani’ from Emiel Denijs. The extreme long distance blood from reputable lofts all together in a national ace bird.

He won this prestigious Extreme Long Distance Ace Bird title by winning underneath::

Hurray, three times hurray for a nice coronation and the efforts delivered by Marc and Fonske.

…..and as last question before we left the building “what is a good long distance pigeon for you and how do you select” ?

With this truth as a cow it has been confirmed once again that winning an ace bird on the extreme long distance isn’t that hard….when it’s on your loft !

Congratulations with this beautiful trophy from the entire Herbotsteam !