Fernand Malfait from Zerkegem (Jabbeke) or in other words Hok Malfait (Fernand and son Serge), win the past weekend 1st National Agen against 3,938b…in the meantime the count of national victories is at 4…this after winning twice Dax, once Jarnac and now Agen.

On Friday Agen was being postponed due to the presence of fog…on Saturday they were being released at 6h45. It promised to be a very hard race with temperatures that rose above 30°C from early in the morning, and the entire flight line could count on extreme high temperatures in combination with an ESE-wind…the prognoses of the earliest pigeons was set at the coast. On Saturday evening there were only about 6 pigeons in France that reached their loft, this just before the Belgian border. When the pigeon from Fernand got home is something nobody knows, he was clocked in the dark at 04h24m07s.

*Agen 2019:
As mentionned above, the winner was clocked at 04u27m07s. The night before at around 11 o’clock they looked outside once more as Montélimar was still coming home…so the electrical system stayed on the entire night, the pigeons could only get into the sputnik. A bit after 5 o’clock Serge got at the lofts at Fernands’ place and saw there was a pigeon clocked out of Agen…after he looked were the pigeon was, Serge had to wake up his father in order not to set of the alarm…When Fernand woke up they quickly did everything they had to do to confirm the clocking and to register the pigeon. It was clear right away that there wasn’t going to be a belgian pigeon that could beat this, and after an amount of time it was clear that victory number 4 was in, with this time a national victory out of Agen!

The national winner was a late bred from 2017, trained well as a year bird and only raced a few heavy middle distance races until Chateauroux. This yeare he raced beginning of April Arras followed by Clermont, Fontenay, and then Vierzon and Tours...to shine on Agen.
In a matter of heritage we can state that he comes from real heavy long distance pigeons, both father as mother come out of the ‘Monseré’ 3rd National Ace bird KBDB Greater Long Distance 2015.

*System:
They race the classic widowhood. Sometimes they start of with old or yearling hens…but this doesn’t last very long.
Before the season they visited vet Ruben Lanckriet. They cured against trichomoniases and got a cure against head diseases. Before every national race they give a cure against trichomoniases with the known yellow drops (one soupspoon per kg food)..
The widowcocks always get all they can eat and this is a mixture of 4 different kinds of race mixtures. Until half of May the widowcocks train once a day in the afternoon with good weather. As from half of May they also come out in the morning when it’s not too cold…they don’t have a set time to train, in the morning this is usually around 6.30 and in the afternoon it can already be at 16h, but evenso at 17h or 17h30. Normally they can come in after one hour…they always train freely, but when they all sit together for a while they are being chased, but he has to admit that they never trained as good as they train this year, they go up very high, train spread up, take off wel….in a nutshell; all signs of a good shape.

*Strains:
When we have a look at the strains we can start of with a pigeon from ’88, ‘De Olympiade’, a pigeon from loft Jerome D'Herck from Langemark... this one was being coupled against their own ‘Lourdes-strain’ (strain Dordin via Edward Galliaert), and many other hens where they co-bred with. Out of this Olympiad-pigeon they got a strain of good once and they are still to be found in their pigeons at the moment.
Another succesfull crossing was set with pigeons from Ludwig Vandecasteele.
And also pigeons from Ludo De Roeck and Carlo Gyselbrecht came to strenghten the loft. Next to these a lot of different strains are being tested out. 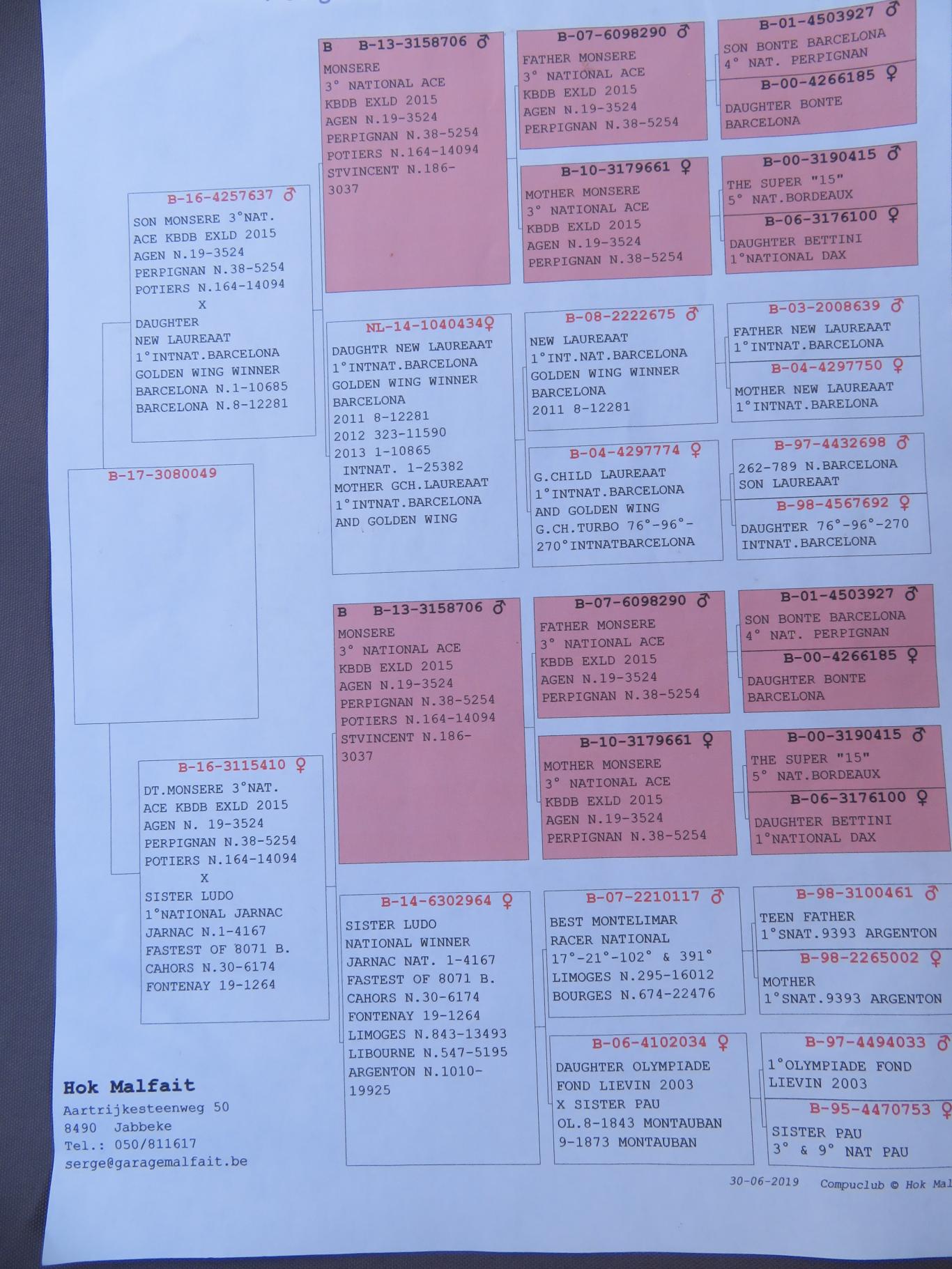 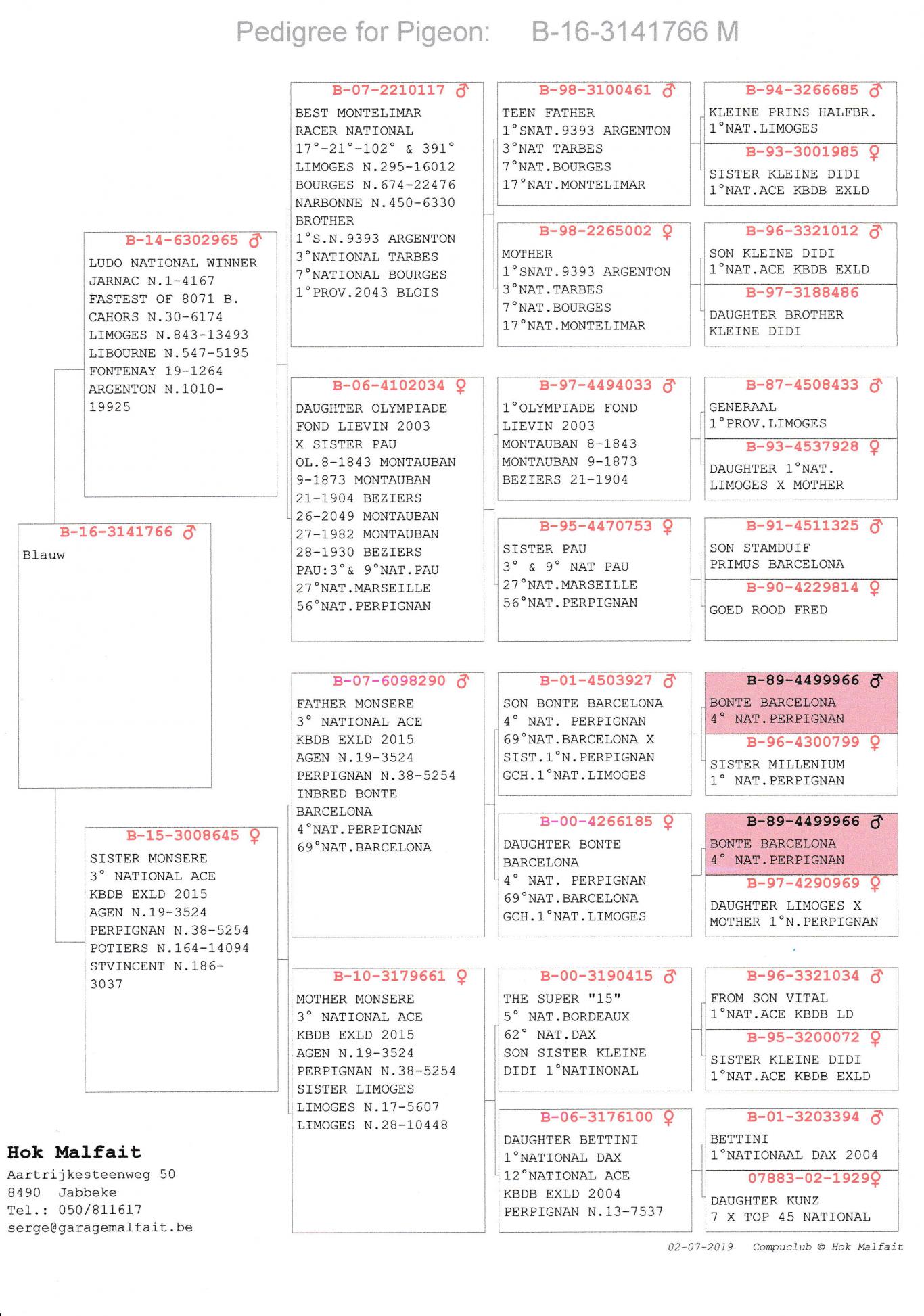 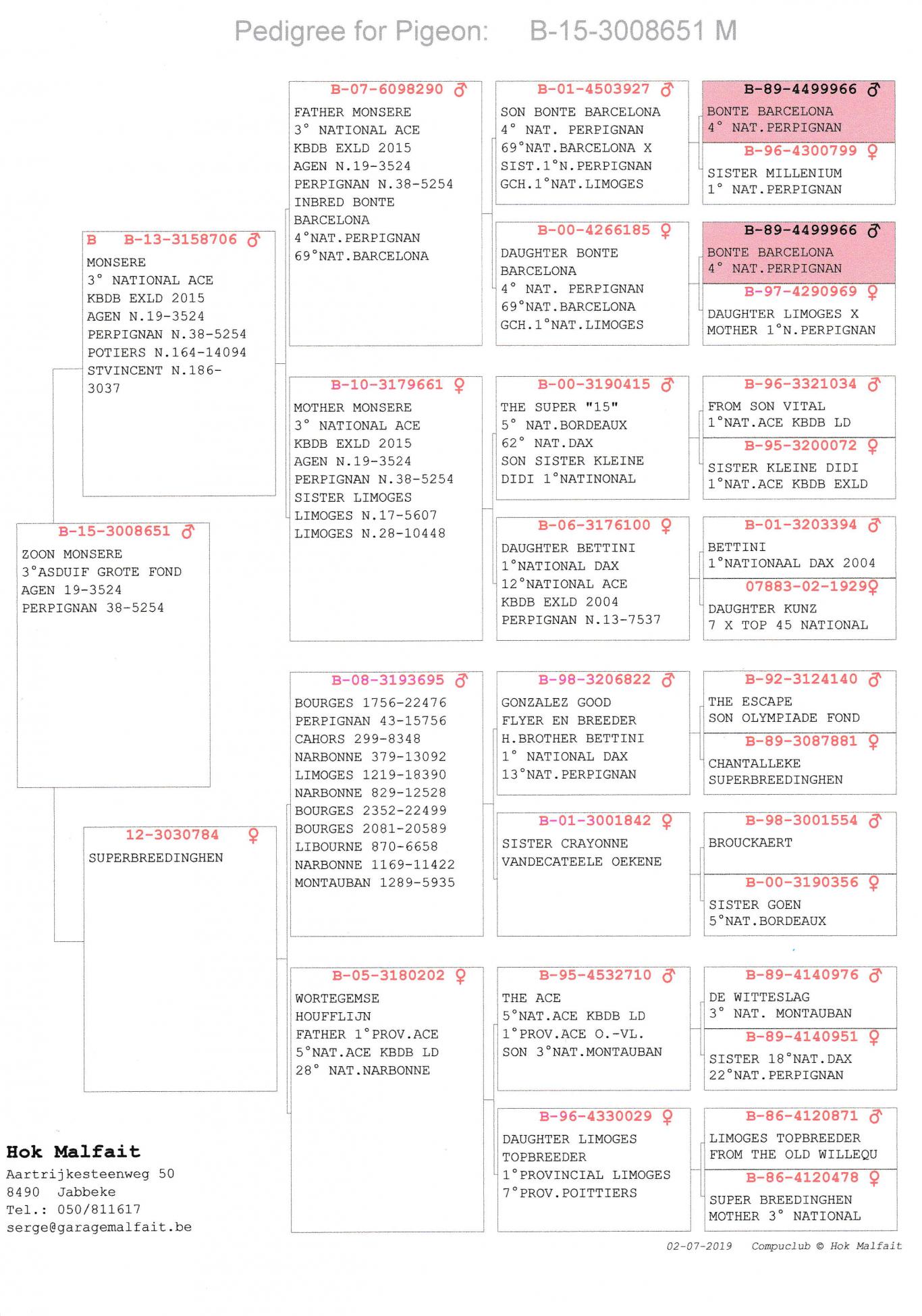