We start off this article by stating a paragraph from a former article anno 2017:  Together with his Kathleen, they became the proud parents of 3 great sons who are all very sportive. Being present and supporting them with their busy sport activities (two of them play football on an Elite level), surround them with the best care in daily live and work both full-time does raise the question ‘when do you have time for the pigeons?’

Only two years later John decides to say goodbye to pigeon sport (temporarily). On Tuesday the 3rd of September, when the word got out that the last national race was going to be held on Friday, was the moment that the straw broke the camel’s back. When you only race every two weeks and you can’t see your pigeons arrive for the third time in one season because basketing or arrival is being replaced, the joy for your hobby is far off. Off course these decisions are made in favour of the birds but not at all for the working pigeon fancier…

Full steam ahead for the season of 2018 was what they thought but it turned out to be differently. Together with neighbour Maurits, John was a victim in the bird flu crisis. His loft fell in between blast radius that was being set by the government. Due to this decision the loft couldn’t race for 7 (!) weeks. From half of June until the end of July the entire racing team (old, year birds and youngsters) had to stay on the loft.

The season of 2019 was started off with a huge handicap (year birds without any experience as a youngster in 2018, old birds without experience as a year bird in 2018, ….) This together with the responsibility at work and the increasing trend of moving basketing date or races made John decide to say goodbye to pigeon sport for a few years and sell all pigeons (minus 2019).

John is concerning pigeon sport one of the relatively young men that has a hereditary taint. In the bar annex butchery from his grandfather in Asper-Gavere there was the pigeon club and both his grandfather and father were though racers on the middle and greater middle distance. John started to race rather quick together with his father Willy, but when he lost to early and very sudden his father it was refocussing for a while.

John had been very busy with the care of the pigeons but the real ‘fancier’ was father Willy. With help of a few good friends he was taught how to feed and so on…and yes, John is a good student. He proved very soon that he was up for it.

You can cook the best with good ingredients.

When the basic ingredients are good and the knowledge is present, then the possibility of a good result is much higher. That is also the vision of John, you have to have good pigeons and then use your energy and input very efficient and effective. The colony is rather small. It couldn’t be any bigger or it wasn’t workable anymore within the time frame that he could spend on the pigeons. Due to the limitation of the amount of pigeons the selection has always been very hard. Pigeons that didn’t feel that well by hand were out, pigeons that had some trouble with their health were out as well…and then there was the selection of the basket.

Where did John get his good pigeons ?

The base of the pale and red pigeons are still these from his grandfather and father ( to trace back to pigeons from the late brothers De Baere from Nokere and Marc Piens from Zingem). These pigeons are the base within his strain (the Bounty-strain) and it are also these that can take on the long distance until the extreme long distance. They were being accomplished and crossed in with the best of Gaby Vandenabeele (Dentergem – son and daughter ‘Mister Magic’, daughter ‘Pablo’), Norbert Ally  (Aarsele, successful co-breeding), Vermeerbergen-Wilms (Mol) and Charles Vanlancker (Heurne). Also with pigeons from Jos & Jan Loobuyck (Aalter) it worked well and from ‘Vaillant’ (direct hen from Loobuyck), the golden couple pigeons ‘Dieumerci’ and ‘Dieudonné’ were being bred. Also with a hen from ‘Keikop’ from Jos & Jan, the breeding turns out to be very good. 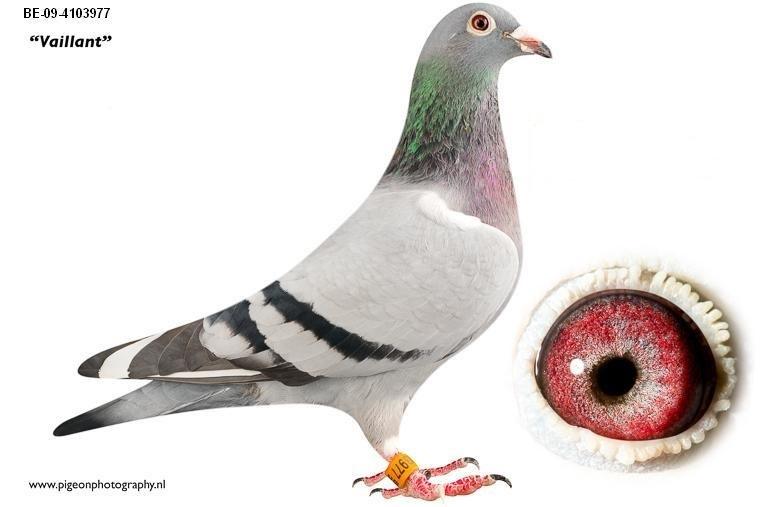 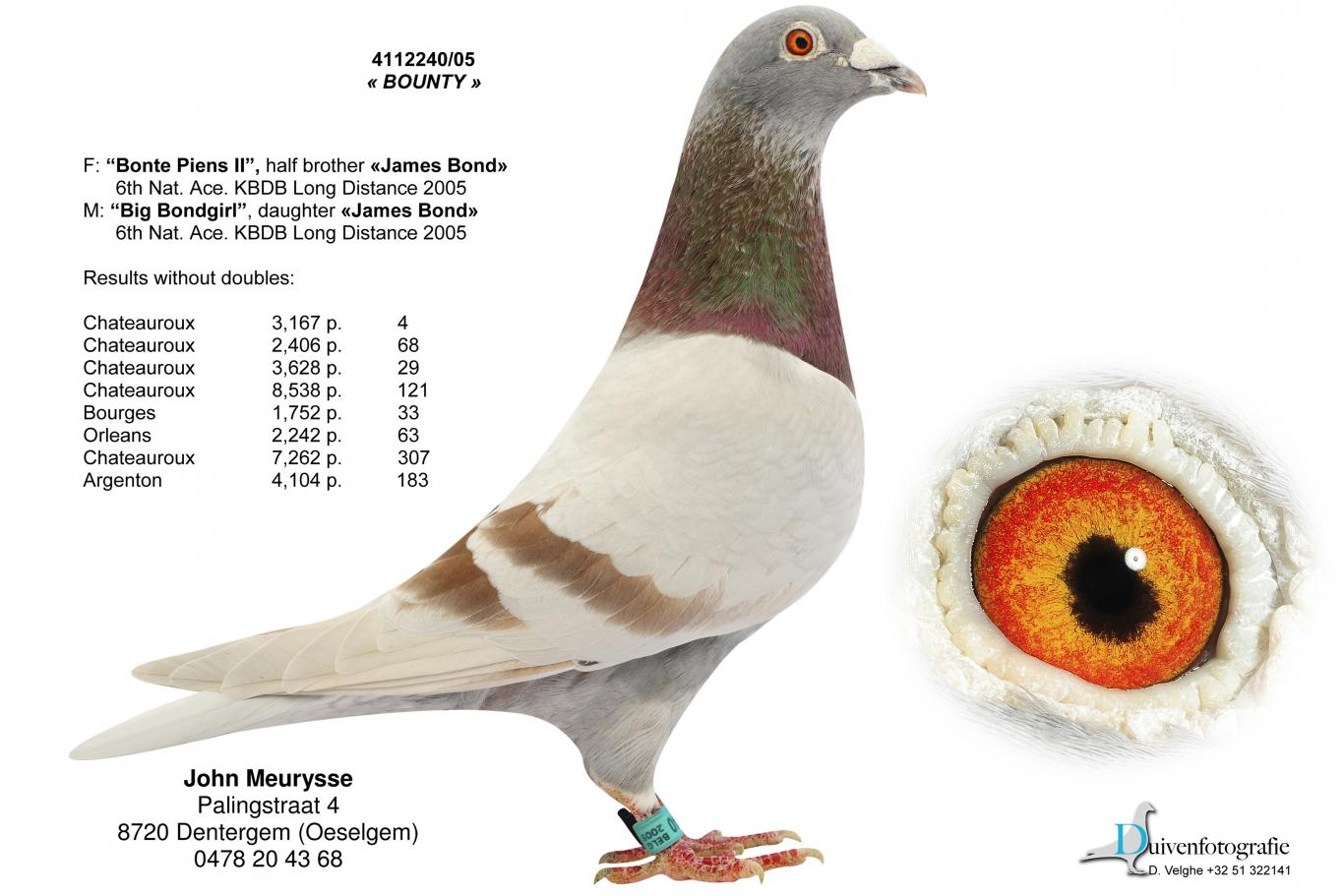 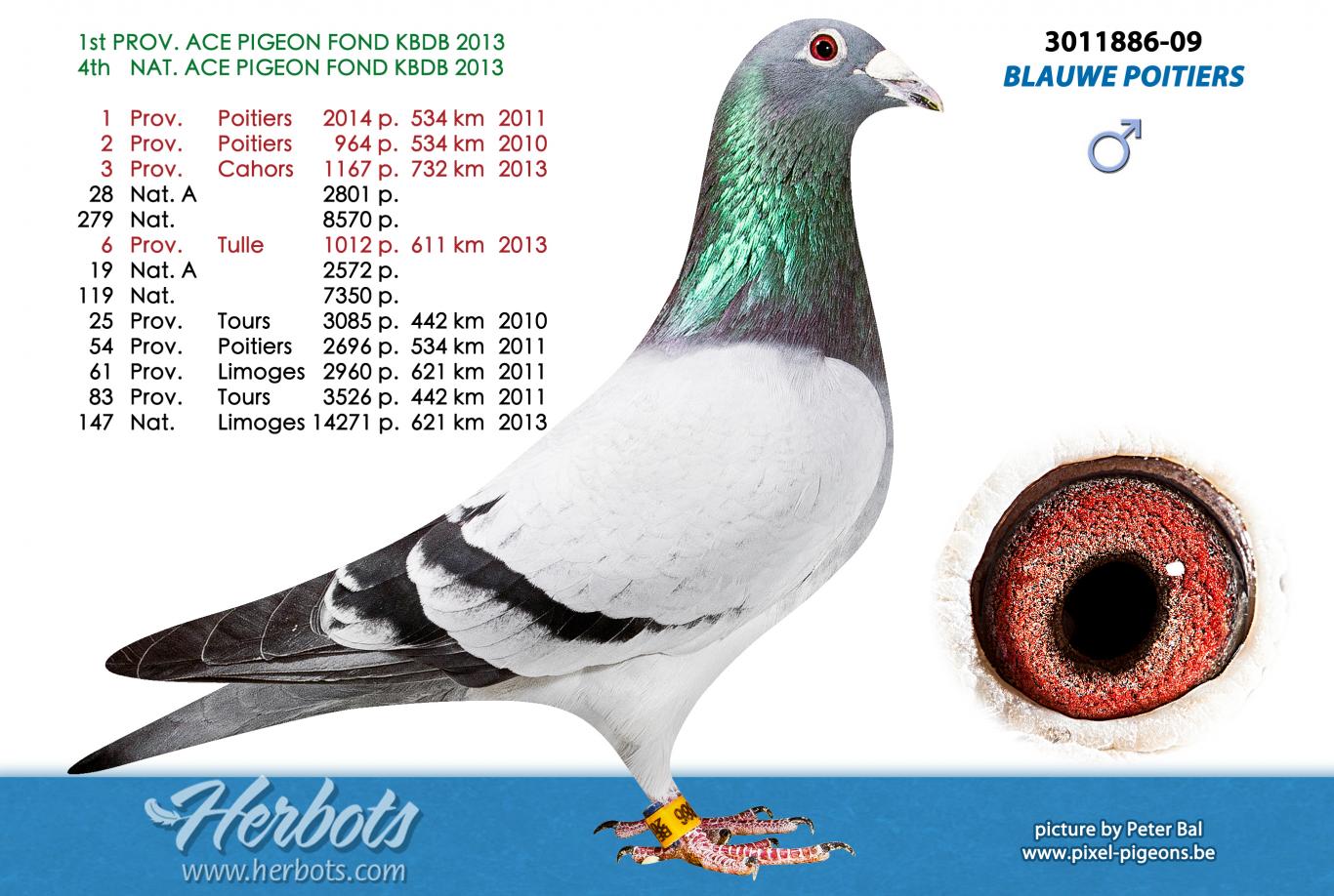 Dieumerci and Dieudonné convinced everybody

It was clear that John wasn’t a one day fly with his pigeons. It was in 2014 that the brother couple ‘Dieumerci’ and ‘Dieudonné’ were competing to each other at the top. The both raced really well on the long distance races. It was finally ‘Dieudonné’ that made it as 1st Provincial Ace bird Long distance and 2nd National Ace bird Long Distance KBDB. Their palmaris is just amazing. 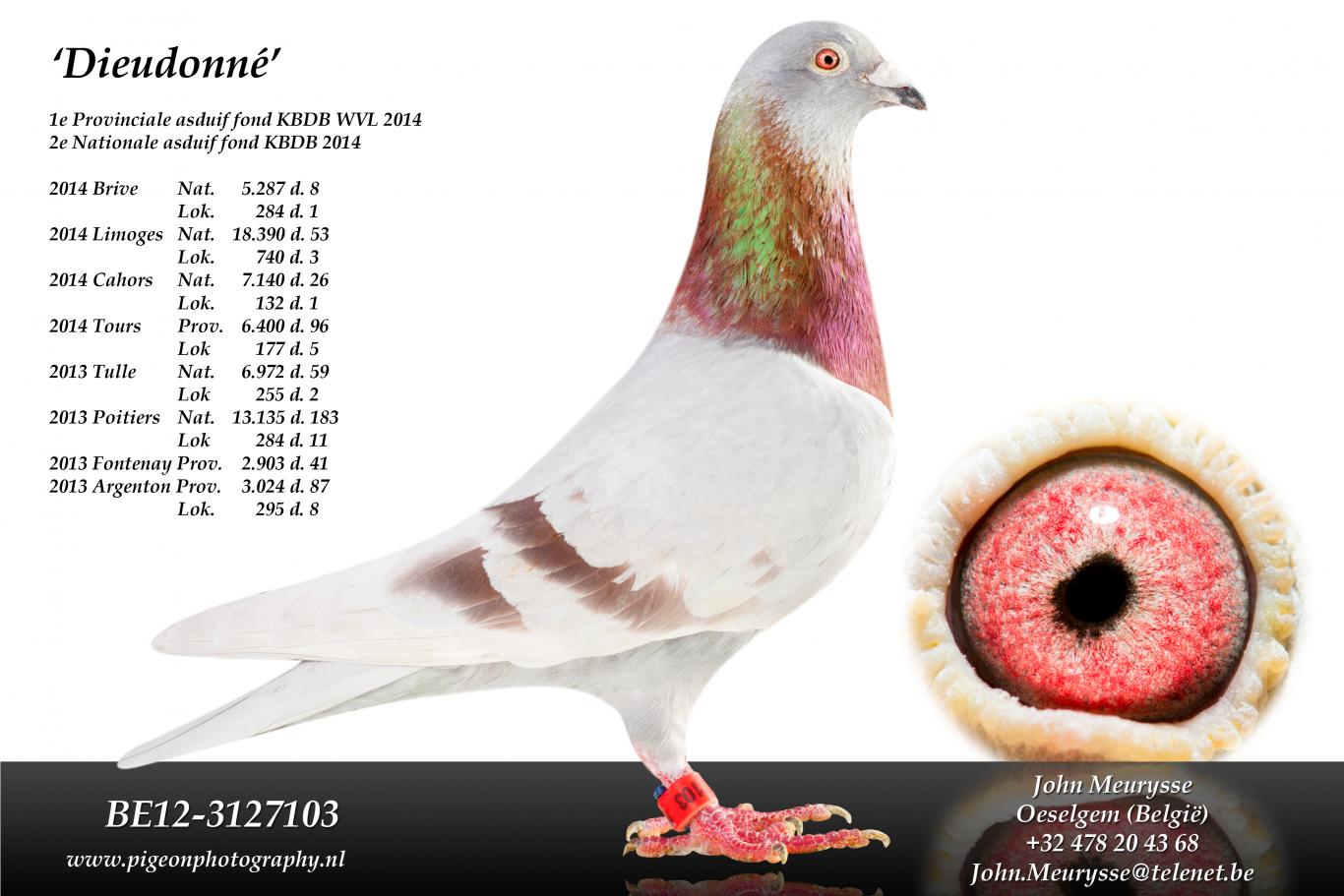 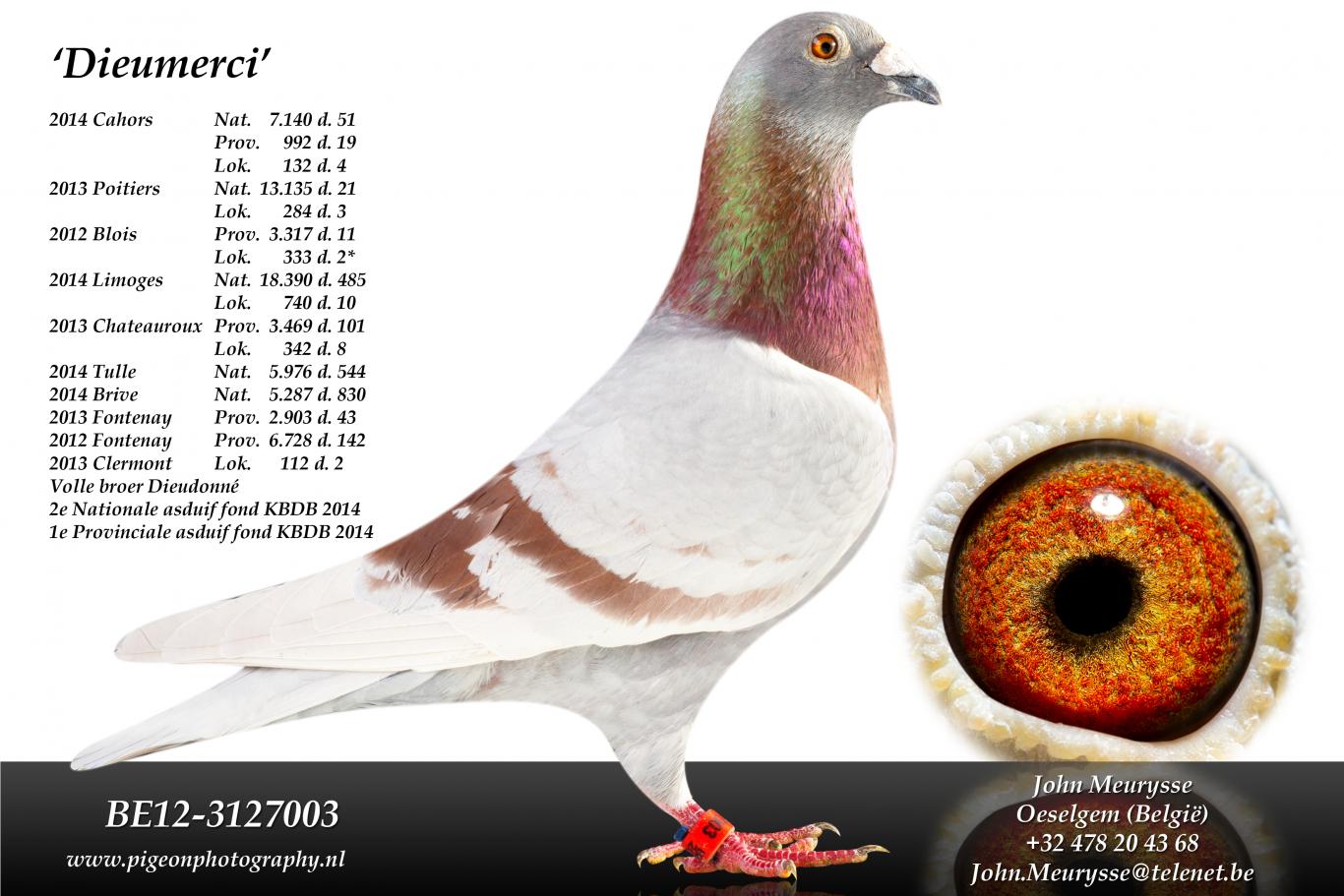 Many references on other lofts, proof of quality.

Not a more beautiful tribute and a not a bigger satisfaction then the results being set by others with your pigeons. Due to the strict selection there is a lot of quality present, no-one who discusses that. The level of selection is being set higher and higher so no wonder that others win big with these pigeons. There are some really nice references to mention and that is something that John also likes to do with big pleasure.

Head from short distance to Narbonne. Few lofts have shown having this kind of polyvalent pigeons. With a rather small colony John has proven this being possible. Throughout the years he tried to keep the strain intact but with the input of the necessary new blood. The past few years this was being realized with pigeons from Gaby Vandenabeele (Dentergem) with as last asset the top breeding hen to be ‘Megaby’ (dixit John the most beautiful and best hen he ever had) and Roger Engelen (Dessel).