Holsbeek: The tandem Jespers-Vanderwegen, and we are talking about Herman Jespers and Johny Vanderwegen, are known for their chain results on a regional, provincial and national level. After winning the 1st National La Souterraine in 2014 against 9,204 yearbirds and in 2015 the 1st National ace KBDB Fond youngsters on their palmares, they won in 2019 the national race from Montluçon. Not only were they primus against 14,104 year old pigeons but their widower "Justin" was with a speed of 1346.19 m/m also the fastest of all 23,963 Montluçon racers.

Let's see how this magnificent colony was built. In 1993 Herman Jespers started at the current address with a legion of foreigners that he had gathered from friends. Later pigeons from Sylvain Vandevelde, Holsbeek and Yschol-Janssen, Houwaart were added.

In the blessed year 2003 they bumped into Dirk Van Dyck, Zandhoven... It clicked right away. Herman and Johny paid Dirk a visit and when they got their hands on that quality they did not hesitate for a second to make the necessary investments. The Van Dyck acquisitions were a bull's-eye as Herman and Johny got no less than their basic breeder "Little Dirk" B03/6086339 who is a grandson of the "Bourges" and who in turn is a brother of the world famous "Kannibaal". "They were pigeons that could fly right away national top results" say Herman and Johnny in choir.

In 2005 they already looked over the border and one day they were on the sidewalk near Ad Schaerlaeckens, Baarle-Nassau. They got there pigeons that mainly brought speed in the trunk. The crossing Van Dyck x Schaerlaeckens took as the best butter on a thick sandwich and a lot of Herman and Johny owe to the tribe pair "Kleine Dirk" (line "De Kannibaal" of Dirk Van Dyck) x "Fleur" (line "Ace Four" of Ad Schaerlaeckens). Children and grandchildren perform really sublime. 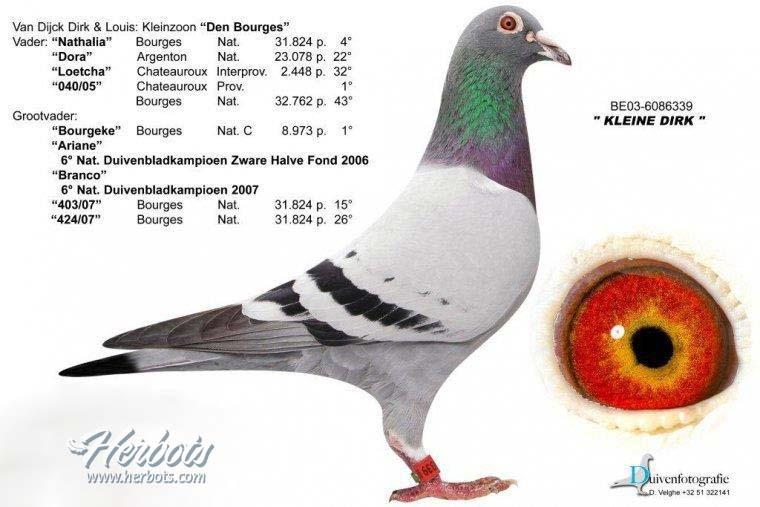 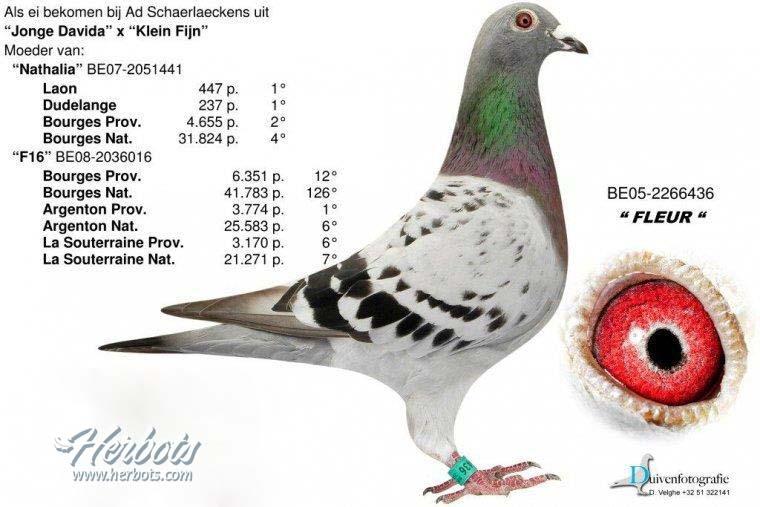 In 2010 pigeons were also collected from Gaby Vandenabeele, Dentergem... and also this input was successful because the 1st national ace KBDB youngsters came from the cross of Vandenabeele x "Daughter Kleine Dirk".

Globally we can say... all combinations succeed as soon as there is a pinch of Dirk Van Dyck !

We also go back to the national flight from La Souterraine. In total there were 16,449 old and yearlings basketed and the Jespers-Vanderwegen pigeons shone to run against the 9,815 yearlings with the 1st and 3rd place. National winner was "Nadette" (B13-2006488)...with her speed of 1190 m/m she was also the fastest of all 16449 La Souterraine racers. Coincidence or not ... "Nadette" is a granddaughter of regular couple "Kleine Dirk" x "Fleur".

The 3rd place national was won by "Ramona" (B13-2006491). "Ramona" is a daughter of "Ronaldo", so half a sister (same father) of 1st National ace KBDB youngsters "Super Ricka" and on the mother's side "Ramona" is a granddaughter of the breeding pair "Kleine Dirk" x "Fleur".

"Super Ricka" was a small fine blue hen. She had an eye shining like a pearl with lots of pigment and charisma. It was a tame pigeon that was well muscled with a very soft plume. It was a very smart pigeon that was also very alert. She had a very small mistake (?)... At the hand inspection she stuck her tail up which is not appreciated by many fanciers.

Chateauroux was her last race and unfortunately she didn't come home. "Super Ricka" had enough races on her record to qualify for the national ace pigeon title but with one more race on the calendar she could in theory be beaten by three pigeons which didn't happen in the end. She was basketed on her last race with the intention to improve her coefficient but she died on the field of honour. 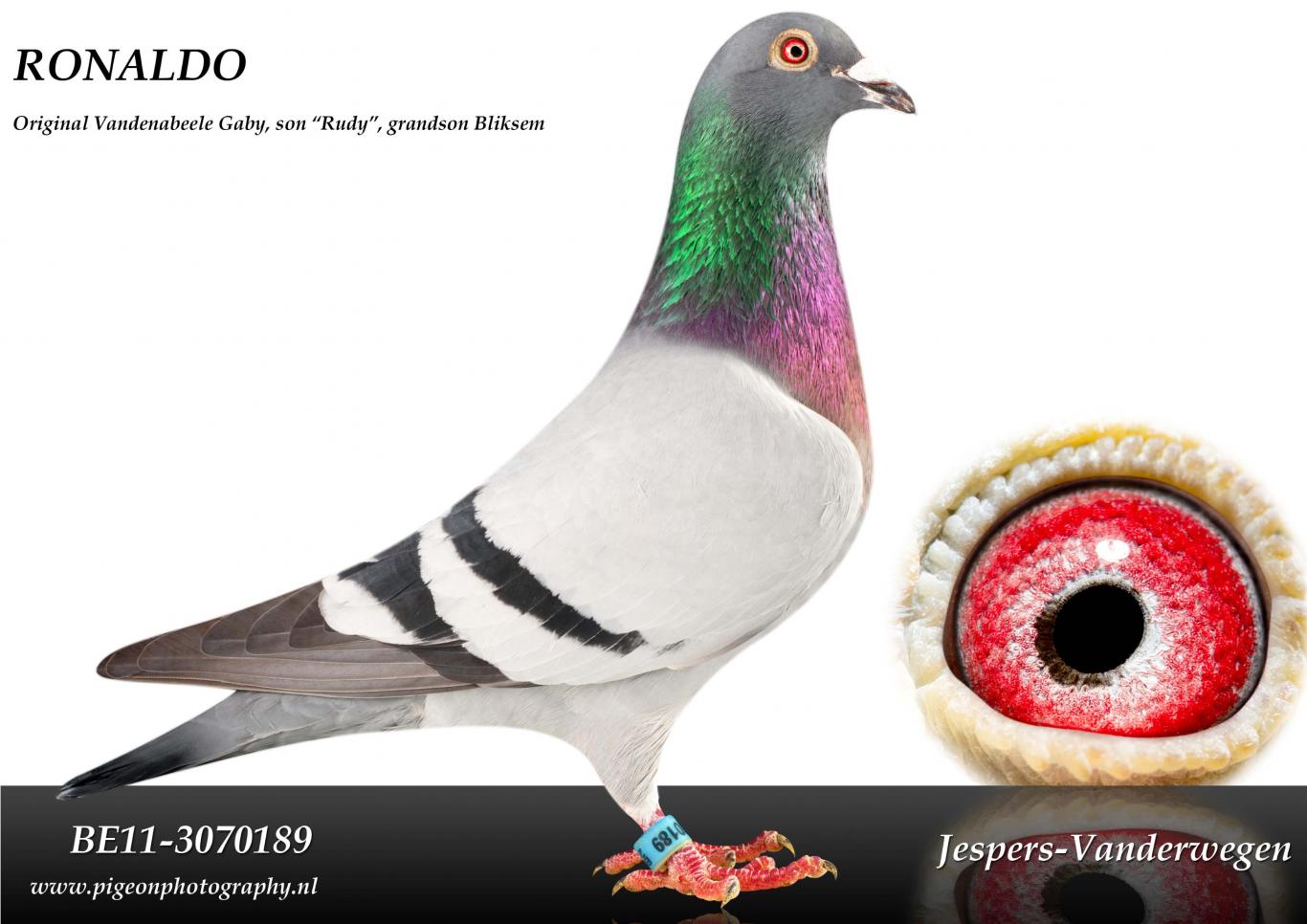 And then the national flight from Montluçon. Montluçon is 533km away from Holsbeek and the team yearlings of Jespers-Vanderwegen more than felt like it. Against 14.104 years old, no less than 5 Jespers-Vandewegen pigeons classed their ring number in the Top-100 national ! They took places 1-7-22-74-93 swiftly for their account. 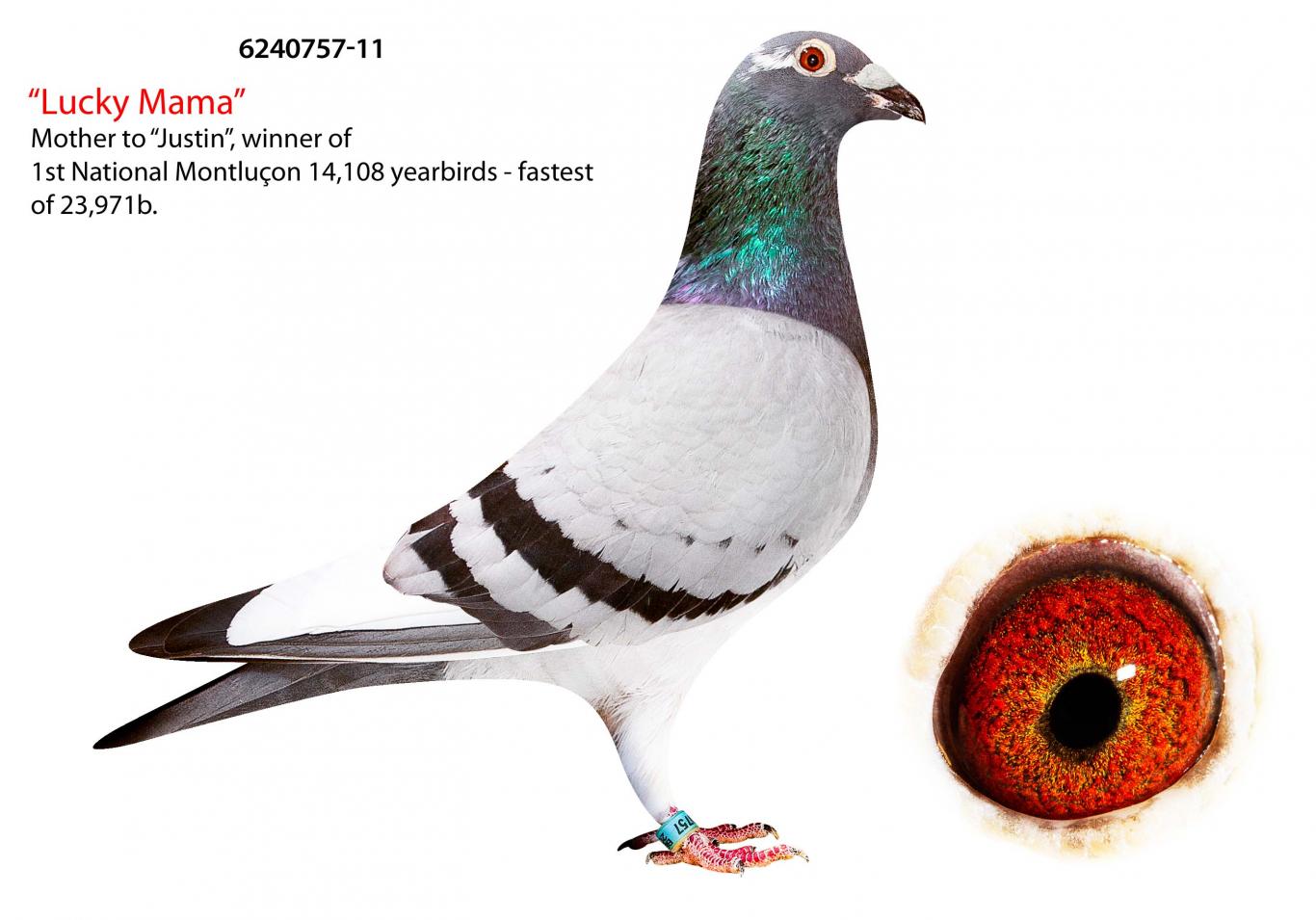 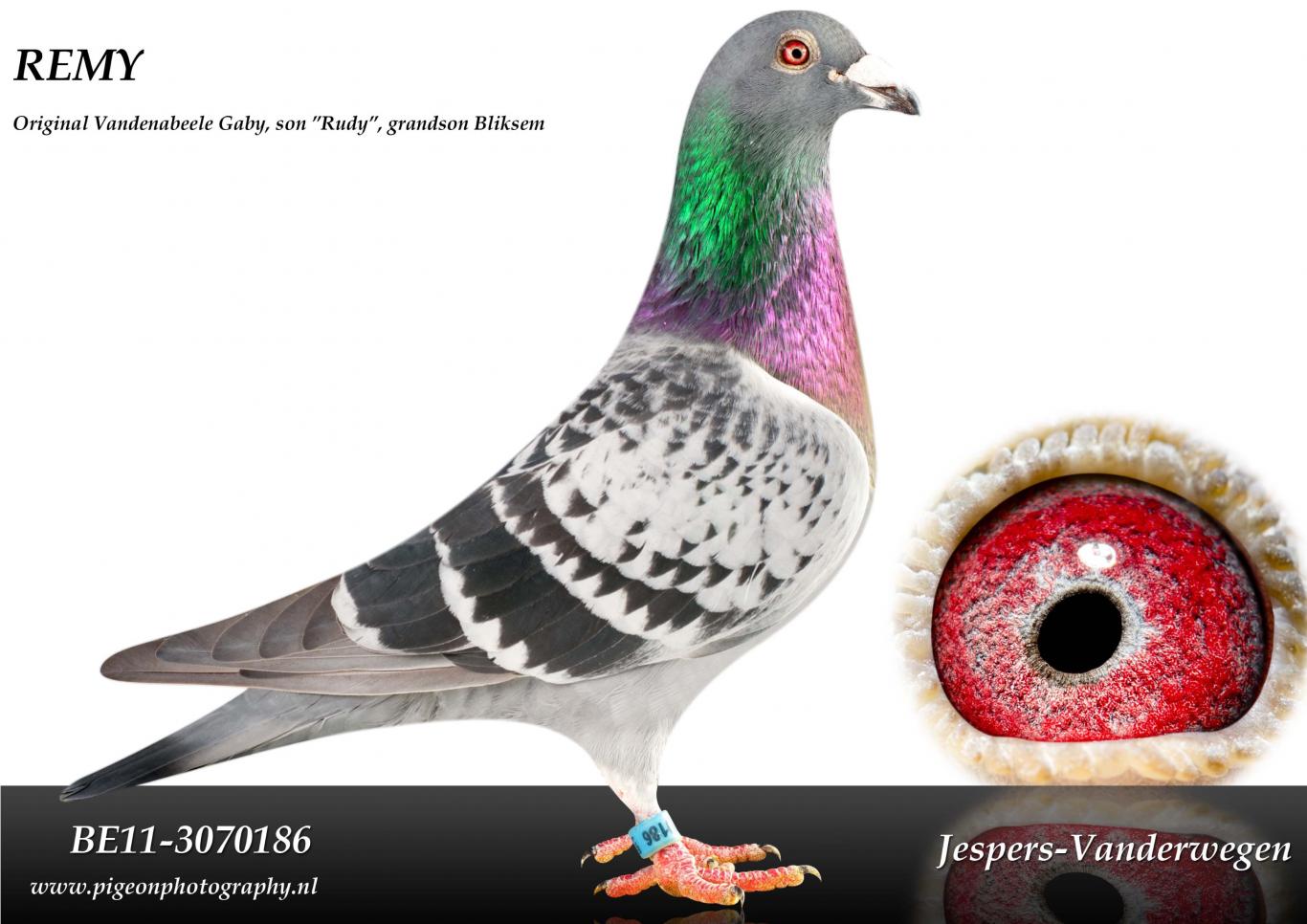 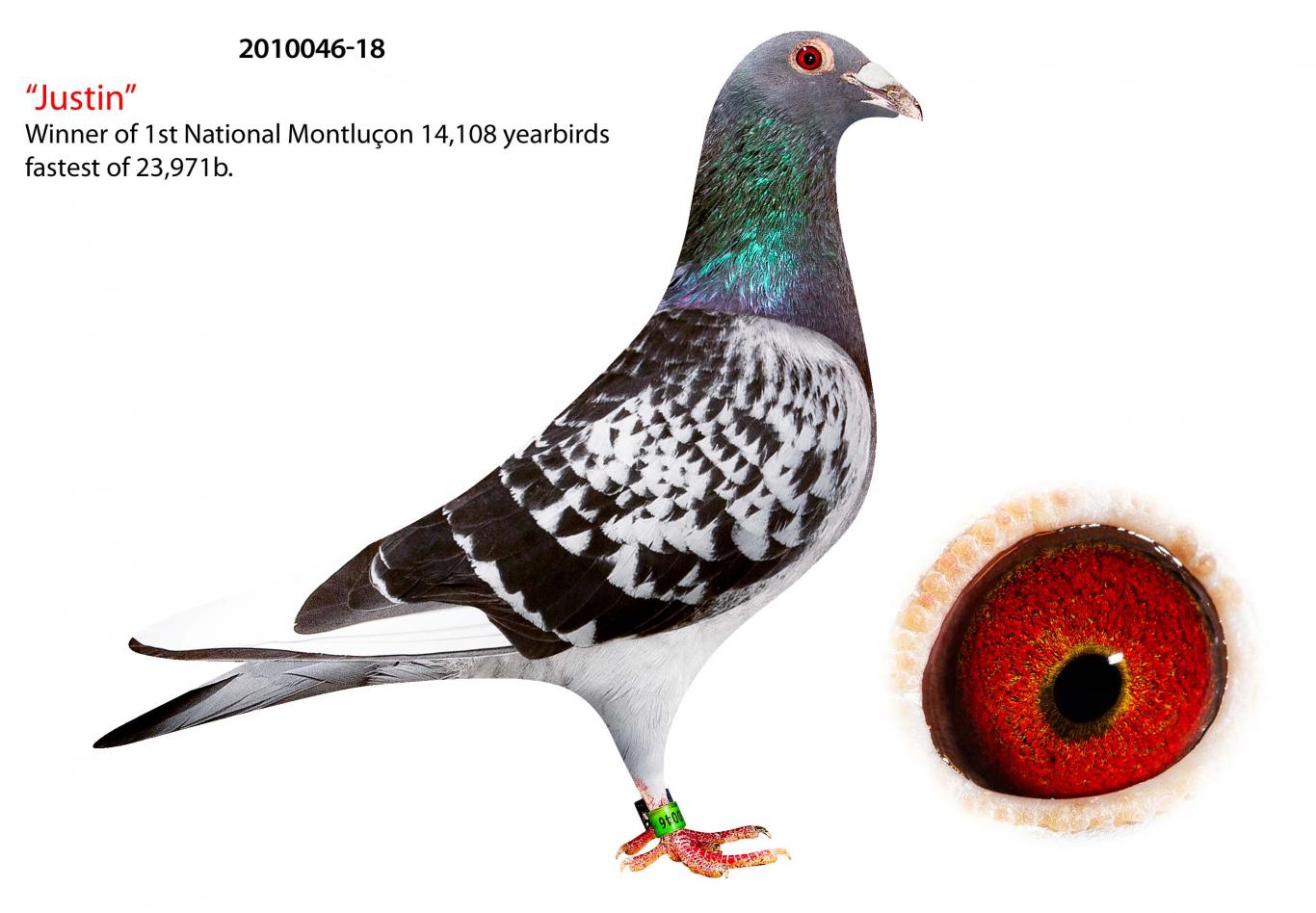 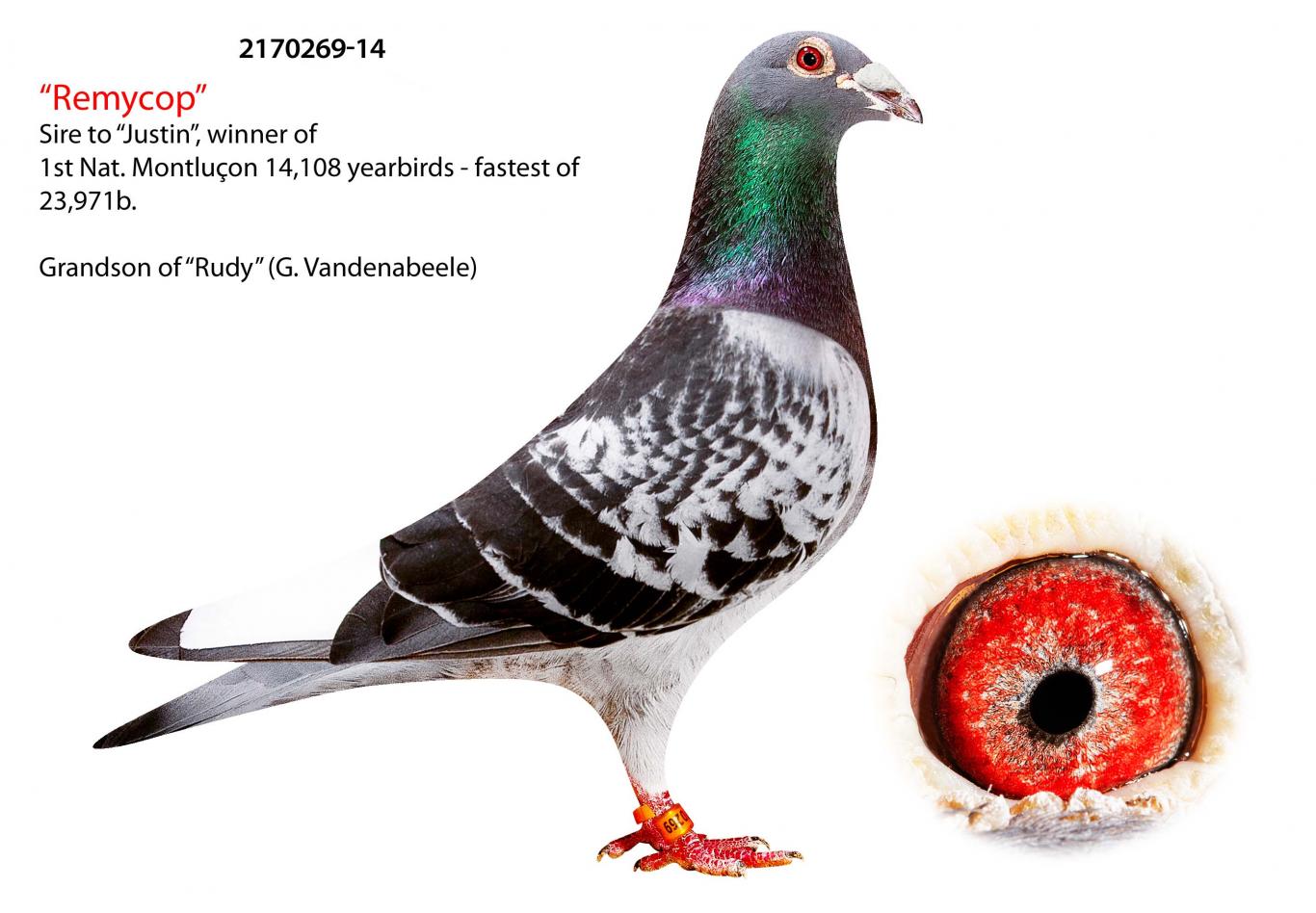 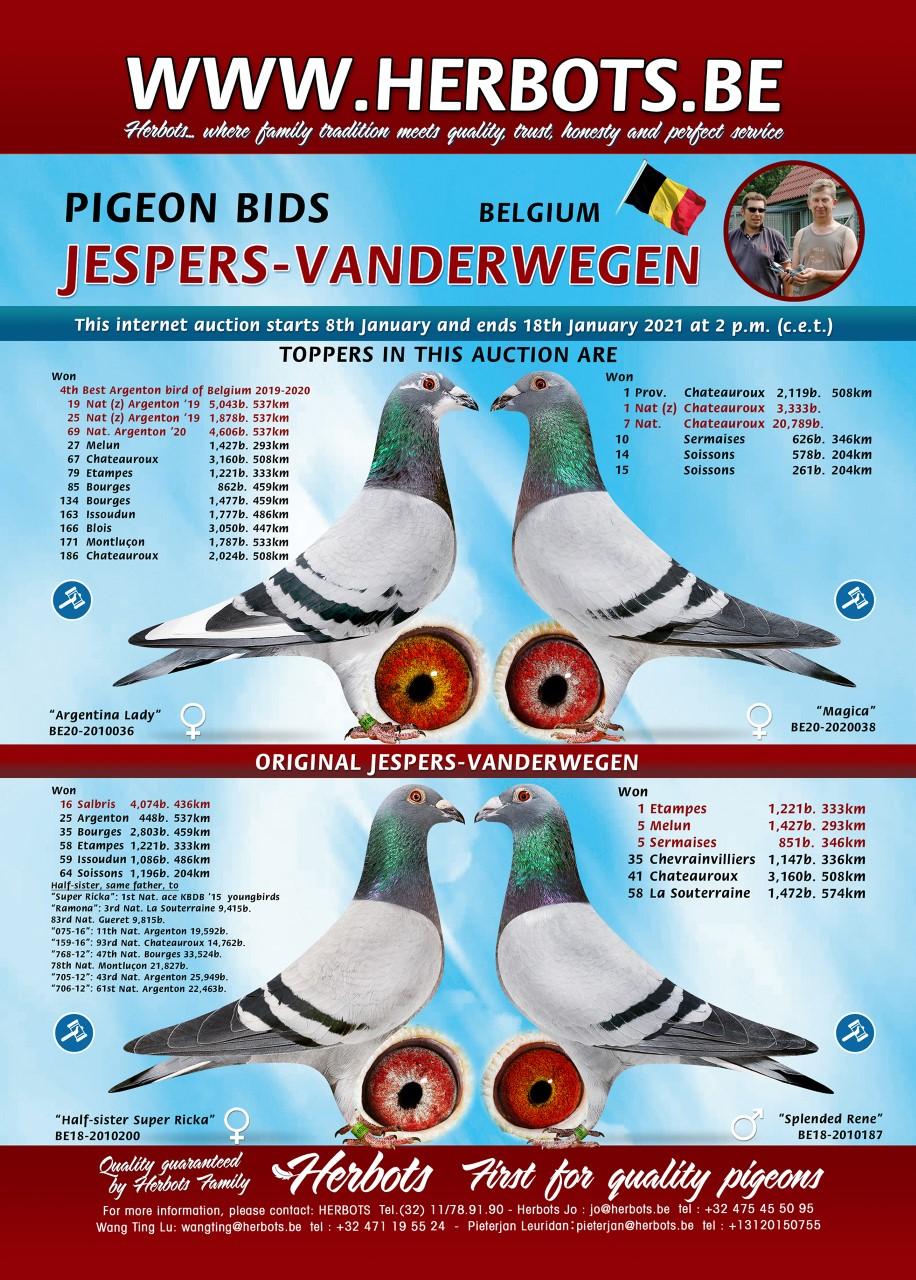