The opportunities in pigeon sport are there for everybody! This was proven once again during the (inter)national race from Agen for old and yearling pigeons. It promised to be an easy smooth race with the pigeons being released in good conditions and the weather being good all along the flight line.

The wind direction was focused on the fact that normally the top birds would fall in the western part of the country.... and so it happened!

"The International of Georges was ready!
Georges Vancraeynest, a 66 year old "farmer at rest" from Klerken (part of the municipality of Houthulst) is since Saturday evening the proud owner of the 1st international Agen old birds and also the fastest pigeon of all participating pigeons internationally (33.615 pigeons).

His "international" as he will more than likely go through life gave everyone the slip and with a minute speed of 1,353 metres per minute this blue cock had a nice lead on the 2nd pigeon.

The pigeon was ready.....Georges however not.....
Farmer at rest....is probably an expression that does not make much sense. A farmer probably never rests. Georges and his wife were no exception. For years, they ran a mixed farm and now they only keep animals for fun. Sheep, chickens, cats, pigeons, just because they love animals and have enough space to house them.
Georges says he is not in a card-playing or petanque club because he prefers to work with his animals in his yard.
So it was last Saturday when he went to fetch some food from a friend for his team of cats that roam the yard. He thought he had some time before the pigeons from Agen would show up.  But then he got a phone call from a good friend who said that there were already pigeons and that he had to return home.
And so he found his 3 year old cock on the loft.  His pigeon arrived at 16.22h and was reported at 16.35h. Everything was in order to win the prize.  Everything was in order to get the victory palm to Klerken!

Small and fine
A true hobbyist with a great love for animals, that is how we could describe Georges. His colony is small and annually about 60 youngsters are ringed and he plays with 28 widowers (old and yearlings).  His preference goes out to the heavy middle-distance, but regularly he "tests" pigeons on the middle-distance and the heavy-distance as they say.
So also the pigeons for Agen. Almost all of them (6 basketed and 4 prizes national) have some long-distance blood in their veins.
So also the winner, which is in fact the result of a co-breeding with our friend Joos Pasquinel from Houthulst. The father of the winner is a pigeon of Joos who in his turn descends from a long distance pigeon of Freddy Deketelaere from Eke-Nazareth.  Freddy is a renowned very long distance racer with mainly pigeons of the variety of Willems A. from Eisden.  With a 1st national Barcelona hens on his record of achievements besides many other exploits in very long distance, Freddy has the necessary power for this work. Years ago Joos Pasquinel bought some pigeons from Freddy and a grandson of one of these purchases now flies the 1st international.
The mother of the winner is a Dutch hen from Frans Van der Zanden from Duizel with especially Jellema, Beens, Van Geel and Vander Velden in the blood stream. To express it in percentage terms, the winner is a 75% heavy middle distance pigeon with a dash of heavy middle distance.   The father of the winner also won with Joos Pasquinel the 1st prize from Bourges from 618 pigeons.

The winner himself also flew a nice number of prizes and was certainly not a one-day bird.

This list is now completed with 1st local, 1st provincial, 1st national and 1st international Agen for a distance of 802 km and the fastest of a participative field of 33,615 pigeons. A splendid performance and a wonderful victory!

The blue cock is of medium build, with a strong carcass, a beautiful wing and a striking eye.  Also a wringer in the hand.
He was raced on classical widowhood and the care is correct but basic. Georges has a good eye when pigeons are healthy and stays away from all kinds of gadgets.

Georges also likes to mention that he has a pigeon on his breeding loft that won Barcelona three times in 1/10.

It would not surprise us if Georges, with a healthy ambition, takes his chances on the heavier flights, knowing that this can lead to unique experiences like this victory.

In the meantime, we can enjoy the many visitors and the sympathy of our pigeon-friends with a nice cup of coffee and a good glass of wine.

Congratulations from the Herbot team! 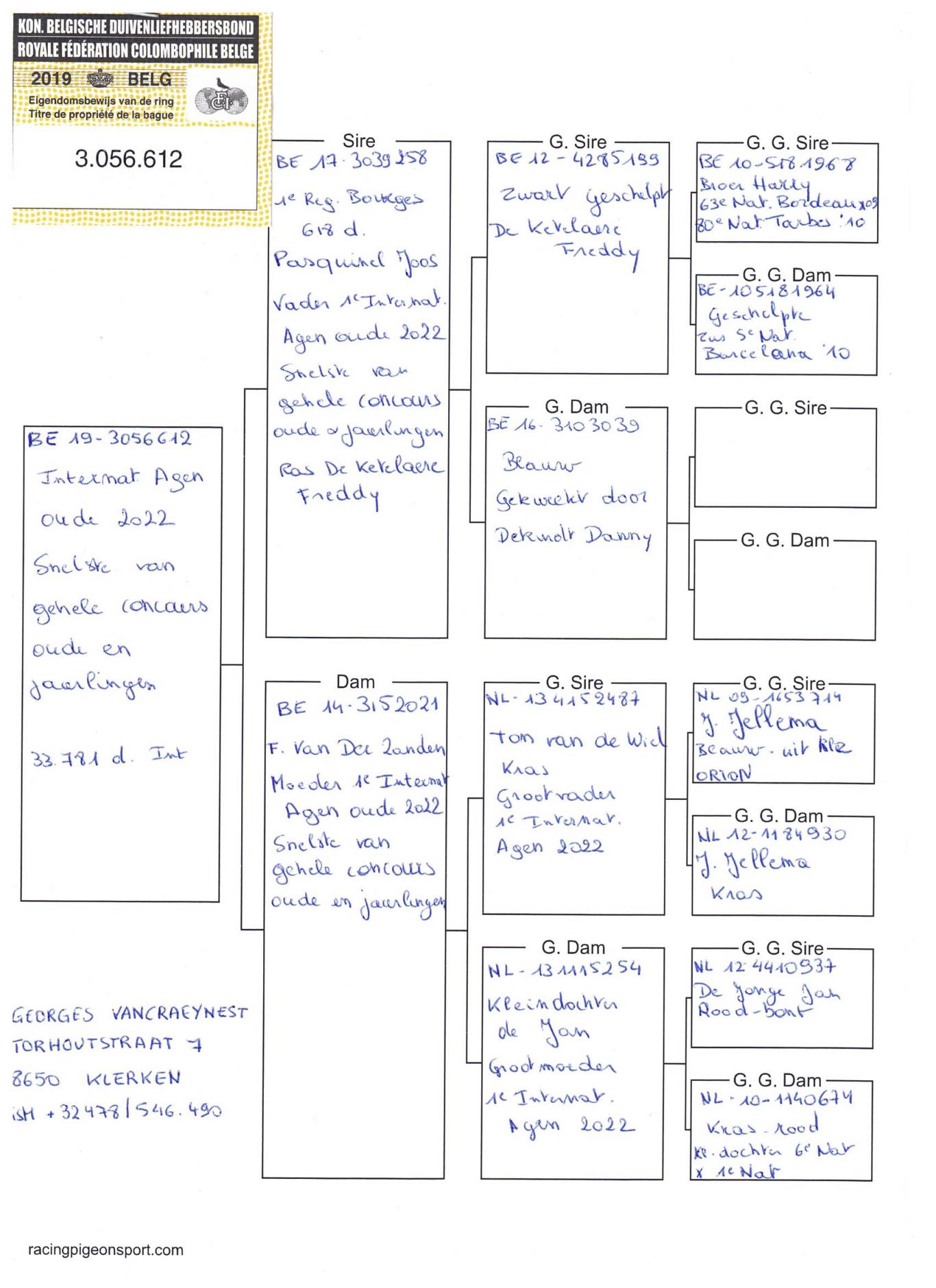