Lille: We are convinced that many fanciers were surprised when they clocked their Valence racers. As the pigeons from the middle distance and greater middle distance didn’t make 1400 m/m the 1st Valence racer went over this speed without a problem. This was also the case at the national winner De Weerd-Berckmoes out of the Antwerp village Lille. Eric Berckmoes explains: “We basketed 3 pigeons on Valence, it wasn’t a long distance race that was marked in fluorescent on the calendar which says enough, but we try to get as many points as possible for the general championship of Union Antwerp and that’s why we need to participate on every race. I was on the phone with a friend when a pigeon came in. First I thought of a youngster out of Melun but I saw that this pigeon didn’t go towards the youngsters loft but direction old and yearlings. With the phone on my ear I went towards the loft my friend told me that I had the 1st National Valence. A nice anecdote to a beautiful story.”

Eric continues telling smoothly: “Before we raced in Brecht but a double theft made that I stopped racing pigeons. In 2014 I sold all the pigeons and together with my wife Greet and daughter Zoë we looked for and found a new house in Lille. I worked as postman (a profession I loved to do) and had pigeon sport as a pure hobby. Despite the less motivated pigeon game a few nice victories were set. Everything ran smooth and well. Until 2019 when Henk de Weerd knocked at my front door. Henk only had one question whether I was interested to take care of his pigeons in Breda and at the same time race under the name of Nicole De Weerd-Berckmoes here in Lille and do it in a fanatic way again. A question I had to sleep over for a few nights, but eventually said yes. With a fresh portion of enthusiasm and motivation we started and in 2020 we already became 1st Provincial Champion KBDB Long Distance, 2nd Provincial Ace bird GMD youngsters, 3rd General Champion KBDB Antwerp and 4th National Champion KBDB MD youngsters.
The season of 2021 was started off with a group of 215 old and yearlings. These are being raced on total widowhood. Before the start of the season they could breed during 5 days and were placed on the widowhood system afterwards. The cocks and hens train once a day and are being fed by feeling from light towards heavy. Both at basketing and arrival they get Belgasol in the drinking water. In Spring we treated during 7 days with B.S. in the drinking water.

Let’s get back to the national winner Valence. As preparing races he got 2 x Quievrain, 2 x Noyon, 2 x middle distance, Vierzon and Bourges. During the 2 weeks he stayed home he didn’t had anything else to do then get an extra breeding box and an extra lover. Apparently more than motivation enough to leave all the other participators behind.
When we got to see “Herbie” we were impressed of how good he still looked after such a race. “Herbie” is of the average type but with a very strong carcass. Valence was his last race as his box on the breeding loft is already set.

Henk, Nicole and Eric…we like to wish you a lot of success further on from the entire Herbots team. 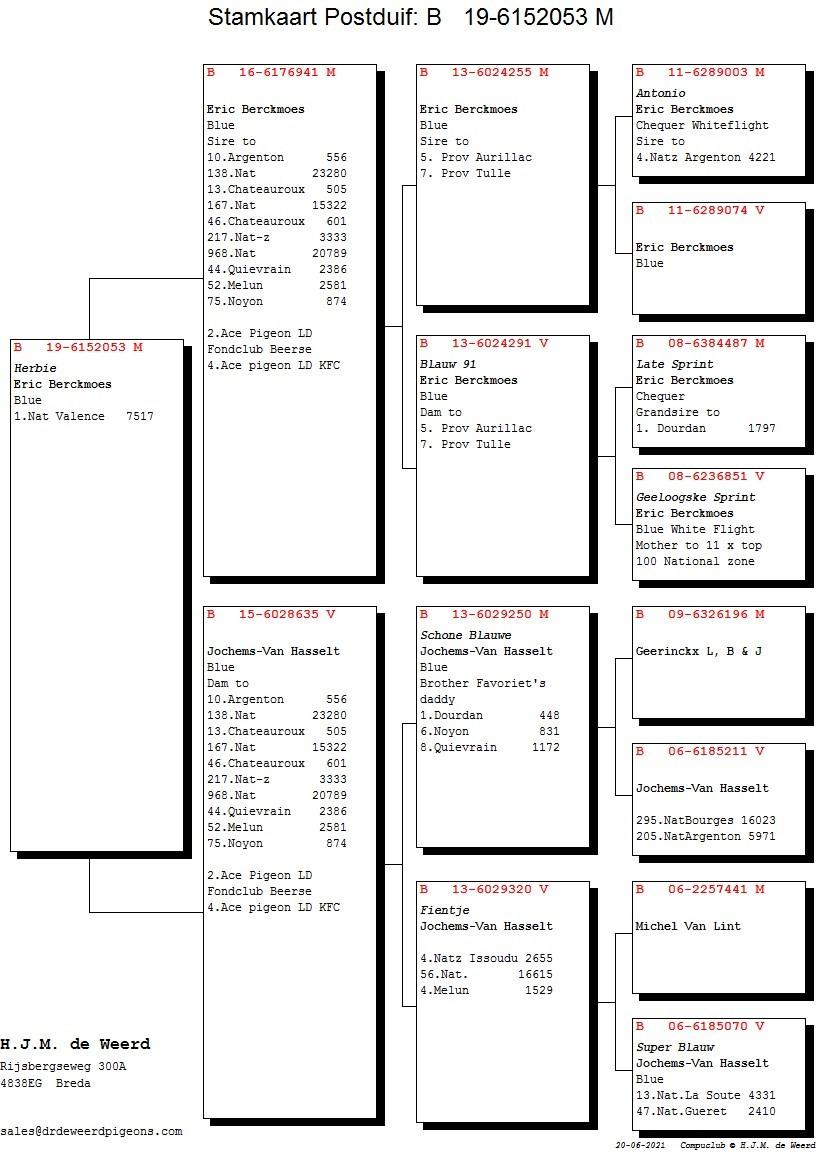