Lummen: With Tulle national old birds it is for Tony Martens from Lummen already his 3rd national victory he can add to his palmaris. After Bourges ’96 and Bourges ’18 it was a hit in the rose again the past weekend. With a clocking at 15h11m and 47 sec for a distance of 655km his winner made an average speed of 1374,79 m/m. She won in the sprint against the pigeons of Veulemans-Perilleux (Tienen – 1373.56 m/m) and Van Wezer Philippe (1369.70 m/m).
Consequence…nothing but happy faces in Lummen.

When we ask to the base of the Martens colony we get as answer “Soontjes duiven”. Tony explains “I only started racing pigeons in 1993 and in 1996 I participated for the first time to a national race namely Bourges and I win the 1st National immediately ! Due to this victory I got in contact with the Herbots family and via them the first long distance pigeons came onto my loft. A pigeon out of the “El Torro” (2476734/1996) became my basebreeder. Via Jos Herbots I got Antoon and Luci Vanderwegen pigeon with a super breeding hen amongst them namely 5153271/1999. Next to this one we bought pigeons at several different fanciers and I was successful with pigeons from Daniel Aerens (Drongen), Luc Smets (Bertem), Georges-Henri Bodson, Alex Rans (Herent) and Hubert Vanherck (Borgloon).
Pigeons are my hobby and I race all races and with all races I really mean all races, this on the short distance, middle distance, long distance and extreme long distance. I have a loft for each discipline and no race can be organised without me being at the basketing table. The season was started off with a group of 10 pigeons for the short distance races, 18 pigeons for the middle distance races and 21 couples for the longer races. The short distance and middle distance pigeons are being raced on the classic widowhood, the other start their season according the total widowhood system and half way the season they will be raced on the nest game. Pigeons on nest train less and that’s why dares to toss them on a regular base at 40km.
Qua system everything is being kept as simple as possible. During the racing season there is only one kind of mixture on the menu and this is Sports mixture. This is being given from arrival to the next basketing. Electrolytes at arrival and during the week vitamins over the food on a regular base and this is it. Medically he treated them before the season against trichomoniases. He didn’t give anything yet against ornithoses.

The national winner is a marvellous hen with ring number B17-5000660 . “She wins on her first nest ever’ starts Tony the story and while he speaks these words he saw in our face that we hardly could believe it seen that she is from the birth year 2017. ‘To be clear…Mila is a late hen from 2019 but ringed with a ring from 2017. In 2020 she wasn’t paired up and only trained very well to have a nest now on her first long distance race and gave us a top result immediately. Her nest position was a just hedged youngster on the day of basketing. Despite the fact that she had to be super motivated she did a few rounds when getting home and stayed a bit on the roof as well before coming in. Taking all of this into account she could have been clocked a good minute earlier.

Tony...enjoy this new national victory and go for number 4 !
Congratulations from the entire Herbots team 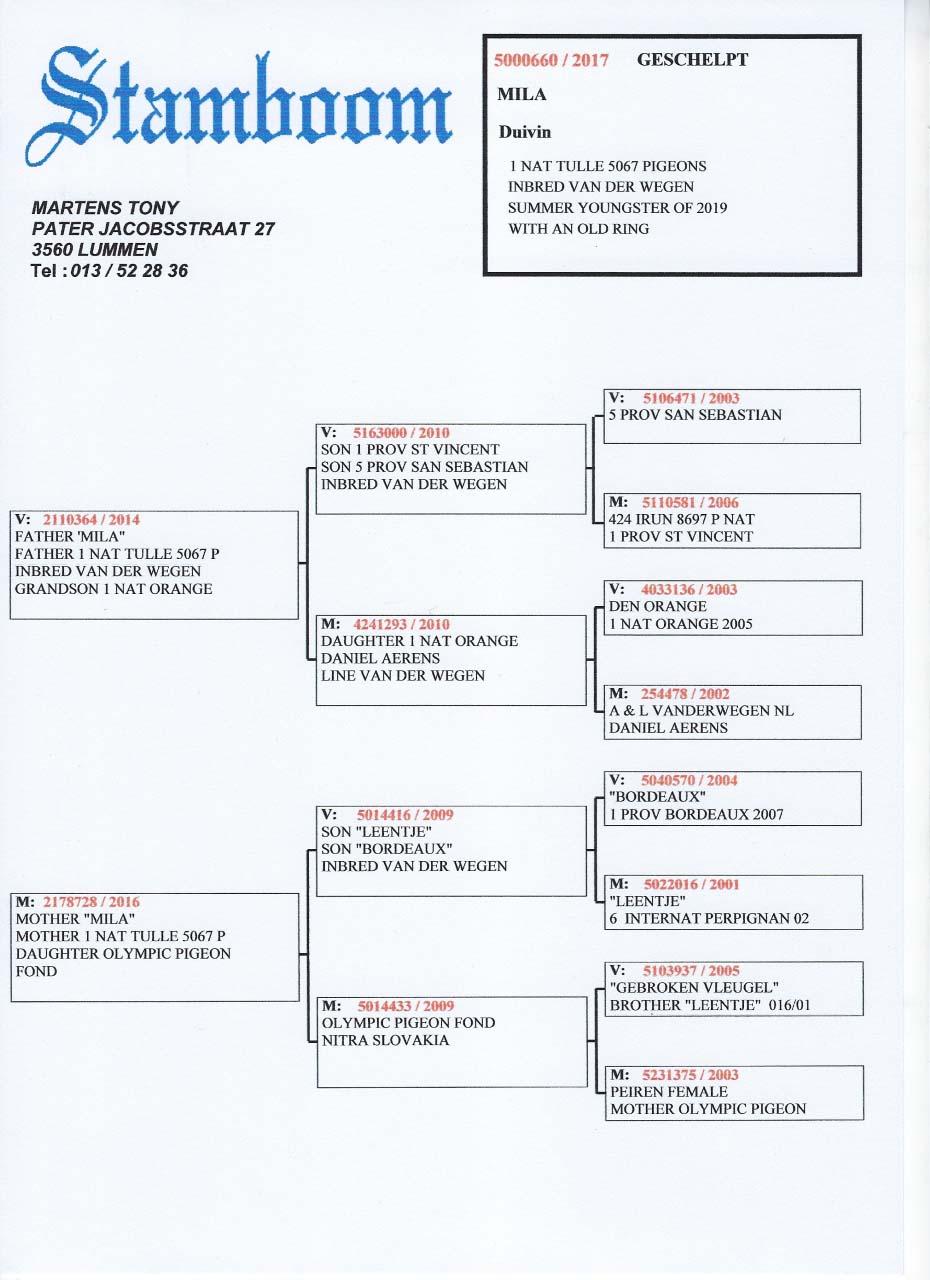