Audregnies, a district from Quiévrain, the legendary release site for pigeons is the hotspot for the national race out of Pau. A small, well-formed hen, soft feathers and a shining eye won the 1st international extreme long distance race of the season of 2021.

The race out of Pau is one that shoots out between the traditional long distance races. Many questions at the start of the season of the extreme long distance races such as : are the pigeons ready, is the condition already set for such a heavy mission, and so on ?

In the past, mostly older pigeons with a lot of experience were basketed on this race, but due to the evolution within pigeon sport more and more younger pigeons have to trial by fire.

This isn’t a test piece for David Flasse

David Flasse, 46 years young, didn’t have his test piece what the national victories is concerned. In 2014 he could already taste this special feeling with a 1st National Montélimar, a nice race out the races of the Rhône valley.

After a break of a few years he restarted in 2019 with the name of his son Samuel (20y). Samuel isn’t that fond of pigeons and the care of the pigeons is there for David who is being supported by his girlfriend Sybille (to whom the winner is named after).

“With the help of friends”

Can be taken literally. David and Georges Surain (Hautrage) are since years the best (pigeon) friends. Georges (61y) a man of many pigeon wars has placed a lot of nice results on his account. He gave in 2019 the youngsters to David for his restart and it are these pigeons that make the beautiful weather over there in Audregnies.

In a nutshell we can state that they breed together and race and support each other and motivate where necessary. It is for both of them a special event to win the national race out of Pau. The joy was clear to see on both of them when we visited them and posed with the justified proud for the photo.

The lofts are very simple and basic, but healthy and spacious. The season of 2021 was taken on with 28 cocks and 16 hens. The hens reside in a small loft and are being raced, if possible, as lesbian couples. For some hens this is easy, other stubborn ladies can’t be seduced. This is also the case for ‘Sybille’, she can’t be seduced by another hen. She only has her shelf to sit on as property and this was clearly enough to motivate her and win the national victory.

As preparation races the pigeons had this season La Chatre, Chateauroux, Vierzon and Bourges.

David is of opinion that her nest sister is better, as she showed herself as yearling with a 66th National on the really though Aurillac in 2020. ‘Sybille’ came in on this race as the 385th National and also won on Bourges a 43rd against 654 pigeons and a 69th against 633 pigeons.

Now she wins a 1st National against 3,600 pigeons on a very though Pau, who was signed by a release closer to home (Mont de Marsan) due to the bad weather conditions in the area of Pau. She was clocked at 17h21m3sec and got an average speed of 1,297.95 meter.

On the International she will normally be the 5th which is a super result for a two-year old pigeon.

Her origin (so she is a direct one from the breeding loft from Georges Surain from Hautrage) are the pigeons of Petteau-Choquet on fathers’ side (an old strain where a lot of fanciers had successes with). Her mother is a sister to ‘Miss Bergerac’ out of the strains of Crier-Ruelle and Thierry Masure from Herinnes. She has the blood of the 20th National Marseille, 37th National Narbonne, 2nd National Pau, and so on…So it isn’t remarkable that she could finish such a heavy race marvellously

At our visit we could see the parents of the winner and both are very beautiful pigeons, well-formed and with a shining quality.

Pigeon sport in all simplicity

Which makes this victory nice is the fact that pigeon sport is being practised in all simplicity, simple, descent lofts, a good but not a complicated care and above all a good cooperation between the 2 friends, David and Georges, who enjoy this victory to the fullest ! 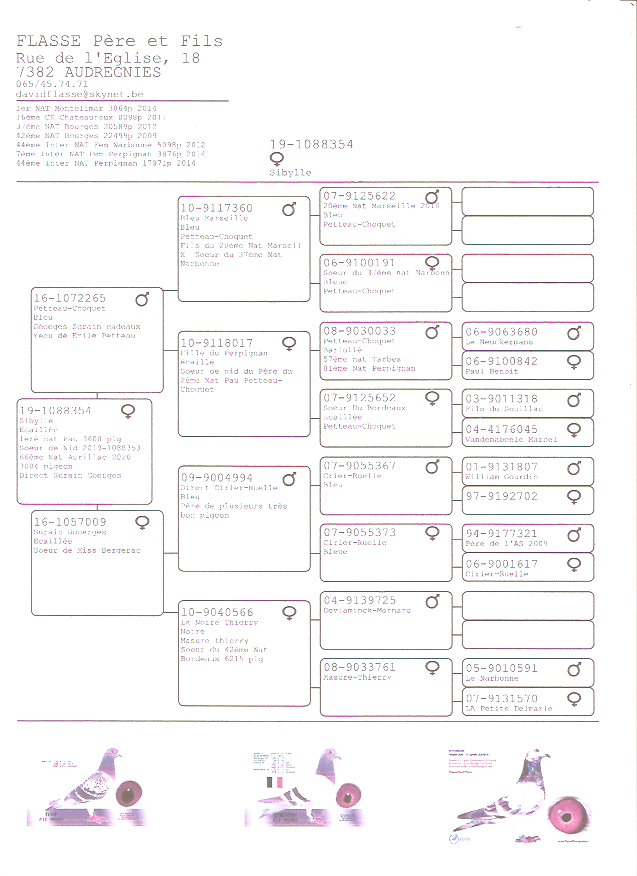