To be honest, the place “St. Marie Sur Semois” isn’t that familiar and we had to have a look on the internet to see which direction to drive to be able to congratulate the national winner of Montélimar.
After a few seconds we knew that we had to go to the south end of Belgium, province of Luxembourg. After a long drive of more than 2 hours, where we had to defy a few heavy thunderstorms, we were in a big and beautiful garden of the Burniat family. Boris, 35 years young and teacher as profession, had a bit of a double feeling with this national race. On one hand really happy with the national victory and a 2nd pigeon on the 11th national spot, but on the other hand really disappointed in the course of the race where only 9 of the 20 basketed pigeons on Montélimar are home.

As you can tell, the Burniat pigeons can cover all distances. To be able to do this Boris invested in pigeons from Gaby Vandenabeele (Dentergem), Engels J. & J.  (Putte), Morrier Robert (Luik) and for the more heavy work he went to Georges Carteus (Ronse), Yvon Deneufbourgh (Estinnes) and Etienne Devos (Deerlijk).

With a team of 90 widow cocks he competes yearly. The widow cocks only bred during 7 days before the start of the season. The game with the widow cocks is the main goal and Boris does everything to get nice results with them. Before the season starts Boris goes to a specialized vet and on his advice the pigeons are being treated or not. This year they were treated both against trichomoniases and airway infections. After this no cure has been done but a monthly check up is on the agenda.
Along the races the widow cocks are being motivated or not. Under motivation they mean showing the nest dish or their hen. Also the period of how long the hen is being showed both before as after the race, is been done on feeling. Feeding happens as on many places from light to heavy and for the rest very regularly vitamins and brewers’ yeast over the food.

And then we’re talking about the national winner Montélimar. With an average speed of 1180,71 m/m he beat the pigeons from De Smaele Michel (Bracquenies 1179. m/m) and Dewolf Olivier (Besonrieux 1178.44m/m). “Seen afterwards my winner couldn’t lose more time anymore” tells Boris “we saw him coming from far away and needed 3 big rounds to get down and then he even fell on one of the aviaries which made him lose even more time. Typical for him as when he is in shape he is also the last one to get in after a daily training..”
Thee “Zwarte 034” is of the smaller type, a wringer by hand. This national victory wasn’t a lucky shot as he already won :

Boris, once again a big congratulation from the entire Herbots team and do enjoy this unique result the fullest. 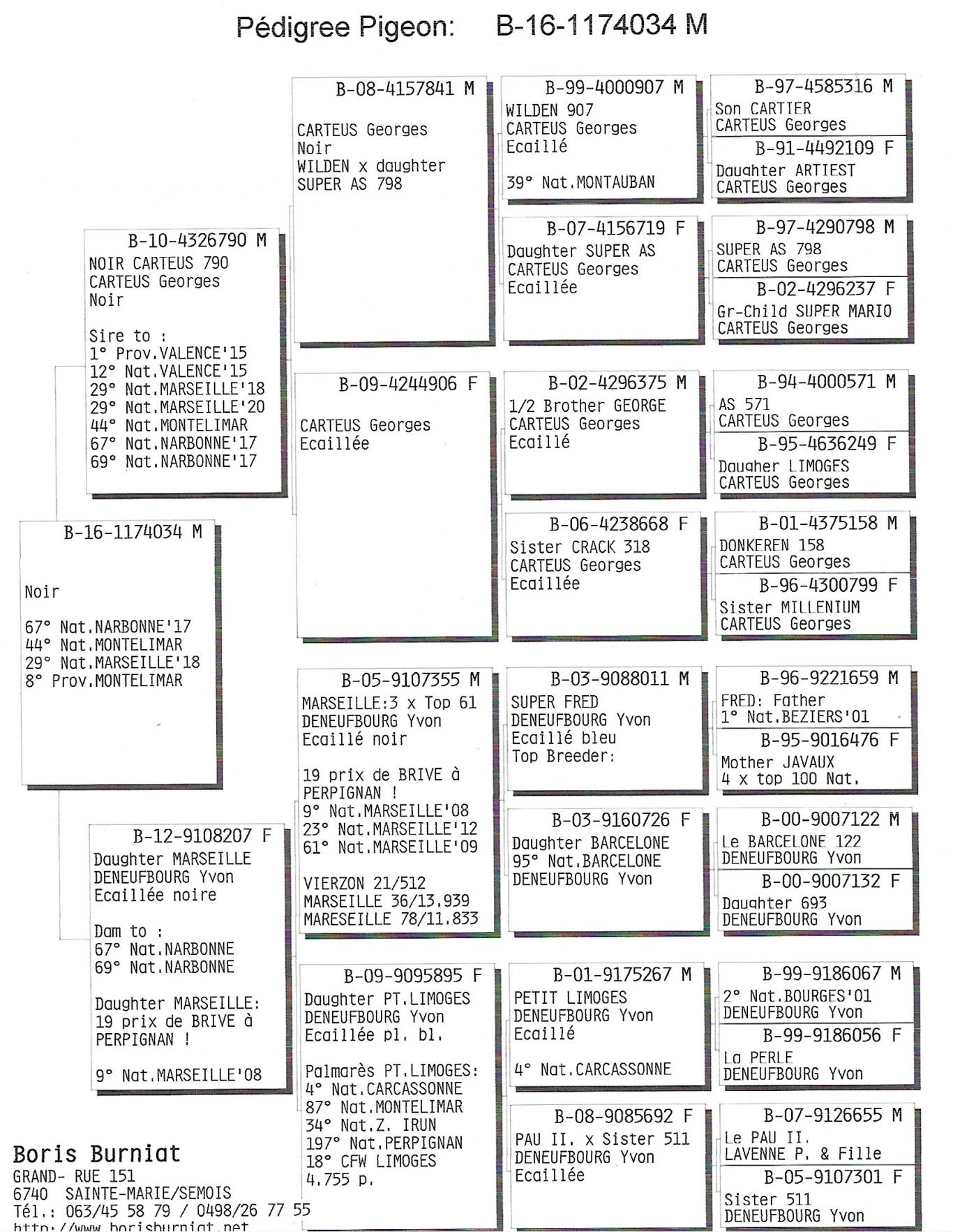