Berlaar. On the list of result you find the name Wim De Troy but in fact you have to name in one breath his wife Marianne and son Steven. Wim has worked really hard his entire live and this is something he feels badly in his back now (already had 3 surgeries). Maintaining an extended colony asks a lot of time and energy. That’s why he is more than happy that Steven, who works early and late shifts in the hospital, spends all his spare time with the pigeons and that M        arianne keeps track of the administration perfectly.
In 2016 they won their first national race namely La Souterraine against 16,613 youngsters and that same year they became also 1st National Champion KBDB Long distance youngsters. Thanks to the wonderful result of “Iron Lady” (B17-6050011) a second national victory was noted down. “Iron Lady”, a marvellous blue white pin hen, beat with an average speed of 1322,23 m/m all other 9,859 old Montluçon racers.  The top result of the past season was set on Argenton National. Against 23,280 young pigeons the De Troy family took the entire stage. Indeed, 1st, 2nd and 3rd National. Wim still enjoys fully this result. The hair on his arms rise when he thinks about those arrivals.
And then the past weekend…Limoges national…in Berlaar they had 26 pigeons in competition and when they saw Gino Clicque at the top of the announcement list of the KBDB, they thought they didn’t have a chance as the pigeons where arriving fully in the western part of Belgium, but this was without taking into account the force explosion of the blue cock “Wout”. “Wout” (B20-6181006) blew with an average speed of 1372 m/m all 16,204 Limoges racers away. The “Numero Uno” from this Limoges race has a loft in Berlaar!

When you live in Berlaar you don’t have to drive far to be able to get something good. This is how Wim did his ‘shopping’ at Jos & Jules Engels, Van Eynde – Goovaerts, Jozef & Swa Goovaerts ( De Kaasboer ) and Willy Daniels. Especially the strain of the “De Keesboer” (via Jozef and Swa Goovaerts), the “Marianne” strain (2nd  Nat Ace bird Greater Middle distance raced at Victor Danneels ) and the “Boxer” strain (Rene Renders) are the strains that are giving their genes on really well.

“Wout” is a marvellous cock in your hand. All feathers on a strong muscle system. Despite the fact he looks quiet, he can strike hard, in other words, we are dealing with a guy with character.
“Wout” is part of the widowers team (hen stays home). The team didn’t do a winter breeding but and were prepared quietly for the season. As youngster ‘Wout’ only saw the releasing point of Noyon and this year he got to deal with the nationals. In a matter of food we have our own mixtures from the company Hoebrechts (Heers) and in a matter of side products we draw the card of Aidi.
Medically seen we are quick to respond and the vet is being visited on a regular base. 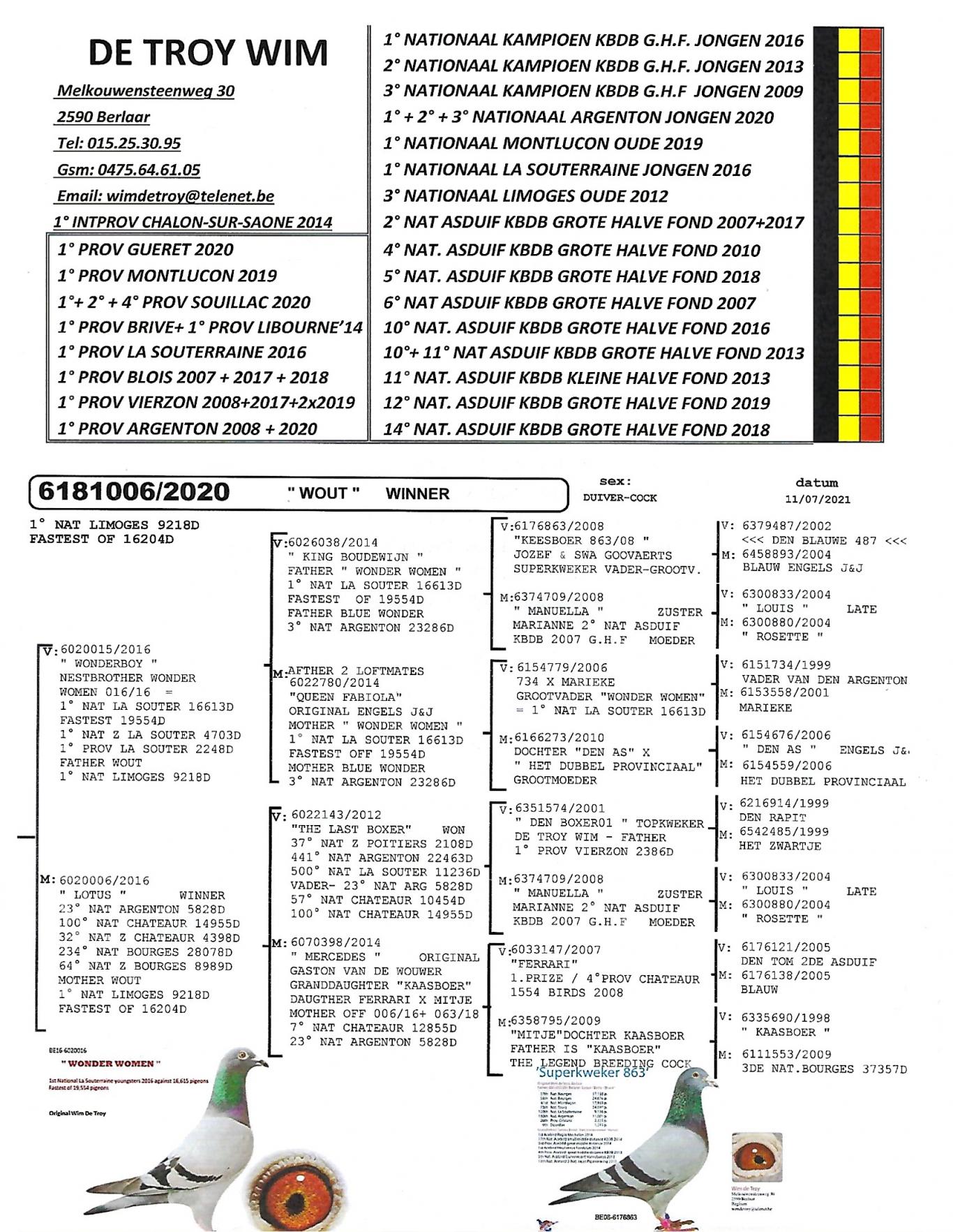