Paal: Who doesn’t want this as pigeon fancier…winning national Bourges youngsters! It is and stays the ultimate dream from every middle distance racer. A dream that collapses each year for many but is a reality for one person each year. It is a victory that carries on the rest of his live and is never forgotten by fellow pigeon fanciers.
This year it was the dream from René Geukens from Paal that came true. His “Anna” (named after one of his grandchildren) got registered with an average speed of 1612.22 m/m and took on the young pigeon from Weytjens Theo (Zutendaal, the national winner of last year, 1598.73 m/m) and the young pigeon from Bosmans-Leekens (Beverlo – 1596.63 m/m).

Who drives on to the property from the Geukens family sees it right away…a perfect garden, same pigeon lofts…everything is very clean…an oases of rest and what a good feeling this must give as pigeon fancier to be able to watch pigeons arrive in this Limburg paradise.
René started in ’76 on his own with pigeons. His father was also a fancier but not that fanatic and didn’t keep him awake if the only his name was mentioned on the results list with his address. A lot changed for René when his friends Gilbert and Henri Van Loo brought him a basket full of youngsters. The result went up high but as René was a referee (he did this during 27 years) he only raced youngsters during this period. A lot has changed in the meantime, also the base of the colony can be brought back to the names of: Dirk Van Dyck (strain “Olympic Niels” and also logically “Di Caprio”), Danny Van Dyck (Pulle) Michel Eyletten (Diest) and Markus Bauer (Lochristi where he has a co-breeding arrangement with).
René breeds on a yearly base about 60 youngsters and at the moment he still has 35. No old pigeons but 2 yearling pigeons or in other words he draws the cart of quality instead off quantity.
Beyers mixtures are being given daily, only the last two days before basketing it is “Turbo” from Matador. In a matter of side products they make a lot of use of  Birdy Health and Birdy Sil-Plus in the drinking water.
Youngsters can’t sit still and when the weather allows it they are being tossed two to three times in Tienen (35km). René always tosses them and his wife Godelieve gives them a warm welcome home.

The youngsters are being raced on the sliding doors system and seen ‘Anna’ didn’t have a cock, René tried to give her one. A breeding cock was being placed on the loft but he seemed to be to ‘heavy’ for her. Another hen had more interest in him and ‘Anna’ kept an eye on the spectacle from on her shelf. Apparently this must have stimulated her to go the fullest. ‘We saw her arrive’ tells René ‘in fact not out of the right direction and that’s why we thought she was a late one from Soissons. It was surprising when we saw she was a Bourges racer. Everything was done as it should and from the moment our name was on the KBDB – online our phone didn’t stop ringing anymore.

“Anna’s” future probably won’t be in Paal but at a new owner. The coming days this will all be concretised.

René once again congratulations from the entire Herbots team and do enjoy fully of it. 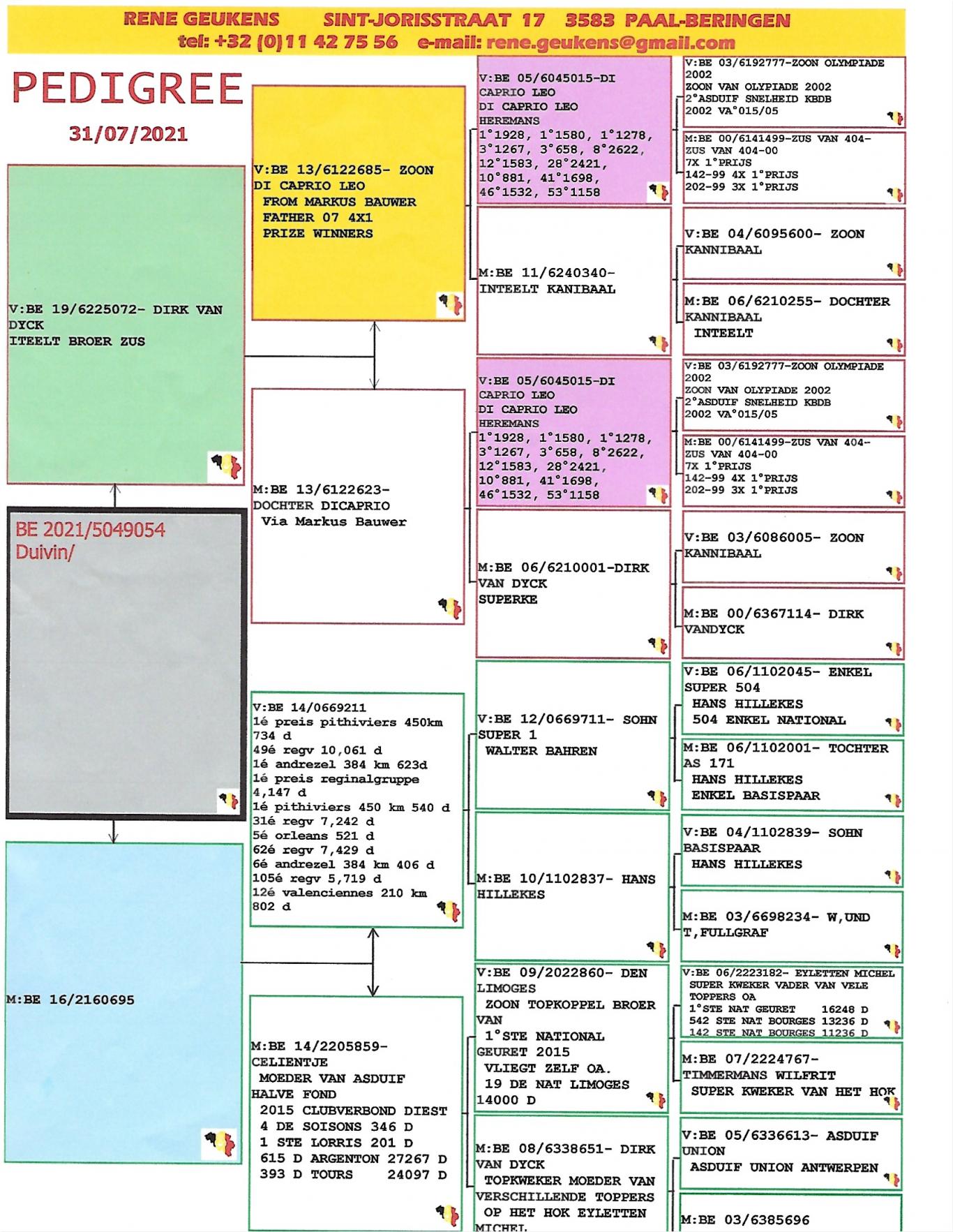