Niel-bij-As: It is very clear that the Thoné family is very pleased having an important victory that they can add to their palmaris. Almost weekly 1st prizes fell out the Limburg sky (the count is at 80 victories (including doubles) for 2021) which made the hunger for a national victory became even bigger. But in Niel-bij-As they know better than anyone else that everything has to be in your favour to win a national victory. The condition was already good, than it was waiting for the correct weather (read wind) and the Thoné team knew they would be present. Jos decided together with his sons Xavier (who is now also fully occupied with pigeon sport) and Maxim to basket 30 pigeons for Bourges/Vierzon, but as further the basketing time came by the more pigeons were placed in the basket. In the end it became 44 basketed pigeons. With them also ‘Nina’ who into the basket as 2nd signed and took the lead 2 days later by winning against 8,409 old pigeons but also became the fastest against all 39,068 Bourges racers.

We got the luck to go and admire “Nina” and to be honest we are more than impressed. ‘Nina’ is one block of dynamite…strong muscles accompanied by a thick layers of feathers and for those who like to see a nice eye…well, you get lost in ‘Nina’s’ eyes. Pure class.
This all is also accompanied by a pedigree with nothing else than ‘big’ names. The father is a son to “Goudhaantje” (Rudi Diels) x “Olympic Rosita” (Van den Bulck). Mother is a daughter “Kittel” (Van de Bulck) x “Avrilla breeding strain”.

The story behind the victory

We’ve said it more than once. Behind every victory is mostly a story about super motivation, this was also the case for ‘Nina’. Jos starts telling ‘Just as all her loftmates she is being raced on the total widowhood system. ‘Nina’ her partner is ‘Remco’. ‘Remco’ who isn’t a pancake either became in 2019 12th National Ace bird Greater Middle Distance KBDB. The entire season ‘Nina’ was on the middle distance and ‘Remco’ did the greater middle distance or in other words ‘Nina’ always came home first and needed to wait long to see her husband. Experience taught me that it doesn’t bother a hen that much and starts to look for another partner more quickly until her own partner arrives. But now…“Remco” was left behind during the season and was luckily called in by a German fancier. We contacted Ludo Wille and Ludo who works a lot in Germany for the Beyers company brought ‘Remco’ home. So it was a few weeks that ‘Nina’ saw her ‘Remco’ and at basketing for Bourges there he was. She also got for the first time this season a nest dish and see…a super motivated ‘Nina’ did what we were working for the entire season namely winning that national victory against a mass pigeons as the fact remains that she was also the fastest against all the 39,068 Bourges racers, which also means a lot to us.
Mentioning in between…in all the hectic was also ‘Remco’ basketed. Believe it or not but you can find his ringnumber at the 30th place on national level.

The Thoné system has been talked about in several different articles and seen that we only want to highlight the national victory we won’t go into that any further. It isn’t possible either to describe the Thoné system in a few lines but we like to mention that they fully trust in the Beyers mixtures (were they commercialize the Thoné mixture) and the side products from Pigeon HP. In a medical way they contact vet Norbert Peeters and Vincent Schroeder.

Team Thoné…enjoy this unique result and a lot of success on the further races from the entire Herbots team. 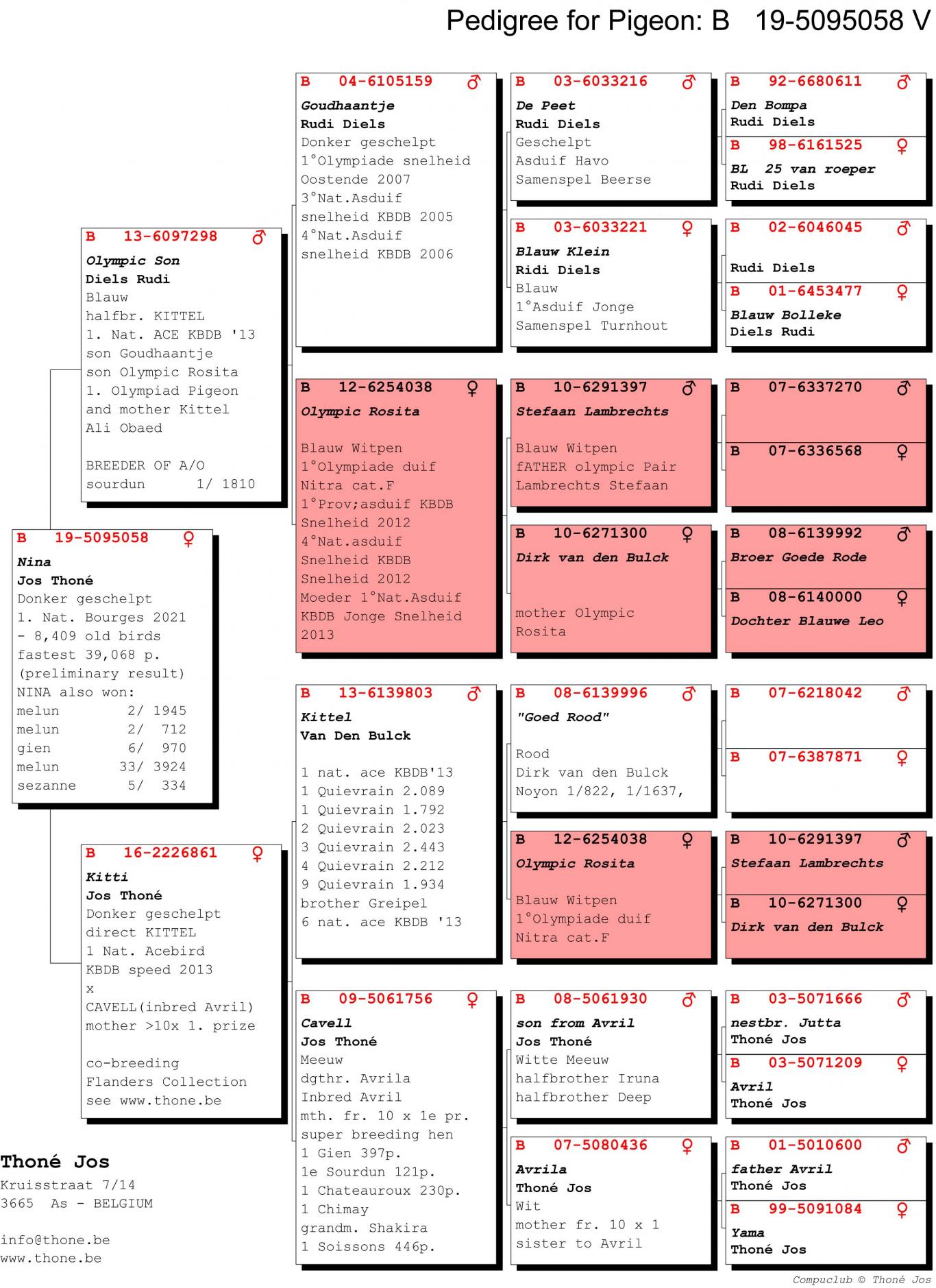